He was ecstatic that he was about to go inside the artistic masterpiece of a museum for the first time off work. He used to be the manager of the museum but he never had the time to admire the paintings. The black pavement leading up to the museum had numerous cracks in it. The air was crisp, cold and it was dark outside. As he walked toward the glass pyramid he noticed that the grass leading up to the museum was well kept and was bright as an emerald.

Don't use plagiarized sources. Get your custom essay on
“ Visit to Louvre Museum ”
Get custom paper
NEW! smart matching with writer

With each step taken the wind blew more and more leaves off the large oak trees. His feet stepped on the crisp, crunchy leaves. The air smelled like a bonfire, which must have come from a faraway house. Finally, he reached the entrance to the museum. He was rather surprised that the door was open after closing time.

The museum was exactly as he remembered. The air was kept dry to preserve the paintings.

Proficient in: A Visit To A Museum

He walked down the stairs. Creak. Multiple security cameras were along the walls in the museum but he knew that nobody watched them all at this late hour. Several paintings had been taken away because they did not attract tourists. Looking across the grand gallery he saw the most iconic painting in human history.

The Mona Lisa. He did not like this painting because it hogged all the attention from tourists. He may very well have been one of the only humans to see the Mona Lisa without being shoved around.

The air was dry and it was difficult to breathe. Hardly any natural light came in and few lights were turned on. Upon reaching the Mona Lisa, he stared intensely. Looking closer he noticed things that most people did not. He found the letter S in her left eye and L in her right eye. The number 72 was under the arched bridge in the painting and the horizon was higher on the right than the left. Four circles joined together were on the woman’s attire. Hidden symbols. So many symbols were hidden in Da Vinci’s complex paintings that he did not understand. The glass covering the priceless painting was several inches thick. The parquet floor gave him the illusion of floating. After struggling to comprehend the secrets behind this masterpiece he stopped looking at it. “Next painting,” he thought to himself.

He knew that the painting of The Last Supper must have been nearby. Another masterpiece, even more symbols. Creak. Creak. He scanned the museum for the painting. There it was, in all its glory. This painting had similar security to the Mona Lisa. The oil painting showed the last meal that Jesus had with his disciples. Someone in the painting that he did not expect to be there. Mary Magdalene. He thought to himself, ‘Why is she at a dinner for the last meal between the disciples and Jesus?’ Jesus and Mary Magdalene formed a figure between them that looked like a v, the symbol of femininity. In history class, he was always told that The Last Supper was the introduction of the Holy Grail. He was also told that the Holy Grail was a chalice. That was a lie. There were no cups of any kind on the table in the painting. He thought to himself, ‘What if the Holy Grail was not a chalice, but rather something else?’ He got tired of questioning the meaning of art and remembered what he came for.

The inverted pyramids. Walking down the stairs he rubbed his hand along the railing. Smooth, soft, and sleek. Again, the stairs squeaked. The numerous amount of stairs felt like a descent from an Egyptian pyramid. This masterpiece of architecture amazed him. A glass pyramid came downwards from the ground above him and a much smaller stone pyramid, faced upwards, and came from the floor he was standing on. Between the two was nothing but a few inches of air. Dust particles were collecting on the stone pyramid. He noticed the air was more humid as there were no paintings to preserve in this room. These pyramids fused the blade and chalice. The blade is a symbol of man and looks like the opposite of a v (^), while the chalice is the symbol of woman and looks like a v. The stone pyramid formed the blade and the glass pyramid formed the chalice. He could see the starry skies through the glass pyramid, and remembered who he was, the last living descendant of Leonardo Da Vinci. 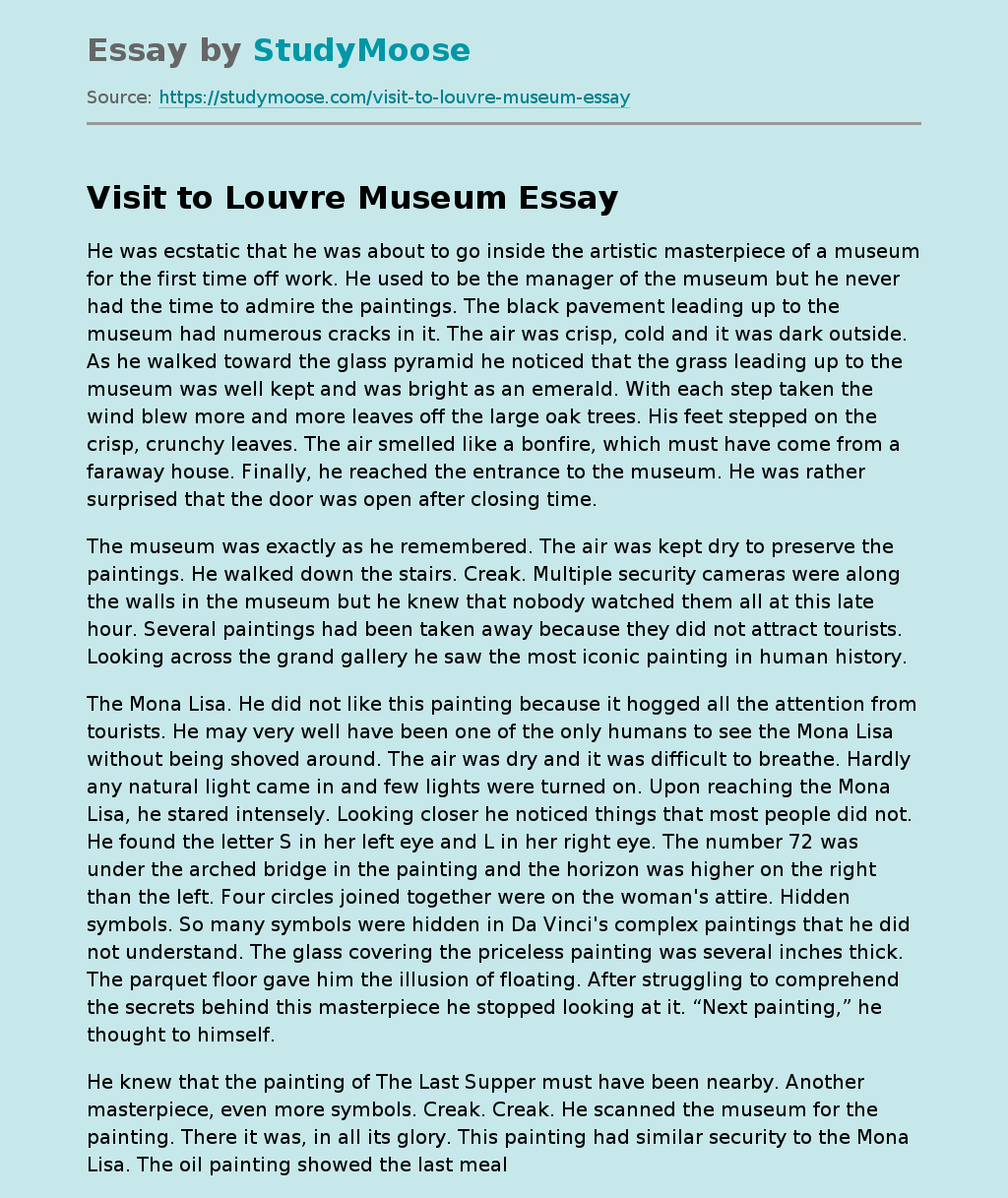