Rap music has become more of a distinctive music genre over the past few decades. Rap music and hip hop is only good for dance and for parties too. Sources of information that describe people growing oppression, and declining for advancement. Its sounds, images, and attitude consist of the people, races and cultures. There are many rappers in the business who use negative and bad language such as Grandmaster Flash, Run DMC, Public Enemy, Ice-T, N.W.A., Ice Cube, Salt ‘n’ Pepa, Queen Latifah, Wu-Tang Clan, and Snoop Doggy Dog.

Don't use plagiarized sources. Get your custom essay on
“ Violence in Rap Music ”
Get custom paper
NEW! smart matching with writer

Most of these rappers are the most influential and controversial groups in the history of African American rap music .The violence largely came from rowdy gangs in the audience.

The people of today should encourage them to stay in school and avoid drugs and gangs. The different clothing, jewelry, and hairstyles changed rapidly and often reflected most groups. Violent lyrics cause violent behavior. Rap music is an art form that reflects life.

Rap music created a commercial product. Between rap lyrics and violence they are overvalued. Hip hop is form of art and expression just as any of kind of music. When rappers rap they speak upon what happen in their life or what happen in the hood. In today society as black folks we are the most influence people of the race. Why? The beats, rhythms, and lyrics we listen to make us do what others do. The violence in rap music is increasing worldwide and the younger generation is affected by it.

The words rappers say make people out here in the world behave a certain way. Such as killing, harassment, bullying, and rape. The music is being criticized by the crime, violence, racism and misogyny. In the news everyday there is something a rapper says that affect the people. It is negative. Some of the music is a form of stereotypical. The way the rapper talks about the hood life, drugs, hustling, pimping, and shooting one another. It affects younger children and the way they will grow up. There should be more positive things going on in the music industry. In the industry there are some good and bad music artists. I believe in the late 80s their were some good music, now in my generalization the music industry is just all about the money life. It has a large in impact on the children today. Today all I hear about is the money, drugs, gangs, and clothes.

It hurt me that in today society we are just focus on who coming out or what’s coming out next. The rap music tell people how to eat, what to wear, what gang to be in, what to smoke, how to talk to women wrong. That should not be in the music industry. We should listen to things like school, education, and the good things to do. Violence shows the negative and wrong things. Violence is the genre’s primary commodity and it’s currently of choice. The lyrics that kids and adults listen to make them do the things that they never through they would do.

Teens that spend most of their time watching the sex and violence depicted in the gangster rap music video are likely to practice this behavior action in real life. Rap video influence behavior across other racial, gender, and social lines. Rap music is the way of expressing the way life is on the streets. There are a lot of people who can tell their life stories because most of them went though things like that. Some people get upset over the things like what’s hood is doing the most. Beefing up security and police for hip-hop and rap events. The way things happen because of the economic system makes people focus on the music to keep the problems away. 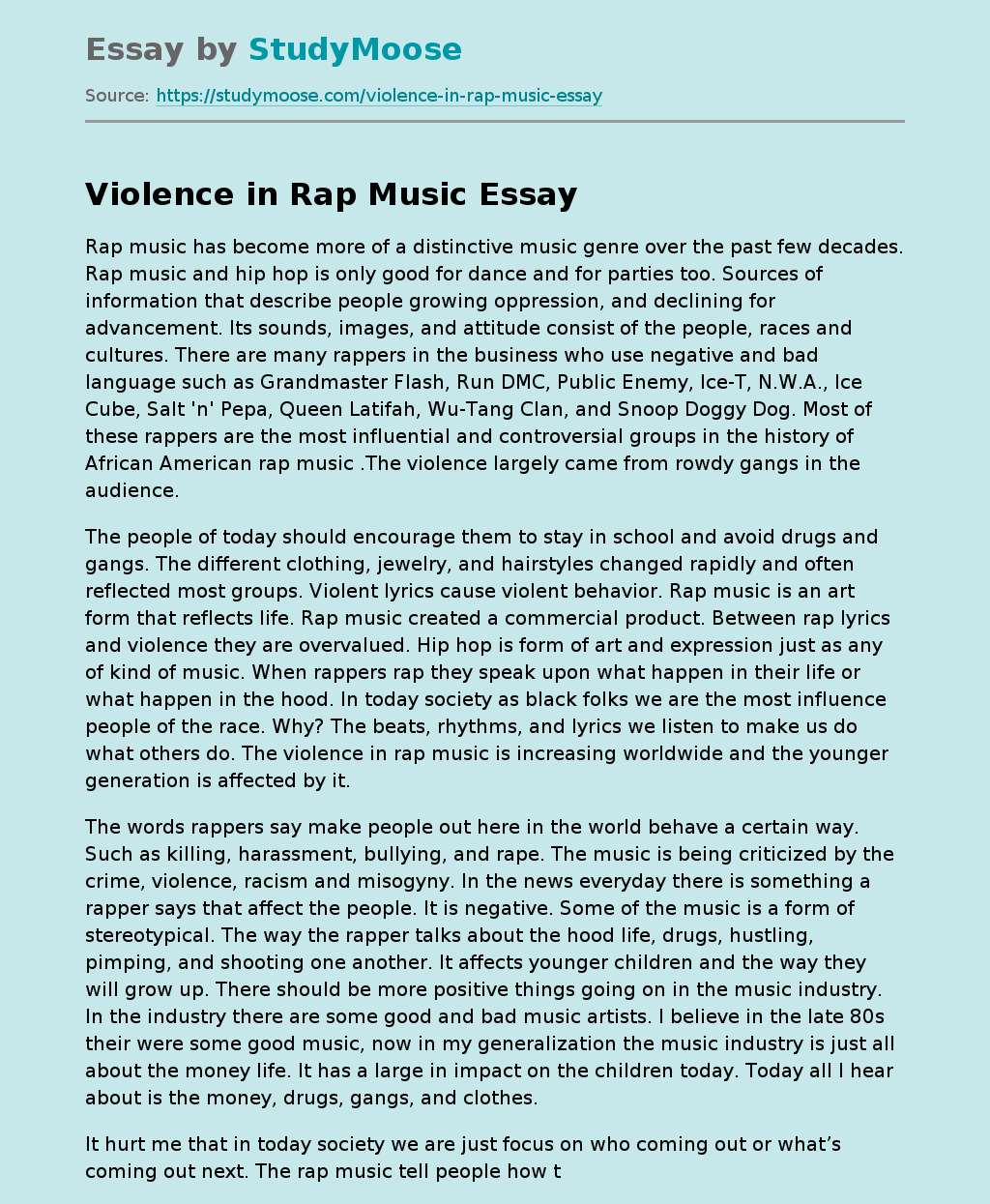