Violence and conflict are central to "Romeo and Juliet." Discuss this theme with reference to at least three scenes in this play

“Romeo and Juliet” is a play written by William Shakespeare. It is a play about love and hate, the two most powerful feelings any one can have. These two feelings are contrasted together and shown very clearly in the acts.

It is about two young adults who meet at a party and it is love at first sight. But there love is destined to fail, as their two families, the Capulets and the Montague’s battle it out for their pride and honour between one another.

Don't use plagiarized sources. Get your custom essay on
“ Violence and conflict are central to “Romeo and Juliet.” Discuss this theme with reference to at least three scenes in this play ”
Get custom paper
NEW! smart matching with writer

This of course means that they are forbidden to have any relationship of any sort. So in the end they have to conceal there love until they can make the peace. So with the power of love trying to overcome hate, this only ends tragically in the death of the two lovers Romeo and Juliet. Only then do we get the peace between the two the feuding families.

The opening of the play starts with one of many violent and aggressive scenes, the fighting between Capulet servants and Montague servants.

And the play sadly ends with a upsetting and some would say violent scene of the deaths of the two lovers Romeo and Juliet. This essay is going to be about the violence and conflict of the two families and the violent scenes that occur in this play. There will be a little bit of historical background, a re-directed scene and then a conclusion of my personal thoughts and feelings.

William Shakespeare’s “Romeo and Juliet” was set in the sixteenth century and was first performed in 1956, in the theatre of Shoreditch.

It was written when the brief vogue for sonnet writing was popular and poets who were exploring and expressing new kinds of love. It was a success from its very first performance. Queen Elizabeth ruled when the first performance came out and she was a great lover of the theatre and its productions. She was especially loved Romeo and Juliet.

People of the sixteenth century were enjoying violent plays with a lot of fighting scenes, so it was important that Shakespeare made this as exciting as possible. He put in enough violence and tension, but contrasted this with the right amount of romance, producing an even balance. The tension between these human emotions and the fine balance between passionate love and passionate hatred are central to this play.

The first violent scene is act 1 scene 1.The scene with the servants and it is a brilliant opening as it gets the audience tension levels rising, creating the right effect to guaranteeing the full attention of the audience. The play opens with Sampson and Gregory-two Capulet servants. They are talking about fighting and how “the weakest goes to the wall.” At that point along comes two Montague’s and the Capulets are ready to fight, “my naked weapon is out.” This not only contains humour as it does resemble a sexual pun, but it does in fact really mean his rapier. The Capulet’s are the ones that start the fight as one of them bites his thumb to provoke them. The Montague’s are willing enough to fight, so they play along, ” Do you bite your thumb at me sir?” This in those days would anger your enemy, as you would basically be saying a rude gesture at them. And of course we do end up in a very big fight, which results in another warning from the prince! The warning mentions the penalty of “your lives shall pay the forfeit of the peace.” This warning is a very serious one, because the two families are reluctant to believe it which consequences in it happening.

This scene is also important because it breaks the opening act and clearly shows the problems the two families are facing and introducing it to us.

My second violent scene is act 3 scene 1. The scene in which Mercutio dies. This is an important scene because it follows up to Tybalts death. Romeo refuses to fight, so to start of with we observe the dangerous play fighting between Mercutio, who challenges Tybalt to a fight instead. They are having a laugh before it starts to go wrong. Romeo gets in Mercutio’s way and Tybalt stabs him before running of with his gang, a very painful death. Mercutio being like he is makes a joke about it, “ask for me tomorrow and I will be a grave man.” This is very ironic because if you do ask for him tomorrow you will find him in a grave, in the ground. This produces an image of death and also violence but it has been blended in well enough for it to be mistakenly missed. Mercutio is trying desperately to show he is not injured badly, “a scratch.”

Unfortunately he does not succeed very well, “they have made worms meat out of me,” secretly admitting that he is doomed and that he is going to die and it is also the complete truth, Tybalt has made worms meat out of him, because soon he will be in the ground. This scene being very violent in the sword fighting that takes place, results in another violent death-the death of Tybalt, by the actions of a vengeful Romeo. Some more sword fighting takes place and it does so because it I is important at that time to make sure that you stand for every thing that you are. For example honour and pride and the only way to show this is to sword fight. Romeo is so full of vengeance he is very violent towards Tybalt. His rage and anger forces Romeo to murder him. The end result is Romeo gets “banished.” This scene being important because instead of the families trying to make peace happen the end consequence is the growth of hatred from each other.

My third and last violent scene is act 3 scene 5. The scene with Juliet and her father. This scene is very aggressive and violent. In those days it was a duty for the daughter to do what she was told in every respect, and it was up to her father to make those decisions. Juliet is being forced to marry Paris in whom she hates, “he shall not make me there a joyful bride.” And because she is already married to Romeo it makes it difficult. The only thing she knows what to do is to rebel, something a women in those days would never do. And this results in a very big argument. Her father that does not no what to do can only resort in threatening Juliet, “my fingers itch.” His temper rises so much that he is screaming at her. Juliet trying Desperately to get out of this marriage gets “down on her knees” to her father pleading. The only thing he does is to say that they “have a curse in having he,” And that he still going to “give thee to his friend,” no matter how much she rebels. In the end this just shows that Capulet is in charge.

This scene is very violent especially for that to happen in those days because it never did.

If I were to direct Act 5 scene 3, the most important change would be the cut of the killing of Paris, because it means that the audience can concentrate more on the tragic deaths of Romeo and Juliet. Also because I feel that Paris is not a character important enough to have a scene to himself, mainly because the last scene really is not about him.

The stage of the last scene would be in the back room of a church where Juliet is waiting to be berried. Juliet would be on a bed surrounded by red and white flowers. There would be a beam of light shining on Juliet from a stained glass window and all around her there would be white candles, half burnt. This would all symbolise peace and a religious atmosphere that Juliet would want.

When Romeo sees Juliet dead he would sit next to her and stare at her while reciting one of his many poems he wrote for her, in a voice that would be so full of pain that he has lost something he could never replace. When after about half an hour Romeo could not cope any longer and the power of love to be with Juliet overcomes him, he kills himself. He will drink the poison while screaming with the voice of pain.

When Juliet wakens she will see Romeo dead and scream at the top of her voice while she looks around drastically for help. When she suddenly stops and she realises that her true love has gone without thinking about it she will pick up the dagger that Romeo has with him and stab herself. This will be done quickly so that as the audience are feeling sorry and pity for the two star crossed lovers, it will be a sudden shock and surprise to see Juliet do this. There will be extra, light background music of a love theme, to add that extra effect.

I do think that this is a violent play because there are so many scenes that contain dangerous sword fighting, that can obviously go wrong as shown in act3 scene1. But I also think that this play is a play about love and it is always there in the background unlike violence. When the violence is there though I can happily say that it can and it does get very aggressive.

When I read and watch this play, I will always remember in the long term the love of this story because it really is a powerful play that really sticks in your head.

I can quite happily say that my favourite scene is the end scene of Romeo and Juliet’s death because it was so powerful, romantic, and violent all rolled in to one. I really do think that this was the best scene especially in the modern film version because it had every thing I was looking for.

Violence and conflict are central to "Romeo and Juliet." Discuss this theme with reference to at least three scenes in this play. (2020, Jun 02). Retrieved from http://studymoose.com/violence-conflict-central-romeo-juliet-discuss-theme-reference-least-three-scenes-play-new-essay 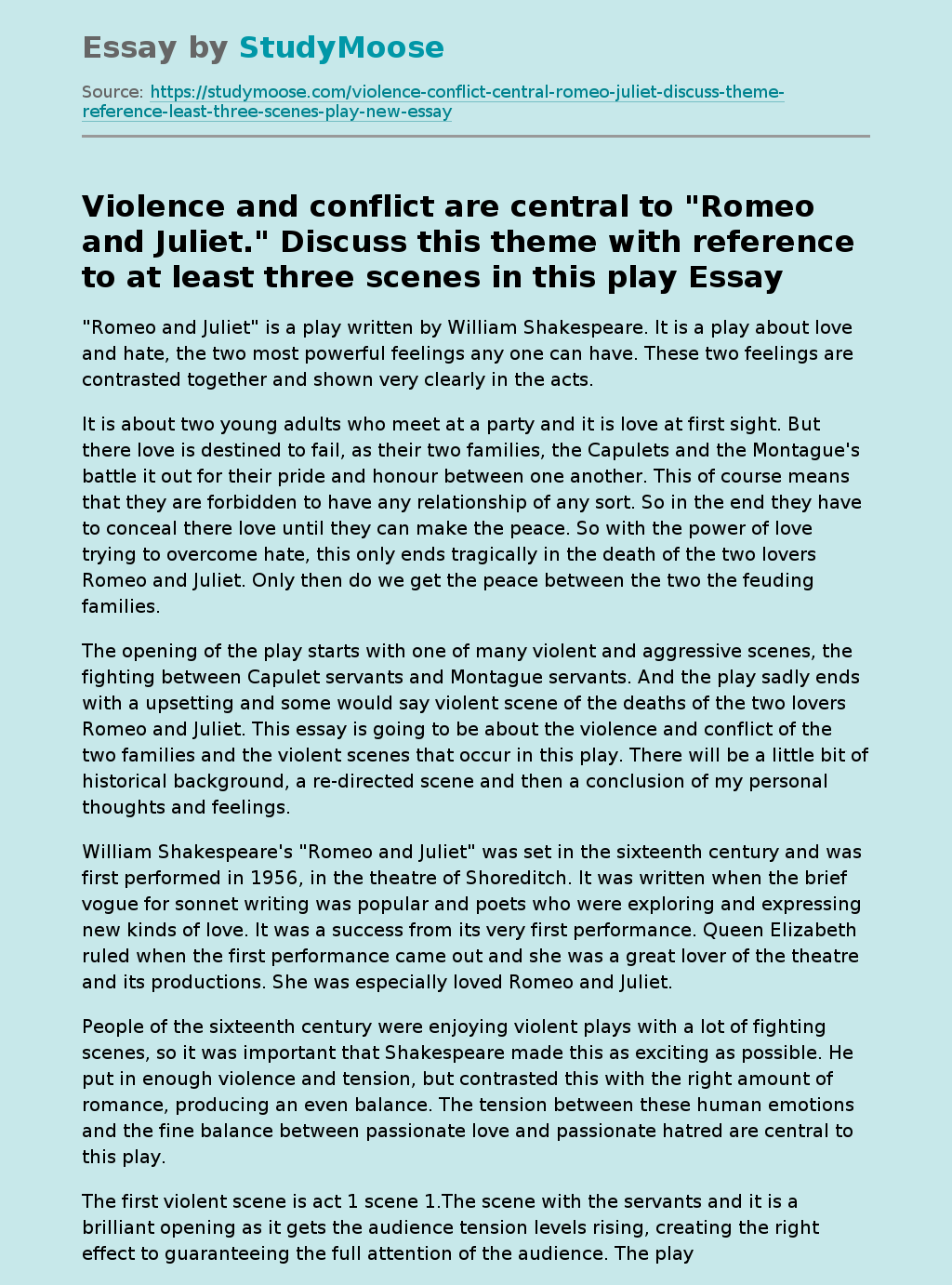