Violence and Guns on Campus

The rise of Gun violence in America is at an all-time high and as a result gun ownership has catapulted alongside this rise. Today our institutions of higher learning are faced with a new threat to the welfare and safety of student and that is the paranoia of some students and teachers who feel the need to “protect themselves” by carrying a firearm. This is the beginning of the end; the traditional college experience as we know it is on the verge of a Wild West show down in the class rooms.

Don't use plagiarized sources. Get your custom essay on
“ Violence and Guns on Campus ”
Get custom paper
NEW! smart matching with writer

The American college experience is characterized as a traditional pathway to success.

From middle school all the way to high school students are prepared for college and for many families this is seen as a rite of passage for the younger generation to go to college. College is a place where lives are shaped forever by hard work and dedication for four years; however, there is a sad reality that some people never get the chance complete their matriculation due to Gun violence on campuses sometimes unprovoked and senseless acts.

Currently in the America many states banned guns from colleges; however, Gun violence is becoming very common place and the reason is not because people are becoming more violent.

The reason is directly attributed to the relative ease in obtaining a firearm without a back ground check; consequently, anyone can get their hands on a firearm and now some students and even teachers want to be able to carry a concealed weapon on campuses across the nation.

There seems to be a belief that if students are armed it will in some way reduce the threat of gun violence since everyone is loaded. In the news, most if not all of the school shootings are concluded with the gunman being killed or apprehended by the authorities and not student or teacher.

The simple reason is that people in fear for their lives are too busy trying to escape and not fight back and in the heat of a campus wide shooting there is no time for a student to engage a crazed lunatic with a gun. The arming of students is not a safe guard in any way to prevent mass shootings; therefore, they don’t need to be armed. Permission to allow student to carry will only exacerbate the problem further. Students have fights and argument all the time in the class rooms it’s a very common thing; however, how different will that argument be if those students are armed.

The problem is everyone individual is not a responsible adult and most college students are not fully mature. Some come from broken homes and violent neighborhoods and some are psychologically unstable and capable of the unthinkable. Proponents want to carry guns on campus open this right to everyone and are not arguing for background checks. Why on earth would anyone allow unchecked people to carry a weapon of any kind? Certainly not me. The argument for the 4th amendment’s right to bear arms needs some amending if it applies to every single person.

Now, let’s say hypothetically students are granted the right to carry weapons on campuses; doesn’t this make it easier for a person to rob them and use that gun to commit a crime. They are just making it easier for the criminal. College campuses are by far one of the safest environments in the United States despite the gun violence and a big reason for this is stationing of armed security guards on the college grounds. This method has proven to be the most affective in deterring criminals and preventing further violence against student and faculties.

There is a big difference between a trained professional and a paranoid individual who want to be a hero in case of a next shooting. In Hollywood movies, it’s very common to see the bad guy taken down by the good guy in a gun battle but in the real world most of the perpetrators are mentally ill and have nothing to lose by taking a few lives before he goes himself. Allowing Student to carry a weapon will only prove to be costly and the reason is because background checks and psychological evaluation will have to be administering by the college in its selection who will be approved to carry and who will not.

That money can be used instead to pay professional guards and police officers to protect students. Campus shootings across the nation are often times carried out with high powered weapons and tactical armor and a small firearm is no match for and assault weapon. The solution is armed security as in the case of Virginia Tech, Sandy hook Elementary, and columbine high school. In conclusion, school is not a place for learning tactical defense in case of a shooting. These things have their time and place; however, if safety is uch a concern for some then they need to take it to the schools administration and suggest ways to improve upon the security for all students.

Young adults are not cognitively competent to defend anyone in shooting situation and that job should be left to the authorities who train day and night to fight crime and keep the schools safe. The dangers of allowing guns on campuses can only bring more harm than good and the truth is most students feel safe on campuses across the nation. More guns equal more problems keep them off the school grounds and in the hands of mentally unstable and impulsive people.

Violence and Guns on Campus. (2016, Nov 18). Retrieved from https://studymoose.com/violence-and-guns-on-campus-essay 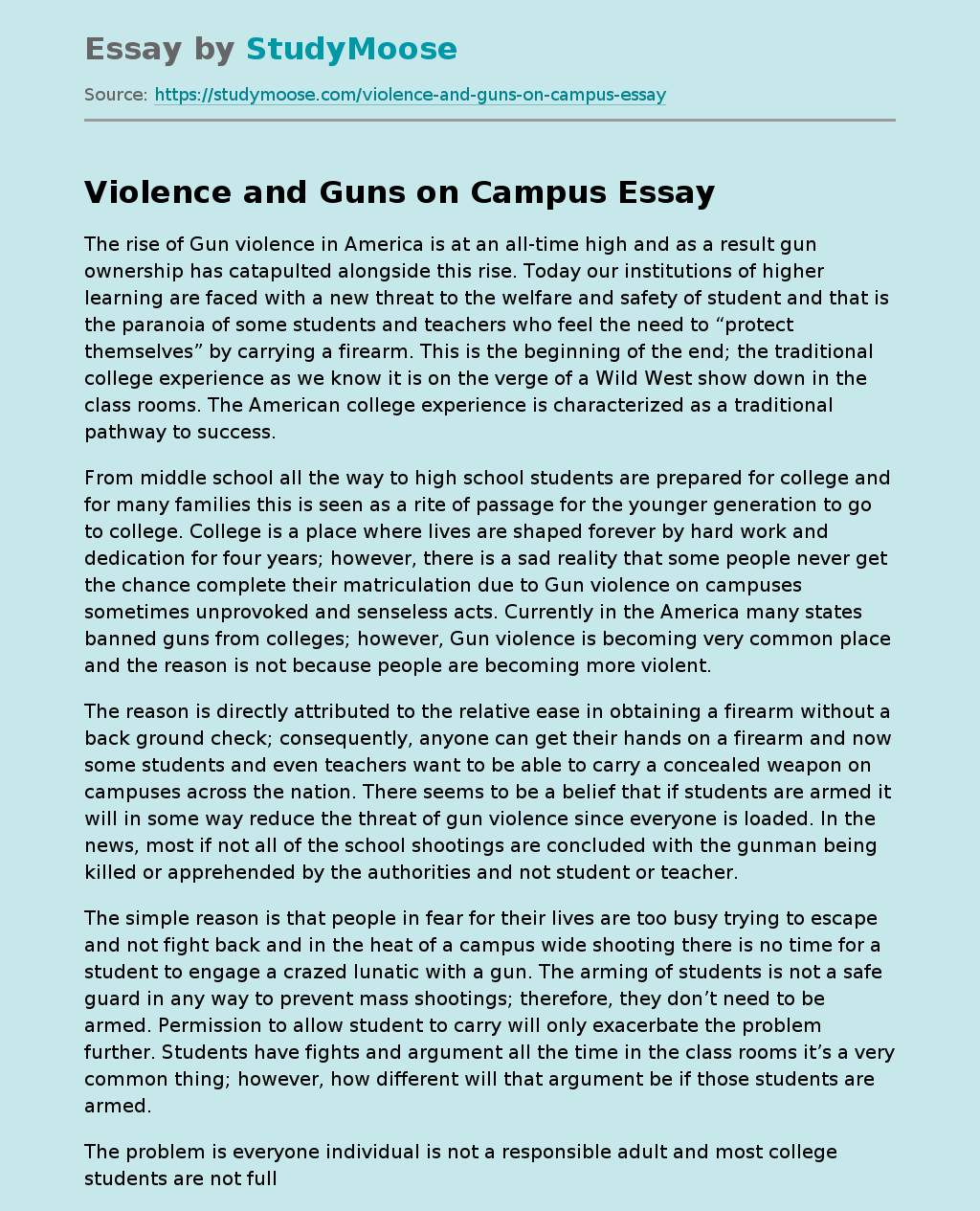