Video games are not designed to burn off a lot of energy. They are not aerobic in any way, nor are they able to increase physical fitness.

Video games are able to stimulate intellect and help to teach people how to focus on one task for hours on end. It gives a psychological reward for extended concentration and effort. Video games stimulate the competitive urge in people, making them more amenable to real-world competition. Competition is healthy and therefore it is a good thing to stimulate it as much as possible.Video games force people to use logic and other problem solving elements of their mind.

This helps them to become slightly more proficient at problem solving in real life. Video games help people to come to terms with being on their own for long periods. This is healthy as people who are over dependant on human interaction are often mal adjusted when it comes to independence and having their own direction in life.

Children are becoming weaker, less muscular and unable to do physical tasks that previous generations found simple, research has revealed. As a generation dedicated to online pursuits grows up, 10-year-olds can do fewer sit-ups and are less able to hang from wall bars in a gym. Arm strength has declined in that age group, as has their ability to grip an object firmly. The findings, published in the child health journal Acta Paediatrica, have led to fresh concern about the impact on children’s health caused by the shift away from outdoor activities.

¦ While one in 20 children in 1998 could not hold their own weight when hanging from wall bars, one in 10 could not do so in 2008. “This is probably due to changes in activity patterns among English 10-year-olds, such as taking part in fewer activities like rope-climbing in PE and tree-climbing for fun,” Sandercock said. “Typically, these activities boosted children’s strength, making them able to lift and hold their own bodyweight.” The fact that 10% could not do the wall bars test and another 10% refused to try was “really shocking”, he added. “That probably shows that climbing and holding their own weight was something they hadn’t done before.” Previous research has already shown that children are becoming more unfit, less active and more sedentary and, in many cases, heavier than before. But the new study also found that children in 2008 had the same body mass index (BMI) as those a decade earlier.

Lead author Daniel Cohen, of London Metropolitan University, said this meant that, given their declining strength, the bodies of the recent test group are likely to contain more fat and less muscle then their predecessors. “That’s really worrying from a health point of view. It’s good news that their BMI hasn’t risen, but worrying that pound for pound they’re weaker and probably carrying more fat,” said Sandercock. The authors want ministers to reduce their reliance on the National Child Measurement Programme, which surveys primary schoolchildren’s BMI, and introduce fitness testing in all schools – a call made last year by the then-chief medical officer, Sir Liam Donaldson. “Climbing trees and ropes used to be standard practice for children, but school authorities and ‘health and safety’ have contrived to knock the sap out of our children,” said Tam Fry of the Child Growth Foundation.

“Falling off a branch used to be a good lesson in picking yourself up and learning to climb better. Now fear of litigation stops the child climbing in the first place.” He added: “Fitness tests may or may not be appropriate, but Sandercock should not be discouraging the use of BMI measurements.” A Department of Health spokeswoman said the government had introduced several programmes promoting active lifestyles among the young, and the health survey for England reported back on physical activity levels. She added: “The Department of Health has no current plans to introduce fitness testing for children.”

Firstly, let’s consider the health repercussions of video games. Sitting in one place, moving your fingers or thumbs around, cannot be good for health. According to research, playing video games increases the risk of various diseases including heart diseases, arthritis, diabetes and many more. In addition, usually when sitting in one place, one tends to munch on snacks, and these are not the healthy ones! Too many calories with too little exercise results in obesity. Obesity can increase your risk of heart attacks and diabetes, high blood pressure etc. So, a healthy life is out of the window and this is the main disadvantage of playing video games. Secondly, video games are addictive. All you care about is forging ahead to the next level. You sit and play for many hours and forget about everything else.

All you care about is overcoming your obstacles in order to get to the next level. So, the moment you come home, you switch on your game and sit and play because you really cannot think of anything else. Your friends call you to go out, your term paper is due in a few weeks and all you that is on your mind is your video game. You are falling behind in your academic studies and you don’t care. This form of addiction is another disadvantage of video games. Computer vision syndrome is a condition many computer users get by staring at a computer screen the whole day. This is not a specific problem; rather it is a range of eyestrain and pain associated with frequent computer use. This is similar to carpal tunnel syndrome. Continued focus on one thing can strain the eye muscles.

It is very different to the focus you give when reading because a computer screen has a glare in the background, the screen flickers from time to time etc. Most often, constant use of computers or video games can cause blurred vision, double vision, headaches and eye irritation all related to computer vision syndrome. Video games can have many disadvantages for children. For example, according to research, violent games produce aggressive children. Playing video games that have a lot of shooting and killing in them increases children’s anger and brings out aggressive behaviour. So, does this mean playing video games has to stop? No. It simply means that we must know when to stop and say “that’s it! I’m done for today”. We must be able to get up and walk away, have a good social life and lead a healthy life. These are far more crucial than a game.

Computers have become indispensable in the modern times. From information to having fun, you can possibly do everything with the help of this amazing machine. For the modern day child, computers are vital and the amount of time that they devote on them has constantly been on the rise.

One of the most popular things with children when it comes to the computer are video games or the computer games. From puzzles to racing, action to sports, strategy to adventure, computer games are possibly the biggest addiction with most children. With companies such as Sony and Microsoft going all out to promote Xbox and Playstation to children worldwide, the allure to these games has only got better.

These video games not only help in making child’s brain sharper through mental stimulation but it also helps relieve them of anxiety or pain. In some cases, games have proved to aid in dyslexic kids reading better. Since adults also love playing games, it can be a time of bonding between adults and children, increasing the amount of time spent together especially when time spent by parents and children is very less nowadays.

On the other hand, the addiction to these computer games can severely harm the child. Since children keep on playing for long hours, it can lead to eye damage. The impact of excessive visual medium is evident as a large number of children these days start wearing spectacles from an early age. Long hours of playing computer games can also result in headaches and dizziness.

But, one of the biggest concerns of playing excess computer games is that a child does not go out and play. Playing outdoor sports not only increases fitness but also helps in better growth of children as they are able to adapt better socially. Some of these games are violent and that is in turn harmful for growing children as it can make them hostile. It may not be possible to ban children from playing these games. However, parents and school have to encourage children to play outdoor sports. It is imperative that a time has to be allocated for them to play video games and adults should try and monitor the type of games being played by children.

Also, it needs to be ensured that a certain amount of distance is maintained between the television and the child. This is to lower any possible damage to eyes as well as avoiding any health hazards that may result out of playing video games. A fine and delicate balance can go a long way in ensuring that children are not only able to have fun and derive benefits from these video games but in the process do not lose out on other essential parts of life. 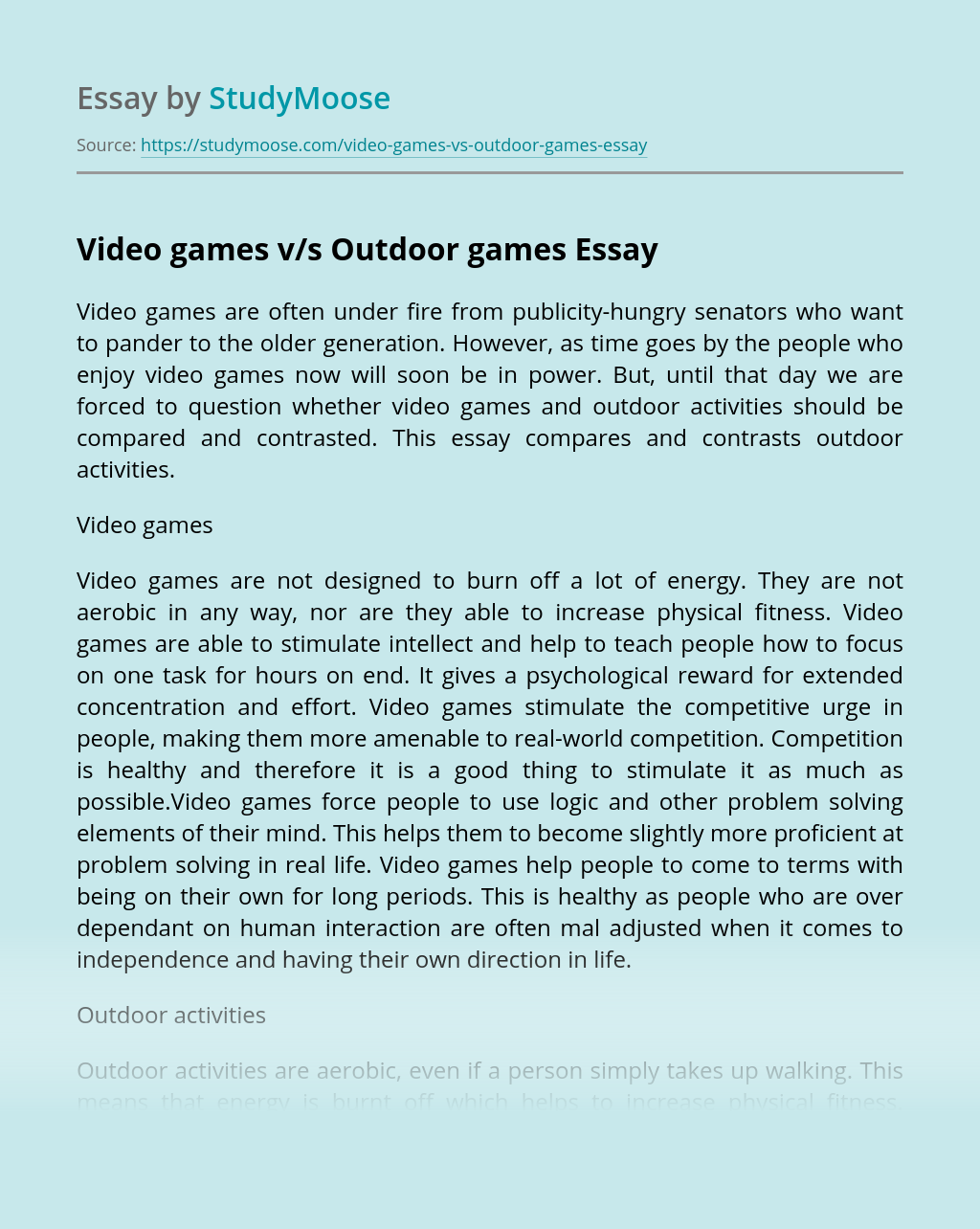