Video Games Should Not Be Banned

Do you remember, when you were a young child, stuff that you would do with your friends together? Or maybe the moment when your parents took you to the nearest park where you could find kids around your age, and you played together? You would play many games with them, hide and seek, -, -, etc. When you were playing around, suddenly one of your friend tripped himself and fell on the ground, he cried. His mother came, rushing, and calmed him down.

Don't use plagiarized sources. Get your custom essay on
“ Video Games Should Not Be Banned ”
Get custom paper
NEW! smart matching with writer

After he calmed down, all of the sudden, out of nowhere, your parents and other kids’ parent came and told you that you could not play anymore, because you could fall like the earlier kid and hurt yourself. That does sound stupid, does it not? I mean, just because one kid got hurt, because he did not pay attention of his surrounding or maybe just because of bad luck, and all kids, had to stop playing.

The same logic can be applied to video games as well.

Proficient in: Hide and seek

According to a 2001 U.S. Surgeon General’s report, the strongest risk factors for school shootings centred on mental stability and the quality of home life of the accused, not media exposure. So it was not because of video games, but more likely it was the offenders’ parents’ fault by letting, or even the cause, of this unhealthy home life. I am a gamer. I play many violence video games. But my parents managed to keep me off from unhealthy lifestyle. Today, I am standing in front of you, my audience, able to give a speech.

You are not seeing any guns poke out of any of my pocket, are you not? I even dare one of the audience to come here and check by yourself that I do not possess any guns. Moreover, moral panic over video games is clearly exaggerated because the offenders are gamer. Kids in general are more likely to be gamers — in the US, 90 percent of boys and 40 percent of girls play video games. Most studies found that aggressive people like aggressive entertainment. The competition found in many video games may be at the root of that aggression and not necessarily the violent content. Which means that kids who play violent video games are already aggressive people before they played them and aggressiveness does not mean violence. Banning video games due to those incidents is unreasonable Second, video games do not turn kids into antisocial. The overwhelming majority of kids who play do NOT commit antisocial acts.

The results of research conducted by Morgan Tear and Mark Nielsen from the University of Queensland (Australia) concludes that playing violent video games does not diminish prosocial behaviour. In other words, it doesn’t make participants anti-social as some research has claimed. The results of the research was recently published in the “journal PLOS ONE”. Which means that they interact with people. If they had any problems, they would talk to their parents or for some kids, they rather talk to their friends. They wouldn’t lock themselves inside their own room when they have problems like the antisocialist would do, that would lead to depression and many more problems that might cause them to snap, and go crazy like killing people. Banning video games due to this reason is unreasonable as well.

Third, If video games are banned the economy will fall because forty percent of American adults play video game regularly. Since video game sales make over twenty one billion dollars a year the economy benefits from them in several ways. When a video game is bought, a state tax is put on it which helps the economy. Also many people are paid to create these video games which provides more jobs. In fact, video games account for one third of the average monthly core entertainment spending in the United States. People, can you imagine what would happen if video games were banned? Anyway, do you know that games can be used to treat some diseases? Researchers from the University of B.C. are using a simple game to find new ways to treat symptoms of schizophrenia and Parkinson’s disease.

In accordance to TechPowerUp, some hospitals are adding video games to their rooms because it has been proven that video games reduce pain. Studies have shown that children feel one fourth of the pain when they are playing video games. When playing a video game, the brain concentrated on it, instead of the pain. When kids play a video games which supports multi player, they have to work as a team.

By working as a team, kids learn to help each other when they are in need. Beating a video game can be a very difficult task that requires lots of concentration, practice and skill. To beat the video game one must practice to succeed which, like teamwork, is another lesson that will be useful thought life. When a kid beats a video game they will feel like they have accomplished their goal. Feeling good about themselves will increase their self-esteem. As you can see, there isn’t a single piece of evidence that video games cause violence. Furthermore, video games have many benefits that are usually overlooked by people because of the moral panic. Therefore, banning video games cannot be done because they provide countless benefits and video games do not possess the threat that many people would think.

Video Games Should Not Be Banned. (2016, Apr 05). Retrieved from https://studymoose.com/video-games-should-not-be-banned-essay 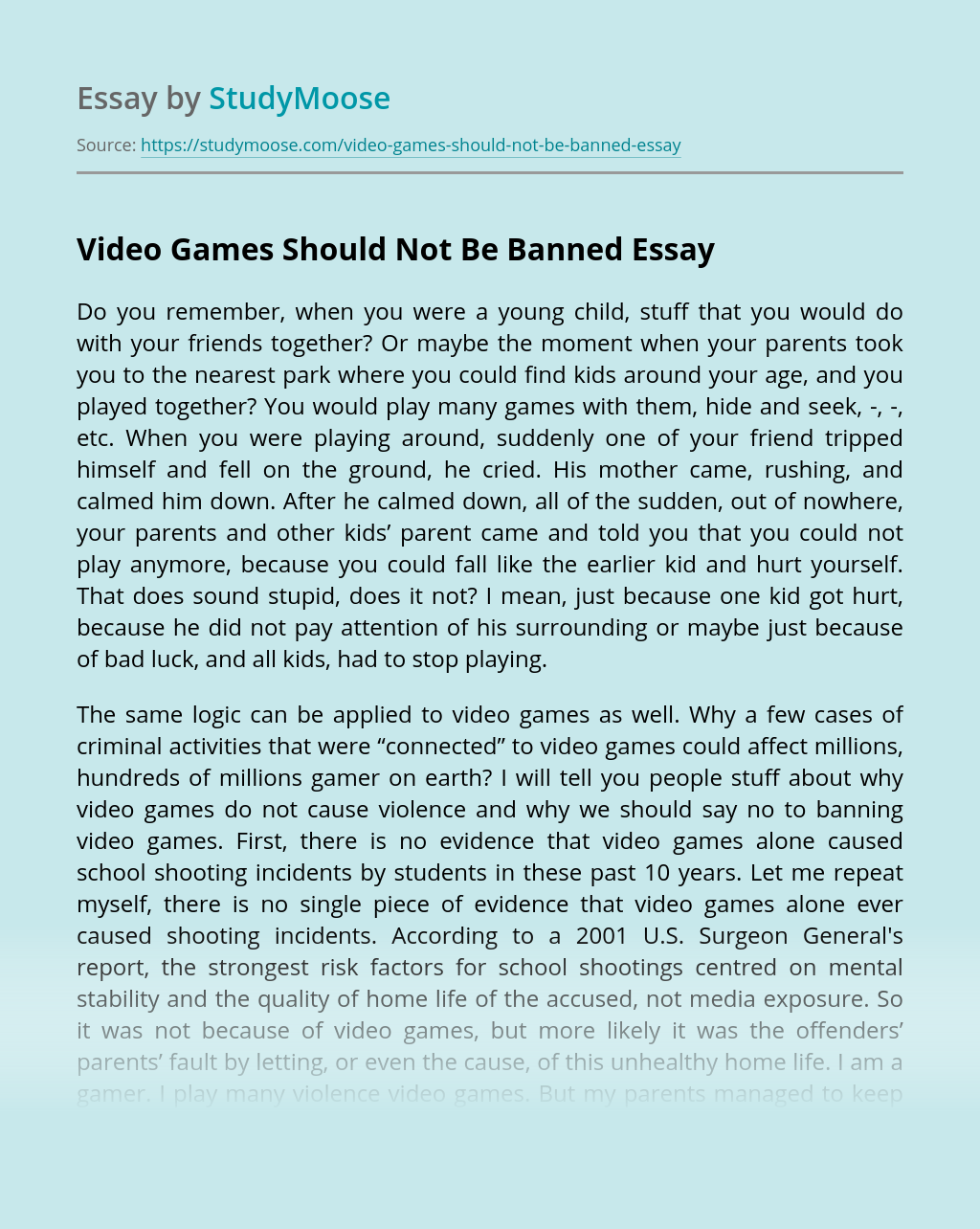