Victoria Chemicals, a major player in the global chemical industry that supplies polypropylene, polymer that used to manufacture carpet fibers, packaging, automobile parts to the customers in Europe and the Middle East. Apart from numerous small producers, the company also receives the threats from the other seven major competitors.

The company owns two plants in Europe, one being Merseyside Works, England and Rotterdam Facility, Holland. Both plants were built in 1967 and are identical in scale and design. James Fawn, the Vice President and Manager of Intermediate Chemicals Group, is in charge of both plants.

Don't use plagiarized sources.
Get Your Custom Essay on Victoria Chemicals Plc (a): the Merseyside Project Just from $13,9/Page

In the year 2007, there is a drop in financial performance within the company. Earnings have dropped from 250 pence per share to 180 pence per share. Also, a well-known corporate raider, Sir David Benjamin, has accumulated the firm’s common shares.

The firm tried to lower their price to compete with their competitors. Meanwhile, Merseyside required more labour hours because of the obsolete semi-continuous method of producing polypropylene.

This caused the firm to face high costs and lower revenues.

The firm’s previous manager had minimized capital expenditure to cover only the necessary maintenance over the past 5 years. Unfortunately, the routine maintenance was delayed and it needs to be urgently addressed so the firm can renew their production line.

Lucy Morris, the new plant manager of Merseyside Works, and her controller Frank Greystock are proposing a revamp of the polymerization line which can solve the problem of deferred maintenance on essential equipment. They are planning to correct plant designs to reap energy savings, improve process flow and ensure greater throughput, and this will cost the company 12 million pounds.

This project will be reducing the energy usage of the firm by 1.25% during first year and 0.75% in years six to ten. It may also increase the gross margin by 12.5% and manufacturing output by 7%.

This project will also bring some disadvantages. The Merseyside plant has to shut down for 45 days for the renovation. During this period, Merseyside Work’s customers will be buying products from its competitors as Rotterdam Facility will be functioning at its maximum capacity and it is not possible for them to satisfy the demand. To this point, Frank Greystock mentions that the loss of customers is only temporary.

Victoria Chemical owned tank cars that transported propylene gas from 4 refineries in England. The Transport Division that responsible for managing the tank cars, has been oversaw the movement of materials throughout the company. And therefore, the allocation of tank cars to Merseyside increased in anticipation of growth from the proposed renovation. And now, the allocation made excess capacity. The company can increase the production but they need to purchase rolling stock to support the growth in other areas and the purchase cost 2 million pounds in 2010, the depreciation is 10 years.

The Transport Division believes that the cost of tank cars should be included in initial outlay of Merseyside Works capital programme. The director of ICG sales thinks that the recession will reduce the demand for polypropylene, and thus lead to an excess supply of polypropylene. To combat this, the firm will shift capacity from Rotterdam to Merseyside, and Merseyside will cannibalize Rotterdam.

However, controller Frank Greystock refuses to believe the director of ICG Sales, and therefore did not included charges for loss of the business in analysis. Also, he calculated his figures with a 10% DCF. Treasury staff believes that the real return is only 7% due to the 3% inflation per year. Using this different rate of return could cause the company to accept projects that should actually be rejected.

Griffin Tewitt proposes to include a renovation of the EPC Production line, costing 1 million pounds. He also believes that renovation will give the firm the lowest EPC cost base worldwide and improve cash flow by 25,000 pounds. The NPV is also stated to be at a negative figure of -750,000 pounds. Tewitt however was defensive on the negative figure, stating that the NPV ignored strategic advantages from the project and also the possible increases in volume and prices when the recession ends. 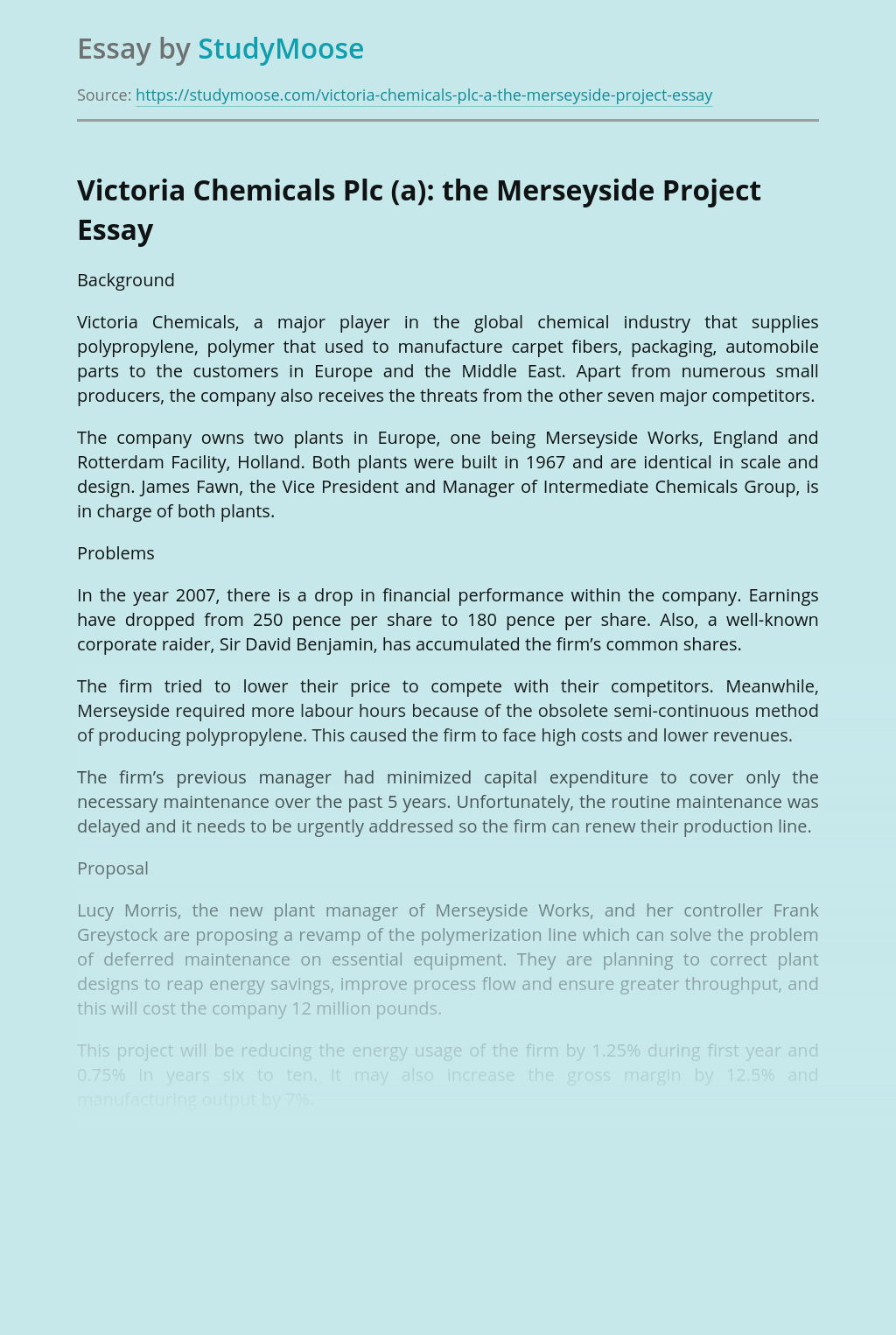 1.) What do you think about Hagedorn’s approach to controlling employee health care cost? Do you agree with it? Why or why not? Mr. Hagedorn’s approach to control employee health care cost is through providing a wellness facility program for their employees and also creating rules concerning on health and monetary punishments to those who... VIEW ESSAY

As shown in the calculations above, Northern should accept the bid from Thompson division as it has the lowest cost if all transfer prices within the company were calculated at costs. Incurring the lowest costs would also enable Birch Paper Company to earn the highest profits possible. 2. As alternatives for sourcing exists, Mr. Kenton... VIEW ESSAY

*Access to care may be defined as the timely use of needed, affordable, convenient, acceptable, and effective personal health services. Accessibility refers to the fit between the location of a provider and the location of patients. *Administrative costs are costs associated with the management of the financing, insurance, delivery, and payment functions. These costs include... VIEW ESSAY

View sample
The Human Cost of an Illiterate Society

Précis: In “The Human Cost of an Illiterate Society”, Jonathan Kozol, a Harvard graduate, argues that illiteracy cause the loss of choice or freedom and leads to many problems. Kozol highlights his argument with examples of when illiteracy can be binding such as “Many illiterates cannot read the admonition on a pack of cigarettes. Neither... VIEW ESSAY

The first principle can be summarized with the following phrase “There’s never a free lunch” every time that you need something you have to give something in return. One example is an employee that needs a particular day off. He could just miss work and not get paid or ask for a change of schedule... VIEW ESSAY