He looked nothing like them but more like a monster. The readers also feel sorry for him because he is calling himself a monster. This made him question how the cottagers may react towards him because of his ‘deformity’. Frankenstein the monster feels though the cottagers are his ‘protectors’. In chapter 14, Frankenstein the monster is confused because he doesn’t know anything about himself. But he knows why people know get scared of him. This is clear when he says: “I was, besides, endued with a figure hideously deformed and loathsome’.

Don't use plagiarized sources. Get your custom essay on
“ Victor Frankenstein ”
Get custom paper
NEW! smart matching with writer

He also understands the difference between himself and other people.

There is no one like him. He thinks of himself as a ‘monster, a blot, upon the earth, from which all men fled’. He also feels ‘ disowned’. When Frankenstein the monster says: “I cannot describe to you the agony that these reflections inflicted upon me: I tried to dispel them, but sorrow only increased with knowledge”. This tells me the more he gets to know the more depressed and lonely he gets.

He feels as though he can’t mix with humans now. I feel sorry for the monster because he has no father or mother to care for him like humans have. We cannot really call him a monster.

Later in on the story the monster finds books from which he learns. But then he takes out Victor Frankenstein’s journal from his coat pocket and knows who created him. He also knows his creator neglected him because of the way he looked.

Now he feels even more sorry for himself. He says he has no-one, to soothe his ‘sorrow’. We feel even more remorse for him. He thinks he’s got no one now and decides to meet the cottagers hoping they will accept him because of everything he done for them. However when he introduces himself the old man doesn’t react to how he looks because he is blind.

The first bad thing Frankenstein the monster does is that he ‘destroyed every vestige of cultivation in the garden’ and burnt the cottage. But he is not evil because he has not killed a human being yet. He says that he was ‘unable to injurer anything human’. After he has committed this bad deed he saves a girl who ‘fell into the rapid stream’. He describes the rescue as ‘extreme labour’ because he had to fight the ‘force of the current’. He then ‘dragged her to shore’. We as readers, think that the monster is still not evil because he saves the girls life. But what does the girl father do? He shoots at the monster.

He does not die but does get hurt. Frankenstein the monster then reflects on how he has been treated by mankind. He does good things for humans and they just hurt him in return. Then after careful consideration he says: “I vowed eternal hatred and vengeance on all mankind’. He has now decided not to help people but to kill because if he doesn’t they will kill him. After a while a child comes towards him. Frankenstein’s mind does not straight away think about killing the child. Instead he wants to ‘seize’ him and ‘educate him’ as his ‘companion and friend’ so he has someone to share things with.

When Frankenstein approaches the childs, the child shouts: “Monster! Ugly wretch! You wish to eat me to pieces –You are an ogre – Let me go, or I will tell my papa”. Frankenstein thought a child wouldn’t react towards him in this way. Soon after the child says: ” My papa is a syndic – he is M. Frankenstein” It is these words that cause William’s death. Meanwhile, Frankenstein the monster’s, approach to the boy has totally changed. He decides to let out his rage. Frankenstein says that William belongs to his ‘enemy’, and decides that ‘he shall be his first victim’.

He then picks the boy up and ‘graphed his throat to silence him’. This is the first proper evil thing the monster has done. At this point the monster feels excited and knows he has the power to kill. The fact that he is excited when he kills is a bad sign. Now he knows Victor Frankenstein is ‘not invulnerable’ and wants his revenge even more. At this point we, as the audience, don’t feel sorry for him anymore because he has killed. Therefore it would be right to start calling Frankenstein the monster a monster. From this point on the monster’s behavior towards humans deteriorates.

The monster then picks up the locket from the child’s neck and looks at the picture with in it. He feels sorry for himself because he can’t have a female companion. But he does not get the readers’ sympathy. Later he goes to a barn were he finds a woman ‘sleeping on some straw’. He admires her for a minute by saying she was ‘ blooming in the loveliness of youth and health’. Frankenstein then goes up to her and says: “Awake, fairest, they lover is – he who would give his life but to obtain a look of affection from thine eyes: my beloved, awake! ” Frankenstein the monster wants her just to look beneath his appearance for what he really is.

He wants people to act normally towards him for once. But he knows that it is impossible and that she would act the same as the rest of the people. Therefore he decides to make her ‘suffer’. He plants the medallion on the women for the murder of William, and he knows she’s going to be killed due to ‘the sanguinary laws of man’. This shows how intelligent the monster is and that he can apply what he’s learnt. Frankenstein the monster finally meets Victor Frankenstein and made him promise to create a Female companion for him, who would be ‘same species’, with the same ‘defects’.

He says that he was ambitious when he was young and didn’t really think about the consequences. He feels although he has sunk low and hasn’t done anything good for mankind, which is what he had intended. Walton also has the same intention of becoming remembered in history, but he too had not thought about the consequences. Many people have already died during his uncompleted trip to the North Pole and many more were going to die if he didn’t turn around. This is in contrast to Victor Frankenstein’s situation where he went too far which lead to the dead of his family and friends.

Frankenstein tells Walton that he knew of the consequences, both death and danger, but still went along with his dream, for honor and the benefit of mankind. The monster did benefit mankind but it also bought death and horror to many people. He is telling them to face up to the fact which is ironic because he himself ran away from his creation and did not even tell people that he was the one who created the monster. Then Walton meets Frankenstein the monster for the first time and says how disgusting the monster looks. He says: “Never did I beheld a vision so horrible as his face, of such loathsome yet appalling hideousness”

Walton then says: “It is not pity you feel; you lament only because the victim your malignity is withdraw from your power”. Walton is explaining his anger by saying that Frankenstein the monster is grieving because before he had Victor under his power but now he has got no one. Frankenstein the monster then wins back the sympathy of the audience by understanding what be has done and says ‘crime has degraded me beneath the meanest animal’. He also says that: “I am alone” We feel sorry for the monster because he has now got no one.

My finally impression of Frankenstein the monster would be a victim who has been driven into becoming a villain by the reaction and behavior of people around him. The monster being abandoned by his creator played a big part in the monster turning evil. The monster was doing good things for people and they repaid him by harming him. But he still did good things and at a point he became a hero by saving a girl’s life. He committed his first murder of a human when he was introduced to the Frankenstein’s brother. From them on his status in the audience’s eyes go down hill.

He had becomes hated. Mary Shelley’s main message of the novel is that you shouldn’t be over ambitious. Mary Shelley is trying to tell people that scientific experiments should not to be used to play with nature. Nature should be left alone because the consequences may be disastrous, as shown by Frankenstein’s experiment. I think that the novel is still important today because of all the experiments being carried out in the 21st century such as cloning, genetically modified food, designer babies and so on scientist, should take a deep breath and reflect on this novel.

They should question themselves if they are doing the same mistake as Victor Frankenstein, of being over ambitious. Today’s scientists are still in the early days of their research and should seriously consider the consequences of what they are about to create. Through reading the novel I also learn that you should never judge a person just by looking at them. This was the obvious mistake that the humans made when they saw Frankenstein the monster. 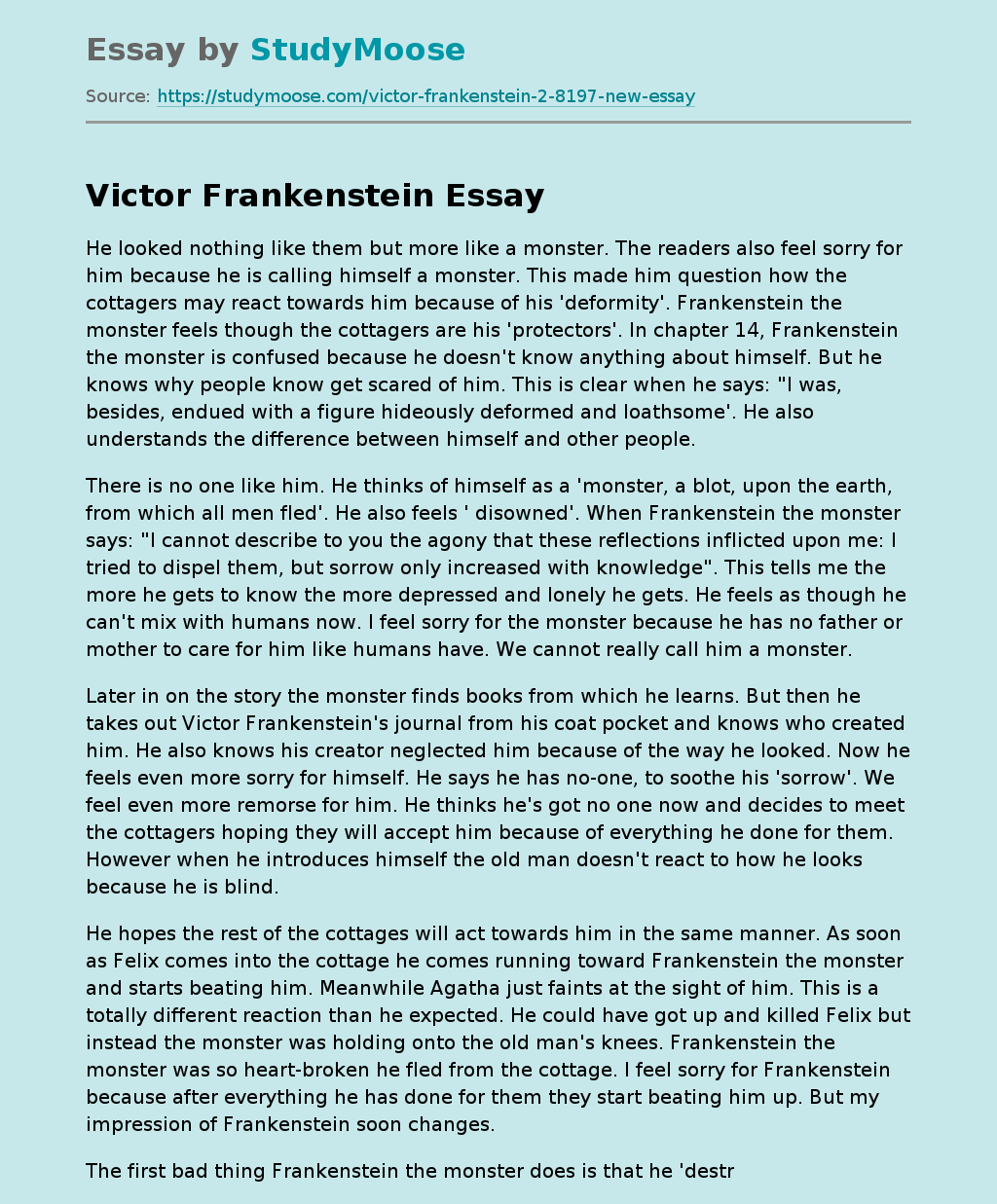