Vernon Wayne Howell, also known infamously as David Koresh, became the epitome of crazy due to his actions in 1993. Koresh had become the head of the Branch Davidians and would later convince them that he was the Messiah, that world was going to become an apocalyptic hell, and, ultimately, convinced them to shoot at FBI and ATF agents. He earned the name of being a cult leader of the 20th century and became well known for the 51-day standoff between government officials and the Davidians.

Through his powerful speech and persuasion, he convinced his followers that he is the prophet that the Bible speaks of and later convinced them that he had cracked the 7 seals. these beliefs left his followers to fire at government agents, leading to casualties.

David Koresh was an impact on many people’s lives as he had changed people’s opinions by simple, yet powerful words. As Koresh had told them, he was the someone who had fallen from the skies to teach and educate the believers that the world is going to end in an apocalyptic hell.

His followers, also known as the Davidians, were convinced by his speeches and powers that he was the one to save them. As informed to us by the narrator of the documentary, David Koresh, “But to his followers, he remains an anointed one. A messiah martyred for his beliefs “. Expanding on what the narrator said, this proves how David Koresh had got into the mind of these people and made them gullible to the fact that he was a messiah and a prophet.

He had interpreted the bible differently convincing all his women follows that they were his wives, ultimately making him a husband to many women, as some were underage, and a father to many children, like what he was to his wife’s sister’s children. He had many other relationships with many other women and many would not object or accuse him rape as these women were convinced God told Koresh to commit these horrific actions. Though many people had found this extremely violent and horrific, the Davidians had found this to be an act of God. As said in the documentary, an ex-wife, Robyn Bunds, of David Koresh had expressed that ” I mean I was willing to do that, give up everything to be that close with God.” As Robyn Bunds had said, women felt like it was an honor to be mating with someone this close to God. All that has been said opens our eyes to show how manipulative of a man David Koresh was. This goes to show how powerful of a man he was in his words to convince people to do acts from believing he is a prophet to impregnating underaged women in the name of God.

The Seven Seals is a phrase in the Book of Revelation that refers to seven symbolic seals that secure the scroll that John of Patmos saw in his Revelation of Jesus. These 7 Seals, when unlocked, unleash hell on earth. David Koresh was a believer in these 7 seals and based his beliefs on it, making his believers to follow. He had had a whisper from God saying to only let followers out only if the 7 seals were complete. His followers had believed in him in the sense of he was doing the right thing. As he was trying to complete the seals, the ATF had raided the area, putting his writing to a halt. The seven seals were trying to be broke as David Koresh was bombarded with government agents trying to take him down. He had broadcasted that he was proceeding to write his 7 seals and he could only let everyone out after he had Finished it. This lead to government officials seeing this is a stall, therefore they had raided the compound, leading to the Waco Seige.

The Waco Standoff went down as the longest standoff between government officials in US history. The siege had lasted 51 days starting from February 28 through April 19, 1993, where the church they had, Mount Carmel, near Waco, Texas. The investigation of the Branch Davidians started with complaints of child abuse and malnourishment of children, leading the Child Protection Services to come and investigate. At the same time, the Bureau of Alcohol, Tobacco, Firearms, and Explosives were cracking down on the collection of guns they have been accumulating. From other sources, the ATF had uncovered that children were around open, deadly, firearms. This leads them having to search the facility of illegal firearms and explosives, and arrest the cult’s leader, David Koresh, on weapons charges. The Branch Davidians had known that the ATF was approaching, therefore staying equipped with weapons to hold them back as David Koresh finished writing the 7 seals. David Koresh was infuriated due to the fact of the impatiens of the government, convincing himself and the Davidsons shooting back at the agent’s was going to make it better and this was a test of their faith. As being a master of convincing people, everyone stayed at Mount Carmel until David Koresh got approved by God to let the Davidians leave. David had given them many chances to leave but his words had brainwashed them into believing that this is a test in the faith of God and him. “He went around 3 times in a day, asking people if they wanted to leave after the shooting stopped. And nobody wanted to leave” Catherine Matteson said, a Branch Davidian. Having this information leads us to conclude the amount of dedication these men and women had towards God and their faith in David Koresh. On February 28, a four-hour gunfight left six of Koresh’s followers and four ATF agents died causing the Federal Bureau of Investigation, on April 19, 1993, to launch a tank and tear gas assault on Mount Carmel. Not leaving the building was an order from God to David Koresh to the Davidians. Koresh had believed this was the end because he had written all 7 seals and that had unlocked the way the world was going to end. The Waco siege came to an end hence the fire that had burned and killed all but 6 Davidians who had escaped. Koresh’s body was found in the flames with a gunshot wound as of many other victims of this blazing, scorching, later ashes. This standoff was a life or death situation, taking great courage and faith to stay in a building of flames, teargas, and explosives, just for a man saying he is a messiah.

The ideas and power of mob mentality can only be expressed by the people who had been part of the time of this catastrophic situation. David Koresh is an exemplar for a man of magical power and how one individual can cause humans to believe in the impossible. Koresh had convinced people he was the prophet and the world is going to end and the only they will come to heaven leaving them to fire at government officials in the name of David Koresh. Imagine being brainwashed into thinking people were going to end the world and the only way to live and have a better afterlife is to just shoot at government officials trying to make the situation safer. You are just doing what u were told to do and just doing “the right thing.” Imagine that. 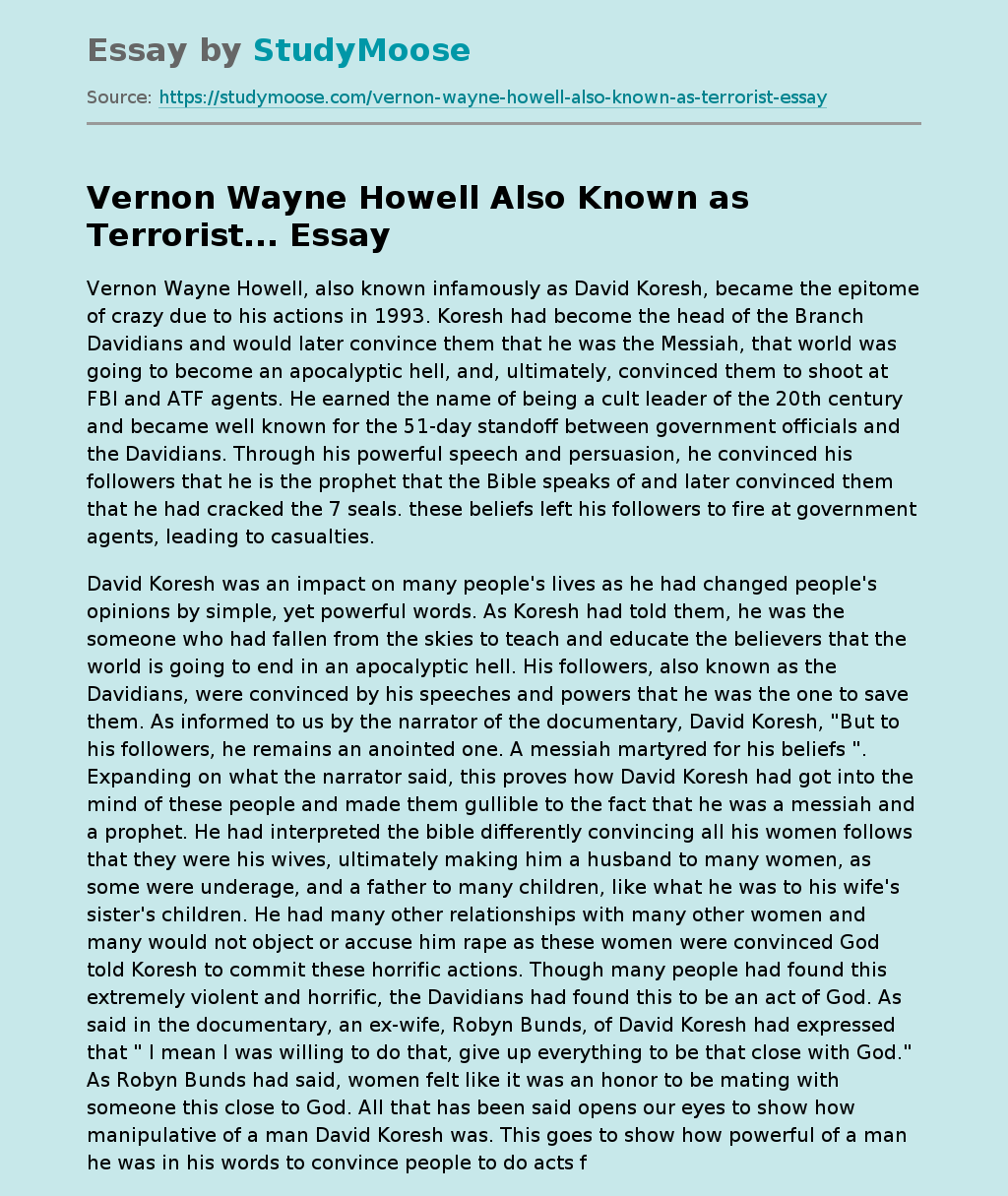