RELATED LITERATURE
According to an article by Long (2011), deceiving another person with your nonverbal messages is a form of contradiction. For example, you may be bored on a date or in class, but you do not want to communicate this feeling. So you pretend – you simulate interest, by keeping eye contact, nodding and sometimes smiling, all of which are not truthful messages about your feelings. Impression management is creating and controlling the way other people perceive you. You arrange your hair in a certain way, you walk in a different manner, you speak in a certain pitch or tonne of voice or even select the right clothes.

Don't use plagiarized sources. Get your custom essay on
“ Verbal Persuasion and Body Language ”
Get custom paper
NEW! smart matching with writer

You create a desired impression for certain situations- job interviews, a meeting with the dean or making friends with a stranger. Everything about you- looks, clothes, behaviour- can be interpreted, thus, you are continuously communicating even without talking. Nonverbal communication is often ambiguous. Gestures alone only tell a part of what you have to say.

One action, for example, yawning, can be interpreted in many ways. It may mean that the person is bored, he just ate lunch and is sleepy or he stayed up late- all situations with one action with each with different contexts. Besides that, communication exists in all cultures. The set of gestures, habits, movements, and style of dress of that you learned in the culture you grew up in may not even be close to what someone else has learned in another culture.

An article by Polanski (n.d.) reviewed the 6 principles of persuasion of Dr. Cialdini. These are reciprocation, social proof, commitment and consistency, liking, authority and scarcity. The implication of reciprocation is you have to give first; give something and they will give you something in return. When people are uncertain about a course of action, they tend to look around to help them make a decision or to look for “proof”. People are more likely to say “yes” to those they know and like. They are more likely to favour
those who are physically attractive, similar to themselves or who give them complements. Giving the appearance of authority increases the likelihood that others will comply with requests. According to studies by Professor Albert Mehrabian (1967) as sited by Carpenter (2009), body language accounts for 55% of a first impression, 38% comes from the tone of voice and 7% comes from the actual words. When verbal and non-verbal cues are incongruent, people are more likely to believe the non-verbal cues. In Carpenter’s (2009) review, women often tend to make themselves small while men tend to take up more space. Taking up more space is showing dominance or control. Smiling too much might make you look less believable. Women are much more expressive than men; they keep re-explaining their point and see no reaction, so they end up overdoing it. Holding your own hands can show anxiety. Feet/legs often point in the direction someone wants to go or something they are interested in. For women in Western Culture, tilting your head can mean submission or flirting, excessive smiling implies lack of seriousness and playing with or tugging at your hair, jewelry or clothes can mean distress or flirting.

PROCEDURES
His experiment needs 1 male and 1 female subjects of the same age level, a recorder and 3 observers.
The male and female subjects will act as solicitor for 1 hour. They will be assigned to station themselves at nearby shopping centers, bookstores or other strategic designated areas. E instructs Ss the following:

Approach every third passer-by and say, “Excuse me, could you give me a peso?”. Do this for 30 minutes.
In random order, S should accompany the request by adapting two types of physical intimacy: a) gaze directly to the eyes of the person,
b) employ physical closeness, meaning use a mild physical contact like brushing or touching the shoulder or hands of the person. For the next 30 minutes, follow the same procedure but this time the subject will say the
appeal accompanied by a reason like: “Excuse me, could you give me a peso? My bag got snatched and I don’t have any money left.”

DISCUSSION
According to the study cited by Carpenter (2009), body language accounts for 55% of a first impression. So the way the subjects interacted with the
participants has an influence on whether they were given a peso or not. The male subject was scratching his head while he was walking around outside Tutuban mall. This behaviour caused people to think that he was schizophrenic or mentally ill. He was also wearing his white uniform, making him look decent. It made the situation less believable because he didn’t look pitiful. He was also Chinese; this implies racism. It was conducted around 8:30 a.m. There were only a few people around, which is probably why he only got Php 5.00. A lot of people around were also noticing him already half way through the 30 minutes. The female subject came to the footbridge around 9:00 a.m.; a lot of people were walking to and from during that time so only the people from afar noticed her. She was also wearing her white uniform, which is why some people looked at her incredulously. For Set I, more female respondents gave money to the male and female subjects. It shows that the opposite sex gives more frequently than those of the same sex. There was this one male respondent that ignored the female subject at first, but called her after walking away; he gave her Php 5.00. For Set II, it was already getting sunny outside around 9:30-10:00 a.m. The male subject was able to solicit quite a large amount compared to the female subject. Although it was getting sunny, more people were passing by and no one was standing by so many people have not seen him before. The female subject changed her location for Set II. There were a lot of people standing by outside the mall in Divisoria. Many were wondering why she was walking back and forth outside. The first respondent she approached was an old lady. She believed the subject at first and was about to give her Php20.00 but questioned her before giving it, so it did not count. It was difficult for her to approach people because she

was not allowed to stay at the sidewalks where most people were walking. Because of that, she was able to solicit only Php 8.00.
Social desirability had something to do with the results of this experiment. Both subjects looked decent enough to have money. The factor of racism, location and time of the day can be considered for the male subject having solicited a large amount during Set II. The female subject, however, had a poor location during the second set, which is why she solicited a small amount only. Both subjects focused on eye contact and minimal physical touch.

It can be advised to beggars to make more eye contact with people and make themselves look and sound believable. Body language has a lot to do with persuasion; as it was said, it accounts for 55% of first impressions. Verbal and nonverbal cues should be congruent for more effective persuasion. Nonverbal cues included the way the subjects dressed. It was a huge factor that affected the results of the experiment. It is recommended that subjects do not wear uniforms or make themselves look decent. Also, all sets should be done in the same location at the same time of the day. 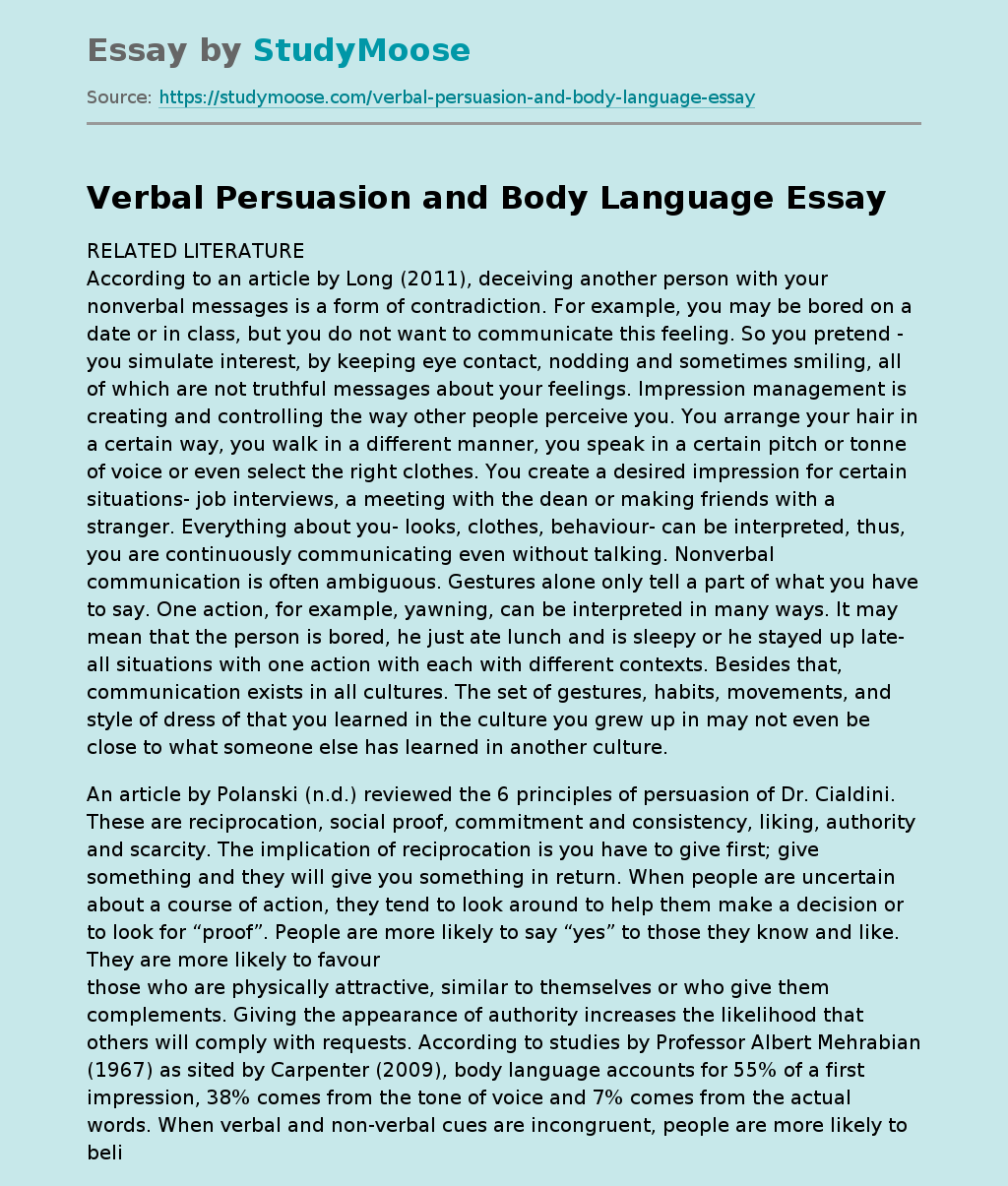