Venus of Willendorf: An Annotated Bibliography

Witcombe, C. 2003. “Women in Prehistory: The “Venus” of Willendorf” http://www.asu.edu/cfa/wwwcourses/art/SOACore/Willendorf_portfolio.htm

Witecombe’s article was useful in describing the material the figure was carved from, oolitic limestone. He described the material as nonnative to the region, which he inferred that the figure must have traveled there from another area. Witecombe also described the method the Venus of Willendorf must have been carved from, flint tools. Flint tools were not used locally during the period of the region the artifact was discovered.

Don't use plagiarized sources. Get your custom essay on
“ Venus of Willendorf: An Annotated Bibliography ”
Get custom paper
NEW! smart matching with writer

Witecombe’s article was not useful in describing how this prehistoric artifact was given its title. Harding, J.R. 1976. “Certain Upper Palaeolithic ‘Venus’ Statuettes Considered in Relation to the Pathological Condition Known as Massive Hypertrophy of the Breasts” Man, New Series, Vol. 11, No.2, June, 271-272

Harding has a very different idea of why the Venus of Willendorf was carved. He believes that the prehistoric figure portrays that of a female with massive hypertrophy of the breasts.

The person who made the figure may have been the medicine man or someone intrigued by this condition. Harding argues that the condition is present in the height of the statuette, the excess mammary development in relation to the size of the thighs, hips and stomach. He believes that the hand(s) seen on the breasts may that of the medicine man. Harding also offers the information that the lines portrayed on the Venus of Willendorf are possibly previous incisions made by the medicine man as part of his treatment.

This article was useful in describing the garment worn on the head of the statuette and its use. The garment provided realistic details of a fiber-based, woven hat or cap. More closely examined, there appears to be a knotted center atop the middle of the garment, which the weaves spiral radially from. The garment is intricately detailed including cross stitches and interrupted areas in which new fabric has been added. Prior research has lead the authors of this article to believe that females during the Upper Paleolithic commonly wore little to no clothing. Of course, this belief may not be true according to the season. Therefore, the authors specify that their assumption of the use of the garment should not be taken at face value.

Johnson’s article was particularly helpful to understand a different view of the Venus of Willendorf. He supports the idea that the figure was carved to represent fertility. He notes that there are no facial features and only the slight hint of a neck appears. The lower body attracts all the attention of the viewer. The well pronounced features occur most often during pregnancy, breast feeding and steatopygia. These features include exaggerated thighs, stomach, buttocks and breasts. He further examines different works of art from the Upper Paleolithic only to find various paintings of mother-and-child relationships amongst animals and humans.

This article explained who the artist may have been of the Venus of Willendorf, a woman. Several modern pictures were captured of a pregnant woman looking at herself from different angles. They then were compared to different views of the statuette. The authors hint that the proportions of the figure can only be related to by a pregnant woman. During pregnancy, the lower body is not visible by the woman due to her protruding stomach. Therefore, the narrowing legs and disproportionately small feet make sense. The Venus of Willendorf is essentially a self-portrait of the artist. The authors also researched that this particular statuette belongs to a group of others that are similar. They were all carved by members of a cult of human fertility. Also, the idea that the figures were part of obstetrical aids helping to track the progress of the woman’s pregnancy was explored.

This source was particularly useful in describing the discovery and physical description of the Venus of Willendorf. Faber provides that the figure was discovered in Austria near the town of Willendorf. Scholars named it after Venus, who was the Roman goddess of love, often depicted as nude. The statuette is small, measures as only 4 ¼ inches high, fitting in the palm of one’s hand. Faber states that it comes from the Paleoltihic period, also known as the old stone age. Scholars assume that the artwork is dated between 20,000 and 30,000 BCE and is made of limestone. Faber contrasts the Venus of Willendorf to the Venus de Milo. Although they are from different periods the image is the same. The Venus de Milo is often depicted as elegant unlike the Venus of Willendorf because of the size and roughness of the surface.

Jewell, R. 2002 “Mythology-Stories of Who We Are” http://www.tc.umn.edu/~jewel001/humanities/book/4mythology.htm Jewell shares a religious aspect of the Venus of Willendorf.

He supports the idea that the statuette was an object used in fertility rituals. That is why there is no importance to the face, only the exaggerated development of the breasts, stomach and thighs. The narrowing of the legs and feet allow for the figure to be inserted into the ground. Jewell shares that evidence suggests many early cultures believed in some kind of female fertility power or beings. He backs his claim with research of cave drawings and other nude female figures from the same period. Jewell sites that Anna Freud and Esther Harding have discussed the religious role women played in dancing, singing and chanting to a female power or deities. The figure was probably sculpted during a time when females had a higher role in society. Hornblower, G.D. 1929. “Predynastic Figures of Women and Their Successors”

Hornblower writes an article describing another researcher’s thoughts of the Venus of Willendorf, Mr. Shattock. His article is useful to rule out steatopygy of the figurine. Mr. Shattock disagrees that the statuette suffers from steatopygy. He states that the term should only be used for enlargements where the thighs alone are excessive or the body in enlarged laterally. The simple fact that the Venus of Willendorf has broad hips makes his idea correct. Therefore, the statuette suffers from obesity. Shattock concludes because of this fact, there can be no comparison between ancient and modern day people, nor can there be correlation between their race.

Jennett writes an interesting article and notes how the vaginal area of the Venus of Willendorf is very much detailed. The arms of the figurine cross over her enlarged breasts and she has no facial features. However, unlike the previous articles I have read, Jennett does not justify the meaning of these characteristics. Jennett has finally given a more in depth answer about the figurines discovery. She cites, the figurine was found in Austria “in an Aurignacian loess deposit in a terrace about thirty meters above the Danube river near the town of Willedorf” in 1908 by Josef Szombathy (Witcombe 2003; McDermott 1996:233). Jennett gives the age of the Venus of Willendorf as 20,000-18,000 BCE and states that it can be contested up to 24,000-22,000 BCE (Witcombe 2003). Jennett also cites another detail of the figurine that was interesting, it appears that the Venus of Willedorf had been “painted with red ochre” (Marshack 1972:288). She describes red ochre as a “symbolic substance commonly found in connection with burials and gravegoods from the same time period”. (Jennett, 2008)

Ogborn’s article describes in great detail a list of theories presented by many researchers about the purpose of the Venus of Willendorf. He states that some theories call the figurine a “Mother Goddess” meant to represent the fertility of crops and future society. He cites Margaret Ehrenberg who believes that is false when considering the belief systems of the forager societies “who are closely in touch with the natural world and whose own social systems are based on greater equality than that of later socially stratified societies, typically center on general spirits and forces, rather than personified gods and goddesses (74).” Darwin suggests that before patriarchal societies existed, females had predominant roles. Ogborn states that LeRoy McDermott believes the figurine was one of many carved by a woman, representing herself. The product was then used as a learning tool for younger generations to tell of the changing stages of a woman, “maturation, menstruation, copulation, pregnancy, birth, and lactation”. Another more abstract theory is presented by Clive Gamble. He believes that the Venus of Willendorf could easily have been part of a group of female figurines. Gamble cites, “that the figurines were left as markers in open areas during the zenith of glaciation for other nomadic peoples while one-tribe retreats to regional caves.

Venus of Willendorf: An Annotated Bibliography. (2016, Apr 03). Retrieved from https://studymoose.com/venus-of-willendorf-an-annotated-bibliography-essay 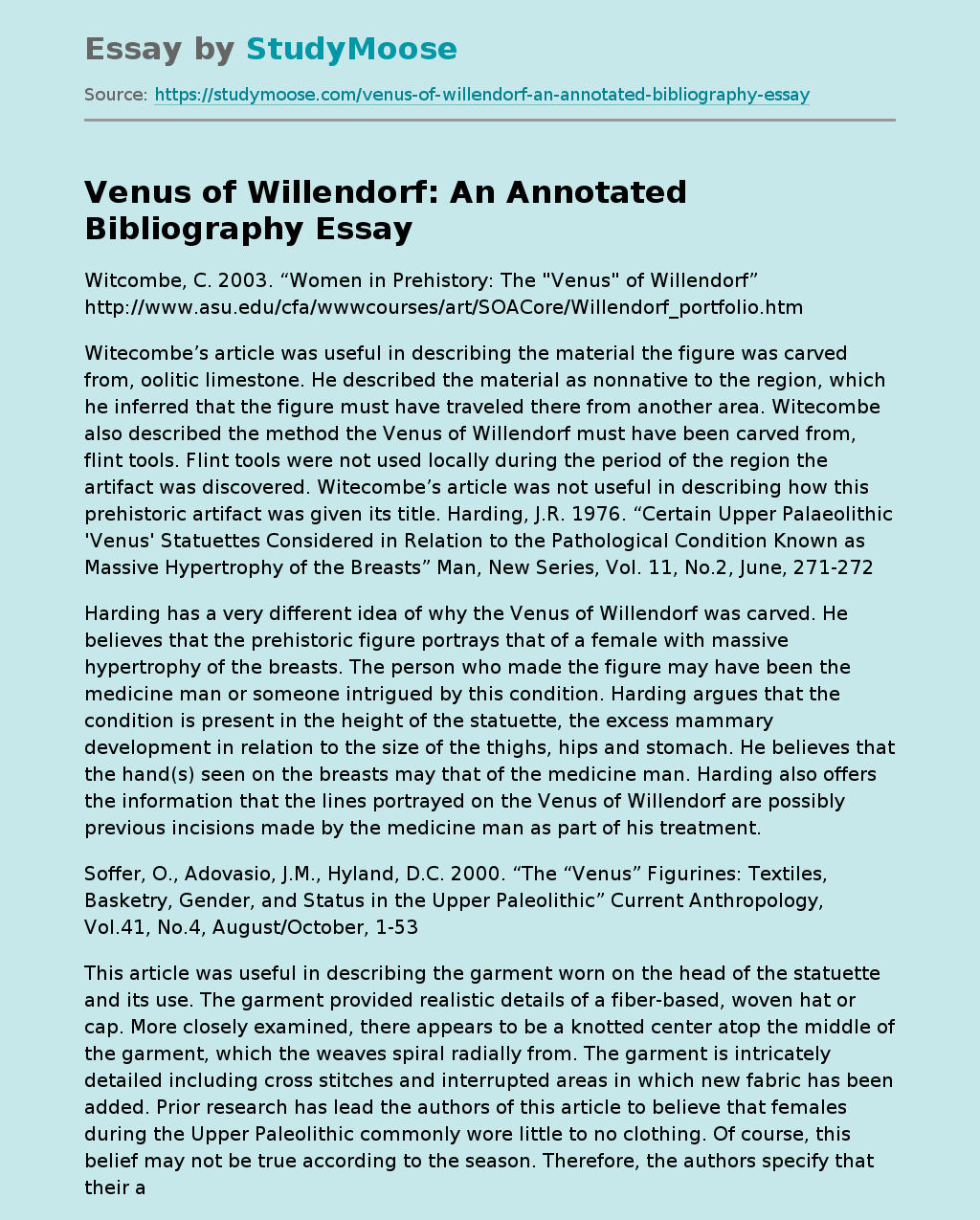