Basic Life Support or BLS is that level of medical care for those in a life-threatening situation until the arrival of proper medical care. BLS can be provided either by emergency medical personnel, trained medical professionals or by laymen trained in BLS. The techniques in BLS are mainly focused on airway maintenance, breathing and circulation. Use of automated external fibrillator or AED for defibrillation is a recent advance in BLS and has resulted in improved cardiac survival in cardiac arrest cases.

Don't use plagiarized sources. Get your custom essay on
“ Ventricular Fibrillation as Treatment in Basic Life Support ”
Get custom paper
NEW! smart matching with writer

This new intervention is important because majority of the deaths in cardiac arrest cases are due to ventricular fibrillation which can be reverted using a defibrillator in the electrical phase of ventricular fibrillation. Thus, basic life support consists of chest compressions and ventilations and also early defibrillation. Advanced Life Support or ALS is that form of medical care prior to reaching hospital and which can be delivered only by trained medical personnel or paramedics.

Whether BLS or ALS is critical in improving outcomes in cardiac patients is a much debated topic.

The authors recommended that cardiopulmonary resuscitation by bystanders and rapid-defibrillation responses must be encouraged and should be a priority for EMS resources.

Every minute of decrease in the arrival of ALS following delivery of BLS was associated with 4% decrease in survival chances. The authors concluded that shorter BLS-to-ALS time is associated with increased survival chances and hence ALS interventions must be utilized for additional benefits. However, the researchers pressed the need for early CPR and defibrillation which is BLS. Different reports were produced by an old study by Bissell et al (1998). This study reviewed extensive literature pertaining to delivery of ALS and BLS to cardiac arrest patients.

Of the 51 articles reviewed, eight articles reported that ALS was in no way better than BLS; seven reported that ALS was effective in some application and the remaining articles concluded that ALS was superior to BLS. The researchers concluded that ALS may be clinically superior to BLS in some patients with certain pathologies. Despite different clinical opinions, it can be said that BLS plays a critical role in the survival chances of a cardiac arrest patient. There are 2 reasons for such an impression. 1. Any bystander can provide BLS if he or she has received some amount of training in BLS.

2. Most of the cardiac arrest cases are due to ventricular fibrillation and defibrillation is “the treatment” for that condition Current studies being conducted into new methods, drugs and/or equipment being studied to improve cardiac survival. Over the past few decades, many new methods, drugs and interventions have been introduced to provide optimum support for patients with cardiac arrest so that the chances of survival are enhanced. Every year, newer approaches are coming up to provide the best possible care for cardiac patients.

Research has shown that when CPR is continued with gloved hands during defibrillation, there is absent or minimal shock to the resuscitator (Roppolo et al, 2009). According to the American Heart Association (2005), in children, the chest compressions must be provided at the rate of 100 per minute without any interruption for respiration. According to a study by Bobrow et al (2008), implementation of minimally interrupted cardiac resuscitation increases the survival-to-hospital discharge in those who suffered cardiac arrest out of the hospital.

A recent research proved that ‘noise reduction’ automated external defibrillator and cardiac monitoring analysis can allow certain advanced devices to distinguish a CPR infarct from V-fib (Roppolo et al, 2009). Another new approach aimed at cardiac survival is the cardiocerebral resuscitation or CCR. This method is mainly composed of 3 aspects: continuous chest compression by bystander, new EMS algorithm and vigorous post-resuscitation care. There is no mouth-to-mouth breathing in this approach. 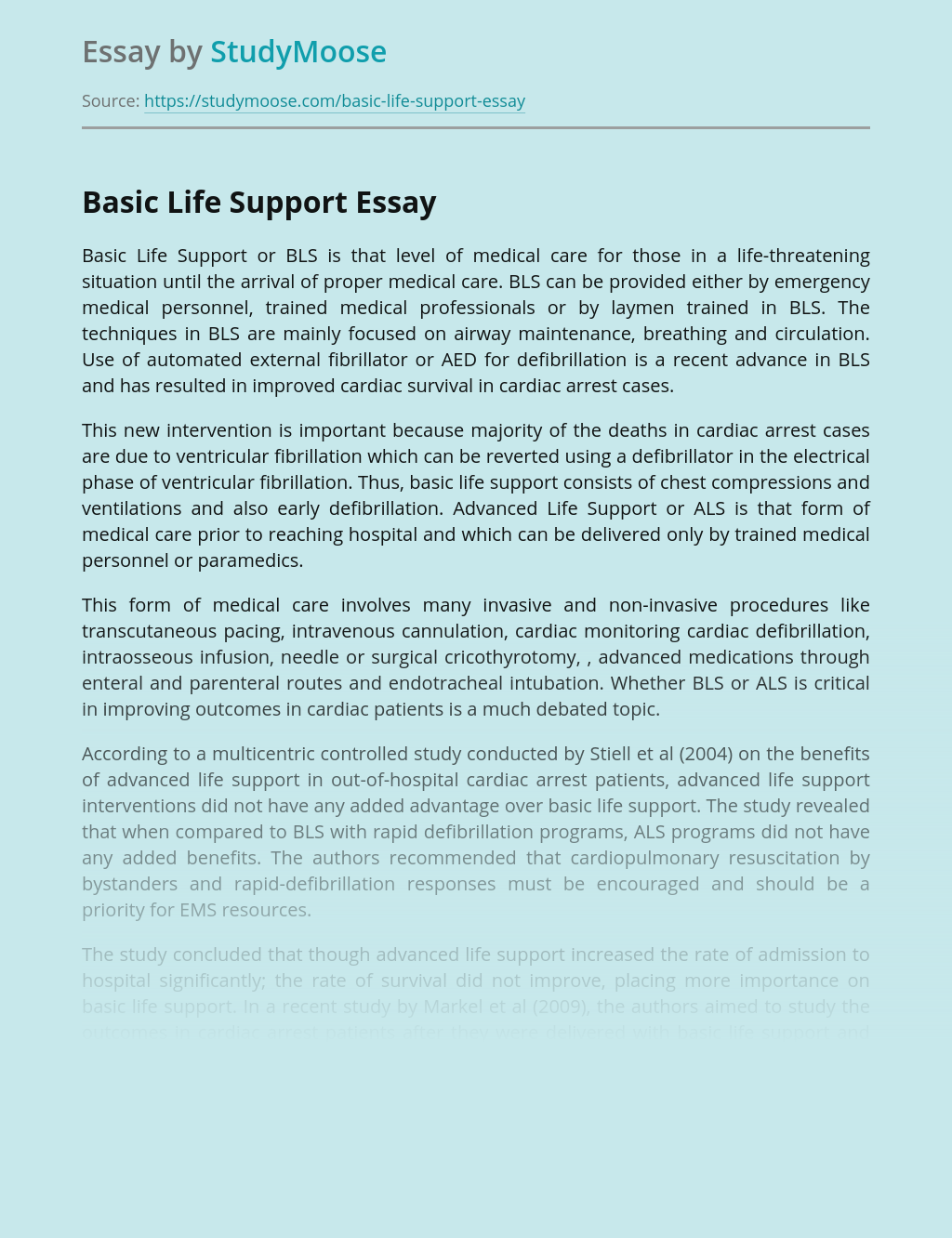