Vanity Fair, an English novel written by William Makepeace Thackeray (United Kingdom: Punch Magazine, January 1847 – July 1948), epitomizes the early 19th century of British society of the duplicity of social climbers, sabotages, avarices, lovelessness, pretentiousness, selfishness. It, at the same time, captures mix pack of emotion of people who have their origin and counterpart in society as a whole. Furthermore, it is a satirical expose of William’s masterpiece which exposes every chunk of the repulsive truth in the real society, not only in the 19th century, but also in our contemporary world.

Don't use plagiarized sources. Get your custom essay on
“ Vanity Fair ”
Get custom paper
NEW! smart matching with writer

In the story Vanity Fair, it depicts a few decades time of a group of British people’s life in 19th century. The novel opens at Miss Pinkerton’s Academy, where we are introduced to Amelia Sedley and Rebecca Sharp (Becky), the novel’s female protagonists. Amelia and Becky are friends, but they are completely the opposites. Amelia is kind and innocent and comes from a loaded family. Becky, in contrary, is cunning, clever, and scheming and emerges from a deprived condition.

The story continues when Becky spends her time at the Sedleys and ingratiates herself into the family and tries her best to entice Amelia’s brother, Joseph, an obese inept man. She practically succeeds her attempt, when George Osborne presents and foils this plan; he intends to marry Amelia and does not want a governess for a sister-in-law. Then, Becky works as governess at Queen’s Crawley, and marries Rawdon Crawley, second son of Sir Pitt Crawley.

Consequently from this marriage, Rawdon’s rich aunt, Matilda, disinherits him. Meanwhile, Amelia pines over George, who disrespects and disregards her while he is in the military.

Dobbin, George’s closest friend who is also surreptitiously in love with Amelia, begs him to treat her kindly. George eventually agrees to marry Amelia, but just as his father prophesied, the Sedleys come to business crisis. George’s father disowns him because of the marriage. Both couples endeavor to live arduously. Sadly, George dies in the battle field at Waterloo. Both Amelia and Becky deliver babies. Amelia sends Georgy, her son, to live with the Osbornes because of her dreadful situation. When Sir Pitt dies, young Mr. Crawley, Rawdon’s elder brother, inherits the estate and Aunt Matilda’s money.

Becky again ingratiates herself with a man named Lord Steyne, who brings her out into high society. After Rawdon discovers that Becky neglects to get him out of prison, where he has landed himself for unpaid debts, he is finally convinced that money means everything to Becky, and he finally decides to leave to Coventry Island where he dies of yellow fever. At the end, Dobbin returns to England, and he finds Amelia. Dobbin stays to help Amelia care for her son. Mr. Osborne dies and leaves his money for Amelia and Georgy, and three of them set off to Europe, where they find Becky.

Becky confesses to Amelia that she had been developing a relationship with George, and Amelia finally sees George for who he really was, and marries Dobbin. I was feeling excited and miserable simultaneously by the author’s writing that truly indicates about social discrimination, emphasizing on wealth and social rank/status, which immensely reflected the reality world. I learned that everything is all about the prominent reputation: “If Mr. Joseph is rich and unmarried, why shouldn’t I marry him? I have only a few weeks, to be sure, but there’s no harm in trying”(P. 3 L. 2) Becky wanted to climb up from where she was, the place she did not really think she belongs to, by seducing and alluring a rich guy.

Although, she didn’t succeed at first place, when George ceased the marriage on the account of not wanting a governess for sister-in-law, still she perfectly managed to scheme her way up to the top of the heap without demonstrating and being cautious about morality; she used all her adeptly cunning and deceiving ability to obtain what she desired; social ranking and money. Moreover, the marriage of Amelia and George was undermined by George’s father.

It infers that social status and wealth can determine everything, it even thoroughly eradicates your massive effort: “In fact, unless Sedley’s can pay me ten thousand pounds now, there will be no marriage between you and Amelia Sedley. ” (P. 24 L26) I was really upset with this false values and practices of society, even though I know that there still exists in our real world. However, the author did not just portray one side of a thing, he also provided the mixture of evil and good in the story, just as in our recent real contemporary world. There were some good people such as Amelia, Lady Jane, William Dobbin and more.

Due to the good-naturedness and generosity of Amelia, she was truly loved by the gentleman, Dobbin throughout the whole story. “I have loved and watched you for fifteen years,” (P. 110 L2) At the end of the story, I could see that they lived happily ever after, except for Becky who is so despicable that even her own son didn’t consent to have her as a mother, and she deserved it. It opens up my eyes and makes me realize that you may encounter some horrendous time in life, but once and for all, you will be rewarded from what you have conceived.

I also caught the book so very interesting of how the author has created the factual truth by implying the power of charm and beauty can sometimes be unpredictably venomous. According to the book: “In fact, he was convinced that Becky was in love with him, unable to resist such a handsome, charming fellow as himself” (Page 43 Line1) It obviously showed that Rebecca has successfully concocted trap to deceive George to fall for her and gained all the benefit to herself by pulling George to play porker with her adept husband.

These are all done by the adeptly ingratiating and the undoubtedly talented nature of a person. After I read this story, I was once again alarmed to see that a person like Becky can be so meretricious she can take advantage over other people around her just to achieve her falsely audacious goal. To my perspective, I strongly admire her aptitude in manipulating and convincing other to be enthralled by her charming appearance in order to survive in the high society: “George thought Becky clever, amusing, stylish, and altogether delightful. (Page 32 Line15)

However, I am extremely repulsed and disgusted by her achievements. From what men have observed and understood, they should be cautious with the woman like Becky, even though they usually fail in doing so and eventually get poisoned by the delicate little venomous snake. “What a slippery little snake that woman is! ” (Page 42 Line14) As Khmer old saying say that women are full of tricks (not necessarily all are bad) and Rebecca is definitely one of those.

Not to be harsh to women, but I am not saying that all women are not trust-worthy, yet for men, we ought to be aware of what women are capable of doing and not be too hasty to trust someone. As living in Vanity Fair, money, possessions and positions are being enormously valued more important than human beings. The setting could be applied in modern times, and it can still be true today. There are many people who are constantly trying to reach the top of the heap, selling themselves for popularity, money, or position, and some fighting over money/inheritance.

However, people will eventually realize that those things will not remain immortal. Last but not least, the author wants to inform us that although we may live in vanity, the greatness of reputation and possession, it does not mean that we are slaves to its values, which in the final analysis turn into futility and emptiness. We should value more on the relationship, harmony and loyalty that are not easily attained. “Vanity Fair” is a long yet worthwhile reading. From my perspective, “Vanity Fair” is a classic and must-read novel that you would not want to miss reading it. 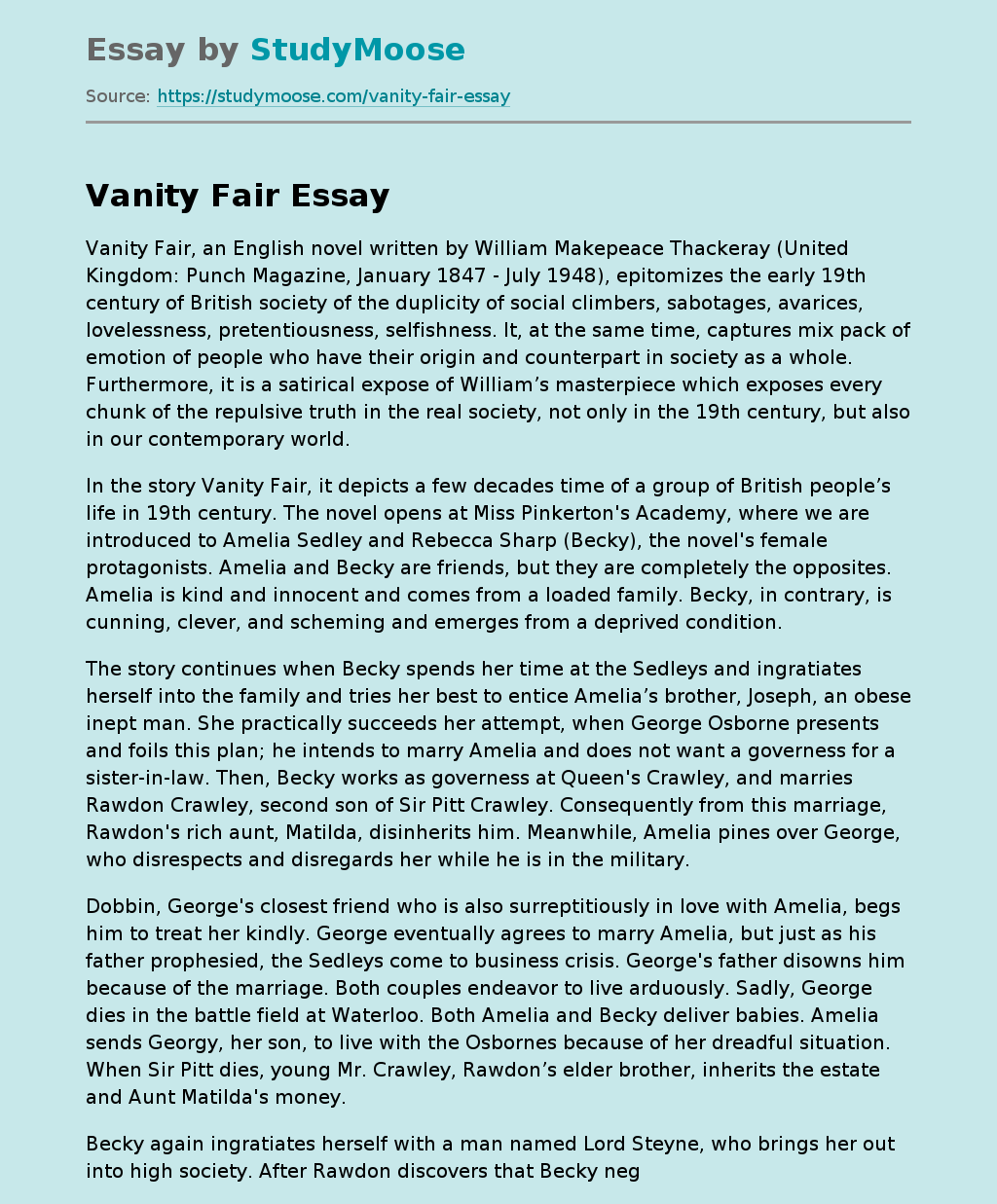