Vandalism……
Teenagers are the generation that will colour the future. They are exposed to many things that can affect their behaviour either to be the good person or not. Nowadays, we can see there are many problems among the teenagers, especially the social problem. Gangsters and vandalism are the example of some of these problems. Nevertheless, the heavier problem among teenagers nowadays is vandalism. According to “Vandalism,” (2008) “vandalism is the intentional abuse, damage or destruction of any portion of someone else’s property or common or shared property such as our residential facilities, furnishings or public property.

Turn in your highest-quality paper
Get a qualified writer to help you with
“ Vandalism ”
Get high-quality paper
NEW! AI matching with writer

” Why teenagers tend to become a vandalism because they try to express themselves, seek for attention and they tend to follow their friends behaviour It is a known fact that the problem that cause teenagers involve in the vandalism is they desire to express themselves. It may happen because they are having a problem in their life and they do not have self-esteem to face the problem.

Sometimes parents are not concern to them and it might cause the teenager involve in a bad behaviour. So that, they want to express their feeling by get involve in vandalism. It can result the bad problem to the teenager and also can considered bad in the eye of society.

It became more serious when the teenagers rebel in the society. Secondly, the problems that always leads teenagers to do vandalism is they want to be the attention seeker. It is maybe their parents did not give enough attention to them due to a lots of work to do or even their parents is kind of parents that not care about their children.

It is because parents nowadays have a bunch of work to do such as doing the house chores, manage their childrens and their commitment to their work and society. In order to get back their parents’ attention, they will do the vandalism, so their parents will give attention to them. Vandalism can be harmful if we not prevent it from the earlier. According to the DirectGov (n.d), the effects of the vandalism is costs you money which is you need to pay for vandalism repair through higher taxes and insurance payments. Next problem is teenagers tend to follow their friends behaviour. If they are friends with the person who has a bad attitude, they will be influence by the negative things. For example, nowadays we can see most of the public amenities had been destroy because of vandalism. Although the criminal had been caught they still do the same things. They tend to believe that they are correct but unfortunately it vice versa. Besides that, teenagers often do not think wisely before they take an action.

They always think to have an enjoyable moment with their friends without think about the consequence of what they have done. As an example, teenagers will never say ‘NO’ when their friends ask them to do an amazing thing without thinking the effect that they will faced next. Other than that, teenagers do not have strong principle inside themselves. They always follow what their friends do, such as destroy public facilities and so on. One way to solve this problem is government should provide an event for teenager to guide them and give them explanation what the effect to the teenager when they get involve in bad behaviour such as vandalism. Other than that, the government should do more activity that is appropriate to the teenager that make they realize the importance to prevent the problems of vandalism. Parents also should give their teen children support to make their self-esteem in good condition and parents should not to make them pressure but, parents should give the best guide to make they prevent this problem.

For the best solution that we can suggest is the teenagers must choose the right friends. In order to choose the right friends, teenagers must know how to differentiate between good and bad things. On the other hand, teenagers should use their brain more effectively. This means they have to think intelligently before take an action as we know that we will get the effect for what we have done. Karma is around us. Last but not least, an important thing that one’s should have is a strong principle inside them. Each of us should have our own principle in our lives so that we cannot easily be influence by other people especially among teenagers that have a feeling to try new things.

It is evidence that vandalism among teenagers have tremendous problems if we cannot managed it wisely such as they try to express themselves, seek for attention and they tend to follow their friends behaviour. As we know, vandalisme problems are common teenagers nowadays and rise time by time. This bad attitude maybe affected by teenagers who want to try new things in order to expressing their feeling. Actually, it is common among the teenagers tend to become like rebel or to show their feeling about something. As according to the most recent Office of Juvenile Justice and Delinquency Prevention Fact Sheet on Juvenile Vandalism(2000), vandalism is malicious destruction, injury, disfigurement of any public or private property, in real or personal without the consent of the owner having custody. Attention seekers may also be one of the reason that lead to the vandalism. Parents obviously thinks that there is normal if they just leave all the matter to their children rather than cares about them. As a results, they tends to follow their friends attitude without think it wisely. Hence, it is essential that parents and the government to make a strong coorperation in order to prevent the same problem occur again. 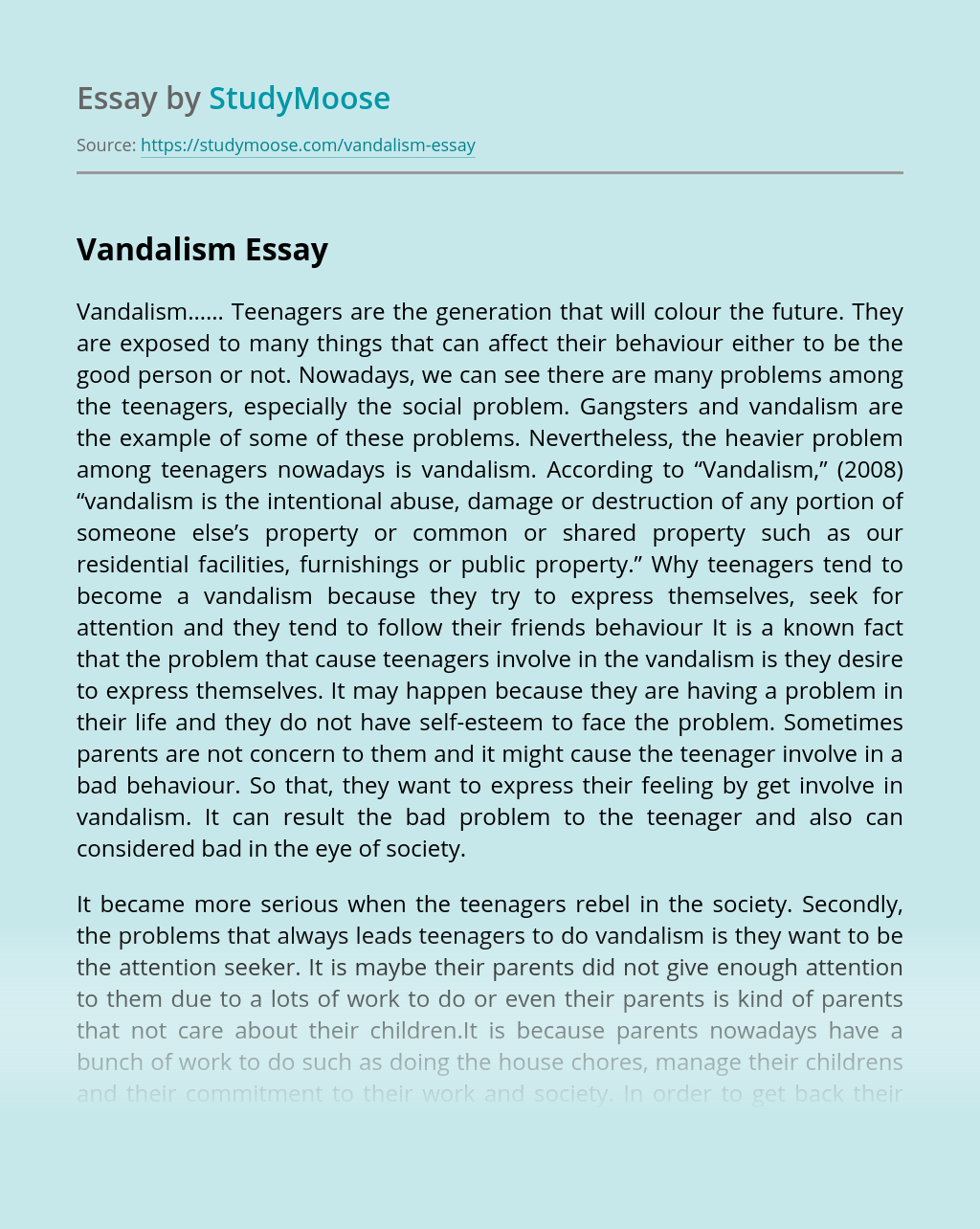 Turn in your highest-quality paper
Get a qualified writer to help you with
“ Vandalism ”
Get high-quality paper
Helping students since 2015
Stay Safe, Stay Original