Values Clarification of a Hospice Nurse

To Admit or Not to Admit As a hospice admissions nurse, I have been involved in several situations where my values were put to the test. The values I have accumulated through the years have provided the foundation for how I practice as a nurse and have shaped the way I live my life. Situation One such instance that stands out is my encounter with an 81 year old female who had the diagnosis of multiple myeloma. Our meeting took place at the hospital, which is where she had been in and out of for the past year.

Don't use plagiarized sources. Get your custom essay on
“ Values Clarification of a Hospice Nurse ”
Get custom paper
NEW! smart matching with writer

She had received many blood transfusions that initially occurred about every month or two.

It began to progress to every other week and then closer to every week. As I entered the room, I could not help but notice the smile on the frail woman’s face. It was one of those smiles that warms an entire room and immediately puts you at ease.

Before I had a chance to introduce myself, she asked if I was the one coming to talk to her about hospice. She said her daughter would be there in about an hour, but she had many questions so she did not want to wait. We began our discussion about hospice services and the philosophy behind it. The patient shared her story with me and how she got to this point.

She then proceeded to explain that she was not ready to give up her fight and that she believed she could get stronger.

She explained that she had a granddaughter that was pregnant and she could not wait to meet the new baby, even if this is all she got to do. The patient thanked me for the information I provided and then declared that she was not ready for hospice yet. I was touched by her desire to fulfill her goal. I left the patient’s room feeling better than when I arrived and I was supposed to be there to offer her assistance. I finished up my notes and was about to leave the floor when the patient’s daughter approached me.

She requested we speak alone, so we went into the chapel area. I began by explaining that her mother had decided not to pursue hospice, but I would happily go over everything with her so when the time came she would know what to expect. The daughter became visibly agitated. She explained that she had been bringing her mother in and out of the hospital for too long and it was time. She continued to explain that she had Power of Attorney (POA) and was deciding not to pursue any more aggressive treatment. She stated “My mother is going on hospice”.

I tried to clarify that as long as the patient was alert and oriented, she could continue to make her own decisions. She then informed me that she had a Letter of Incapacity for her mother, therefore she could decide. She went on to say that she knows her mother is tired of living this way and once she explained everything her mother would agree. Her blatant disregard for her mother’s decision made me nauseous, angry and despondent all at once. I politely excused myself and told her that we would need a copy of the incapacity statement and any Advance Directives that she had for her mother.

I went to the nearest phone to call my director to determine what I was supposed to do with this situation. I was asked if the patient met criteria for hospice, to which I replied yes but she is not ready to make that step yet. I was then told to wait until the daughter got a chance to speak to her mother to determine what the outcome would be. Approximately fifteen minutes after the daughter returned to her mother’s room, she emerged stating her mother wanted to speak to me. It took just mere minutes for the patient to reverse everything she had previously said.

She was now tired of the revolving door to the hospital and did not want to burden her family with the stress of her illness. She said she had no quality of life left. Astounded, I repeated back the reasoning she had previously given thinking she possibly forgot. She replied that she had not thought it through and now she was certain. I placed the referral on hold to allow all of this to be absorbed. The case was followed up on the next day by someone else. Ultimately, she was admitted into hospice. My Challenged Values

Responsibility, respect, freedom, compassion and commitment are all important values that were challenged. I felt responsible to respect the patient’s decision and allow her the freedom to choose how she would live the remainder of her life. I have always taken pride in the compassion I have for my patients. I believe it is important to be empathetic and show kindness to be the best nurse and person I can be. My commitment to my patients and my practice are always what I base my decisions on. These are the values that I have ascertained and have tried to live by.

My values were instilled in me at a young age by my grandmother. She was an inspiring woman who raised me when my parents were unable. One of the last things she taught me before she passed was to always value yourself. You must respect and value yourself before you will be able to truly do the same for others. I believe my director valued family dynamics and the importance they play. She stated that there are always unknown factors with families that influence behavior and decisions. The patient seemed alert and oriented to me, but she had been previously diagnosed with dementia.

There is no way to know if I had gone into that room at a different time if I would have had the same conversation. The patient’s daughter valued her knowledge of the situation. She stated she had been bringing her mother in and out of the hospital for a very long time. She experienced all the ups and downs that her mother’s health has endured. I was a stranger walking into a situation that had no previous knowledge of that specific patient. She knew what her mother had gone through. Response Apart from the physical manifestations derived by emotions, my feelings regarding this situation remain the same.

I believe we all deserve the respect to make our own decisions and that those decisions should be honored. As a nurse, it becomes my responsibility to be the patient’s advocate. I know the patient’s quality of life was fairly poor at this point and I know her outcome either way was poor. I also know she told me she had a goal of meeting her grandchild and it seemed very important to her. Looking back, I am not certain I would have done anything differently. Conclusion The development of my values occurred over time. Some were learned from family, others were gained from experience.

Patient care is the setting where all values will be utilized and challenged. I believe the value I place on respect for each patient has played a significant role in the care I provide. I respect the patient as a unique individual and their values that guide their choices. Respect for different belief systems, cultures, ethnicities and sexualities are necessary to be an effective caregiver. Patients usually are not in a healthcare setting because they want to be. They are there because they need help with a particular issue or issues.

People can be vulnerable when they are in an ill state. Compassion becomes a necessity. It is up to us to promote healing and hope as best we can without bias. It has been my experience that genuine concern for the patient can go a long way in building trust. The patient is more likely to speak freely about what is going on and to listen to information provided if he or she believes someone really cares. I do not believe it is necessary to agree with each patient’s choice or values, but I do think it is essential to listen to each patient and respect why he or she made that decision.

The values that I have acquired produced my specific reaction. Each person carries with them values which would make their encounter unique. Others may not have had any problems with this situation because the patient and daughter agreed in the end. This is where values come into play. Every day that I go to work I encounter a difficult situation. It has strengthened me as a nurse to be allowed to help people through such difficult times in their lives and I would not trade one experience.

Values Clarification of a Hospice Nurse. (2016, Nov 05). Retrieved from https://studymoose.com/values-clarification-of-a-hospice-nurse-essay 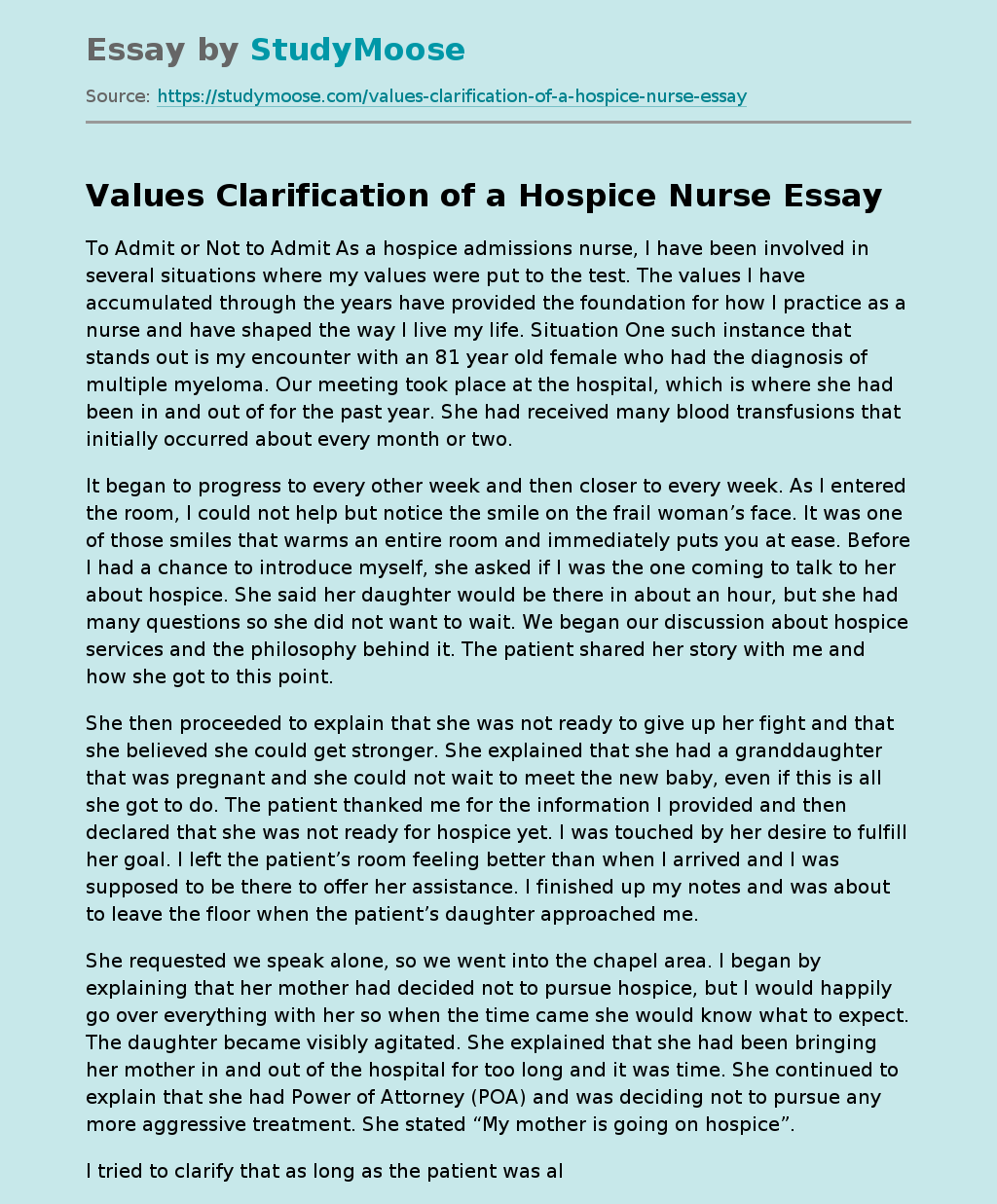