People ought to have a right not to vaccinate their kids, even if refusal to do so puts one’s own kids at risk, along with other people’s children. Do you agree?

Childhood immunisation must be one of the most significant public health advances in medical history. Thanks to vaccines, children and teens that have been immunised would not have to experience the abhorrent epidemics like polio, mumps, measles and smallpox the older generations did. While it is safe to assume vaccines are here to stay, critics have presented damning yet unverified accounts of the ineffectiveness and harmful side effects of vaccinations urging parents to second guess their choice to immunise their child.

The act of immunisation itself is the process of equipping one’s immune system with an immunological memory by introducing a weakened foreign molecule to the body that orchestrates an immune response that the body later uses to protect itself against an attack by said foreign molecule.

Immunisation has been under constant fire since its inception in the late 1700’s with the introduction of the smallpox vaccine. People believed that the smallpox vaccine could literally turn vaccinated people into cows because the vaccination for smallpox was inducted from cows (William and Gunn, 2004): There was a famous Gilray cartoon [of vaccinated people sprouting cow heads in] 1804, which I always interpreted as people just being concerned about the source or purity of the vaccine. But they weren’t. They were concerned that they or their children would actually turn into cows.

(Melnick, 2011) This proves that people’s views in regards to the ineffectiveness of immunisation are not always logical thus bringing to light the question of whether or not parents should be allowed to decide to or not to vaccinate their children, bearing in mind parental and social responsibilities.

Parents should have the right to be aware of all the risks and advantages involved and understand for themselves that the pros far exceed the cons. People tend to be misled, in the scurry to do the best for their children, by other parents and antivaccine activists who base their beliefs on unproven, board dismissed studies and theories. One such theory brought to life by a British gastroenterologist Andrew Wakefield who claimed to have discovered a strong co relationship between the MMR (Measles, Mumps and Rubella) Vaccine and autism: Wakefield based his conclusions on a case study of a dozen children who’d been brought to his clinic at the Royal Free Hospital in London. Almost immediately, Wakefield’s research methods and his interpretations, which had been published in the medical journal The Lancet, came under fire. Wakefield’s response was to appeal to the public rather than to his colleagues: The medical establishment was so determined to discredit him, he said, because he threatened their hegemony by taking parents’ concerns seriously.

The media took the bait, and despite Wakefield’s lack of proof and his track record of dubious assertions and unverified lab results, they began churning out stories about how a maverick doctor was trying to protect innocent children from corrupt politicians and a rapacious pharmaceutical industry. Within months, vaccination rates across Western Europe began to fall. (Mnookin, 2011) Wakefield’s research was based on a very minuscule percentage of the entire population thus rendering unreliable. Despite the G.M.C’s (General Medical Council) dismissal of his studies, Wakefield utilised the media to manipulate paranoid, confused, gullible parents into depriving their children of the MMR vaccine. As a result, incident rates for two out of the three diseases increased significantly in the UK rising from 56 confirmed cases in 1998 to 449 cases within the first five months of the year 2006 with the first death since 1992. (Asaria and MacMohan, 2006)

Since the wake of Wakefield’s MMR-Autism theory, issues have been raised linking thimerosal (a preservative containing ethyl mercury) to the cause of autism. Mercury is a known neurological hazard but the quantity of mercury present in vaccines then were ‘around 50micrograms 0.5 per-ml dose’ (Biba, 2009) which was ‘far short of toxic.’ Although the Centre for Disease Control (CDC) and the American Academy of Paediatrics (AAP) publicly suggested the subtraction of a mercury-based preservative called thimerosal from childhood shots in 1999 (Mnookin, 2011), the CDC has found no relationship between the MMR vaccine and autism after conducting scientific studies. (CDC Factsheet, 2004) (Melnick, 2011)Unsatisfied with the provided information parents tend to overlook proven statistics and rather look to their inner circles or celebrities with no knowledge of the background science, that have been given inappropriate media attention and ‘who have no new or credible data, and for which their assumptions and hypotheses have been discredited.’ (Poland, 2011) They risk contracting a vaccine preventable disease to avoid a different health issue they believe the vaccinations themselves will cause proving to be a dire lose-lose situation. ‘Such individuals are denialists at best and dangerous at worst.’

In addition to the autism scare, parents also worry about a concept known as ‘immuno- overload.’ This is when some believe, the injection of multiple immunogens (foreign agents) in one vaccine or even spread out, may overwhelm the immune system of a toddler/child. (Hilton, Petticrew and Hunt, 2006). This however isn’t accurate: Children are given vaccines at a young age because this is when they are most vulnerable to certain diseases. Newborn babies are immune to some diseases because they have antibodies given to them from their mothers. However, this immunity only lasts a few months. Further, most young children do not have maternal immunity to diphtheria, whooping cough, polio, tetanus, hepatitis B, or Hib. If a child is not vaccinated and is exposed to a disease, the child’s body may not be strong enough to fight the disease. An infant’s immune system is more than ready to respond to the very small number of weakened and killed infectious agents (antigens) in vaccines. (CDC FAQ) Parents are drawing their own conclusions of the importance of immunisation.

They presume certain vaccines are no longer necessary because there is no longer a threat. This is absolutely bogus. It is because of the vaccines the diseases that once swept out children and adults alike in the millions, are now invisible. If even a few parents stop vaccinating their children these diseases could resurface. (Biba, 2009) This generation of the pre-Wakefield, dubious parents, who have mostly been immunised themselves, have not witnessed the true calamity of the diseases the vaccines they withhold from their children, prevent. They have a diminished sense of urgency for vaccination. (Hilton, Petticrew and Hunt, 2006) Instead they choose to believe ‘…anti-vaccine books claim that all shots are bad, the diseases aren’t really anything to fear, and as long as you live a natural and healthy lifestyle, you don’t have to worry. I think this is a very irresponsible approach to the vaccine issue. Vaccines are beneficial in ridding our population of both serious and non-serious diseases.’(Sears, 2011)

Parents ultimately have a duty towards their children, but also have a social responsibility as a citizen. They have a right to be conscientiously involved in their child’s health and welfare. But as most parents choose to ignore the unbiased scientific studies that have been conducted, consult the internet for vaccine information. Anybody who has access to a computer has the liberty to free float their own thesis’ ridiculous or not, which appease to the parents unsatisfied with factual evidence which has become a serious cause for concern. (Haase, 2012) Combined with the self-reinforcing nature of online communities and a content-starved, cash-poor journalistic culture that gravitates toward neat narratives at the expense of messy truths, this disdain for actualities has led to a world with increasingly porous boundaries between facts and beliefs, a world in which individualized notions of reality, no matter how bizarre or irrational, are repeatedly validated. (Mnookin, 2011) Obviously, the more kids who are vaccinated, the better our country is protected and the less likely it is that any child will die from a disease.

Some parents, however, aren’t willing to risk the very rare side effects of vaccines, so they choose to skip the shots. Their children benefit from herd immunity (the protection of all the vaccinated kids around them) without risking the vaccines themselves. Is this selfish? Perhaps. But as parents you have to decide. (Sears, 2001) Parents may justify their decision to deny their child of immunisation over the illusion that it is for their own good, by riding on the herd immunity for protection. But with more and more parents succumbing to the bystander apathy, the levels of herd immunity thins resulting in ominous consequences. (John and Samuel, 2000) In reference to the question at hand, it is beneficial for the health of society that laws are passed to make compulsory the immunisation of children given the vaccinations are meticulously researched and tested for safety and effectiveness thus disagreeing with the statement provided. Vaccinations are a medical gift to the progressing world and should thus be taken advantage of. If you want to save your child from polio, you can pray or you can inoculate. … Choose science. (Sagan, 1997) 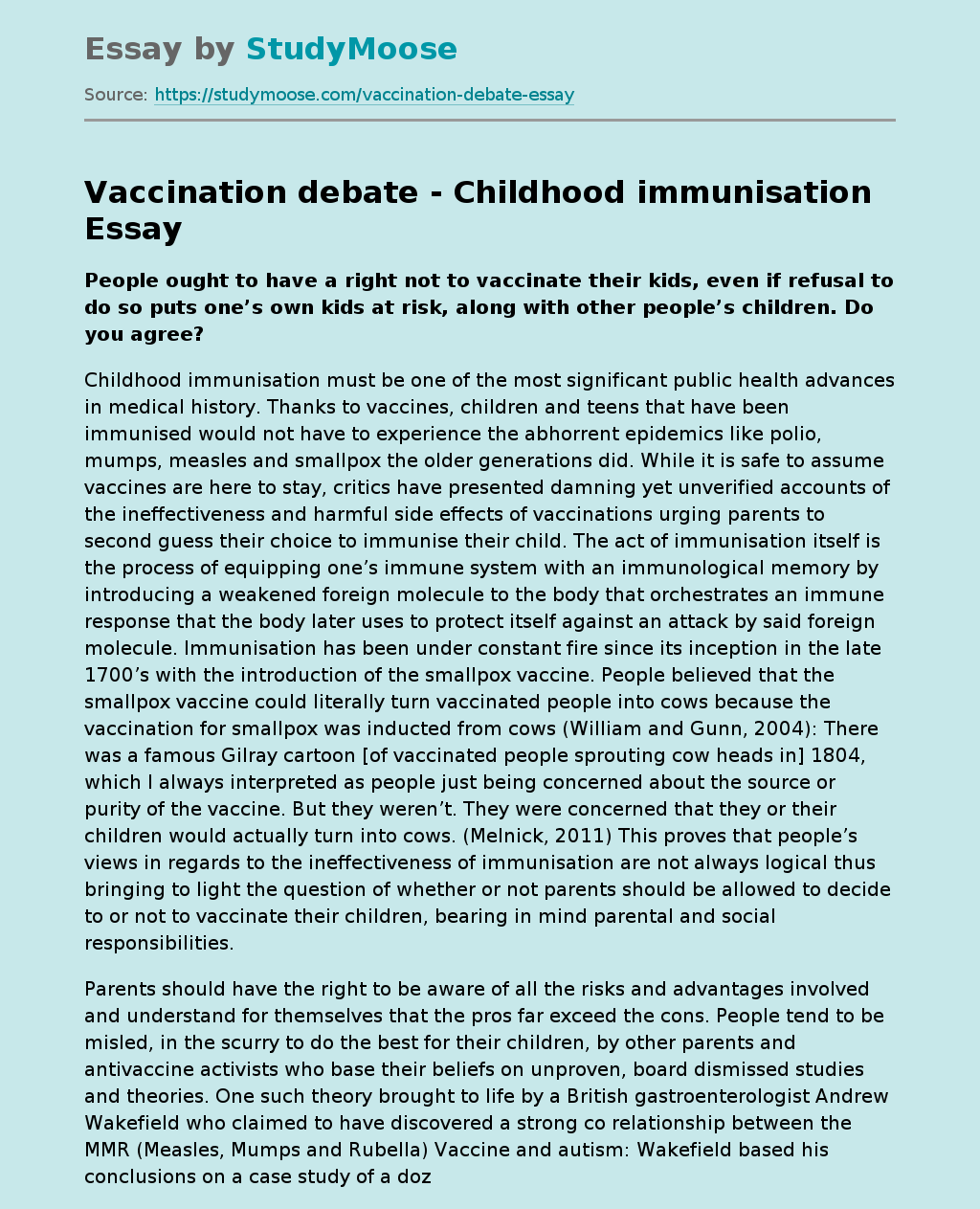