Ahmedabad, the city of Ahmed Shah (Medieval ruler of Gujarat), is known for its rich past and its association with the Mahatma (Great Soul) Gandhi. The city offers a unique style of architecture, which is a blend of Hindu and Islamic styles (Indo-Saracenic style of architecture). The monuments of Ahmedabad mainly date back to the 15th century. Ahmedabad has been known for its industry since medieval times. It used to be famous for its textile mills and hence often referred to as the ‘Manchester of the East’.

Don't use plagiarized sources.
Get Your Custom Essay on Vacation at My Home Town– Ahmedabad Just from $13,9/Page

City is located in the state of Gujarat, in the western part of India. It lies along the Sabarmati River. Ahmedabad is 440 km north of Bombay. The climate of Ahmedabad is hot and moist. Winters are cool and pleasant but summers are extremely dry, hot and the temperature can be as high as 120 F at times. The city experiences good rainfall during the monsoon season. So best time to visit Ahmedabad is during winters.

Ahmedabad is world famous because of Mahatma Gandhi’s Ashram (A place where devotees live), famous retreat and the nerve center of India’s freedom movement, It has a number of tourist points, such as tombs of Ahmed Shah and his queens, Jama Masjid, Mosque of Sidi Sayid, Teen Darwaza or Triple Gateway are major monuments. Other important monuments include, Rani Sipri’s Mosque, Raj Rabri Mosque and Hathee Singh Jain Temple. Kankaria Lake, Kutbi Mazar, Bhadra Fort, Dada-hari-di-Vav (an architectural step well), Victoria Garden, is also important places to visit. The walled city boasts of a number of ‘pols’ or traditional colonies, which date back to the 18th century.

Well place, which describe here you can easily find in any Tourist Guide book. But there is much more to see in this fascinating city. One of them is Akshardham (Haven) Temple. Akshardham is a place of education, entertainment and enlightenment. More than 2 million visitors visit annually, which include some well know personality like Former US president Bill Clinton, Prince Charles, Hilary Clinton etc. But remember, at Akshardham you will not go as tourist or a traveler, you will go as an explorer. An inventor, A sculptor. You will discover the art of sculpting yourself from within. You will be amazed when you see an architectural masterpiece that enshrines the golden Idol of Lord Swaminarayan, the great exhibition center that displays the values of Indian Culture, fifteen acres contemplative garden with cultural spots and a futuristic research institute for social harmony. Your trip will be incomplete without visiting this place.

I know as a tourist your second major attraction will be shopping. For Shopping in Ahmedabad there is great place to visit known as C.G Road. It is like Madison Ave of New York. This place is a shopper’s paradise especially if you like fabric such as exclusive saris (Traditional dress for Indian women), bedspreads, and other handicrafts, such as the city’s famous Zari (Gold/Silver powder) embroidery. This is the place for buying cloths & when you convert into US $ it will be very cheap. So for shopping keep CG Road in your mind. From Brand New Car to Cosmetics everything is available on this Road.

And yes your travel agent will never tell you but you should visit Ahmedabad during September- October. Because during this month people of Ahmedabad celebrate Navaratri festival, and you don’t want to miss it!

Navratri, meaning nine nights is a colourful and ancient festival honouring the Mother Goddess- the Divine Shakti (Power) who supports the entire universe. The costumes worn for the dances are traditional and extremely colourful. These dances start very late at night and end in the early hours of the morning. These nine nights city never sleeps. You will have lot of fun during this time.

You will definitely enjoy your vacation at this historic city with modern touch. I am sure Glimpses of Ahmedabad will stay in your memory for long time.

Vacation at My Home Town– Ahmedabad. (2016, Jul 03). Retrieved from https://studymoose.com/vacation-at-my-home-town-ahmedabad-essay 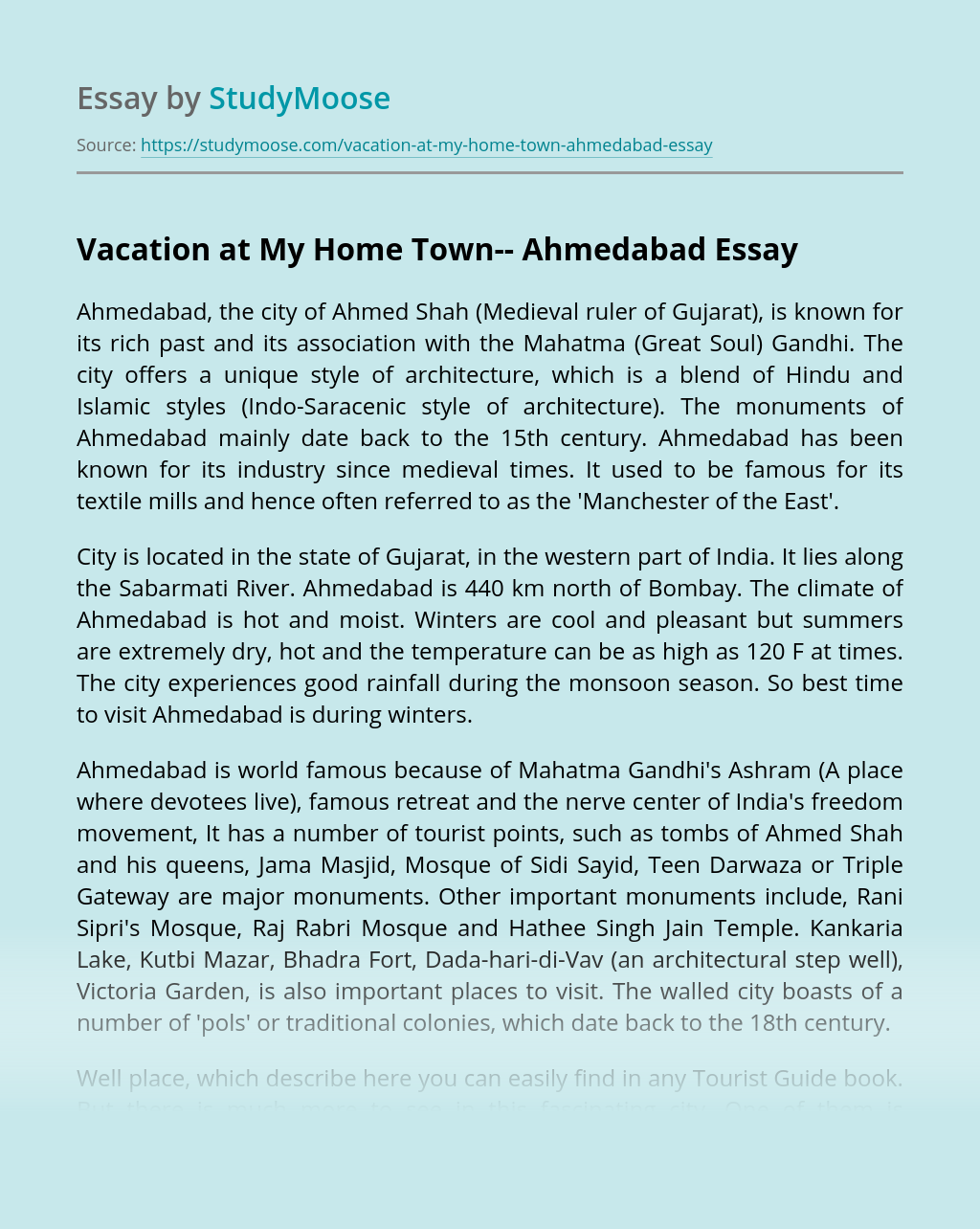 As per DSM-5, the basic component of over the top urgent identity issue is a distraction with organization, compulsiveness, and mental and relational control, to the detriment of adaptability, transparency, and proficiency. This example starts by early adulthood and is available in an assortment of settings. People with fanatical impulsive identity issue endeavor to keep... VIEW ESSAY

The debate over proper models to use in counseling is one that Dr. Larry Crabb focuses on in his book, Effective Biblical Counseling. He explores the relationship that people have with each other as well as with God. Crabb provides the readers with a variety of approaches that can be used with intergrating the word... VIEW ESSAY

View sample
What was the underlying cause of World War I?

There were many causes of World War I, but the three most important causes were militarism, imperialism, and alliances. World War I started in 1914, and it started off when the Archduke Franz Ferdinand of Austria was assassinated by a Serbian nationalist. This was a global war centered in Europe which started July 28, 1914 and ended November 11, 1918. After World War I ended more than 9 million... VIEW ESSAY

“ Got Milk? ” 1. You are the California Mike Processor Board (CMPB) and your advertising agency was the originator of the successful “got milk? ” campaign. Now all milk producers, including your competition are using the same advertising. How might you establish points of difference from your competitors selling milk? * Spread a new... VIEW ESSAY