Measurement Theory And The Foundations Of Utilitarianism

There are several theories which have been put forward by scientists to explain the actions of human beings and why people tend to behave in certain ways. One of the theories which have been put forward is the theory of utilitarianism (Weymark, 527-55). Utilitarianism is an ethical theory put forward by John Stuart Mill whereby he supports the value of utilitarianism in the society. Utilitarianism as describe by Mill is that it is a moral theory that is primarily based on the principle or view that “actions are right in proportion as they tend to promote happiness, wrong as they tend to produce the reverse of happiness” (Mill, 8).

Don't use plagiarized sources. Get your custom essay on
“ Measurement Theory And The Foundations Of Utilitarianism ”
Get custom paper
NEW! smart matching with writer

Happiness which originates from the actions undertaken by an individual is defined as the “absence of pain.”

Furthermore, according to Mills, there is difference in pleasure in terms of the quality as well as the quantity of pleasure that an individual may experience. Higher faculties, as observed by Mill, provide greater pleasure as compared to pleasure from baser faculties (Burgess-Jackson, 529-47).

Furthermore, Mill observed that the achievement of goals by people as well as ends such as good lifestyle is often counted as part of the happiness that those people enjoy (Mill, 8).

In addition, utilitarianism is considered as the principle of the Greatest Happiness whereby any actions that an individual undertakes are considered to be right as long as they generate proportional happiness to the individual (Mill, 8). If the actions by an individual instead of promoting happiness result in the opposite, that is pain, then the actions are deemed to be wrong.

The consequence of the actions that one undertakes is of great importance and is what matters under utilitarianism unlike the action itself (Weymark, 527-55). Any action, event, circumstance or even an experience is desirable for human beings if the final or end result or consequence is that it will lead to happiness (Mill, 8). Another example is in marriage. People get married since the end result of being in a marriage is considered to be happiness and therefore marriage within any given society is considered as a good action and always celebrated (Woodard, 246-65). On the other hand, death is an event in the life of human beings but the end result of it is pain to the people that are bereaved which mean that the act of dying is wrong under the utilitarianism theory.

I find that this theory of utilitarianism is very much applicable and makes a lot of sense in terms of helping us understand why people will take some actions and yet at some point there are people that may view the action as wrong (Burgess-Jackson, 357-85). Under utilitarianism, the action is only wrong if it results in pain and suffering and reduces the level of happiness but it is right if the end result is happiness and if it increases happiness. We are often faced with choices in life and what actions we are supposed to take.

From personal experience, I have always made decisions and undertook actions as a result of the end result that I will obtain. If the end result of a certain action that I am supposed to take is going to affect me negatively, I often forego the action and look for alternative. For example, I realized that if I decided to go to school and study, I will be able to get a good job and live a good life, which meant I will be happy with myself. If I choose to take on actions such as drug trafficking, I may get arrested and spend all my life in prison which will pain and suffering hence reducing my happiness (Weymark, 527-55). Based on the utilitarianism theory, I chose the action of going to school as the end results will help increase the level of happiness in my life unlike the other action of drug dealing.

Furthermore, this theory makes sense as it natural supports the sentiments of human beings which is found in their social nature. Human beings, we are social and always seek for happiness in all actions ad relationships that we build (Mill, 8). A woman would love a certain man and not another man because she perceives happiness with that person. According to Mill, a view which I fully support and makes sense is that, happiness is the only thing that people want in life and all the emotions, actions and activities that people go through or undertake are often directed at achieving happiness.

No one in this world wants to live a life of suffering and pain but all seek for happiness. I agree to this view based on an example of a sick man. When one is sick, and feels pain in the body, they cannot stay like that and just wait to die. Instead, people always seek the help of a doctor so that they can recover from the pain and enjoy the happiness of being healthy again (Weymark, 527-55). The action of going to a doctor for treatment is aimed at attaining happiness as the end result. Therefore, happiness is the center of human life and all issues in the life of an individual are directed towards achieving happiness, often with the benefit to the majority in mind.

Compared to utilitarianism, ethical egoism opposes by suggesting that people should be more self-centered and only undertake actions which will benefit them more despite the outcome ton the majority. Self-interest is the primary concern before the interest of other people under utilitarianism (Dougherty, 527-37). On the other hand, deontology is based on the rule or rules that guide the actions of an individual. However, despite morality based on rules, the element of happiness is not considered and hence no benefit to an individual (Dougherty, 527-37). It is more concerned with the actions of an individual rather than the consequences of those actions. An action can be considered as ethically wrong based on the rule despite having greater benefit to an individual and the society at large (Dougherty, 527-37). This is completely ion contrast to utilitarianism which is based on the consequences. Therefore, from the comparison of the three ethical theories, I would stand by utilitarianism since it looks after the interest of everyone, that is, the individual and the society at large.

Measurement Theory And The Foundations Of Utilitarianism. (2015, Nov 03). Retrieved from https://studymoose.com/utilitarianism-3-essay 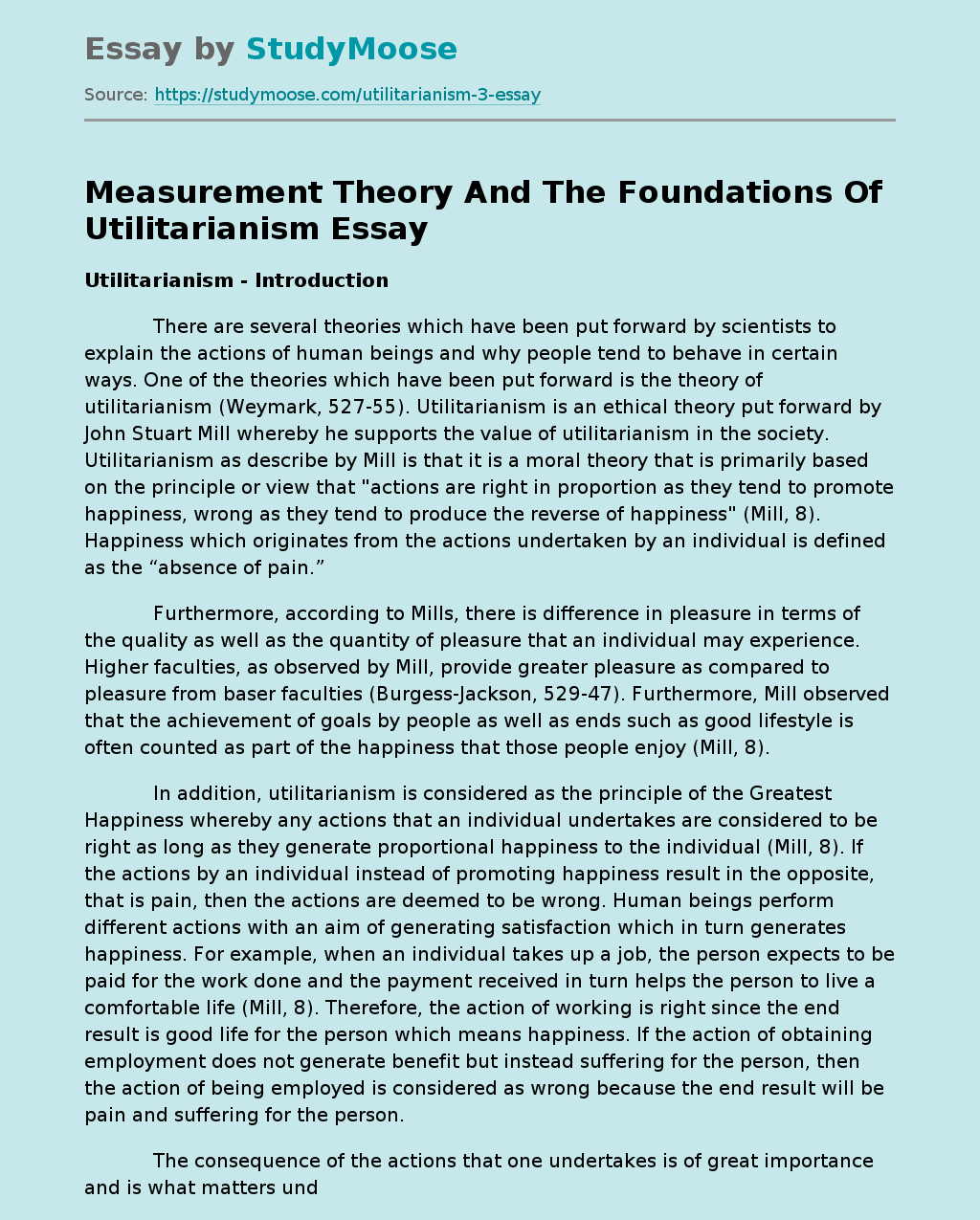