VISIT TO UST MUSEUM Date of Submission: December 14, 2011 As a Thomasian, it is just appropriate to visit the UST Museum where it showcases its rich collection of artifacts and important figures that defines our history. Here’s an historical background of the museum. The UST Museum is the oldest museum in the Philippines featuring a rich natural history collection, with a diorama of selected Philippine fauna. Other exhibits include the ethnography collection (cultural artifacts), the oriental arts collection (ceramic), and the hall of Philippine religious images.

Don't use plagiarized sources. Get your custom essay on
“ Ust Museum Visit ”
Get custom paper
NEW! smart matching with writer

Started as a Gabinete de Fisica, an observation room of mineral, botany and biology collections in the 17th century. Under the old Spanish educational law the collections were used as classroom materials for the courses in science especially in Medicine and Pharmacy. Fr. Ramon Martinez, O. P. , a professor of Natural History, founded the UST Museum of Arts and Sciences in 1871. However, it was Fr. Casto de Elera, O. P. , who started to systematically gather and catalogue all the collections, some of which date back to 1682.

Considered the oldest school-based museum in the Philippines, the UST Museum became a repository of scientific and artistic articles and objets d’art. Starting in 1941, it acquired the works of Filipino masters such as Fernando and Pablo Amorsolo, Carlos Francisco, Vicente Manansala, and Galo Ocampo. The Museum has permanent displays for specimens of Natural History; Ethnographic materials; Oriental Arts objects; Philippine Religious images; Paintings; and Coins, Medals, and Memorabilia. The painting collection includes works from the 17th to the 20th century.

As you enter the Museum, you’ll find on the ground floor is the Natural History section, a collection of preserved animals used for Gabinete de Fisica, originally. The collection consists of different species of different animals from birds, mammals, wild animals, reptiles, marsupials, aquatic animals, domesticated animals and animals that can only be found in the country like the pilandok, tamaraw. The section on Natural History is the most popular among the visitors to the Museum, especially to the students.

The bigger animals serve as great attraction both for children and grown –ups who marvel at the collection consisting of snakes, two-headed carabao, crocodiles, tamarraw and the long snake. The section’s highlight is the diorama of Philippine wildlife, containing stuffed specimens of animals indigenous to the Philippines ,which was preserved for years. Many of the University’s specimens are either endangered or already extinct, rendering the collection very valuable not only to naturalists and students, but to anyone interested in the natural treasures of this country.

On the second floor, it houses the Ethnography, Oriental Arts, Memorabilia, The Hall of Philippine Religious Images and the recently opened Hall of Visual Arts. The Ethnography section showcases different artifacts. The artifacts are arranged and classified according to the tribal divisions from Luzon to Mindanao. The collection features were grouped according to objective groupings: weaponry, kitchen wares, religious paraphernalia, personal decors, and musical instruments. Most interesting are the Ifugao arrows, deities and axes, and the various types of the most prominent Muslim weapon, the Kris and other pieces like the Sarimanok.

Other interesting artifacts, are all kinds of bamboo arms, with ingenious arrowheads, used by the Aetas from Nueva Ecija and Zambales. The collection also include household wares, implements, and basketry are also priceless artifacts. They give the observer an idea of peaceful times. They serve as reminders of daily chores and domesticity of our early people. Also, religious objects used for animistic rituals can be considered belonging to rare collections. The missionaries realized that they were cultural riches headed for extinction.

The feather headdresses worn by the priests of the Igorotes, bowls of the Ibalois, the necklaces, anklets, earrings, and other prices of jewelry constitute the native religious collections. Burial Jars are also seen in the collection were the early Filipinos put the remains of the dead to the jars or the “Manunggul”. The section also includes its additional artifacts like the gold burial mask from Batangas and a gold necklace. With these objects, it shows the extravagance the Filipinos have before the arrival of the Spaniards, since at that time, gold is bountiful that it is a common necessity at that time.

The permanent numismatic display in the Museum Hall contains a sample of coins with significant cultural value. The Coins, Medals and Memorabilia collection also features not our own pre-historic ones but also from different parts of the world like The Holy Land, Persia and Rome. The coin collection of the UST Museum is the product of a long-sustained interest in historical and cultural research. Some coins of the collection were considered meritorious and rare that the University earn ed outstanding awards, and certifications in the field of research.

The medal collection in the UST Museum is a modest one, and may be informative in tracing memorable events in Philippine history and the life of the University, as it is given prominence in the display. In its history of almost four hundred years, the University has lived through many vicissitudes. Through its classrooms have passed prominent men and women who have shaped the face of the nation including saints, presidents, heroes and soldiers. The medals also includes papal medals that also adorned the collection.

Other memorabilia are also in display like the first printing press in the country that was introduced by the Dominicans during the Spanish regime. Ceremonial paraphernalia are also displayed like the ceremonial maces that are still used until today for Graduation Rites. One of the most important memorabilia in display the seat of Blessed John Paul II that he seated during the World Youth Day in 1995. It is now considered as a Relic due to his recent beatification last April 2011. The Oriental collection showcases artifacts that came from China. These artifacts proved the trade relations to the Chinese to the Philippines over 600 or more years ago. The ceramic collection of the UST Museum is comprised mainly of Chinese wares and a display of many glaze types. Chinese trade ceramics dating from the 9th century AD have been found at early Philippine sites in Butuan, N. E. Mindanao, and Samar Island. By the 14th century Chinese trade wares were abundant while ceramics from Vietnam and Thailand began arriving in the Philippines. Storage jars are also seen in this collection. These are prized items and heirloom jars handed down by parent to child over many generations.

Their size, shape, and design usually determine the use of jars. The Hall of Philippine Religious Images is one of the highlights of the museum visit. As this collection of artwork was originally meant for pious purposes, rather than aesthetic, no trace of the identification of the craftman was found on the work. The Hall contains different antique religious images that were carved hundreds of years ago. The images were arranged according to images of Christ, the Blessed Mother and the saints. One of the highlights of the collection is the Crucifix in the center of the hall.

The Crucifix is the largest and the finest one in the country which is inspired by El Greco’s paintings. The cavities of the cross would have been included inside the crucifix. The whole collection of what began as religious works belongs to a unique form of art that shows not only artistic and technical skill, but more so, the enthusiasm and spirit with which the Christian Faith was accepted by the Filipinos. Recently, The UST Museum opened its new section, the Hall of Visual Arts which contains rare paintings from renowned Filipino painters that are now fully restored after years of scientific restoration.

The section consists of 41 restored paintings from Carlos “Botong” Francisco, Felix Resurreccion Hidalgo, Juan Luna, Victorio Edades and others who contributed their works to the Filipino arts. For want of needed space, there is no art gallery, strictly speaking, within the UST Museum. The unusually large pieces and a considerable number of portraits are hung along the walls, while the rest of the collection is stored in cabinets especially constructed for their security and protection. However, the Museum holds regular exhibits throughout the year to make these works available for everyone to see.

Despite the existing limitations, the art collection of the UST Museum is a rich cultural legacy and has provided valuable artistic testimony to the development of painting in the Philippines. A visit to the oldest museum inside the oldest University in Philippines is a remarkable and an important experience. While looking at every bits and pieces of the museum, the museum provides a visitor a glimpse of our historical heritage that made our nation. In my visit, I realized how rich our heritage with all the beauty that our fellow Filipinos posses in terms of knowledge and art.

Also, the visit was quite interesting because here, you’ll learn things that most people never realize how colorful our culture is. It’s just disappointing that most of the students didn’t actually appreciate what knowledge they can absorb with is vast collection that can help them know themselves a Filipino. In conclusion, I think the museum should be livelier to the students so that not only the student can have comfort, but also the knowledge that they need as a citizen of this country. 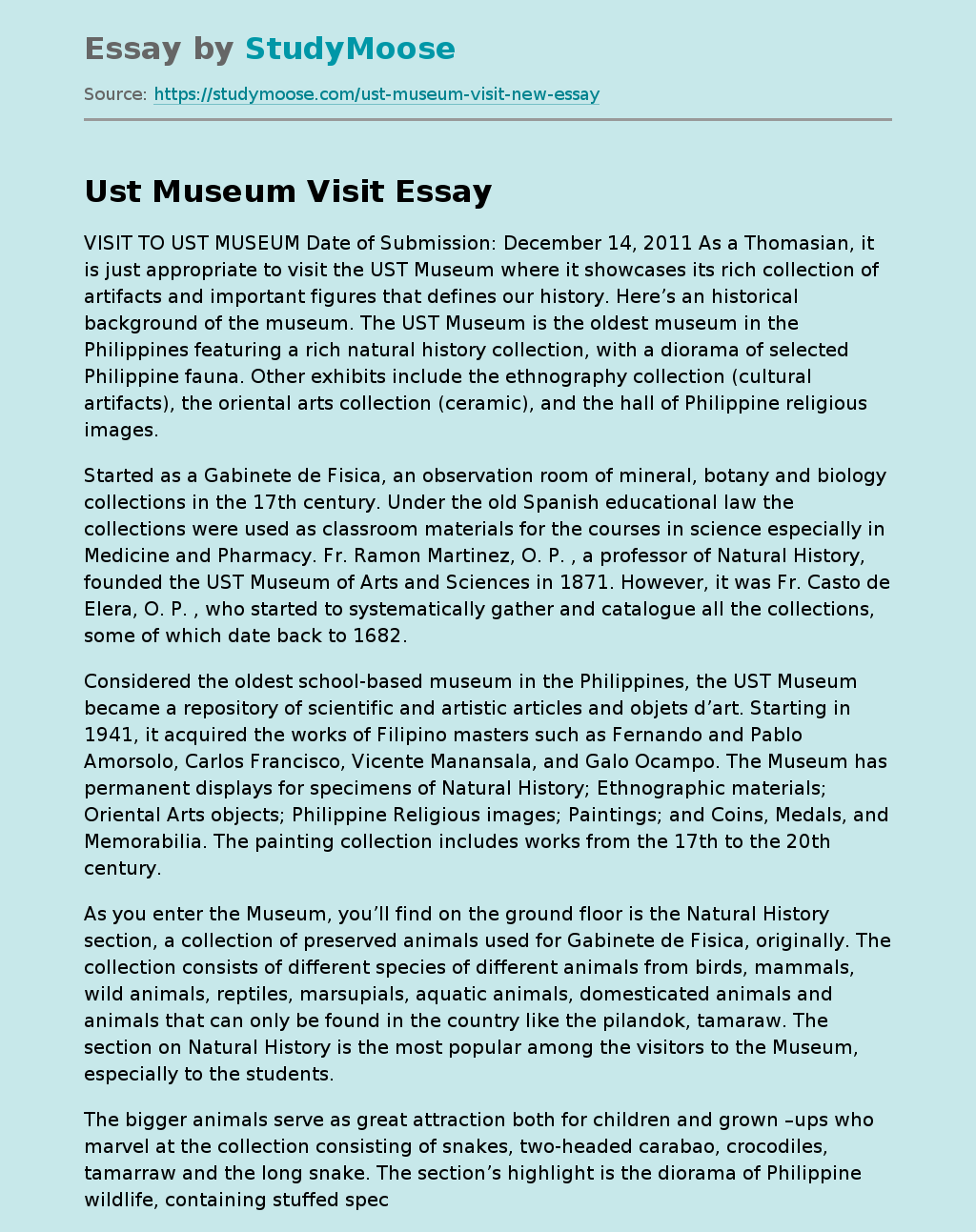