* Before 1860 Mexico’s population grew at a very slow rate but after getting rid of the large religious and civil land holdings by the reform laws of 1859, it increased to 13 million in 1900.

* The increase in Mexico’s population has caused a high concentration of people in urban areas.

* Before 1910 there was little internal migration in Mexico due to the hacienda system which kept workers bound to the farm on which they were employed.

Don't use plagiarized sources. Get your custom essay on
“ Urban Settlement in an LEDC where Urbansiation has caused environmental problems – Mexico City, Mexico ”
Get custom paper
NEW! smart matching with writer

* After the Revolution in 1910 more people were allowed to move around the city.

* Many people migrated to the cities and towns causing a high increases in urban population.

* From 1930 there was a large increase in urban population in all Mexican states. Although this increase was due to migrations many of which were young migrants and urban population rose further due to natural increase.

* Over the same time the rural population only increased by one third from 17 million to 23 million.

* However the population growth rate had fallen to 2 per cent per annum in the 1990s and the movement of people has slowed into the cities, and out migration from the city is now occurring.

* Most of the migrants have come from the central and southern regions of the country making journey of 150km.

* Many of the new arrivals wanted land on which to build homes and since the land was scare in the Federal District they turned to the surrounding area, particularly to the north of the Federal District, which his rapidly growing and industrialised.

* Isidro Fabela and Jardines have no formal rubbish collection

The Environmental Problems of Mexico City:

* Mexico City suffers from most of the environmental problems most rapidly growing urban area in developing countries suffer from.

* The Valle de Mexico has lost 99% of its lakes, 75% of its woodlands and 71% of its rural land because of urbanisation.

* It is estimated that 44% of housing in Mexico City is overcrowded with over 6.3 people per household, of which many lack basic services such as water, sewerage and electricity.

* In 1993 one third of secondary school pupils in the industrialised northern sector showed a 7.2% reduction in lung capacity.

* Mexico City’s air pollution is made worse by the temperature, where cold air sinks down from the mountains trapping pollutants down at ground level. Dust from the former Lake Texacco to the east and from the huge volumes of waste matter dumped on open sites is blown over the city affecting the south east and north east.

* Mexico City uses about 60m3 of water per second. The groundwater supply is based on the Mexico City aquifer, but this source is close to crisis and about one third of the city’s water now has to be pumped in at great cost from outside the area. Long distance pumping is not only expensive but there can be leakage in the pipes causing you to lose water.

* There is also a concentration of industries in the area which produce waste as so causing a problem of disposing hazardous waste.

* Mexico City produces about 40% of the country’s hazardous waste.

* About 90% of this is released into the sewage system and the main aquifer is being polluted – the water supply is being contaminated at the source. There are serious health problems due to the poor quality of water such as diarrhoea, cholera and diseases due to the exposure to toxic waste.

* Only 25% of it is collected which is placed in legal landfill sites at the city’s edges. Some landfills have been closed and now they have to find new landfill of adequate size.

* If found sanitary standards will be higher and will help to reduce the impact of uncovered and untreated solid waste on air and water pollution. Sending the waste to Monterrey is both costly and risky.

* One of the most notorious illegal dumping landfills is Rincon Verde in the hill west of Mexico City, where many types of waste are disposed causing lung, intestinal and skin diseases. There are frequent underground fires and rainwater leaks chemical pollution into the water table.

* Air Pollution Strategies: This is a serious problem in Mexico City during the last 20 years.

* Pollutants, which originate from unburned liquefied petroleum gas used for cooking and heating is trapped in the high altitude basin.

* There have been numerous strategies to control Mexico City’s air but the carrying out of it ahs been limited:

* Increasing use of unleaded fuel and equipping cars with catalytic converters

* Restricting commuter traffic – intruded a ban on ‘no driving day’, where cars are not to be driven on one day of the week

* Ban on new industries that are regarded as potentially polluting

* Relocation of 200 foundries and steel mills 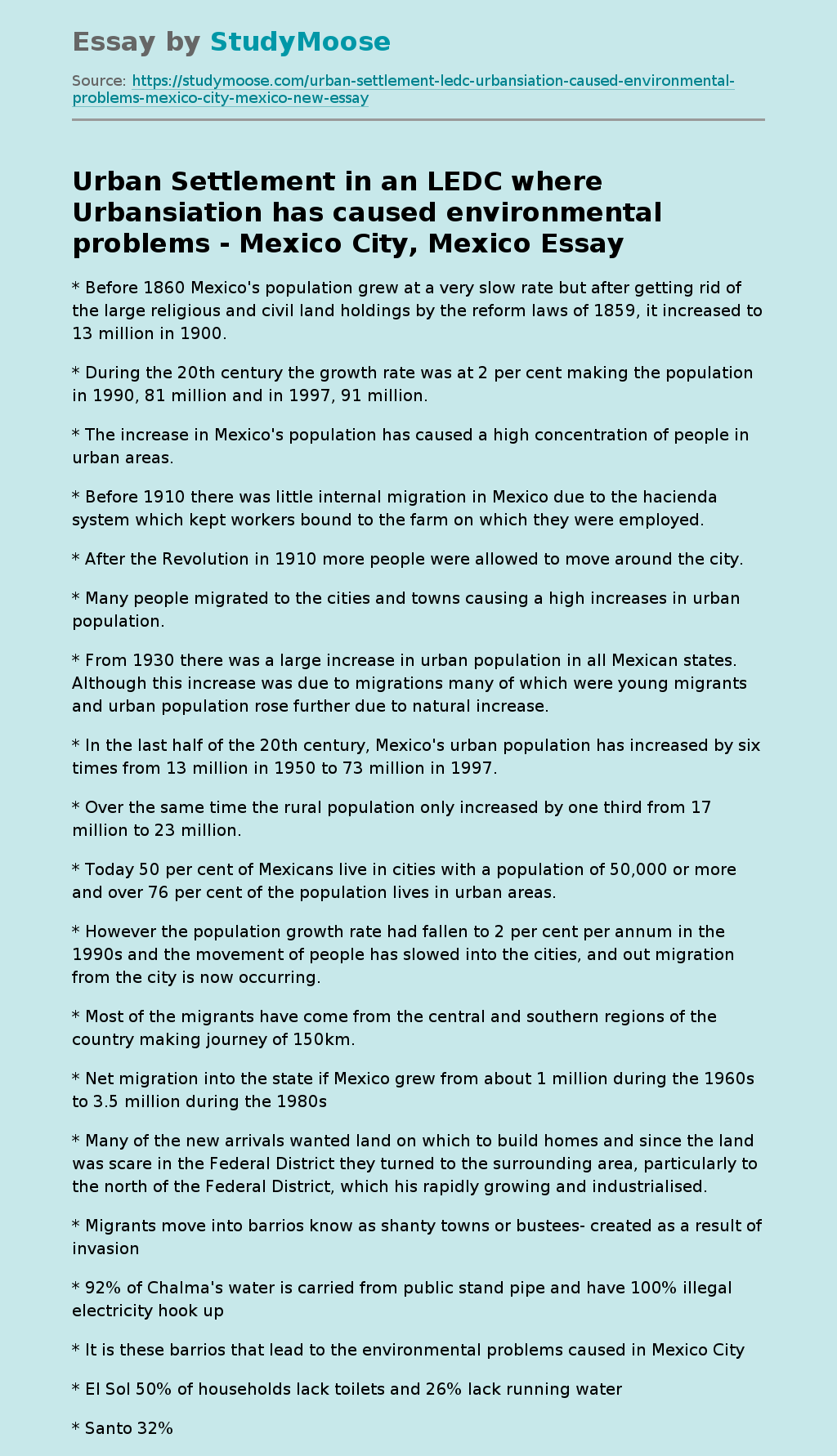