'Upon Westminister Bridge' by William Wordsworth

In this essay I am going to compare and contrast the poems ‘Upon Westminister Bridge’ by William Wordsworth, and ‘London’ by William Blake. I am also going to explain which one is the more effective and why.

Don't use plagiarized sources. Get your custom essay on
“ ‘Upon Westminister Bridge’ by William Wordsworth ”
Get custom paper
NEW! smart matching with writer

His mother died when he was 8 years old and his father died when he was 13 years old. William attended the grammar school in Hawkstead from 1779 until 1787. During these years he made many visits to the country side, gaining inspiration as the powers of nature exercised their influence. In 1802 William married his childhood companion, Mary Hutchinson. In 1850 William caught a cold on a country walk, and he died on the 23rd April, St. Georges Day.

He and Mary, who died 9 years later, have simple tombstones in the churchyard of St Oswald’s church in Grasmere.

William Wordsworth’s own opinion of how London was in 1802

The poem is based in London and is also based on a bridge somewhere in the city of London. This poem is William Wordsworth’s own opinion of how London was in 1802. The poem seems as if it is set in the morning because it says ‘all bright and glittery in the smokeless air’, this shows that nobody is awake yet and there is nothing lit such as fires.

We know there is nothing lit as well because ‘smokeless’ suggests there is not smoke in the air. This poem was written before the industrial revolution. We know this because it has the date of when it was written at the top. This shows that William Wordsworth knew London was going to change and that it wasn’t going to be the same anymore. This was written in what was to be, the romantic period. Romantic poets used their imaginations and intuition to see how the world is going to change. In this case William uses his imagination and intuition to see what London is going to be like after the industrial revolution. The poet is very passionate about London and shows that he loves London by saying ‘earth has not anything to show more fair’. This is a positive feeling by the poet. The poem as a whole is full of hyperbole because everything he says is exaggerated. Such as ‘Earth has not anything to show more fair’. He exaggerates about this because there are better places than London but that is what William Wordsworth thinks about London.

The language of the poem

The poem is written as a sonnet which doesn’t just show love but it shows the poets love for London. The average number of syllables in each line is 10 and this is called Iambic Pentametre. William uses this because it suggests that he doesn’t want anything to change in London, this shows that regular rhythm of the poem and how nothing changes. The poem is very peaceful and calm. Evidence for this is ‘never did sun more beautifully steep’. This shows that London was a beautiful place, very calm, and a lot of country side and not many industrial buildings around before the industrial revolution. This poem split up into 2 parts, an octet and a sestet. The octet is 8 lines long and the sestet is 6 lines long. The octet is all about sight. William Wordsworth writes about what he can see in the morning when he stands on Westminister Bridge. ‘The beauty of the morning’ is evidence for this. It is written in the 3rd person and is also in the present tense. This shows that it was happening as he was writing the poem. This also helps the reader to visualise what is happening and to understand the poem more. The rhyme pattern for the octet is ABABABAB. The sestet is about how the poet feels. Evidence for this is ‘Ne’er saw I, never felt, a calm so deep’. It is in the 1st person and is partially in the past tense. The rhyme pattern for the sestet is CDCDCD.

The mood of the poem

The mood of the poem is very positive. ‘Beauty of the morning’ shows happiness in the poem. He is happy that the morning is beautiful and not like London is today. Passion is another mood that is used in the poem. ‘Never felt s calm so deep’ is a quote that shows he is passionate about London and its views. The poet is very thankful, I know this because he uses the word’ God’. The word ‘God’ shows that it is all beautiful and peaceful, and he thanks god for creating it.

The poet has used some statements in this poem that are his own opinions and he has made them into facts. Evidence for this is ‘Earth has not anything to show more fair’. The effect of this is that the reader can understand what he is saying better than if he said ‘I think’. The writer has used a colon at the end of some lines so he elaborates on his statements. He dose this so he has proof of why his statement is true. The word ‘City’ is used but is not just a word, it as a meaning, this is because there is a capital ‘C’ at the

'Upon Westminister Bridge' by William Wordsworth. (2020, Jun 02). Retrieved from https://studymoose.com/upon-westminister-bridge-new-essay 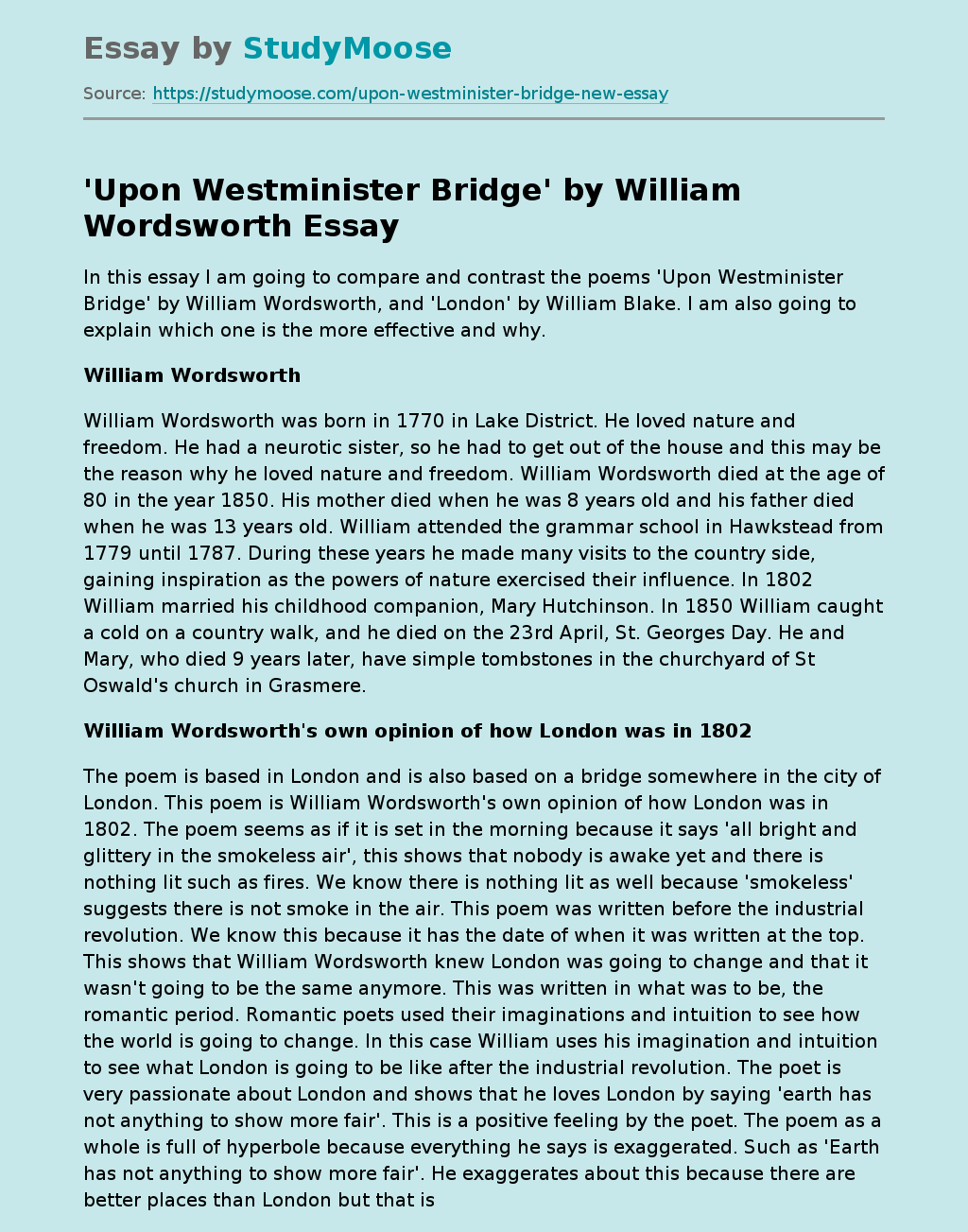