As I roamed around the campus and interviewed people, asking questions with regard to automobiles, I realized that people from UP Baguio perceive things differently and diversely. Of all the answers that I gathered from different sectors of UP Baguio, from the students, faculties and even staffs this statement was the most strucking for me. One of our sanitary janitors told me ” Alam mo, ang tao nahahati lang naman yan sa dalawa e. Yung mga taong meron at yung mga taong wala- yung mga taong may kotse at yung mga taong wala nito.

Don't use plagiarized sources. Get your custom essay on
“ UPB community – Automobiles: Symbol of Status ”
Get custom paper
NEW! smart matching with writer

At kung tatanungin mo ako kung importante ang pagkakaroon ng lugan (kotse), ang sagot ko ay oo, dahil kung may kotse ka ibig sabihin nun angat ka at nakalampas ka na sa pagiging mahirap. ” Overview: Cars as status symbol before and now. From earliest times, people have felt a need to set themselves apart from others in the society in which they live. As Weber would put, it is status that sets as from others and thus it is through evaluation of other people where we can find our place in the society.

By this, often this competitive desire takes the shape of acquiring material items to symbolize one’s uniqueness. These “status symbols” can come in many shapes and sizes. This paper primarily would talk about automobiles (particularly cars) as a mark of distinction and as a status symbol. Since cars have long been another common status symbol. Since the beginning of the twentieth century, the automobile has been one of the most powerful and pervasive status symbols (Brown, 1998).

Can cars be considered as a status symbol in the UPB community? 2. ) How does one define and associate cars into ones status? Randomly, I interviewed different people in the academe; it may be a student, teachers and staffs. I decided not to limit myself into just one sector of the university for this can result to hasty generalizations. I have interviewed them in a manner by which I can get their idea with regard to their view of considering cars as status symbol and how it is reflective with their classes in the society.

En masse the students, teachers and staffs of UPB community considered cars as a status symbol. Surprisingly, the general idea behind cars as status symbol comes from varied point of views of all the individuals within the different academe of the UPB community. Generally, having an automobile is a symbol of one’s success in the UPB community. More definitively, it is a two way perception of owning a car. The intention of the consumer owning a car, to show a distinction and power, and the counteraction of the community involved of one individual owning a car.

During the interview, there are different views and perspectives with regard on the association of a car into his/ her status. Generally, the data I gathered boils down into one answer. Their answer “it depends on what car. ” In a nutshell the people I’ve talked to considerer the model of the car in defining their status. One would say that ” e kung ang kotse ko e ung mga parang fx lang na mga taxi… instead na iangat nya ako, pinapababa niya ang status ko. ” Through this statement instead of a car being a status symbol for those who have, it became a status symbol for the have-nots.

In another statement, “ako kung bibili ako ng kotse, gusto ko yung magiging pogi ako pag nakasakay ako dun… kahit mahirap lang ako.. igagapang kong magkaroon ng magarang sasakyan. ” This assertion is a manifestation of spending of money for and the acquiring of luxury goods and services to publicly display economic power thus a conspicuous consumer for that matter. In today’s car market, the options of status cars are seemingly endless. The choices are vast, going from a foreign sports car to an American SUV.

The SUV has been described as “the most ostentatious popular product of car culture” (Morewood,2007). The size of the SUV alone makes it a very visible status symbol. Through this, there are many ways to associate cars into ones status. It may depend on the car’, its brand, performance and its seating capacity too. The lesser the passenger, the more classy your car is. With regard to class, according to the simple interviews it came out the even those people who perceived themselves as lower class find it needy to have a car, not because they want it for display but rather for its function for transport.

As to the middle class, as we can see there are different tact on how they view a car, some want it for public display, some find it as something that accentuates their physical aspect or “pampapogi. ” As put forward by Sernau (2011: 103) citing Weber (n. d), we can speak of class when 1. ) a number of people have in common a specific causal component of their life chances, insofar as, (2) this component is represented exclusively by economic interests in the possession of goods and opportunities for income and (3) is represented under the conditions of the commodity or labor markets.

In conclusion, as seen in this simple study, there are many different ways on how a car can be presented by different people and this is not only through the economic aspect but also on the power play of the individuals of those who owns and at the same time the one who view it. Divisions based on these status may depend on his/ her opportunities and life chances and how it is depicted by the society. In this relation, using cars as something that marks distinction through its model, brand, effect on people, prestige etc can be reflective on how people will evaluate us in terms of set of ideals and values. 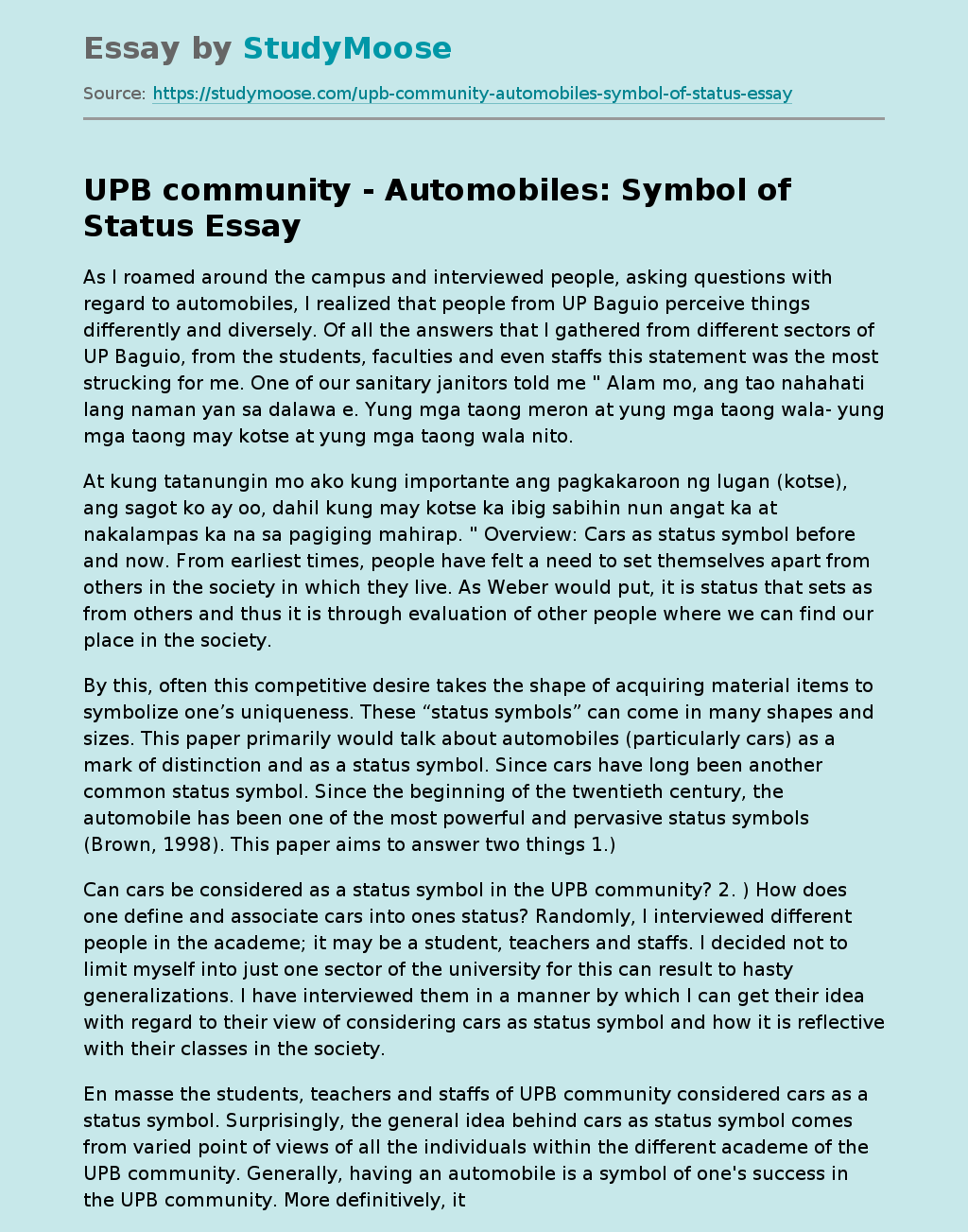