He arrives just after Birling has been setting out his views of life: that every man must only look out for himself. The Inspector’s role is to show that this is not the case. Throughout the play he demonstrates how people are responsible for how they affect the lives of others; his views are summed up in his visionary and dramatic final speech: that ‘we are members of one body. We are responsible for each other’. Responsibility is one of the play’s two key themes, and the Inspector is Priestley’s vehicle for putting across his own views of this as a socialist.

Don't use plagiarized sources. Get your custom essay on
“ Unsympathetic a character ”
Get custom paper
NEW! smart matching with writer

In this final speech, he is speaking as much to the audience as to the characters on stage. His words here are a warning to an audience in 1945 not to repeat the selfish mistakes that led to the ‘fire and blood and anguish’ of two world wars and the years between them. The Inspector is the catalyst for the events of the play: without him, none of the characters’ secrets would ever have come into the open, for a variety of reasons.

For Birling could not see that he did anything memorable or wrong in sacking a troublemaker; Sheila thought her rather spiteful jealousy of a pretty shop-assistant was not ‘anything very terrible at the time’ (p.24);

Gerald needed to conceal his involvement with the girl from a jealous fianci?? e; Mrs Birling is too cold ever to ‘have known what [the girl] was feeling’ and her effect seems lost on her; and Eric had resorted to theft, which he too needed to conceal.

Without the inspector’s ‘purposefulness’, each character could not or would not have acknowledged their behaviour. The inspector’s sombre appearance and the news he brings are a contrast with the happy and elegant air of celebration on stage.

His name, Goole (ghoul?), Gives him a mysterious, disturbing quality – a ghoul is a spirit which takes fresh life from corpses, and we could certainly argue that the Inspector’s existence is a result of the girl’s death. If he is not a real inspector, what is he? A clever impostor (but nonetheless human)? The personification of the social conscience the characters all lack or suppress? A supernatural, god-like being (for he certainly seems to know what each character has done, without being told)? The reproachful spirit of the girl’s dead child?

Despite the importance in the local community of people like Gerald and the Birlings, he controls the development of events: who will speak and when; who may or may not leave; who will or will not see the photograph. He even seems to control what people say. Sheila tells Gerald: ‘somehow he makes you’. But he does not control their reactions – he only uses his information about the girl’s life and character, her diary and a letter, her photograph, and constant reminders of the horrific death she has suffered, to create the possibility for others to face up to what they have done.

They must decide whether to change or not – Sheila and Eric do; the Birlings and perhaps Gerald do not. The Inspector has a moral dimension that makes him different from an ordinary policeman: he is more concerned with right and wrong than with what is legal. He sternly tells Birling, for example, that ‘it’s better to ask for the earth [as a worker might do] than to take it [which Birling does]’. But he also tells the characters that ‘if you’re easy with me, I’m easy with you’ – he has compassion for those who are willing to accept their responsibility, but nothing so simple as forgiveness. After all, ‘the girl’s [still] dead though’. 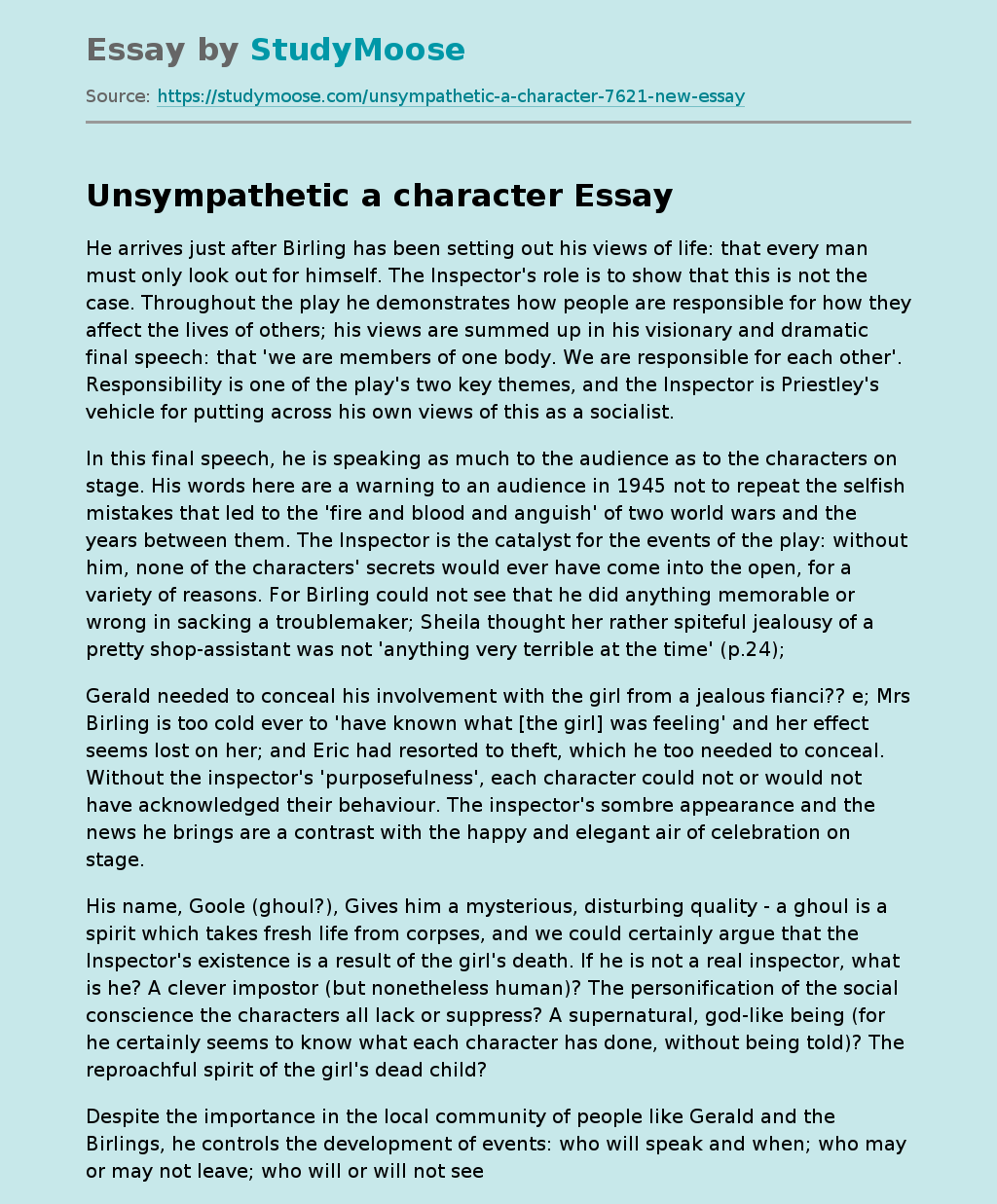