1. Does Universal Circuit’s Irish controller have a convincing argument for the weakness of the dollar? Why or why not? How do you interpret the evidence? The Irish controller certainly presented a very convincing argument. He argues that since the American trade deficit has been growing, the dollar will be likely to depreciate. From 1980 to 1984 the dollar appreciated against the punt by about 50% and interest rate averaged 12.6% during the same period. These high interest rates have caused the dollar to appreciate against other currencies and slowed down the high inflation rate (10% in 1981) during that same period of time.

Don't use plagiarized sources.
Get Your Custom Essay on Universal Circuits Just from $13,9/Page

Irish controller’s main worry was that the dollar will be likely to depreciate. Over the last 2 years inflation has fallen to 5%, much lower than the 10% rate in 1981. A lower inflation rate could result in the US government lowering interest rates, which could cause the US dollar to decline. Increasing trading deficit, lower inflation, and lower interest rate signals a possible weakening dollar On the other there is a more optimistic view on the direction of the dollar.

Despite the US worsening balance on current account, the US dollar will likely to appreciate in both nominal and real terms due to foreign capital inflows motivated by good performances in equity and real estate markets, high real interest rate, and long-run prospects for growth and profitability. In other words, despite its large trade deficit, the US is still seen as a safe and profitable market to invest. The point of the CFO of universal circuits is that no one really knows in which direction the dollar will go and therefore speculating on this issue was of no real interest to those in the manufacturing business. 2. In view of the fact that the dollar is the Irish subsidiary’s functional currency, should the controller be worried about its exchange value? What is the nature of the foreign exchange exposures(s) faced by the Irish subsidiary?

Why isn’t the Irish subsidiary’s functional currency the Irish punt? Despite management’s perspective on speculation at the manufacturing business level, the Irish controller’s concerns deserve closer attention. The dollar and not the punt is the functional currency because all sales and a portion of the costs of the Irish subsidiary are denominated in dollar. The nature of the FX exposure that the subsidiary is exposed to is an operating exposure. This exposure again deserve a closer attention for the following reasons: 1) There is a mismatch between cash inflows and outflows, i.e. all sales are invoiced in dollars while a large portion of expenses are in the Irish punt 2) Principal competitors are located and supplied out of the US using the dollar 3) Transfer prices of the subsidiary are based on the US dollar price list

Given the table above, 66% of the subsidiary profit is exposed to FX change. If the dollar depreciate then the impact on this profit will be significant. This situation is even worst given the fact that 51% of the costs the operation must be paid in the stronger currency (punt). Would you approve the controller’s request to buy the punt forward? What considerations factor into your decision? There is no ……that the Irish subsidiary economic exposure needs to be hedged. However, the fact that the controller should perform it is somewhat debatable. There are three things that I will consider in making this decision: * Does he have the expertise to do so

* Is there an active market for a punt forward? What is the time horizon available? * What are other cost efficient alternatives

3. Considering Universal Circuits’ exposures worldwide, what general policy would you recommend concerning the handling of foreign exchange exposures? Should all exposures be converted or just some? How much of a role, if any, should foreign operating managers play in exposure management? 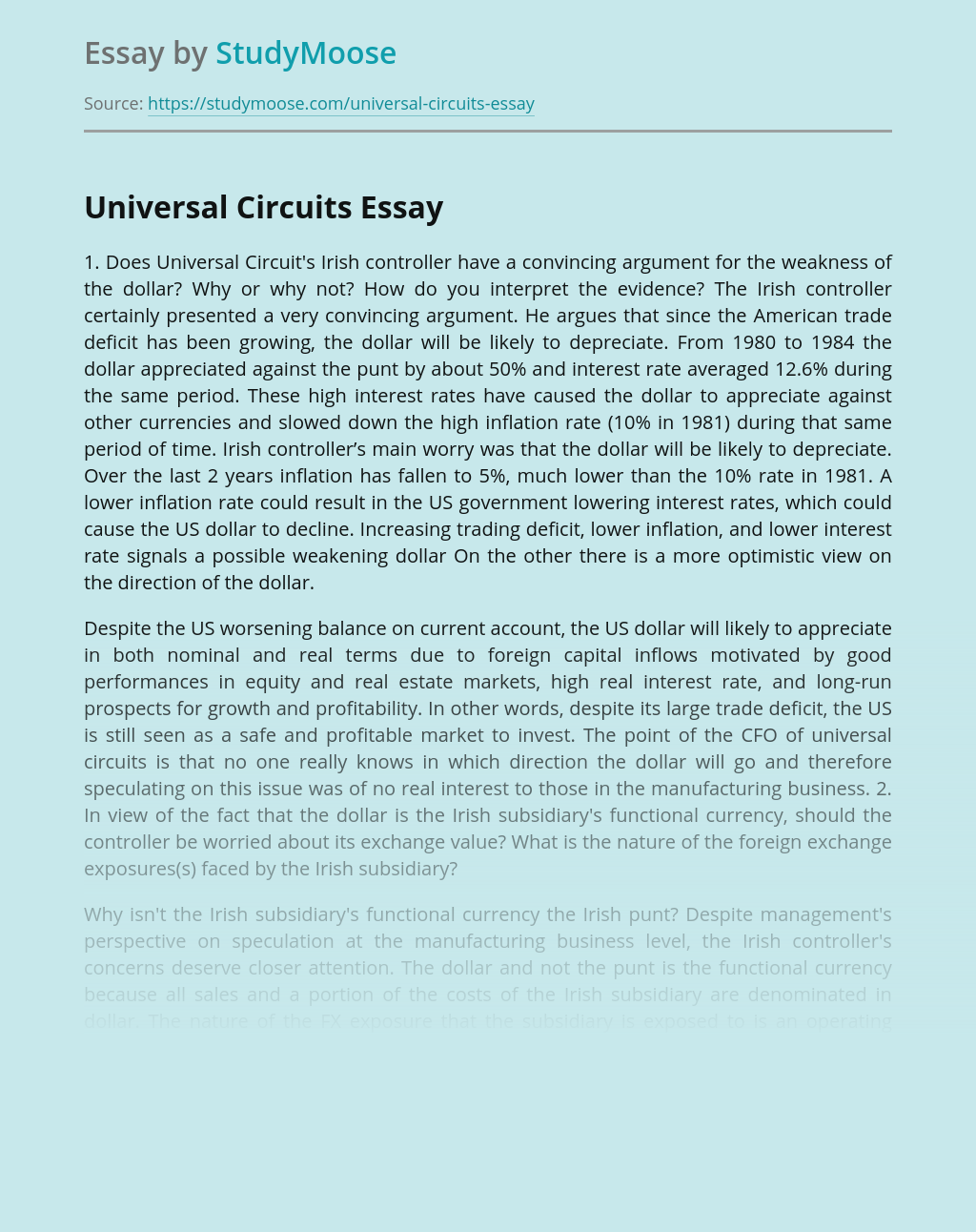 An affluent economy has the dynamics to identify their financial strength and prosperity by the principles they practice and execute. However, when a country becomes overly confident on their abilities to remain consistent as a global power they become vulnerable to complacency. A nation’s economic wealth becomes susceptible when they no longer recognize the potential...

To divert attention from increasingly severe political and economic problems, in 1982 the junta ordered an invasion of the nearby Falkland Islands, a British territory that Argentina had long claimed. British forces counterattacked and took back the islands. A huge debt was accrued as a result of the war and at the end of the...

1. Define economics and trace briefly its evolution. Discuss allocation, distribution, and movement of factors of production in the domestic and international economy. Economics is the social science that analyzes the production, distribution, and consumption of goods and services. The term economics comes from the Ancient Greek ????????? (oikonomia, “management of a household, administration”) from...