Muslim world, with almost a billon and a half population, and so many features of climate and geography, and natural and human resources, can establish a great and united society.  The pocket of Western colonialism is continuously getting filled from this region for over two hundred years; whether in the colonial era, the neo-colonial era, or in modern era, this zone has served the political goals of arrogant world, which America could be considered as the top leader of them.

If the Islamic nation obtains its unity, if Islamic power shows his true meaning, if actual independency in this area is realized, the economical and political and cultural dominance of the enemy will be stopped.

Enemies do not like this, and they are trying to prevent this phenomenon from happening with all their power. The trick that they have found is to make a schism and unfortunately this disease has penetrated inside the Islamic world body. I seriously ask you to consider this issue and think about it.

Islamic nation has passed hard periods and has seen many ups and downs in the history; and today it has reached to a decisive point. Today, if Islamic Ummah arranges an acceptable attempt, it can choose a way to revoke lags and problems and hardships and sufferings of the Islamic world. If the directive motion of officials and elites; and their decisions in the entire Muslim world, is delayed, even for one day, the Islamic Ummah will get wronged.

Today is the day of unifying the Islamic world.

You see the enemy investment to discompose the current poor unity .consider Iraq Also other Islamic regions deal more or less with the same conspiracies, they try to make schism between Islamic tribes, Islamic sects and Islamic nations by various excuses, to make people of one side kill the people of other side and vice versa, these people spite those people, and those people spite these people reciprocally, and the consequences is that they remain unaware of the real main enemy of the Muslim world and designers of domination over this area of the world.

Dear brothers and sisters! Today the Islamic world is in special situation. It can be said that for many centuries, Islamic world has had no opportunity the same or alike today. Today we have a great opportunity. Islamic nations have been awakened and this has been developed to the borders of Islamic world. Islamic nations have recognized their rights and many of Islamic leaders-though make pretence- are full of spite and enmity of arrogant world, and we see this.

In many Islamic countries, leaders and politicians are against America and arrogant powers behaviors. This is great opportunity for Islamic world and we should use it. Politicians have a duty. Religious and intellectual leaders also have a duty and this second duty is not less important than the first.

Now, Islamic Ummah is under various threats and disrespects. The heedless arrogance with leadership of America and with help of Zionist as a middlemen and warmonger regime, takes the most abuses from segmentation and dissociation of the Islamic nations.

•
Day of initiative action of Muslims

Today is the day that Islamic nations and governments can take the initiative actions and start a great task. Supporting the oppressed Palestinian nation, supporting the Iraqi people, safeguarding the stability and independency of Lebanon and Syria and other countries in this region; are public tasks and duties of the political and religious and cultural elites, national gentlemen, academics and youths are heavier than others . Unity and sympathy among followers of Islamic religions and avoiding sectarian and ethnic differences should be most prominent slogans of the elites. Scientific endeavor, political liveliness, cultural effort and mobilization of all forces in the main arenas should be on top of their efforts.

•
Islamic nations must be awake

Islamic nations should awake and they should not consider the enemy conspiracy as an insensible matter, and they should maintain their watchfulness. Today is the day of unity and sympathy of the Islamic nations and governments. Here, I would like to warn our nation, Iraqi nation, nation of Pakistan and other Muslim nations and ask them to suppress and restrain religious differences and conflicts between Shiite and Sunni. Today I see that there are plannings to making war between Shiite and Sunni.

Killings and explosions that occur in mosques, Hosainiehs, the congregational prayers and Friday prayers, indeed there is the evil hand of Zionism and arrogant regimes in them. It is not done by Muslims. Today, In Iraq, Iran, Afghanistan, Pakistan and also in all other countries, Muslims have a duty to pay attention to their own unity. (For all Muslims) Monotheism, God, prophecy, Resurrection, the Koran and Most of the provisions of Islamic Sharia are the same; all of these are common but enemy comes over and puts a finger on the dissociation points and makes the hearts full of hatred to one another. He does so to reach his goals. .

Our great Imam was emphasizing on the unity of all Muslims, because he saw this risk and recognized it. In our country and other Muslim countries, British and its intelligence agencies make dissociation between Shiite and Sunni. They have extensive experience in this work; all must be careful. Today Zionist assistances also interfere in these actions. Our information show that the evil hands of Zionists and enemies of Islam elements are interfering, directly or indirectly, in all events around the Muslim world.

• The Duties of political and cultural officials

The tasks of political authorities are heavy. The cultural officials, writers and scholars should avoid from divisive discussions; the Sunni and Shiite must all emphasize on this alliance point and this expectation remains existent that scholars and political elites understand the current risks, understand the importance of unity of Muslims and understand the plotting of enemies to break the unity and empathy. •

•
The unity of Muslims is an actual need of today

Dear Brothers; dear sisters! Today, unity for Muslims is an actual need. • Unity in word is the key of victory of the Islamic Ummah In general, the key of victory of the Islamic Ummah is the word unity. If the Islamic nation wants to obtain development in fields of science and material, and dominate its destiny, and be released from alien dominations, and obtain of inner and outer prosperity, these can be obtained by having the word unity. Imperialistic centers are using every factor to consolidating its power over the world. They have tried to use everything to break down and divide the Islamic world, and unfortunately they have been succeeded sensibly.

If the Middle East countries today are directly be threatened by proudly screams of America, it is because of the difference in the word between Muslims. If Muslims want to be survived of this disgrace, and if they want to save Palestinians, and if they want to stop the enemy from bothering Muslims in Iraq and Afghanistan and other Islamic countries, the unity of word, unity of nations & governments and slogans is necessary. The day of Eid ul-Fitr is the day of unity.

•
Holding the rope of Allah is the duty of every Muslim.

•
The holy prophet (PBUH) is the unity point of Muslim world

Holy prophet and messenger, Mohammad (PBUH), is the most important point to create unity, And the Islamic world can be jointed with each other at this point and it’s a place is a place where the emotions of all the Muslims are concentrated there; here is center of love in the world of Islam. Now you see the writers who take money from the Zionist, to focus on this center and they are scorning it to eliminate the importance of insulting the Islamic Ummah gradually.

This is a main point; Politicians, academic and cultural elite, writers, poets and artists should focus on this point, all Muslims to get united on this point. They should not consider the disputed cases, not to accuse each other, not to excommunicate each other, not to dispossess each other from religion. The hearts of Muslims will be refreshed by remembering the holy Prophet and his love. All of us are his lovers.

• Meaning of Islamic unity is not to struggle

Meaning of Islamic unity is not to unify the different religions and beliefs of Islam. Discussions about religions, beliefs and theological opinions should be done in the scientific, juridical field, and having different juridical opinions could have no effect on the Life and political realities. Our meaning of the unity of the Muslim world is not to make conflict, (do not conflict because you will be weaken).

•
Excommunicating the idolatrous is a need

• The nature of arrogance

Today, all advertising organizations related to arrogance and colonialism and their assistants have cooperated with each other to break the unity of the Islamic Ummah in this Islamic region by advertisement.

Islamic scholars must be careful. You must be careful of these inventive and false religions that are violating the unity. Be careful of petro-dollars that are used to create division. These filthy hands try to break the unity of Muslims. You should encounter them. This requires interest of unity and following the path of Islamic unity. It is impossible without this.

In campaign among right side and wrong side and arrogant powers, Islam will be the main victor. Muslims unity and the formation of the Islamic Ummah are very dangerous and worrying for greedy arrogant powers. So today in addition to Britain, American and Zionist intelligence systems also try to prevent the unity of Muslims. Some other serious concerns of imperialistic powers are: the spread of Islam Jihad, Islam of independence, dignity and identity of Islam, and Islam against the domination of foreigners in Iran to different parts of Muslim world and; thus creating tension between Iran and other Islamic countries, is one of the serious goals of the Islam enemies.

Despite all these ads, Ideas of the Islamic Revolution of Iran have developed to all parts of the Muslim world, and common awakening, movement and Islamic identity among Muslims today, are not comparable with the last twenty years.

Against the Vitality and progress of Muslim world, America has got weaker than twenty years ago, and does not have former grandeur and power, while America and its followers now are involved in the vortexes that as time increases, they sink into these vortexes more and more, and a dangerous future is predicted for them. All these facts indicate that, according to Divine traditions, the wrong side that the America is at the head of it, will be defeated in current campaign between right side and false side without any doubt.

All Muslims should be responsible and with tireless efforts, continue to their political, cultural, social and advertising efforts and strengthen their alliance. Call of Ahlul Bait (PBUH) followers is the call of unity, dignity and spiritual and wise life. The true teachings of Islam, which is manifested in Ahlul Bait (PBUH) ideology, is in fact spirituality without isolation and spirituality with politics, mysticism, along with social activities, and supplication with jihad, and today the world needs such spiritualism.

One of the current important issues is to avoid mixing religion educations with superstition. Scholars and notables should prevent prevalence of superstitious issues by explaining the correct Ahlul Bait (PBUH) educations. 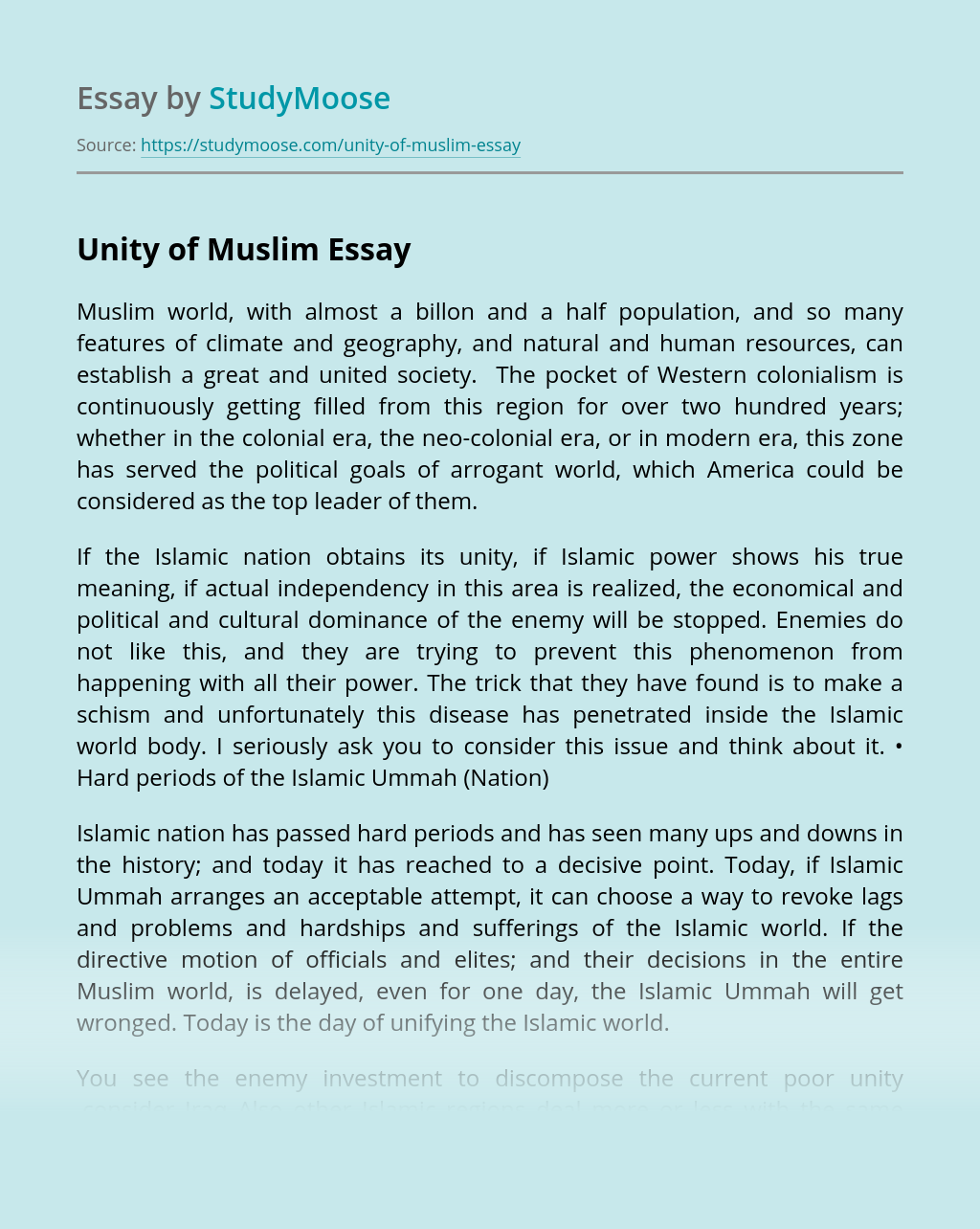