QUESTION: It has been argued that united states constitution came about primarily through an evolving series og meetings, conventions, and congresses. support, modify, or refute this contention using specific evidence. In Philadelphia, 1787 the united states constitution was drafted in a series of meetings and conventions. None of the delegates were interested in a meeting to talk about the weak A.O.C, but once they were lured to Philadelphia the delegates realized that they need something to replace it. In the meetings they discussed that the government wasn’t strong enough, they didn’t have a strong hold over taxtation and, they talked about the peoples’ individual rights.

Don't use plagiarized sources.
Get Your Custom Essay on United states constitution Just from $13,9/Page

While the delegates were in Philadelphia they discussed that the A.O.C wasn’t strong enough, which caused them to bring up incidents such as Shay’s rebellion. This rebellion particularly alarmed the government because they couldn’t control the people. They had no power at all over them. Daniel Shay showed the government that they couldn’t stop the people from committing crimes.

In one of the meetings the delegates, deliberated central government was unable to enforce its laws. Their solution was in one of the meetings was to create three branches legislative, executive, and judicial. The legislative branch would be made up of two houses; however, unlike our national government today, representation in both houses would be based upon a state’s population. This plan differed from the Articles of Confederation that gave each state one vote in Congress regardless of its population. At another convention, over the three month period, delegates conferred about congress’ denial of any powers of taxation: it could only request money from the states.

The states often failed to meet these requests in full, leaving both Congress and the Continental Army chronically short of money. The country was in major debt, but had no way to pay it off. As a resolution delegates came up with to pay the debts of the United States, and to provide for the common defense and general welfare of the United States. Taken together, these purposes have traditionally been held to imply and constitute federal government’s the taxing and spending power. Another problem fixed with the constitution because of the weak government (a.o.c) was individual rights,now stated in the constitution “all men created equal.” 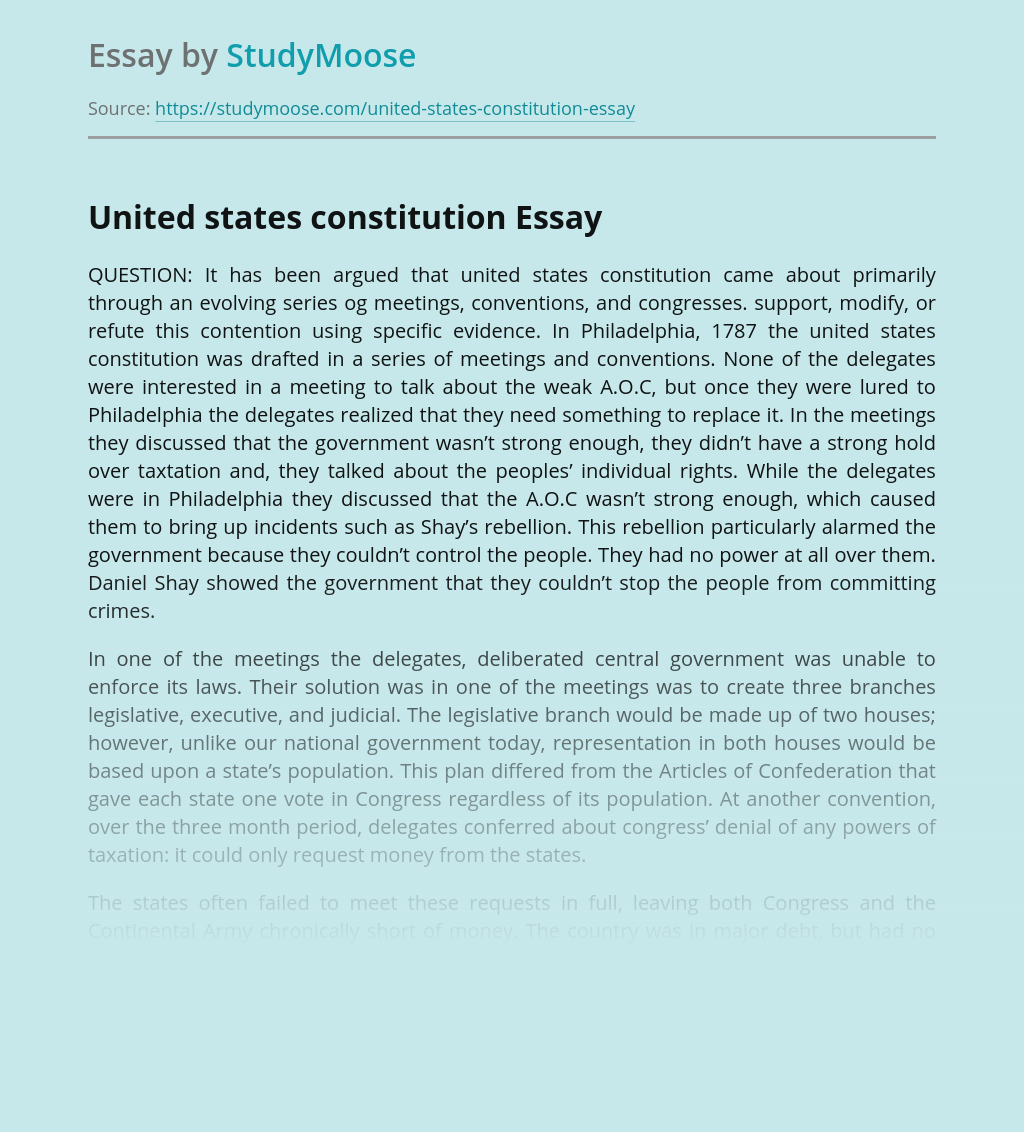 The Legislature and the Judiciary: Conflicts The article “The Courts and the legislature in India” by Phiroze K. Irani talks about the conflict between the Judiciary and the Legislature, the two of the three pillars of India. The problem between the two bodies dates back to the commencement of the constitution, within one and a... VIEW ESSAY

Thereby both countries had attained dominion status in which a number of smaller states had got affiliated forming a union with a strong central government that came to be called as Federal Government in the US and Central Government in India. Thus both states became Federal Republics. While framing the Indian constitution, its drafting committee... VIEW ESSAY

View sample
Get Essay
Equal protection and due process clauses

Beard thought that the constitution was just a document written by the rich, whose only motive was protecting their wealth and property. Beard said that these rich men included landholders, creditors, merchants, public bondholders, and wealthy lawyers. He was able to show that many of the men at the Constitutional Conventions fell into one of... VIEW ESSAY

In the past century, there has been a growing debate as to the motives of the founders of the republic and as a result the nature of our constitution. While Marxist analysts such as Charles Beard contended that the founders were wealthy elite that ultimately created a conservative document intended to weaken the poor popular... VIEW ESSAY