Unemployment in Developed and Developing Countries

Attaining a full employment level, where only a natural level of unemployment exists, is one important macroeconomic objective and they key to this attaining this objective is job creation. This report is a cross sectional econometric analysis of how different factors lead to the creation of jobs in countries with differing Gross National Income per capita. When speaking of job creation, one can expect that the impact and the significant importance of a factor, such as growth rate of the agriculture sector, would vary across developing and developed nations.

Don't use plagiarized sources. Get your custom essay on
“ Unemployment in Developed and Developing Countries ”
Get custom paper
NEW! smart matching with writer

In nations with high national income the agriculture sector is highly capital intensive and higher growth rates in production are achieved through improvements in crop yield. In such countries we can expect that there would not be a significant relationship between employment and growth of agriculture.

In this report we look at 5 such factors that may have a different impact on employment among countries of different income groups. Objective

The Dependent and Independent Variables

The dependent variable taken in this report, as a proxy for employment, is the employment to population ratio. Specifically we will be looking at how different factors lead to changes in the percentage of people employed (above 15 years of age) across different countries. When looking at factors of job creation we can think of 4 major sources: job creation by the agriculture sector, job creation by the manufacturing sector, job creation by the service sector and job creation by foreign direct investment. The first independent variable in this report is the annual growth rate of foreign direct investment. We can expect FDI to be largely important for job creation in countries with low national income, but not important in countries with high national income. The second independent variable taken is the annual growth rate of manufacturing, value added (based on constant local currency). Value added is the net output of the sector after adding up all outputs and subtracting intermediate inputs. It is calculated without making deductions for depreciation of fabricated assets or depletion and degradation of natural resources.

Also included are imputed bank service charges, import duties, and any statistical discrepancies noted by national compilers as well as discrepancies arising from rescaling. The fifth independent variable we have taken is the age dependency ratio, per 100 people of working population. Age dependency ratio is the ratio of dependents–people younger than 15 or older than 64–to the working-age population–those ages 15-64. We have taken this variable to account for changes in the employment to population ratio that may arise due to changes in population structure in a country.

In this report, we have identified how the factors affect employment among the countries of the different income groups. Firstly, we have run a regression with data of the 43 countries in the low income group to see which factors had a significant relationship with employment among low income countries. The residual terms were homoskedastic according to the white test. Therefore, we had used the White’s Heteroskedasticity consistent coefficient covariance option to run the regression. The d-stat was very close to 2 and therefore we did not face the problem of autocorrelation.

After accounting for heteroskedasticity, we tried a few functional form and finally chose a model based on the adjusted R-square and Schwarz criterion. The same was done for the high income group of 34 countries. After, looking at the separate regressions, we have run a regression including data from both groups which consisted of 34 countries from the low income group and 34 countries of the high income group, giving us a total of 68 observations. Then using interaction dummies we have shown how the factors have significantly different impact on employment between the two income groups.

Table 8 shows us the results of the regression of the low income group. As we can see the growth rate of FDI has a significant relationship with unemployment. The coefficient C(2) has a t-stat of 1.87 and is significant on a 5% significant level. Moreover, we have also identified that the employment to population ratio increase at an increasing rate due to increases in FDI among countries in the low income group. This shows an increase in FDI growth rate can bring about a more than proportional increase in the employment to population ratio. This is no surprise, as in countries with low national incomes FDI creates great multiplier effects. The employees that get hired by the foreign firms look for more ways of spending their increased income and thus they demand more goods and services. This creates more space for employment opportunities. Also as foreign firms set up in a location, many subsidiary firms also emerge to cater to the needs of the foreign firm in that location. Example- Foreign Tobacco Manufacturing firms create much more jobs indirectly for tobacco farmers and distributors than they do directly by hiring employees.

The growth rate of services directly leads to the creation of more jobs, in low income countries. Also we can see from that table that Agriculture does not have a significant relationship in job creation. Growth rates in agriculture are normally brought about by either an increase in land area or an increase in yield or productivity. Increases in land area would lead to more labor being hired in the agricultural sector, however increase in yield is not expected to have the same effect. Most countries have very low scope to increase land area allocated to agriculture as land is limited in supply. Therefore, the growth rate of agriculture in most countries (as in these low income countries) is brought about by increases in yield by better productive methods of farming, use of new technology, use of hybrid seeds and fertilizer, etc.

Table 9 shows the regression of the high income group of 34 countries. This regression is expected to exhibit multicolinearity, so the t-statistics are much lower than they should have been. Despite this we can draw many interesting conclusions from the data. Firstly, we can see that the FDI growth rate is not a significant factor in describing the employment to population ratio. The coefficient C(2) has a very low t-statistic. The reason being, high income countries do not rely greatly on external investment for job creation. Much of the jobs are created internally by its growing sectors. We also see from the table the growth rate of the manufacturing sector is highly significant in describing employment. The coefficient C(3) has a very high t-statistic and a p value of 0. From this we can understand that much of the employment is generated by the manufacturing sector in these countries. The table also shows that the growth rate of agriculture has a significantly negative relationship with employment (at a 10% significance level).

High income countries have a capital intensive agricultural sector. The farmers are capable of affording large investments on capital equipment and also they have access to new technologies. Therefore, much of the growth is generated by replacing labor with more productive capital equipment. Thus, there is negative relationship among the growth rate of the agriculture sector and the employment to population ratio. As we also see the growth rate of the service sector has been identified to be not significant in describing employment among high income countries. However, the t-stat is very close to the critical value of 1.64 (for a 10% significance level). We have also noted earlier, that this regression is subject to some degree of multicolinearity which gives makes the t-value much lower than it should be.

Table 10 shows the results of the regression using dummy variables for our combined group of 68 countries. Here a dummy of 0 is used for the low income group and a dummy of 1 is used for the high income group. Here our aim is to see which factors have a significantly different impact on explaining employment across these two groups. Firstly we look at the coefficient for the dummy variable for agriculture, C(7). The t-stat for the dummy variable is 2.32, which shows that the effect of the growth rate of agriculture has a significantly different impact on employment between low income and high income countries. A

Also, we have identified that in high income countries agriculture has a negative relationship with unemployment. As the national income in countries increases and they are capable of purchasing better technology, the employment opportunities in those nations largely shift from the agriculture sector to the manufacturing sector. We can also deduce from this that the demand for skilled labor will rise and the demand for unskilled labor will fall as countries make the transition from a low income to a high income country. This would also show that the countries making such transitions would experience large demand for education and training.

Unemployment in Developed and Developing Countries. (2016, Oct 20). Retrieved from https://studymoose.com/unemployment-in-developed-and-developing-countries-essay 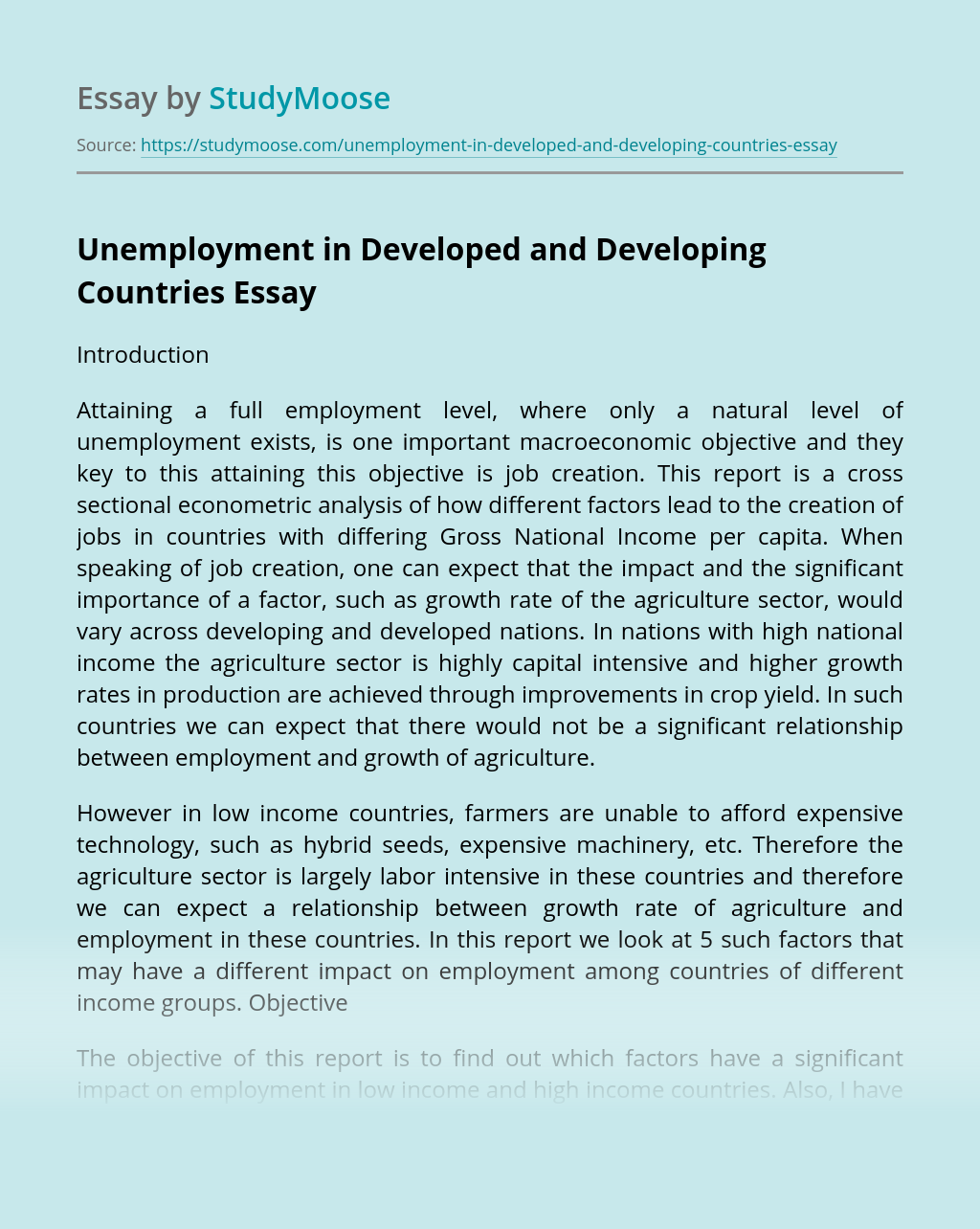