The study of peace is the global analysis and education regarding nonviolence, serving to heighten awareness and therefore promote alternative conflict resolution. It began properly after the second world war. The first recorded program dates back to 1948 at Indiana’s Manchester College. In a world torn by the horrors of the holocaust, pacifism was on the rise amongst both citizens and politicians with the formation of the United Nations in 1945. It has since spread exponentially with the rise of nuclear threats during the Cold War and the hippie movement of the 1960s/1970s.

Don't use plagiarized sources. Get your custom essay on
“ Understanding Concept of Peace ”
Get custom paper
NEW! smart matching with writer

There are over 400 programs in the Unite Stars, and another 100 elsewhere. It is more important now than ever, with the technological development of weaponry and the knowledge of prior conflicts, that we continue to study peace.

Peace can be defined easily by both what it is not and what it is. Peace is the absence of conflict, violence, opposition, and more. The aforementioned can appear in many forms whether it be structural, direct, or cultural; it pervades every aspect of our lives from personal to political.

In a statement made to the United Nations, Secretary General Boutros-Ghali details, “This new dimension of insecurity must not be allowed to obscure the continuing and devastating problems of unchecked population growth, crushing debt burdens, barriers to trade, drugs and the growing disparity between rich and poor. Poverty, disease, famine, oppression and despair abroad, joining to produce 17 million refugees, 20 million displaced person and massive migrations of peoples within and beyond national borders.

” This is called negative peace and is enforced with a more competition-based approach. My personal definition of peace aligns more closely with the opposing positive peace, a gentle attitude that focuses more so on cooperation. I define peace as a setting of stability, justice, human rights, and more. A society in which all can live in harmony without fearing war. This concept was first introduced by Johan Galtung (1964) in the Editorial to the founding editor of the Journal of Peace Research.

Peace studies, through the spreading of knowledge and teaching of nonviolence, is making big strides in building peace. If humankind hopes to one day achieve the peace previously described, it is necessary that the way we think changes. Force should no longer be seen as an option when resolving conflicts. Diplomacy shall instead take place as the dominant route. This ideology is shared by Albert Einstein, who spoke about the threat of nuclear inventions. “We need an essentially new way of thinking if mankind is to survive. Men must radically change their attitudes toward each other and their views of the future. Force must no longer be an instrument of politics… Today, we do not have much time left; it is up to our generation to succeed in thinking differently. If we fail, the days of civilized humanity are numbered.” One of the ways we are helping build peace today is through the United Nations. This organization unites nations to solve global problems through collective action. In 2017, “The organization wrapped up three of its missions: in Liberia (UNMIL), Haiti (MINUSTAH), and Côte d’Ivoire (UNOCI). These missions, all dating back to 2003 or 2004, were the final examples of a relatively successful series of peace operations launched by the Security Council between 1999 and 2005 that were characterized by (i) fairly large military and police components relative to the territories and populations they served; and (ii) a long-term commitment to enabling peaceful politics in post-conflict states, including facilitating multiple electoral cycles.”

I believe that continuing peacekeeping between countries and peacebuilding in those of which that have not yet come to it. Shifting funds and effort toward education would contribute to that. Ignorance, above all, plays a great role in the conflict. ‘There are many problems and dangers that we all face: the massive inequalities that exist in and among the nations, persistence of useless war and violence, the danger of fanaticism of terror, the threats to the environment and to the health of our planet,’ David J. Gross, American Nobel laureate in Physics, said at the 52nd convocation of Indian Statistical Institute here. “The cause of many of these problems is sheer ignorance – the ignorance of science that could solve many of the world’s problems, the ignorance of basic facts such as all of us had a single mother only a few thousand generations ago, makes racism and bigotry still possible while the ignorance of other cultures promotes fanatical nationalism.” 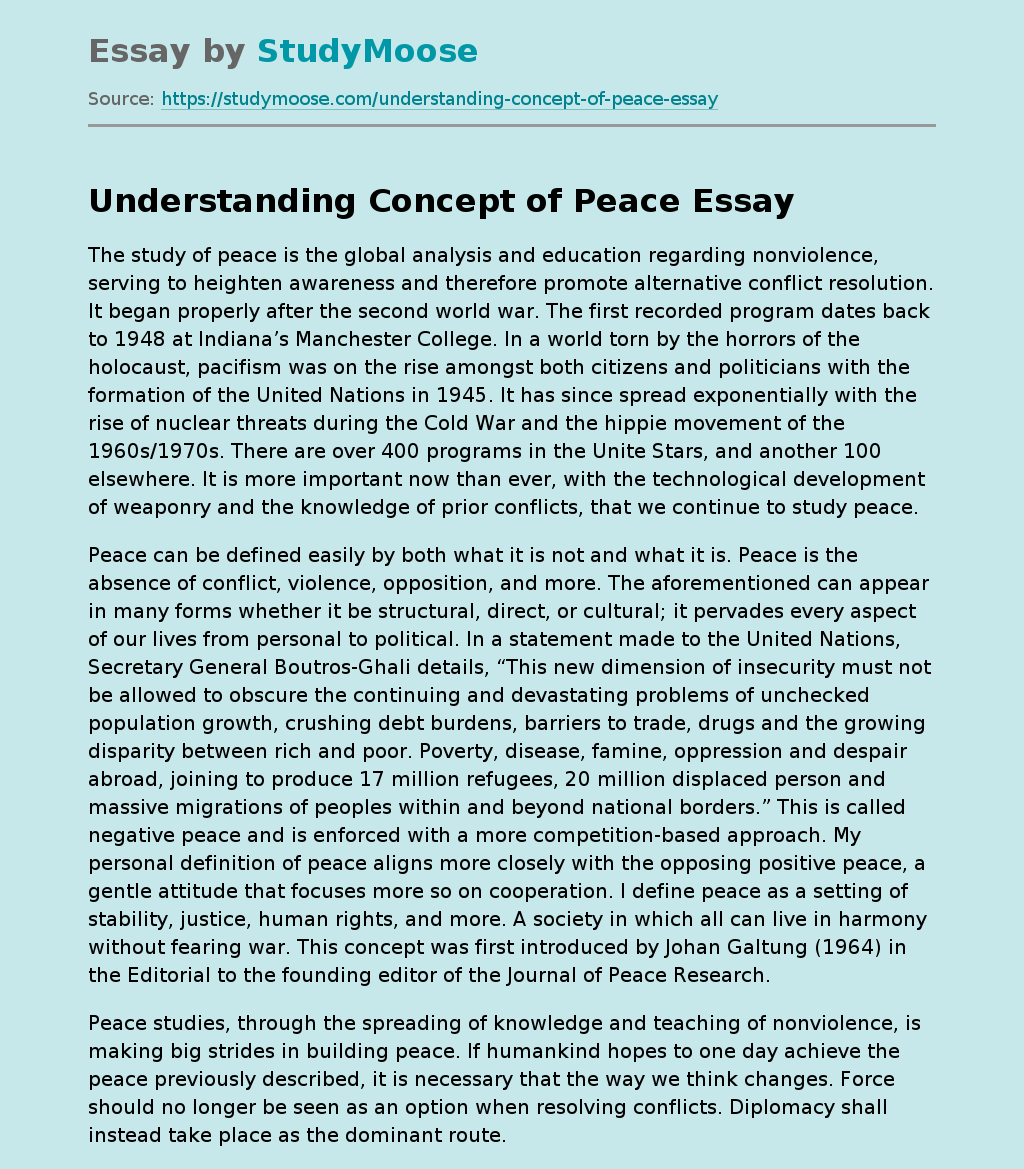