Understand the Neurology of Dementia

1.1 -Describe a range of causes of dementia syndrome.

Dementia is a broad, umbrella term used to describe a family of brain disorders. Within this ‘family’ there are many different types (or causes) of dementia. Some people develop a number of dementias. This is sometimes referred to as a ‘mixed dementia’.

Alzheimer’s disease, which is a common cause of dementia, accounting for over half of all cases. Under a microscope it is possible to see a number of significant changes in the structure of a brain with Alzheimer’s, These include:

A general loss of brain cells.

‘Tangles’ and ‘Plaques’ are microscopic abnormalities found in the brain cells. Both of these cause brain cells to die off at a faster rate than in normal aging. Alzheimer’s tends to affect cells across the brain, as opposed to a specific area. Consequently, over time, the person will tend to experience a range of difficulties.

Vascular dementia is the second most common form of dementia and occurs when the brain is deprived of oxygen. In order to function correctly the brain relies upon a constant flow of oxygen-rich blood. To this end, the brain is richly supplied with blood through a dense network of many millions of blood vessels- known as vascular system. If some of these vessels become diseased or blocked, for example by a blood clot, the brain is starved of oxygen. This in turn causes the death of brain cells, leading to the symptoms of dementia.

The ‘Lewy Bodies’ is a tiny spherical structure (an abnormality) found in the brain. Named after Fredrich H Lewy, the German scientist who first identified them in 1912, these abnormalities contribute to the death of brain cells.

The term ‘Fronto-temproal dementia’ (FTD) covers a range of conditions including Pick’s disease, frontal lobe degeneration and dementia associated with motor neurone disease. All are caused by damage to the front part of the brain (the frontal lobe) and/or the temporal parts (the area above the ears).

1.2 -Describe the types of memory impairment commonly experienced by individuals with dementia.

Likely signs and symptoms of Alzheimer’s disease, a person will often begin by experiencing a mild impairment to their ability to:

Vascular dementia signs and symptoms will vary depending on the area of the brain where blood vessels are diseased or damaged by stroke.
Common signs and symptoms are,
Problems concentrating and communicating.
Symptoms of stroke, such as physical weakness or paralysis.
Memory problems (although this may not be the first symptom).
A ‘steppes’ progression, with symptoms remaining at a constant level and then suddenly deteriorating.
Epileptic seizures.
Periods of acute confusion.
Hallucinations (seeing things that don’t exist)
Delusions (believing things that are not true)
Incontinence.

In terms of signs and symptoms, DLB is similar to Alzheimer’s disease in that it causes difficulties with memory, reasoning and language. However, unlike most cases of Alzheimer’s, Lewy Body deposits are found in the base of the brain (the cerebellum), which is responsible for vision (the occipital lobe). Therefore, people with DLB tend to have difficulties with balance, double vision and/or visual hallucinations.

Lack insight and loss the ability to empathise with others. This can make them appear selfish and unfeeling. Become extrovert when they were previously introverted or withdrawn when they were previously outgoing. Behave inappropriately, for example, making tactless comments, joking at the wrong moments or being rude. Lose their inhibitions, for example, exhibiting sexual behaviour.

Become aggressive.
Be easily distracted.
Develop routines, for example, compulsive rituals.
Experience language difficulties, such as work finding difficulties or reduction in or lack of speech.
Overeat and/or develop a liking for sweet foods.

Dementia, and the difficulties it causes, is one of the most feared health conditions. People with dementia and their families are sometimes reluctant to seek advice when concerned about memory or other problems. But there are many potential benefits to getting medical advice if you’re worried. Being diagnosed early is important for many reasons. It helps you to get the right treatments and to find the best sources of support, as well as to make decisions about the future.

It may not be clear why someone has problems with memory or has a change in behaviour. These problems may be because of dementia, or down to other reasons such as poor sleep, low mood, medications or other medical conditions. This uncertainty can be distressing for both the person experiencing difficulties, and their family and friends. While a diagnosis of dementia can be devastating news, an explanation of what the problem is and what can be done about it can help people feel empowered and reduce some of the worry caused by uncertainty. Some people find it helpful to discuss with doctors and nurses how the dementia may affect them or their loved one in the future, and there is advice available about how to stay independent and live well with dementia.

Dementia is not a single condition – it refers to difficulties with thinking and memory that may be caused by several different underlying diseases. This is one reason why not everyone with dementia experiences the same problems. Identifying that there is a problem, and then diagnosing the underlying cause is important for guiding treatment and accessing services. Some causes of dementia are treatable and reversible (either partially or fully, depending on the nature of the problem). Conditions such as anxiety and depression, some vitamin deficiencies, side effects of medications and certain brain tumours fall into this category. Alzheimer’s disease and dementia with Lewy bodies are neurodegenerative conditions, which means they gradually damage the brain. Cholinesterase inhibitor medications have been shown to have benefit in Alzheimer’s disease and dementia with Lewy bodies.

These treatments (donepezil, rivastigmine and galantamine) improve symptoms by making the remaining brain cells work a bit harder. Memantine is another medication that can help in Alzheimer’s disease. Although not a cure, these medications can make a significant difference to day-to-day living and functioning. Treating high blood pressure, high cholesterol and poorly controlled diabetes is also important, as is stopping smoking and keeping to a healthy weight. These factors (known as risk factors) all contribute strongly to vascular dementia, and may make Alzheimer’s disease worse. Your GP will be able to assess your risk factors, advise if treatment is needed and monitor you. Medications for other conditions can be reviewed in case they are having a negative effect on cognitive functioning.

2.2 -Explain the importance of recording possible signs or symptoms of dementia in an individual in line with agreed ways of working. 2.3 -Explain the process of reporting possible signs of dementia within agreed ways of working. 2.4 -Describe the possible impact of receiving a diagnosis of dementia on National dementia strategies emphasize that the primary purpose of early diagnosis is timely Access to information, advice, and support and access to a pathway of effective treatment And care from the time of diagnosis to end of life care.

The clinical indication for an earlier diagnosis would be that a critical period for some Interventions may lie between the earliest point at which the diagnosis can be made and the Time at which diagnosis is currently made. That is, that the intervention only works, or works Better, when applied earlier than is usually the case.

Currently available drug therapies treat symptoms; they do not fundamentally alter the Course of the disease. Cholinesterase inhibitors (donepezil, rivastigmine and galantamine) Are licensed for mild to moderate Alzheimer’s disease, and memantine for moderate to Severe dementia. They do not appear to benefit people with mild cognitive impairment (16). However, compounds with the potential to slow the progress of the disease may be Developed in the future. Such compounds are likely to work best when applied before Extensive and permanent damage has occurred, therefore in the earliest stages of dementia, Or even before the disease is clinically evident.

Non-pharmacological interventions (therapies which do not involve drugs, including Psychological and psychosocial interventions) have the potential to improve cognitive Function, delay institutionalization, reduce carer strain and psychological illness and improve The quality of life. Information regarding the critical period, if any, for the effectiveness of These interventions are not readily available.

Little attention has been paid to the specific needs of people with dementia and their family Members in the early stages of the disease. In a needs assessment carried out in the USA, There was an expressed need for practical information, financial and legal counseling, Emotional support (particularly provided by other people with dementia and carers), and an Interest in research, including clinical trials for the disease.

2.4a -The individual
Every person who is diagnosed with dementia is different. Not two people are the same. Reactions can very with the individual, from, Confusion,
Shock,
Frightened,
Denial of failings,
Disorientation,
Trying to construct since and meaning into the situation,
Destruction of hope,
Loss of future goals,
May have to retire early,
Financial implications,
May need to stop driving,
Loss of socialisation.

2.4b -Their family and friends

Recognising that a person will have a unique set of needs and preferences is important because: It encourages staff to look beyond the label of dementia and to see the person – at the heart of person-centred care there is a deep appreciation of the unique identity of each individual. Although two people are may have the same type of dementia, their personality and life history will mean that their experience of dementia will be different. Recognising that each person will have unique needs and preferences reminds staff to see the person first and the their dementia second. It helps to maintain well-being – dementia should not strip people of who they are.

Respecting each person’s unique needs and preferences can promote positive feelings about themselves and sense of hope for the future. Knowing a person’s preferences can help staff to promote choice, independence and participation – for example, some people like to go to bed at a set time, others do not. If a person prefers to bath once a week and done so all their life, it should be no great surprise if they become resistant to bathing more frequently. Dementia shouldn’t stop people from having choices and they shouldn’t be forced to fit into the routines of others.

3.3 -Describe how myths and stereotypes related to dementias may affect the individual and their carers.

The medical model of dementia dominated the traditional approach to dementia care up until 1990s. The emergence of a social model of dementia after that time was partly a reaction to this dominance. It was also part of a wider social and civil rights movement at that time which sought to transform the way in which people with disability were viewed and treated. The theory of the ‘social model of disability’ grew out of this movement. This became a tool for helping disabled people to gain a better insight into their situation and to recognise how they were discriminated against and marginalized within wider society.

3.4 -Describe ways in which individuals and carers can be supported to overcome their fears. Seeing dementia as a form of disability is important because it challenges health and social care staff to adapt their care approach and to maximise a person’s remaining strengths and abilities. It also challenges care providers to consider whether the environment within the care setting further disables people with dementia.

Understand the Neurology of Dementia. (2016, Sep 11). Retrieved from http://studymoose.com/understand-the-neurology-of-dementia-essay 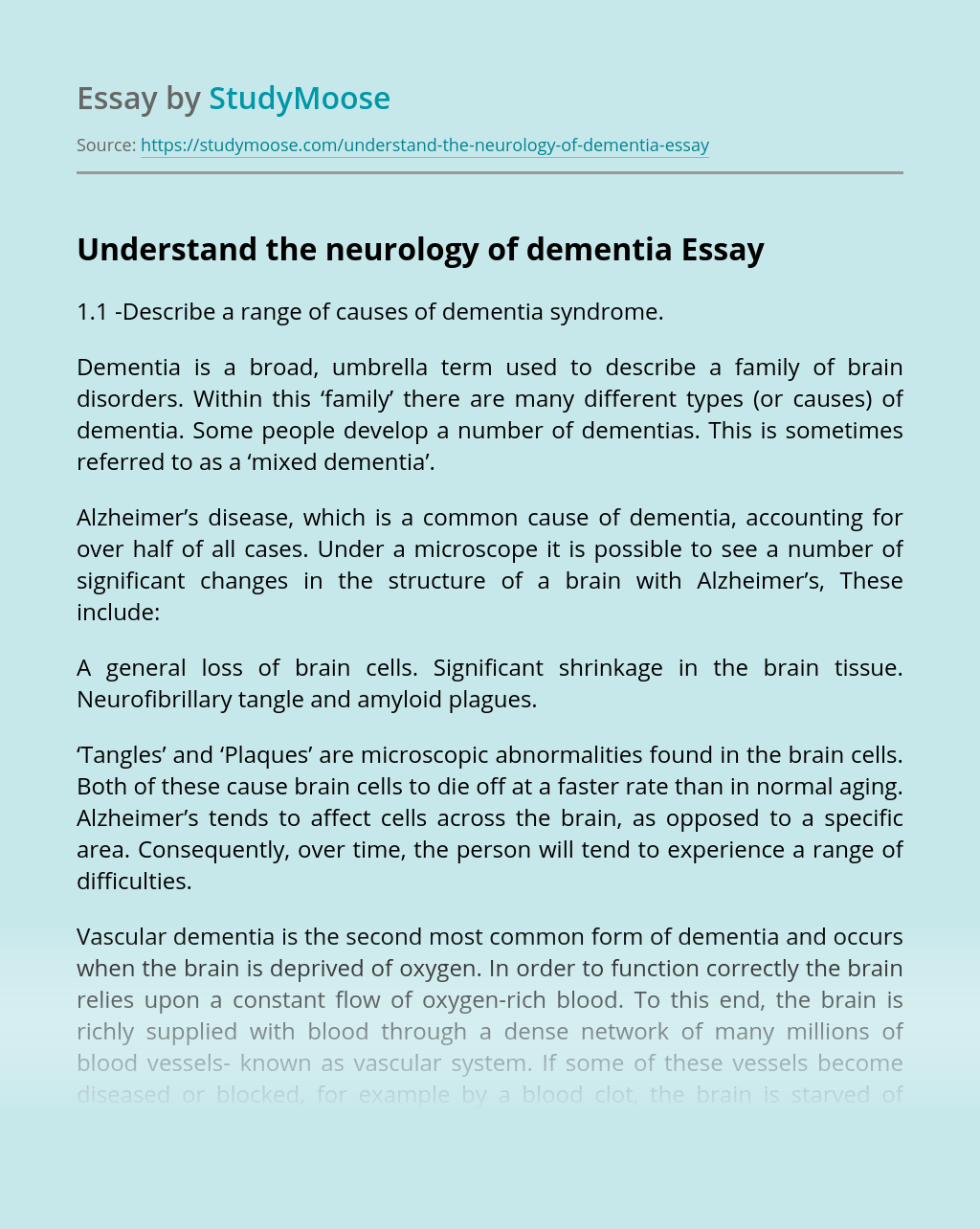 Don’t waste time
Get a verified expert to help you with Understand the Neurology of Dementia
Hire verified expert
$35.80 for a 2-page paper
Stay Safe, Stay Original