1.1 The main types of mental ill health according to the psychiatric (DSM/ICD) classification system are as follows; Adjustment Disorder- A significantly more difficult adjustment to a life situation than would normally be expected considering the circumstances. For example; Adjustment Disorder with Anxiety and Adjustment Disorder with Mixed Disturbance of Emotions and Conduct. Anxiety Disorder- Experience of abnormal or inappropriate anxiety without any recognizable stimulus or when the stimulus does not warrant such a reaction. For example; Agoraphobia and Post Traumatic Stress Disorder.

Don't use plagiarized sources.
Get Your Custom Essay on Understand Mental Health problems Just from $13,9/Page

Dissociative Disorder- A disruption in consciousness, memory, identity or perception, when one of these areas is not working correctly and causing significant distress within the individual. For example; Dissociative Amnesia and Depersonalization Disorder. Eating Disorder- Disturbances in eating behaviour such as eating too much, not eating enough or eating in an extremely unhealthy manner (bingeing). For example; Anorexia Nervosa and Bulimia Nervosa.

see more:explain how individuals experience discrimination due to misinformation assumptions and stereotypes

Impulse-Control Disorder-The failure or extreme difficulty in controlling impulses despite the negative consequences such as the impulse to engage in violent behaviour, sexual behaviour, fire starting, stealing and self-abusive behaviours.

For example; Kleptomania and Pyromania. Mood Disorder- A disturbance in mood such as an inappropriate, exaggerated or limited range of feelings. For example; Bipolar Disorder and Major Depressive Disorder. Personality Disorder- They contain symptoms that are enduring and play a major role in most, if not all, aspects of a person’s life. Symptoms are seen in at least two of the following areas; Thoughts (ways of looking at the world, thinking about self or others, and interacting), Emotions (appropriateness, intensity, and range of emotional functioning), Interpersonal Functioning (relationships and interpersonal skills) and Impulse Control. For example; Antisocial Personality Disorder and Borderline Personality Disorder. Psychotic Disorder- The occurrence of psychosis, or delusions and hallucinations.

Hallucinations can be visual, auditory, olfactory, tactile or taste. For example; Delusional Disorder and Schizophrenia. Sexual Disorder- Paraphilias all have in common distressing and repetitive sexual fantasies, urges or behaviours that either interfere with satisfactory sexual relations or everyday functioning. Individuals are often distressed, typically recognizing the negative impact of these symptoms but unable to control their impulses. For example; Exhibitionism and Fetishism. Sleep Disorder- There are two subcategories; Dyssomnias (relating to the amount, quality and timing of sleep). For example; Primary Insomnia and Narcolepsy. And Parasomnias (abnormal behaviours or physiological events that occur during the process of sleep or sleep-wake transitions. For example; Nightmare Disorder and Sleepwalking Disorder. Somatoform Disorder- Where the symptoms suggest a medical condition but where none can be found by a physician.

A person might experience significant pain without a medical or biological cause or they may constantly experience minor aches and pains without any reason for these pains to exist. For example; Hypochondriasis and Somatization Disorder. Substance Disorder- The abuse or dependence on a substance used to produce a high or alter one’s senses such as alcohol, cocaine, marijuana, heroin, ecstasy, special K and crack. Caffeine and nicotine are included but rarely thought of in this degree. For example; Substance Abuse and Substance Dependence. 1.2 The DSM provides doctors with a definitive list of all recognized mental health conditions but because our understanding of mental health can still be seen as quite limited with room for further exploration, compiling such a guide can itself be seen as controversial. It has its strengths in that it has enabled mental health professionals to have a common diagnostic language but it is limited in its prowess because of our constant evolving knowledge of mental health, meaning with every revision conditions are often removed that are no longer considered valid and new definitions added.

This was most seen in the first publication in 1952 where there was a diagnosis of Homosexuality as a Sociopathic Personality Disorder which wasn’t removed until the early 70s and what is now called Autistic Spectrum Disorder was originally thought to be a form of childhood Schizophrenia. In America the DSM was published to widespread controversy as it was believed that 67% of the DSM-5 taskforce had direct links to the Pharmaceutical Industry and substantial profits were being pocketed. 1.3 Two alternative frameworks for understanding mental distress are Biological/Medical and Behavioural. The first describes psychological problems as resulting from physical causes such as brain injuries and defects and hereditary factors like Down’s syndrome or Cerebral Palsy.

The latter describes patterns of behaviour that may have been conditioned from an early developmental age which have arisen from external stressors and the individual’s personality. 1.4 Mental ill health may be indicated through an individual’s emotions, thinking and behaviour, this can present itself in many ways. For example; a person suffering from Bipolar may exhibit extremes of high and low mood coupled with frenetic and despondent behaviour respectively. They would likely have erratic thoughts and speak very fast in a disjointed manner. In periods of mania the individual may spend lots of money, more than they can afford, make rash decisions, put themselves in dangerous situations and use illegal substances. This is then most likely followed by an episode of depression as the high fades.

2.1 People who have a mental health condition often experience discrimination due to misinformation, assumptions and stereotypes. Even though times have changed and with it opinions, there is still a social stigma surrounding mental illness. Many people believe that people with mental ill health are violent and dangerous. The situation is worsened by the media whereby acts of violence or criminal activity can be linked to mental illness. A religious stereotype says that people with a mental disorder are morally deficient and it is God’s judgement for sinful behaviour. Some people fear that having a mental illness is contagious and they might catch it. These assumptions and views can lead to people with a mental illness receiving second-class physical care, being discriminated against in a job interview, not being covered for mental illness on an insurance claim and wrongly denied social benefits, to name a few.

2.2 Mental ill health can have a huge impact on an individual, this includes; a. Psychological and emotional- Any individual may go from a healthy and fully functioning person to a person dealing with severe and frightening symptoms of mental illness, this can involve psychosis, hallucinations, delusions, mania and you may constantly struggle to maintain your identity. This would all have a negative influence on self-esteem and cause isolation. b. Practical and financial- Persons suffering from mental ill health often find it increasingly difficult to have control over their finances, housing, medical care and general wellbeing.

c. Using Services- Because of the stigma surrounding mental disorders people are less tolerant of those with one and discriminate indirectly and directly, i.e. individuals can find it hard to uphold employment or receive adequate healthcare because of prejudiced views. d. Social exclusion- The nature of mental illness means that people often isolate themselves due to the fear of not being accepted and having ridicule thrown at them. Again this is because of a societal stigma. e. Positive impacts- An individual may shy away from or ignore positive impacts because the mental illness is only allowing negative impacts to be listened to and acted upon.

2.3 Mental ill health can have an impact on those in the individual’s familial, social and work network, this includes; a. Psychological and emotional- Because of the self-deprecating nature of mental illness, families, in particular parents, receive the full force of the impact of a son/daughter who suffers from a mental disorder. It can place great stress on the family as they so desperately try to reach out and help their loved one but the loved one refuses and pushes them further away. In most cases the pain and hurt that a person will cause to their family is unintentional but cases can become aggressive and violent resulting in hospital stays or being sectioned. Being in a relationship with a person who is mentally ill is incredibly difficult, exhausting at times and frustrating, it can be deeply isolating and many relationships end because the partner cannot cope any longer with the constant daily struggle.

b. Practical and financial- People who experience episodes of mania whereby their spending habits are out of control may build up enormous amounts of debt that they cannot afford to pay off and so creditors and loan sharks look to their spouse and family to sort out affairs. c. Using services- A person may have to access a day centre or have a stay in a psychiatric ward and this can cause strain for the family, particularly children, who may not necessarily understand what their mum/dad is going through or why they have to stay with their grandparents for a few months while mum/dad recovers.

d. Social exclusion- Following on from the last point, it may then become difficult for social integration at school as peers bully the child or children because “their mum is crazy”. e. Positive impacts- These can easily be ignored by family as their loved one’s illness takes up so much of their time and minds that things like birthdays and Christmas just don’t exist anymore.

2.4 Early intervention is critical in promoting an individual’s mental health and wellbeing because receiving the right treatment, therapy and medication as soon as a problem occurs is more likely to have a lasting effect on that person’s welfare and mind than if intervention takes place later on when the mental illness has a firmer hold over that person and they might be more resistant to treatment. 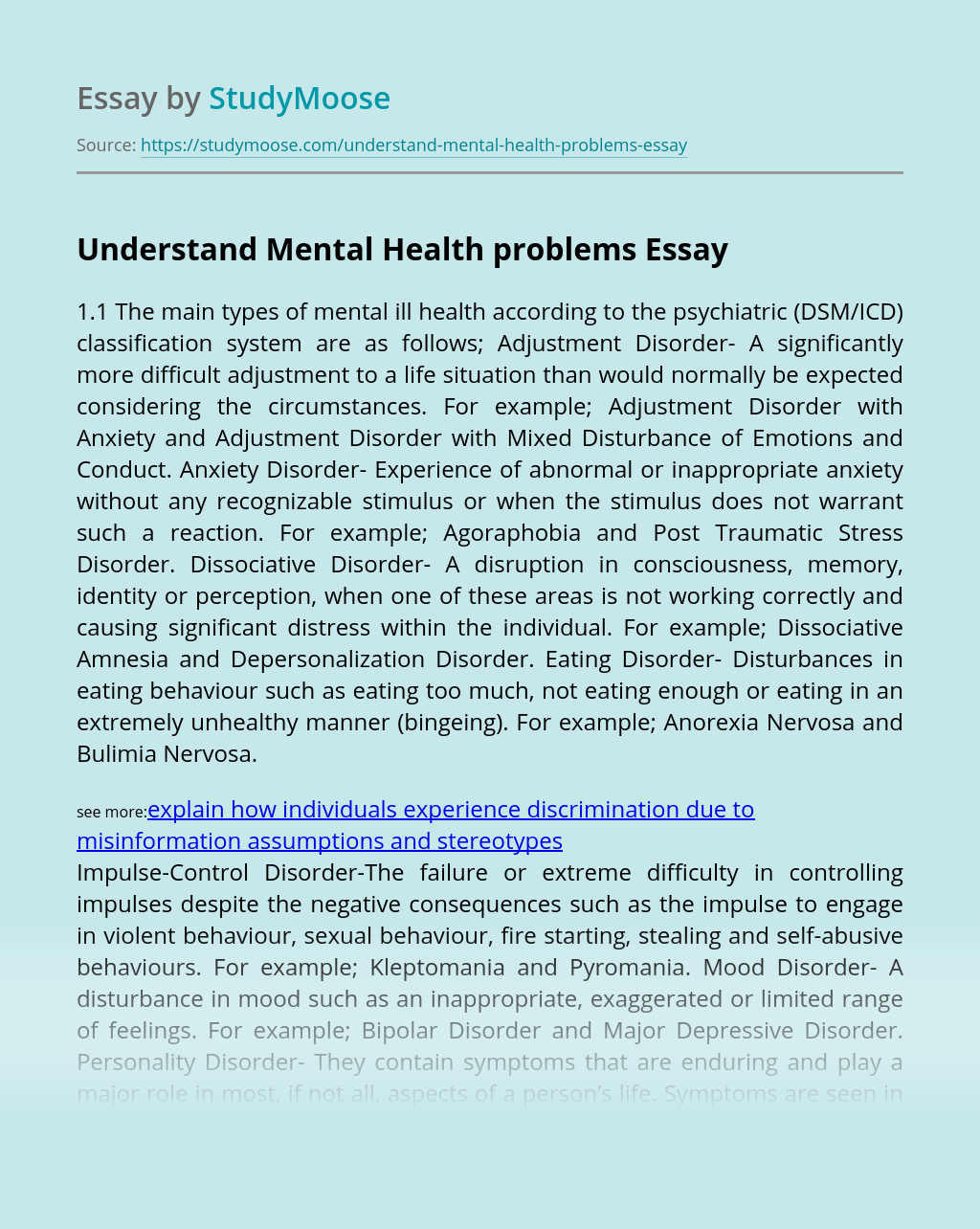 Public health policy analysis Introduction             Legalization of marijuana has been a heated issue and is featured both in local and national media. The use of marijuana by adults and youth in United States is on the increase. Marijuana use remains a medical problem concern since marijuana users are more susceptible to disorders associated to... VIEW ESSAY

A&P If the thyroid gland were removed from a cancer patient, would you expect the level of TSH to rise or fall? Why?             Malignancies of the head and neck include those of the oral cavity, oropharynx, hypopharynx, nasopharynx, nasal cavity, paranasal sinus and larynx. These cancers account for fewer than 5% of all cancers.... VIEW ESSAY

‘All work and no play, makes Jack a dull boy’ – something we were taught in kindergarten, but something we forgot along the way. Although we are all aware of the need and benefits of leisure, it’s not until something seriously goes wrong with our health or relationships that we start thinking about it. The... VIEW ESSAY

Application of the Systems Development Life Cycle (SDLC) in 21st Century Health Care INTRODUCTION The systems development life cycle, in its variant forms, remains one of the oldest and yet still widely used methods of software development and acquisition methods in the information technology (IT) arena. While it has evolved over the years in response... VIEW ESSAY