The Uncanny in "Don't look now"

When Laura asks John to stop at a church, once more the uncanny is presented through the concept of vision and sight. After spotting Wendy, the sister who is not blind, walking through the church, John kneels in front of the alter to hide. In what seems an effort to further hide himself, he covers his face with his hands. Just as he does this, Heather appears from seemingly nowhere and passes directly in front of him. She seems to be staring right at him.

Don't use plagiarized sources. Get your custom essay on
“ The Uncanny in “Don’t look now” ”
Get custom paper
NEW! smart matching with writer

Here we have the elements suggested earlier in the film realizing themselves quite literally in front of each other.

Face to face with blind Heather

Blinded by his hands, John is face to face with blind Heather, who certainly appears to be watching him. This segment provokes an overwhelming sense of the uncanny in the viewer. After leaving the church, the couple go and meet with John’s employer, a Bishop, outside the church that John is restoring.

The Bishop is a very interesting character and makes several notable statements. “The churches belong to God, but he doesn’t seem to care about them. Does he have other priorities? We have stopped listening. ” The last statement is especially true of John who has stopped listening to his own unconscious impulses.

Here it is important to note that psychoanalyst Carl Jung has equated the unconscious image of the child to that of a figure of faith, such as Christ or God, and also that the name of John’s dead daughter is Christine which is clearly related to Christ.

As the Bishop exits he says “St. Nicholas of this church is the patron saint of children and scholars. An interesting combination, don’t you think? ” With children representing the unconscious and scholars obviously representing knowledge this statement is an indication of Johns ignorance to his own unconscious.

The connection of youth and contradictory

This connection of youth as a time of great knowledge is again uncanny and contradictory to what is usually believed. As John and Laura go out for dinner one evening, they get lost in the many dark alleyways of Venice. This scene’s symbolism can be read very literally as John’s own confusion in trying to navigate the inner workings of his mind, and doing so unsuccessfully. The sense of the uncanny pervades the scene. At one moment John becomes entirely sure that he has found the way, but he is lead down to a dead end. He appears oddly affected by the place and says “I know this place.

” Freud recounts a story of nearly the same nature: As I was walking, one hot summer afternoon, throughout the deserted streets of a provincial town in Italy which was unknown to me, I found myself in a quarter of whose character I could not long remain in doubt. Nothing but painted women were to be seen at the windows of the small houses, and I hastened to leave the narrow street at the next turning. But after having wandered about for a time without enquiring my way, I suddenly found myself back in the same street, where my presence was now beginning to excite attention.

I hurried away once more, only to arrive by another detour at the same place yet a third time. Now, however, a feeling came over me which I can only describe as uncanny. The viewer realizes later on that this uncanny feeling that John experiences is, in fact, another premonition of the future. It is in this environment that John first sees the red figure in Venice. He noticed it in his slide earlier but paid little attention to it. Now he sees it scurry by after hearing a scream come from somewhere nearby. This is uncanny for several reasons.

First, the viewer can not be sure if what their seeing is a reality, illusion or something supernatural. The viewer question’s what they are experiencing and probes their feelings for a logical answer. The second is the existence of the “double. ” Freud describes that the uncanny elements of the double are cause by a confusion of the idea of “self”; that confronting the double attacks the idea of just what exactly one’s identity is. “The ‘double’ was originally an insurance against the destruction of the ego, an ‘energetic denial of the power of death. ‘…

But when this stage has been surmounted, the ‘double’ reverses its aspect. From having been an assurance of immortality, it becomes the uncanny harbinger of death. ” In Don’t Look Now it seems that this description is played out almost exactly as it is read. It is this red figure, this monstrous double of young Christine, that ultimately kills John. From this point in the film, John’s repression and the turmoil it causes begins to accelerate. The presentation of the figure forces him to push down harder and deeper the feelings he is receiving from his unconscious. He begins drinking heavily as a way to cope.

When Laura goes to visit the sisters to have a seance of sorts to speak with Christine, Heather goes into a trance like state and begins convulsing and seems possessed. Freud describes how these things are uncanny: “the uncanny effect of epilepsy and of madness has the same origin. The layman sees in them the working of forces hitherto unsuspected in his fellow-men, but at the same time he is dimly aware of them in remote corners of his own being. ” Heather also confuses gender lines here. Her actions seemingly become highly sexualized. She moves rhythmically and rubs her chest aggressively.

At the same time her appearance is not wholly gendered. She is in fact very androgynous, which is further noticed through her questionable relationship with her sister. The uncanny again makes an appearance in the scene where John narrowly escapes a fall from a platform inside the church he is restoring. He climbs up to the platform and examines a mosaic of Jesus, paying little attention to the image or what it represents, and only examining the finite details of the tiles. Everyone in the church looks on as he works. When the platform gives way the workers rush to aid him.

Everyone seems surprised except for the Bishop. This implies that the Bishop has some form of knowledge that this was going to happen. He seems to know the unknowable. Afterwards, John and the Bishop take a walk through the streets. Here, the Other presents itself once more. Not in the form of the red figure, but in a body being pulled from the canal. It is a woman that has a striking resemblance to Laura, whom left for London earlier that day. John has several quick visions, one of him falling from the scaffolding, and another of Christine coming out of the pond.

Reiteration of the symbolic danger

This is a reiteration of the symbolic danger of the unconscious. If one is in it too long, they cannot survive. The moments leading up to the death of John bring together nearly all the elements of the uncanny that were present in the rest of the film. There is the blind leading the sighted as Heather guides John back to the hotel. Then Heather once more goes into a psychic fit and her sister has to hold her down. As John leaves he sees the red figure scurry past down an alleyway. The figure runs from him and, after a vision of Christine reflected in the water, he chases the figure.

The Bishop is stirred from his sleep with what seems to be a premonition of the upcoming tragedy. After cornering the figure, It reveals itself as a grotesque dwarf. It’s gender is not wholly certain and it appears androgynous like Heather did earlier. The theory of the ‘double’ is completed here as we have both sides present; The innocent and beautiful Christine and the violent and horrifying dwarf. As John dies he realizes that the warning signs had been around him all along. His foot breaks a pane of glass, symbolizing his passage from conscious to unconscious and life to death.

This film represents a realization of all that we fear when we experience the feeling of the uncanny. That is where its true horror lies, not just the encounter of something horrifying, but the presentation that all the strange feelings and goose-bumps that someone may experience over their life are in fact warranted, that these deep urges are a warning that should not be shrugged off or taken lightly. Don’t Look Now does not use the uncanny as a device for storytelling, it instead uses the story as a device to impart the uncanny. It succeeds to literally embody the mood and concept of the uncanny. 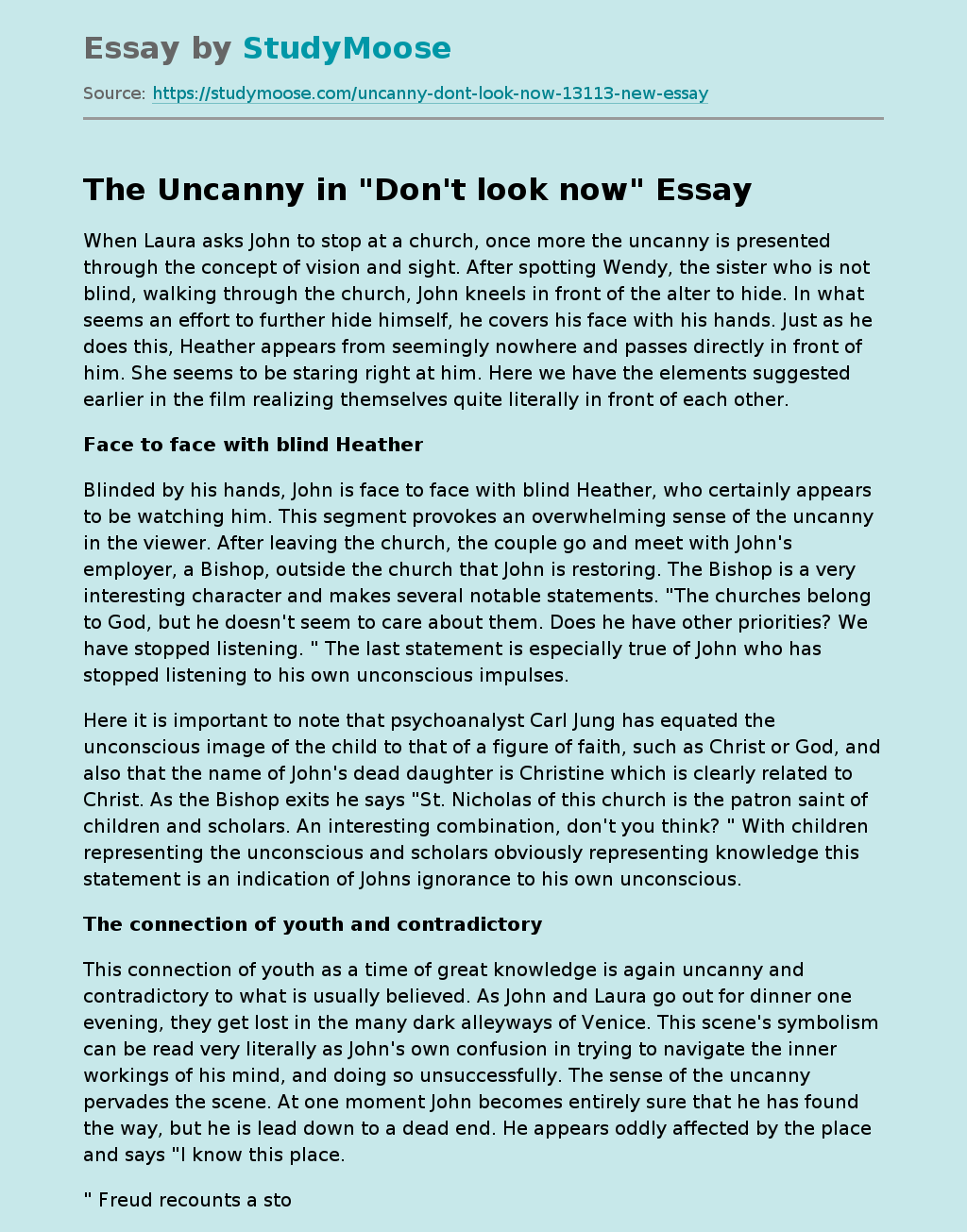