Pg 12- “In the back bedroom he could hear trains passing. Lying beside him sleeping brother, he’d listen to the broad, low sound: faint, then rising, faint again, then high, beckoning whistles, then gone. The sound of it brought goose bumps. Lost in longing, Louie imagined himself on a train, rolling into country he couldn’t see, growing smaller and more distant until he disappeared.”

Pg 25- “For several strides he hesitated. Then he saw the last curve ahead, and the sight slapped him awake.

Don't use plagiarized sources. Get your custom essay on
“ Unbroken Dialectical Journals ”
Get custom paper
NEW! smart matching with writer

He opened up as fast as he could go.”

Pg 46- “At Hickam Field, soldiers were washing a car. On hula lane, a family was dressing for mass. At the officers club at Wheeler Field, men were leaving a poker game. In the barracks, two men were in the midst of a pillow fight. At Ewa Mooring Mast Field, a technical sergeant was peering through the lens of a camera at his three-year-old son.”

Pg 55- “The first thing people tended to notice about Phillips was that they hadn’t noticed him earlier.

He was so recessive that he could be in a room for a long time before anyone realized that he was there. He was smallish, short-legged. Some of the men called him sandblaster because, said one pilot, ‘his fanny was so close to the ground.’”

Pg 65- “From this day forward, until victory or defeat, transfer, discharge, capture, or death took them from it, the vast pacific would be beneath and around them.

Its bottom was already littered with downed was planes and the ghosts of lost airmen. Every day of this long and ferocious war, more would join them.”

Pg 74- “Tracers from firing above and below streaked the air in yellow, red,
and green. As Pillsbury watched the clamor of colors, he thought of Christmas. Then he remembered: They had crossed the international date line and passed midnight. It was Christmas.”

Pg 109- “The tonnage coming down, he late wrote ‘seemed like a railroad carload. The bombs sounded like someone pushing a piano down a long ramp before they hit and exploded…’”

Pg 142- “The men threw back their heads, spilled their bodies back, spread their arms, and opened their mouths. The rain fell on their chests, lips, faces, tongues. It soothed their skin, washed the salt and sweat and fuel from their pores, slid down their throats, fed their bodies. It was a sensory explosion.”

Pg 183- “But on Kwajalein the guards sought to deprive them of something that had sustained them even as all else had been lost: dignity. This self respect a self-worth, the innermost armament of the soul, lies at the heart of the humanness; to be deprived of it is to be dehumanized, to be cleaved from, and cast below, mankind.”

Pg 192- “Gathered in drifts against the buildings were some two hundred whisper-thin captive allied servicemen. Every one of them had their eyes fixed on the ground. They were as silent as snow.”

Pg 206- “Everyone knew the consequences would be if anyone were caught stealing newspapers or hiding items as incriminating as Harris’s maps and dictionary. At the same time, it seemed worth the risk.”

Pg 238- “From the moment that Wantanbe locked eyes with Louie Zamperini an officer, a famous Olympian, and a man for whom which defiance was a second nature, no man obsessed him more.”

Pg 265- “Louie began to come apart. At night, the bird stalked his dreams, screeching, seething, and his belt buckle flying at Louie’s skull. In the dreams, the smothered rage in Louie would overwhelm him, and he’d find himself on top of his monster, his hands on the corporal’s neck, strangling the life from him.”

Pg 296- “He felt his conscience slipping, his mind lacking adhesion, until all he knew was a single thought. He cannot break me.”

Pg 300- “A fantastically huge, roiling cloud, glowing bluish gray, swaggered over the city. It was more than three miles tall. Below is, Hiroshima was boiling.”

Pg 366 “The paradox of vengefulness is that it makes men dependent upon those who have harmed them, believing that their release from pain will come when they make their tormenters suffer. In seeking the Birds death to free him, Louie had chained himself once again, to his tyrant.”

Pg 379- “In Sugamo prison, as he was told of Wantanbe’s fate, all Louie saw was a lost person, a life now beyond redemption. HE felt something that he had never felt for his captor before. With a shiver of amazement, he realized that it was compassion.” Explanation

A lot of imagery to describe the sound Louie heard as the trained passed. The train could also be a symbolic of hope. Louie felt trapped, but the image he saw in his mind was the way out. He wished to be taken away from the struggles of his childhood and a train represented that escape to him.

The author is personifying the sight of the last curve. In the race Louie intimidated by the other runners. Suddenly he was slapped in the face by the realization that the race was almost over and he was not winning. This shows Louie’s competitiveness and perseverance.

Repetition in this paragraph created a suspense feeling for the reader. By using the same sentence structure talking about very different people and random events. Obviously the author was leading up to a big event. The different people and locations give a sense that everyone everywhere was impacted by the bombing at pearl harbor.

Phillips character was introduced as not being very noticeable. Probably he was quiet and had a small figure. Phillips and Louie got along well because even though they are different Louie appreciated his companionship. The nickname shows that the other officers may not have respected him as much as Louie did.

This paragraph sets a scary yet powerful tone. It makes you stop and think of the amount of people who died fighting for our country. The imagery of the lost airmen and littered ocean floor added to the scary tone.

The imagery of the bombs and colors of the tracers helped the reader imagine what it looked like. Pillsbury related the colors and lights to Christmas. It was funny (not exactly funny) that something as terrible as an air raid in a war landed on day as pure and joyful as Christmas.

Staff Sergeant Frank Rosynek used similes to describe the scene as the base was bombed. It Is impossible for a person been in an air raid to wrap their mind around what it was like. However through description the reader can adapt a better understanding and connect to the vent. The image of the piano crashing really conveys the sound and chaos.

When the men crashed their plane into the pacific most of the crew died but of the survivors Phil was highest in command and he offered Louie the position. This sentence was a very broad making the reader question. Was he glad it was Louie who survived? Or glad he would take command? Or did it go back further and mean he was glad to have Louie as a friend and a partner?

The author used imagery to describe how the rain fell to the men. It was different to read that something as simple as rain could cause a “sensory explosion.” This shows deprivation that the survivors experienced from being stranded so long. It makes the reader think of how hard it was to keep hope through such pain.

Louie’s thought gives us a greater understanding of the character. As he looked at his weak body Louie was disgusted. Louie’s thoughts were changing to hopeless. He was commenting on his physical state of and predicting his death and calling himself dead body.

A big theme in this book is dehumanization. The guards took away Louie’s dignity and he began to think of himself as worthless. Hope is just as important to a person survival as food and water. Throughout the entire novel, Louie and his fellow prisoners were treated as less than humans and were very destructive to their mental health. This shows Louie has inner strength to persevere.

The simile “as silent as snow” was very effective in describing the captives. Snow makes no noises as it falls and is light and wispy.

The captives stole Items, many of them inconsequential, and hid them from the guards. This means they were risking severe punishment and possibly death to simply go against the guards in little ways. Though it seems like a lot of risk these small things allowed the men to keep their dignity helping to save their lives.

The description used made the reader better understand the tenses of the situation, Wantanbe’s unstable nature and erratic behavior was shown by using the metaphor of a volcano. Volcanoes are unpredictable and dangerous, as was the bird. Using a direct quote from a captive also helped to illustrate the situation and make information seem more relatable.

The Phrases used to describe Louie explain why he was perfect enemy for Wantanbe. The line “no man obsessed him more,” added to the drama. This also developed Wantanbe’s character showing how jealous he was over Louie’s officer position as well as his hatred for Louie’s boldness and defiance.

The tone of the passage was revengeful. Louie’s built up fury and frustration was released in his dream. Dreams can show a lot about a person’s troubles, and it clearly shows that the bird’s torture is mentally affecting Louie.

The bird forced Louie to stand, holding a beam over his head and if he slipped he would be hit with the gun. This torture didn’t break Louie which shows how strong his character was. The sentence, “he cannot break me,” was very short but powerful sentence. Even when he is experience extreme amounts of pain those were the 4 words he came up with.

Very detailed imagery described the vastness of bomb dropped on Hiroshima. A person could imagine the huge cloud over the city and the damage done underneath that cloud. Figurative language was used with the term “boiling” to describe Hiroshima and the damage.

That’s the author’s opinion that vengefulness is a paradox. Louie once allowed the bird to control and torture him. Louie’s had finally physically escaped the bird but was now mentally haunted due to his refusal to let go. While striving to ease the pain he is causing himself more pain.

The last theme of Unbroken introduced was forgiveness. Louie stopped hating the bird and began to feel sorry for him. Louie probably never thought of Wantanbe as human until then. After Louie found hope in god. Rather than revenge, it was forgiveness which finally eased his pain and allowed him to move on. 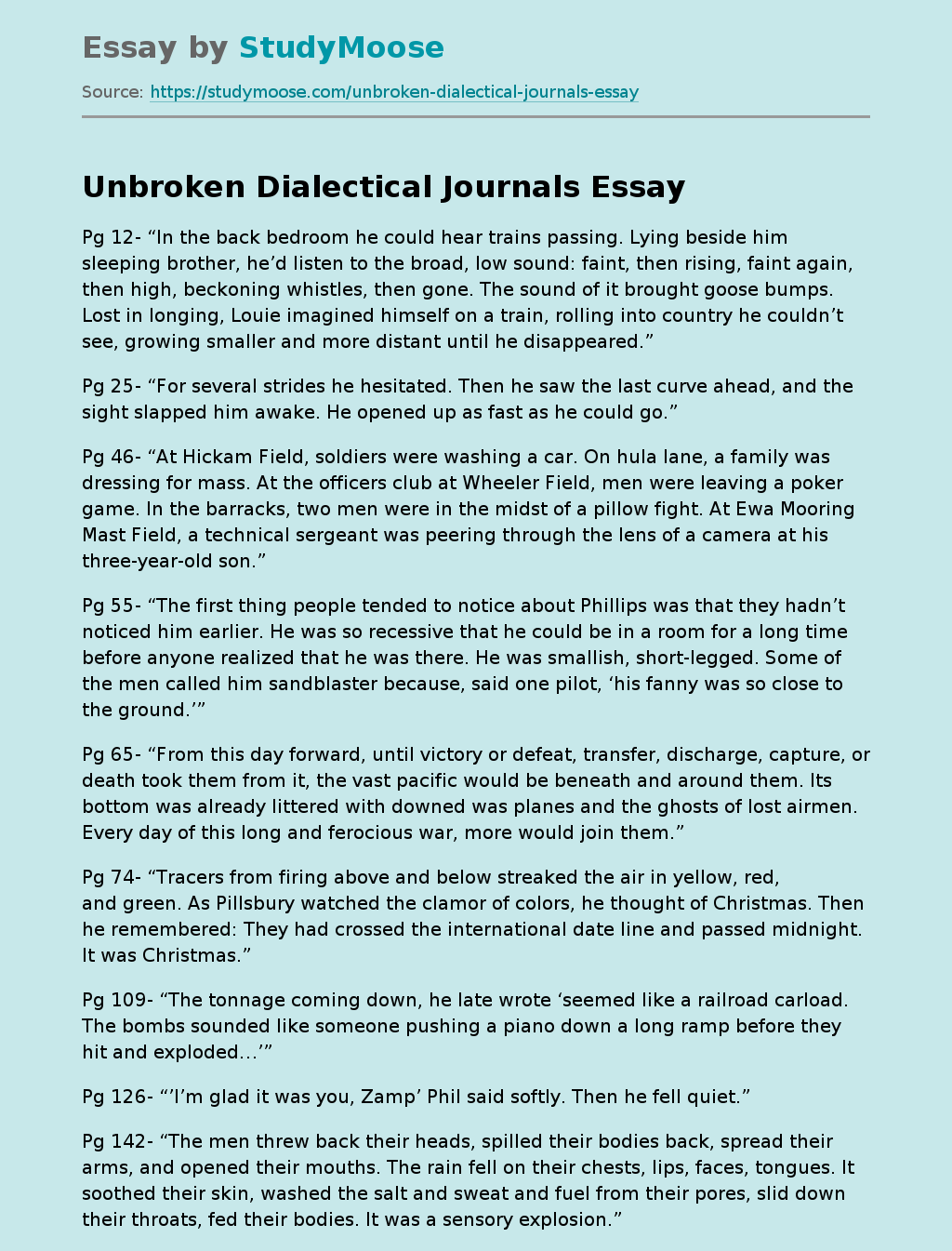