Ultranationalism is a form of nationalism that often leads to conflicts within a state and can lead to travesties and devastation. Genocide, war, racial discrimination, cultural assimilation and death of innocent humans are common attributes associated with ultra nationalism. In extreme cases ultra nationalism leads to fascism, which in turn leaves no political opposition. The given source may be an example of fascism as it states, “subjugate those that oppose us”. We as a society should not embrace the perspective because it is an act of ultranationalism.

Don't use plagiarized sources. Get your custom essay on
“ Ultranationalism: Nazism and Black Sudanese People ”
Get custom paper
NEW! smart matching with writer

Fascism is a radical and authoritarian nationalist political ideology that is lead by ultra nationalism. It is evident in the given source that the author was fascist in their actions to “subjugate” those that oppose. This may be in political parties or minimal things such as a countries education system, and media. With complete control of a countries political parties one has no options in voting for an ulterior party. Education will teach future generations to work to the advantage of one’s country or leader.

Minimal forms of media will entitle the leader or dictator to choice in what the country knows of the surrounding world, and easy opportunities for propaganda. This quote can be represented in the example of Nazi Germany. Political opposition was oppressed in Nazi Germany, as the Nazi party was the only legal party. Night of the long knives is an example of ultra-nationalism as it was a great purge claiming the lives of many people that may have opposed Hitler, or that Hitler feared had the power to remove him as Further.

Censorship is needed in ultranationalism, as a government needs total control in order to be in complete power. In Nazi Germany the aim of censorship was simple: to reinforce Nazi power and to suppress opposing viewpoints and information. Control of the countries education was also needed in creating a future generation that was blindly loyal to Hitler and the Nazis. By burning books, only teaching things that showed Germany in a positive fashion, and showing propaganda of groups.

That were used as scapegoats, Hitler succeeded in his actions to complete control of German schooling. This is an act of ultra-nationalism because, it was a crime against humanity, and no matter what ethnicity or religion one was they would be killed if they chose to oppose Hitler’s orders, or would have been sent to concentration camps where they were left to die on the soil of their own country.

By standing up for their rights civilians slowly were able to regain their country and take control in a nationalistic manner. Today’s form of ultranationalism has not differed from historical events, The genocide in Darfur for example is an example because Darfur is run by the Sudanese government who ultimately is run by Omar al Bashir’s rules and regulations, such as suppressing anyone who is opposing his rule. By sending out the Janjaweed, a group Omar runs to: kill, rape, or discriminate the opposing parties.

By embracing the acts of ultra-nationalism people are not able to see the negative effects on the people who are strictly against it such as people in Darfur who worked for the Janjaweed so they could live a better life, civilians who ceased an opportunity to work for Omar were un aware of homeland being destroyed, wives being raped, children being killed, by not contributing to the act, the outcomes were still negative to a party.

With this evidence it is safe to state that, ultranationalism is not a concept that should have ever been embraced by anyone, clearly it has brought sadness among the world, all ultra-nationalistic issues were resolved, but at the cost of millions of lives. By not embracing ultra-nationalism millions of lives can be saved, not only lives but thousands of cultures have the chance of being rebuilt again, to create a perfect society. 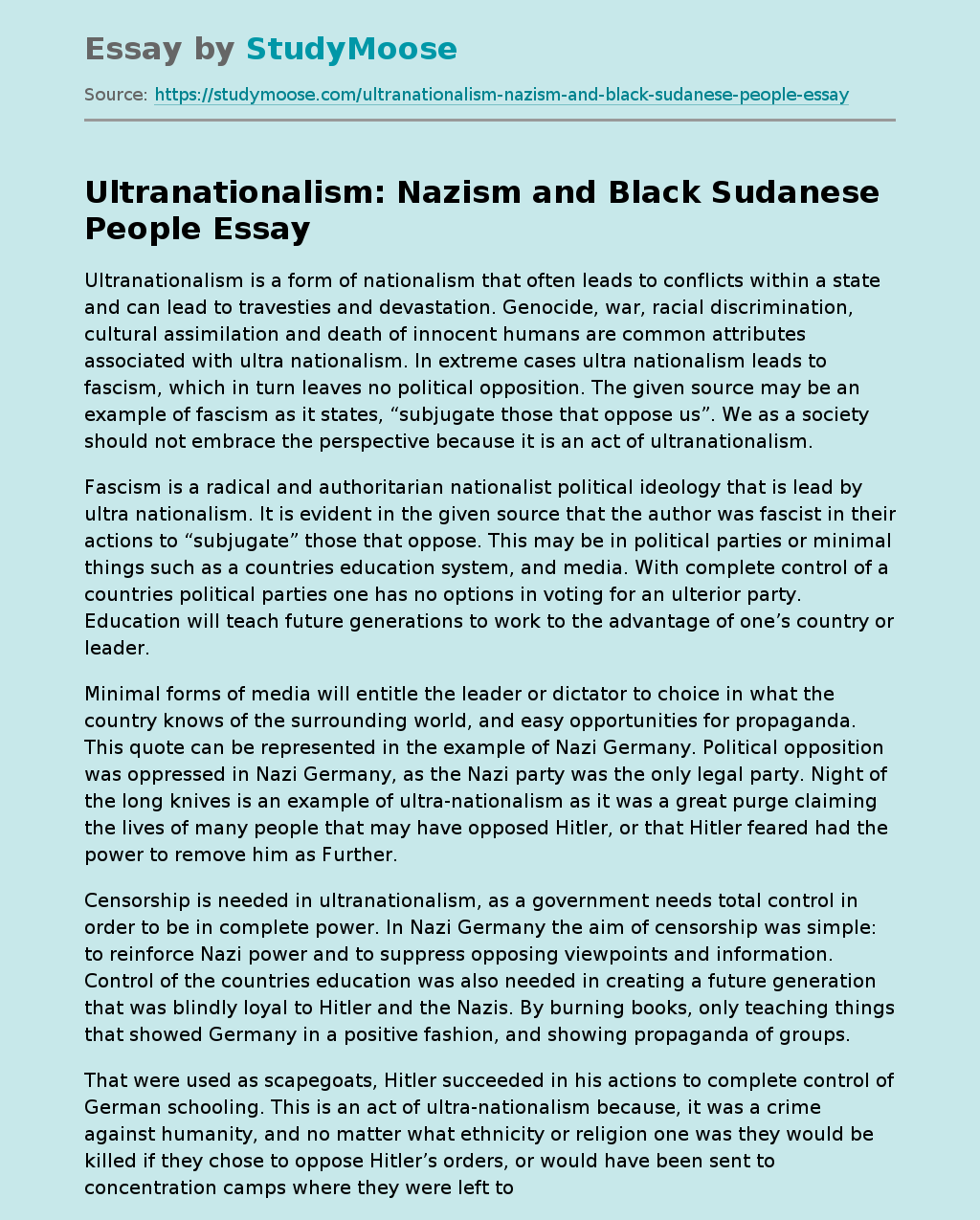