Does the UK have any extreme environments?

The Lake District National Park is the mountainous region located in the north – west of England, in the county of Cumbria, just south of Scotland. It’s the largest National Park in England and Wales. It covers approximately 2,290 km/ 800 square miles.

Lake District is a mountainous area which makes population settlement difficult because of its high altitude environment. The floods of November 2009 were consistent with predictions for climate change and around 1,300 homes and businesses were destroyed by the floods. The climate of Lake District is not temperate; the region has very high rainfall between 100mm and 250mm.

Don't use plagiarized sources. Get your custom essay on
“ Does the UK have any extreme environments? ”
Get custom paper
NEW! smart matching with writer

During the year, the temperature is very windy and the fog is dense, the temperature could go down to -18’c. Furthermore there are factors which suggest that this is an extreme environment, as in some cases there is damage to public access and transport infrastructure by extreme weather events particularly floods of sea level rise damaging public access and buildings. Lower river flows and lake levels will result in pollution and higher water temperatures in summer leading to impacts on vulnerable species, therefore will impact vegetation too.

The factors responsible for a densely populated area are due to mountainous areas that prevent people from building shops, houses and growing vegetation.

However, what brings tourists to these mountainous areas is the site seeing of the natural untouched environment. The people living in the area use the environment to do lots of various activities such as rock climbing, canoeing, wind surfing, swimming, camping, site seeing, scientific research that could be used by people, hiking, fishing, riding, walking, for educational use, school trips etc.

Although the environments are extreme they are not as harsh or challenging as other areas in the world like for example Antarctica on the other hand. Antarctica is located at the South Pole and is surrounded by the Southern Ocean, the terrain is made up of 99% mainly ice. It is a magnificent and largely uninhabited wilderness with majestic mountains, glaciers, icebergs and abundant wildlife. Mean temperatures in land vary from-40″C to -70’C in the coldest month and from -1 5’C to -35″C in the warmest month.

Not only is Antarctica freezing cold, these temperatures make it a truly an EXTREME environment, very dangerous for humans to visit and live with also the lack of vegetation. The indigenous people who habitats are in these harsh environments adapt by wearing thick layers of fur coat. They need to hunt for food which means travelling (kms) with the help of artic wolves. Moreover, every journey to hunt for food is extremely risky and life threatening because the ice is unstable. The rising of food prices in a supermarket have increased, suggests that they will have to starve for a while as they’ll need to make profit from some of the food they’ve hunted. Adding on, there is no accessibility to direct medical help, doctors, shops (except for one supermarket), and hardly any electricity which means no internet access. In addition, for many months during the year there is 24 hours of darkness or 24 hours of light as the Earth orbits the sun. Therefore, this means the people will need to prepare the right equipment’s and food sources when these days encounter. The lowest ever temperatures recorded on Earth have been recorded here, at Vostok, Antarctica, where it dropped to nearly -89.2 °C.

Although Antarctica is becoming a very popular destination for tourists, there is some concern that too many people will change the nature of the area. Not only do they visit in cruise ships but some tours offer the possibility of skiing to the South Pole! Others go hiking, rock climbing, hunting, snow walking and collecting scientific researches.

In conclusion, I think Antarctica is the most extreme environment compared to Lake District. This is because the environment is remote and so harsh that it is inaccessibility to humans and difficult for plants and animals to live in as it is extremely cold and has a very high altitude and limited amount of resources, services and infrastructure. The indigenous people have to do a lot of hard physical work, as it’s hard for crops and vegetation to grow in this particular habitat, is hard for people to keep warm without burning firewood. On the other hand, Lake District might be extreme enough for people living in that particular environment as the might not have experienced beyond extreme, or maybe because they have access to these facilities and services, is much easier to receive as the infrastructure and services are quite advanced. But they have accessibility to shops, electricity, heating, internet access, doctors and schools, moreover for people living in Lake District, are suffering or finding hard to live have the government to provide them a subsidy, whereas in Antarctica they don’t.

Does the UK have any extreme environments?. (2020, Jun 02). Retrieved from https://studymoose.com/uk-extreme-environments-new-essay 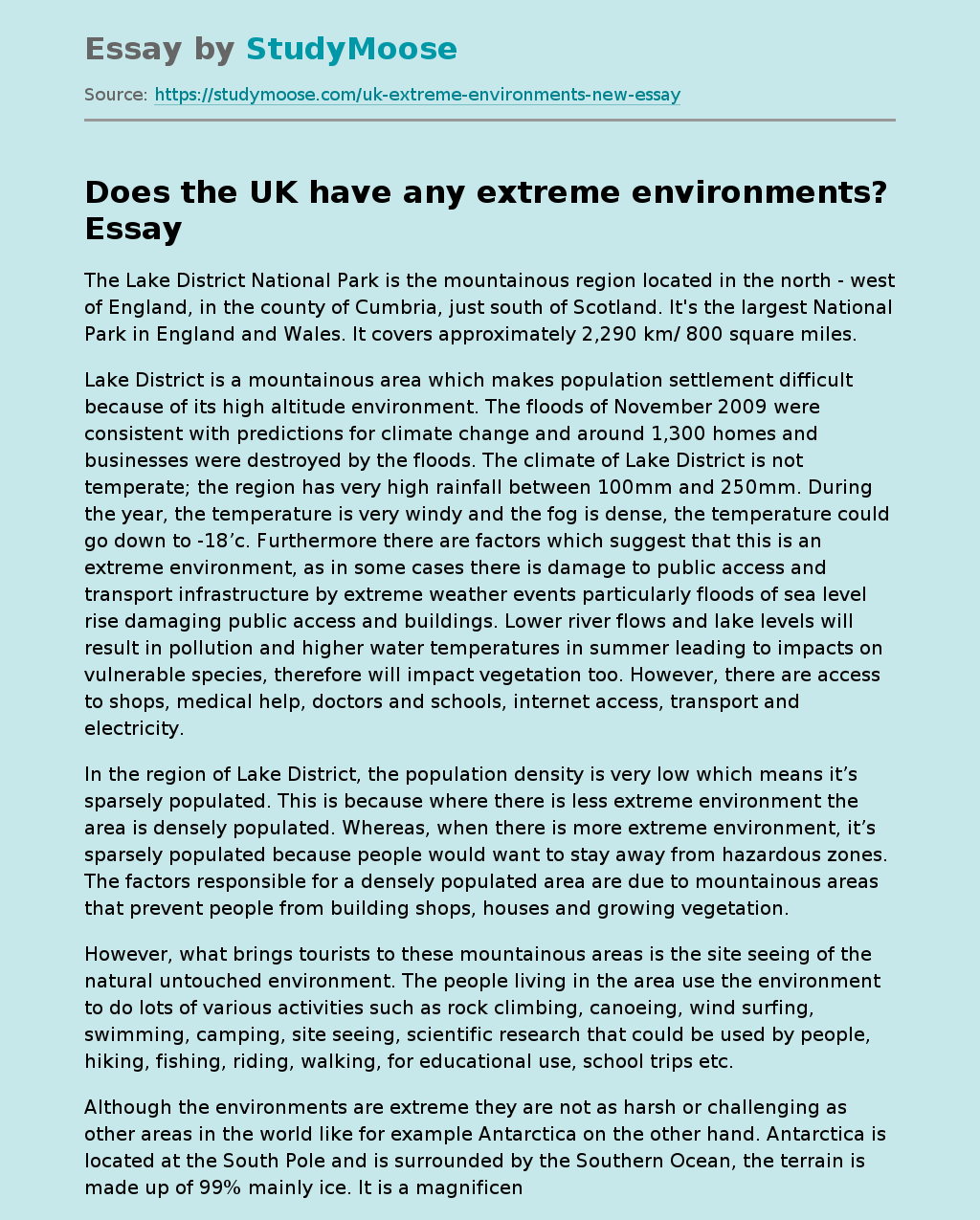