The construction of modern buildings has been constantly improving in providing world class architectural designs and durable construction materials that can help buildings withstand earthquakes and even fire hazards. It is the prime responsibilities of engineers and architects to ensure the building’s safety. Presence of skyscrapers and other high-rise buildings have become symbols of urban landscape. In planning the construction of buildings the safety of the occupants should always be consider. That is why there are building codes and specific safety measures and devices to make the buildings safe from danger.

Don't use plagiarized sources. Get your custom essay on
“ U.S. History of Building Construction and Fire Safety ”
Get custom paper
NEW! smart matching with writer

Building disasters usually comes from natural cause like earthquakes that is why earthquake proof buildings were constructed. Others are due to human factors brought by neglect or by terrorist attacks which can cause fire explosions inside building infrastructures. The U. S. history of building constructions had undergone necessary improvements and adjustments to their construction and planning in the passage of years to meet the safety standards of buildings therefore reducing the casualties in times of disasters.

Fire safety and preservation of people’s lives are now the main focus in building structures and has been the greatest challenge for engineering firms. It is the goal of developers, architects, engineers and safety officials to conform to safety codes to prevent lost of lives due to fire and earthquake hazards. Building fires and structure failure are investigated and analyzed to understand the factors that contribute to the catastrophe.

The investigations will establish the likely technical causes of the building failures and evaluate the technical aspects of emergency response and evacuation procedures in the wake of such failures.

The goal is to encouraged improvements to the way in which buildings are designed, constructed, maintained and used. (National Institute Of Standards and Technology, 2008) History of Building Construction Changes in the Context of Fire Safety and Prevention Fire protection engineers with the help of science and technology develop means to protect people and property from fire.

However it wasn’t until the later part of the 20th century that fire protection engineering had matured to the point that it included the fundamental tenets of professional and personal discipline. (Hurley, 2008) In 1800 English inventor John Carry designed the first crude automatic sprinkler but it went underdeveloped for a long period of time. In 1852 a patent was issued for first sprinkler-perforated pipe system which was the first recognized installation of fire protection equipment. In 1921 California passed a law forbidding wooden shingles on roofs but pressure from the roofing industry brought repeal.

The required width of the means of egress should not be obstructed or reduce in any manner. Every floor area should also be provided with at least two approved independent exits. (NIST, 2008) Examples of Major Cases in U. S. History That Led To Changes in Building Construction Major cases of fire incidents happen in different settings like hotel, industrial areas, hospitals, warehouses, restaurants, night clubs, and high-rise buildings. High-rise building fires differ from low-rise building fires. A high rise building can be described as structure more than 75 feet high while aerial ladder reaches only 75 feet.

People trapped in a burning high rise building who cannot be reached by the highest ladder will usually leap to their deaths or remain trapped inside the buildings. (High-rise Fires, 2008) Interstate Bank Building Fires in Los Angeles, California The Interstate Bank Building Fire in Los Angeles, California that happened May 4, 1988 was one of the most destructive high-rise fires in recent United States history. The fire presented the greatest potential for a “towering inferno” scenario of any U. S. fire experience and was controlled through massive and manual fire suppression efforts.

It demonstrated the absolute need for automatic sprinklers to provide protection for tall buildings. The fire destroyed four floors and damaged fifth floor of the modern 62 story First Interstate Bank Building in L. A. , claimed one life, injured approximately 35 occupants and 14 fire personnel, and resulted in property loss of over $50 million. The interior design was found to be a large open area with readily combustible contents that contributed to quick fire growth. The sound-power emergency phone system was also ineffective. Radio communication were overtaxed and disrupted by building’s steel frame. (High-Rise Fires, 2008)

One Meridian Plaza Fire One Meridian Plaza Fire document was one of the most significant high-rise fires in the United States’ history. The fire claimed the lives of three Philadelphia firefighters and gutted eight floors of a 38 story fire resistive building causing an estimated $ 100 million in direct property loss and business interruptions. This fire was a large scale realization of fire risks that have been identified on other similar occasions. The most significant new information from this fire relates to the vulnerability of the systems that were installed to provide electrical power and the support fire protection effort.

In this incident there was an early loss of normal electric power, a failure of the emergency generator and a major problem with the standpipe system, which all contributed to the final outcome. (High-rise Fires, 2008) Rockefeller Center High-Rise Fire On October 10, 1996, an electrical fire in the landmark Rockefeller Center in New York City required a five alarm response by FDNY to control the fire. The damage was cause by five separate fires in various electrical rooms that caused significant disruption to a major television network. At approximately 4 a. m.

on Thursday October 10, 1996 an electrical fire occurred at 30 Rockefeller Center Plaza in New York City. Several fires broke out in five remote locations, filling many areas of the building with smoke. The fires presented a challenge for the New York City fire department because of the varied locations of simultaneous fires and the confusing layout of the building. The Rockefeller Center is actually a complex building that is interconnected. This incident as analyzed by the NFPA has inadequate circuit protection, failure of the building alarm system to transmit the alarm, lack of smoke detection in the areas of the fire.

If the fires have been detected earlier, they probably would have been easier to extinguish. The confusing building layout made the fire fighters to have a difficult time locating the fires. (High-Rise Fires, 2008) The World Trade Center Fire The collapse and fire incidence of New York’s City’s World Trade Center structures following the terrors attacks of September 11, 2001 was the world’s worst building disaster in recorded history killing about 2,800 people. More then 350 fire and emergency responders were among those killed, the largest lost of life for this group in a single incident.

In response to the WTC tragedy, the National Institute Of Standards And Technology conducted a 3-year building and fire safety investigation to study the factors contributing to the probable cause of post impact collapse of the WTC towers (WTC 1 and ) and WTC 7 expanded its research in areas of high priority need such as prevention of progressive collapse, fire resistance and retrofit of structures, and fire resistive coatings for structural steel and is reaching out to the building and fire safety communities to pave the way for timely expedited considerations of recommendations stemming from the investigation.

(NIST, 2008) 9/11 Terrorist Attacks Impact to Building Construction The goal of NIST or National Institute of Standards And Technology was to investigate the building construction, the material used, and the technical conditions that contributed to the outcome of the World Trade Center (WTC) disaster. It will serve as the basis for improvements in the way buildings are designed, constructed, maintained and used. The revision of codes, standards, practices and improved public safety are recommended.

The primary objectives of the NIST-led technical investigation of the WTC disaster are to determine why and how WTC 1 and 2 collapsed following the initial impact of the aircraft and why and how WTC 7 collapsed. Determining the reason why the injuries and fatalities where so high or low depending on the location, including all technical aspects of fire protection, occupant behavior, evacuation, and emergency response. Identify as specifically as possible areas in building and fire codes, standards and practices that are still in use and needed revisions.

Evaluation of the fire performance of conventional and high performance structural materials was conducted. Improved active fire protection systems like sprinklers, standpipes/hoses, fire alarms, and smoke management systems should be enhanced thorough improvements to design, performance and reliability. Improve building evacuation should be improved to include system designs that facilitate safe and rapid egress. Methods of ensuring clear and timely emergency communications to occupants are encourage together with better occupant preparedness for evacuation during emergencies.

Incorporation of appropriate egress technologies was observed. Improved emergency response technologies and procedures should be improved to enable better access to buildings, response operations, emergency communications, and command control in large scale emergencies. Improve procedure and practices are used in the design, construction, maintenance, and operation of buildings. (NIST, 2008) Conclusion Analyzing the factors that cause building fires is necessary to help reduce the number of casualties and loss of property.

There are many organizations responsible in supporting engineers and building construction firms to ensure the safety of their buildings from fire hazards. These include NFPA (National Fire Protection Association), NIST (National Institute of Standard and Technology), ASTM (American Society for Testing and Materials), ICC (International Code Council) and UL (Underwriter’s Laboratories) a product safety testing and certification organization and the Skyscraper Safety Campaign.

Different incidence of high-rise building disasters provides firefighters with knowledge of the extent of damage and how to prevent the disasters to happen again. Safety measures and upgrade of fire safety equipment in building construction should be prioritized. The lessons learned from various building fire cases can provide background knowledge of the factors contributing to fire incidence. The most recent and the worst building fire case is the World Trade Center fires which exposed the vulnerability of public buildings to uncontrolled fires, explosions and other terrorist attacks.

(NIST, 2008) Firefighters and building developers should keep in mind the factors that contribute to success or failure of fire disaster prevention and response. This include basic things like firefighter extinguishment, emergency response, heating and ventilation and air conditioning systems (HVACs), standpipe system, portable radios, building construction and evacuation strategy. These factors contribute to the quality and standard of building construction’s fire safety and prevention.

There are many threats to buildings safety but there are applicable means to reduce the destructive impact of building fire hazards and collapse. Coordination between the government officials, inspectors, fire protection engineers and developers limits the chances for building fires and accident. Buildings safety is achievable by reducing the risks of fire and danger to people’s lives. 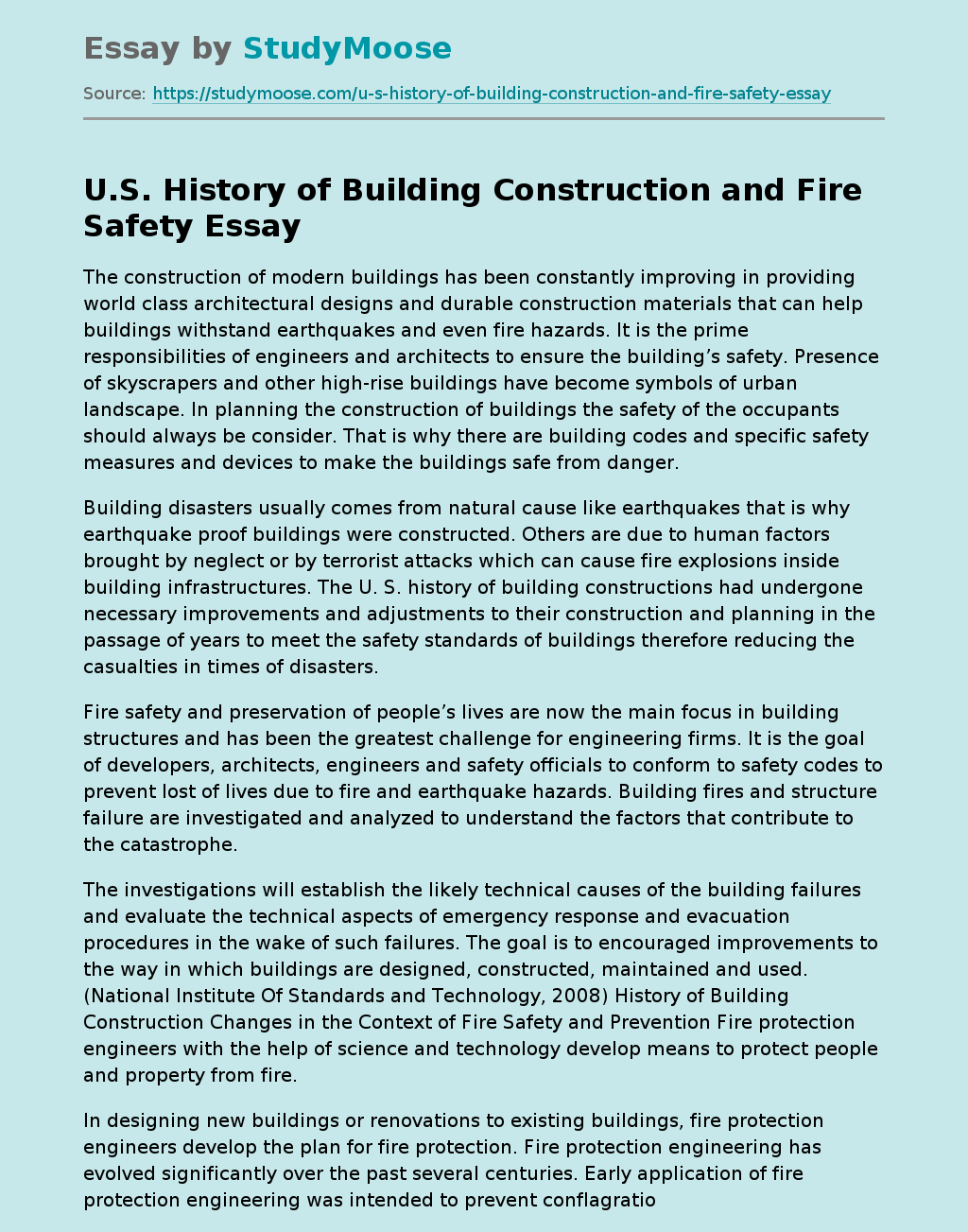