Fidel Castro
led the revolution of Cuba and took control of Cuba in 1959; resented past dictators; made Cuba communist
flexible response
the buildup of conventional troops and weapons to allow a nation to fight a limited war without using nuclear weapons
Peace Corps
(JFK) , volunteers who help third world nations and prevent the spread of communism by getting rid of poverty, Africa, Asia, and Latin America
Alliance for progress
a program in which the United States tried to help Latin American countries overcome poverty and other problems
Bay of Pigs invasion
in 1961, an attempt by Cuban exiles in southern Cuba to overthrow the Cuban socialist government of Fidel Castro; the effort was funded by the U.
Get quality help now
Prof. Finch

S. and was famously disastrous

Cuban missile crisis
Brink-of-war confrontation between the United States and the Soviet Union over the latter’s placement of nuclear-armed missiles in Cuba.
Get to Know The Price Estimate For Your Paper
Topic
Number of pages
Email Invalid email

Nikita Khrushchev
ruled the USSR from 1958-1964; lessened government control of soviet citizens; seeked peaceful coexistence with the West instead of confrontation
hot line
direct telephone link created by Kennedy and Kruschev to allow leaders to communicate instantly in times of crisis
Nuclear Test Ban treaty
A treaty signed by the Soviet Union and the United States, and roughly 100 other countries, that ended the testing of nuclear weapons in the atmosphere.
Berlin Wall crisis
USSR wants western troops to leave and recognize East Germany as communist. Berlin wall built to divide east Berlin and west Berlin. conflict arises when troops do not leave and people cannot go over to west Berlin and be free anymore because guards were posted along the wall
Green Berets
the military branch created by President John Kennedy to be able to wage counter-insurgency campaigns better
U-2 Incident
The incident when an American U-2 spy plane was shot down over the Soviet Union. The U.S. denied the true purpose of the plane at first, but was forced to when the U.S.S.R. produced the living pilot and the largely intact plane to validate their claim of being spied on aerially. The incident worsened East-West relations during the Cold War and was a great embarrassment for the United States.
Cuban Revolution
(1958) A political revolution that removed the United States supported Fugencio Batista from power. The revolution was led by Fidel Castro who became the new leader of Cuba as a communist dictator.
Election of 1960
Brought about the era of political television. Between Kennedy and Nixon. Issues centered around the Cold War and economy. Kennedy argued that the nation faces serious threats from the soviets. Nixon countered that the US was on the right track under the current administration. Kennedy won by a narrow margin.
“duck and cover”
Schoolchildren practiced crawling under their desks and putting their hands over their heads to protect themselves from an atomic bomb attack.
Kennedy’s Inaugural Address
In his inaugural address he called on Americans to “ask not what your country can do for you, ask what you can do for your country.”
Berlin Wall
In 1961, the Soviet Union built a high barrier to seal off their sector of Berlin in order to stop the flow of refugees out of the Soviet zone of Germany. The wall was torn down in 1989. 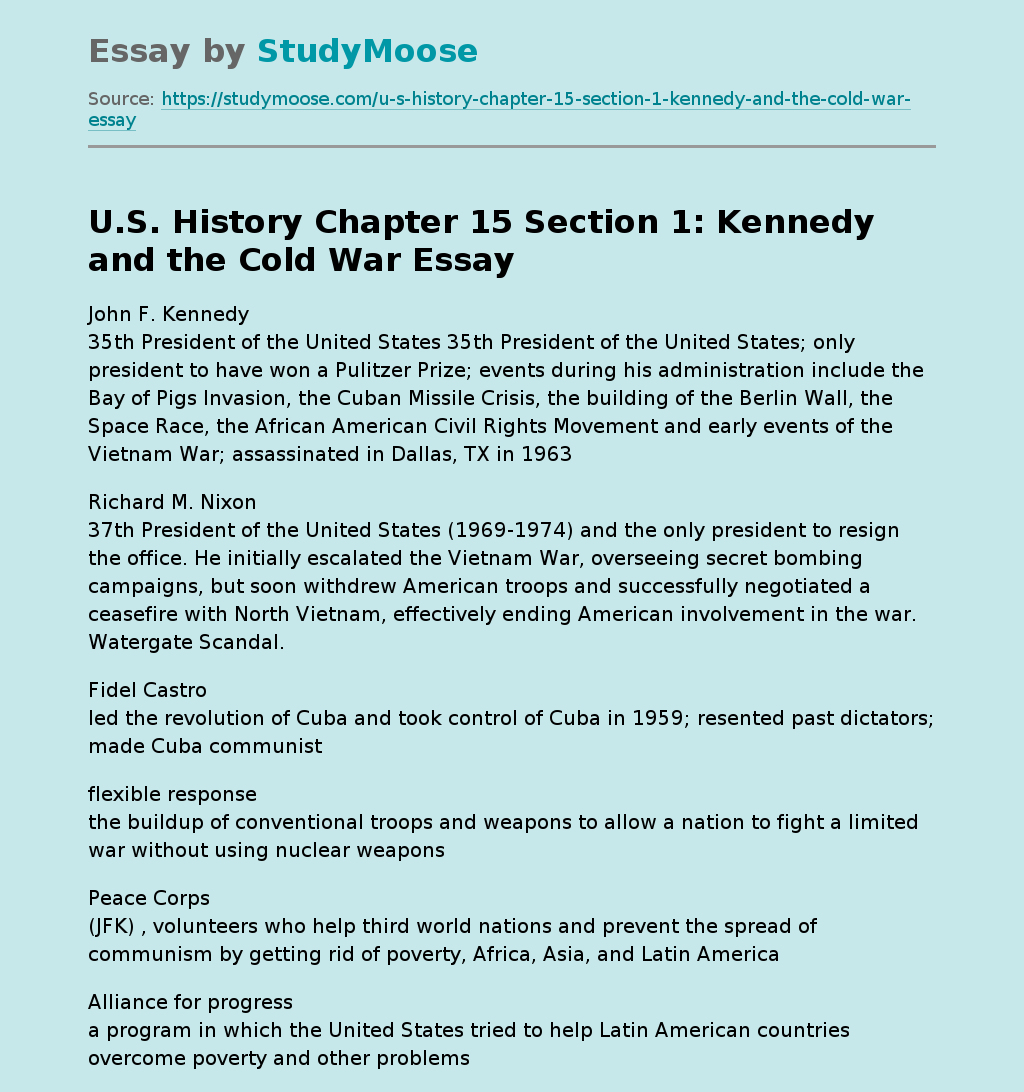