Types of Women in a Novel Sons and Lovers

In the time that Lawrence Wrote women were thought of as being pure and truthful. Women play an important role in this novel as it often makes us wonder do these characters really exist in reality. Lawrence, in his book Sons and Lovers shares with us many different types of women, in this critical analysis of women in Sons and Lovers I will be dealing with three women Mrs. Morel, Miriam and Lily. Mrs. Morel is the most significant of all the women in the novel, seeing that everything revolves around her.

Don't use plagiarized sources. Get your custom essay on
“ Types of Women in a Novel Sons and Lovers ”
Get custom paper
NEW! smart matching with writer

She dislikes her husband because of his persistent consumption of alcohol and the way he abuses her, because of this she focuses all her time and devotion the her two young sons Paul and William.

Her love that she gives he two sons can be interpreted as being incestuous desires for instance when Paul is telling his mother that he does not love Miriam and he continuously kisses her.

She is treating William and Paul as her partners and is very controlling and she insists on having complete control over them for example when Paul is getting too close to Miriam, Mrs. Morel fears that she will lose control over him and that Miriam being the person that she is will change and bring out the best in Paul. She also fears that Paul is going to forget about her and she is going to be left alone with her drunken abusive husband. As a result of this she chases and treats Miriam badly.

The kind of love that is given by Mrs. Morel to her sons is very stifling and there is not much that can come out of such a relationship, because of this Paul is undeveloped and depends on her for everything, he does not know how to be in a relationship and he tells his mother, “I will not be able to love another as long as you live” this line is important to note because it not only shows that Mrs. Morel’s love is damaging her son but it is also a foreshadowing of what is to come later on in the text.

Miriam is another type of woman that Lawrence introduces us to in the novel, she is very shy and soft spoken and slowly falls in love with Paul, she is very spiritual and holy somewhat like a saint/pre-mundane which is spiritual and heavenly. I believe that Miriam will be the salvation of Paul and save him from his mother. She really loves Paul and he is continuously pushing her away because of that stifling attitude of his mother. Miriam has the Power to break Paul away from his mother but does not realize this, or the problem may be that she is not the fighting type and cannot stand up firm to Mrs. Morel.

Paul teaches her French and Algebra but Miriam seems not to understand the algebra and Paul gets extremely annoyed by this he does not understand why she cannot grasp it. He is mean to her because of this and she is extremely clam about the whole situation. Miriam is extremely close to her siblings and takes extremely good care of them and because of this Paul is very angry with her, he does not understand why she does what she does. This is so because Paul was not used to having that amount of love among his siblings.

This conflict can also be interpreted as Paul being jealous of the relationship that Miriam has with her siblings. Lilly, a woman that William falls in love with on his stay in London is portrayed to the readers as a Gold-Digger who does not really care about William; she is only with him because of his money and not because of love. Lilly is very rude towards Anne, William’s sister, she orders Anne around on their visit to William’s house. William tells his mother about Lilly and his mother says to leave her. Shortly after when William dies the Morels never hear from Lilly again, only on this one time that she writes to Mrs. Morel stating that she has moved on.

The Women in this novel Sons and Lovers play a very important role and has extreme effects on many of the characters whether it be the power of control and possessiveness the fact is that women is symbolic to Lawrence in some way.

Types of Women in a Novel Sons and Lovers. (2016, Apr 28). Retrieved from https://studymoose.com/types-of-women-in-a-novel-sons-and-lovers-essay 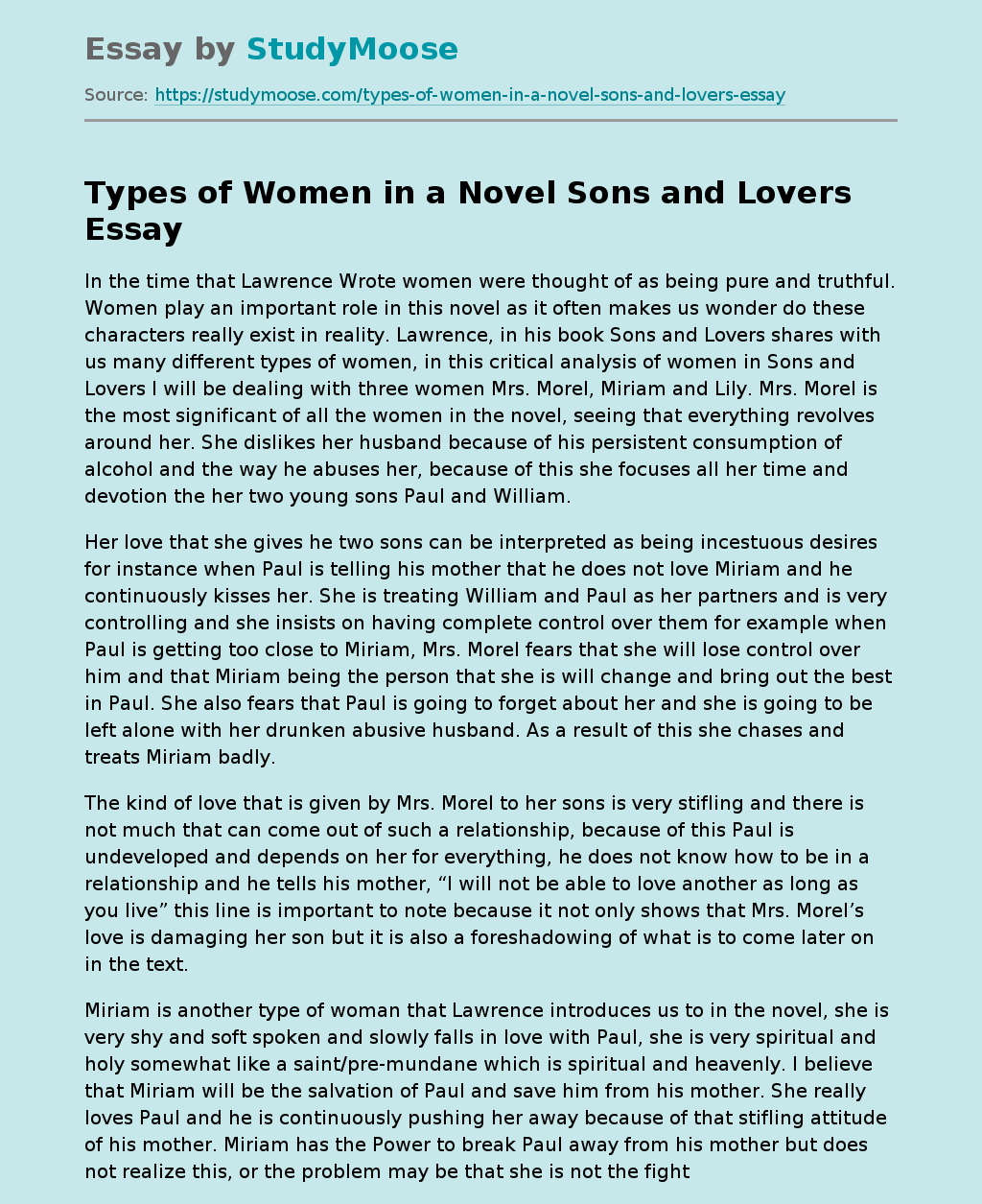