Types of Leadership: Styles and Characteristics

1. Autocratic Style:
Leaders have complete authority and control”His style is ‘Do What I Tell You”.He retains as much power & decision making authority as possible. He makes decisions without reference or consulting to anyone else. It makes high degree of dependency on the leader which may create de-motivation and hostility of staff.

An autocratic leader is the one who commands and expects followership. The leader leads by the ability to withhold or give rewards and punishments.

Turn in your highest-quality paper
Get a qualified writer to help you with
“ Types of Leadership: Styles and Characteristics ”
Get high-quality paper
NEW! AI matching with writer

Managers seek to have the most authority and controls in decision making.

Managers seeks to retain responsibility rather than utilize complete delegation

Managers are less concerned with investing their own leadership development, and prefer to simply work on the task at hand.

Example of Autocratic Leadership:
Adolf Hitler
Hitler was born in 1889 in Braun, Austria. As a child he wanted to be an artist.

As he got older his thoughts soon changed. Hitler’s rise to power began in 1919,that was 1 year after World War 1 had ended. He joined a group of people called the Nazis. He soon became their leader .His dream was to make Germany as powerful as it was before.

Hitler ruled Germany as a dictator from 1933-1940. He turned Germany into a powerful war machine. He provoked WW2 in 1939.Hilter conquered most of Europe before being defeated in 1945.Hitler’s wrath was almost spread worldwide, but luckily it didn’t.

Saddam Hussein was dictator of Iraq from 1979 until 2003, when his regime was overthrown by a United States-led invasion .Saddam, therefore, increasingly portrayed himself as a committed Muslim, in an effort to choose the conservative religious segments of society. Some elements of Sharia law were re-introduced, and the ritual phrase “Allahu Akbar” (“God is great”), in Saddam’s handwriting, was added to the national flag.

Relations between the United States and Iraq remained tense following the Gulf War. The U.S. launched a missile attack aimed at Iraq’s intelligence headquarters in Baghdad 26 June 1993, citing evidence of repeated Iraqi violations of the “no fly zones” imposed after the Gulf War and for incursions into Kuwait.

The sentence was upheld after appeal, and Hussein was executed by hanging in Baghdad on the morning of 30 December 2006.

The democratic leader makes decisions by consulting his team, whilst still maintaining control of the group.

Characteristic of Democratic or Participative Leadership:
1. Manager seeks consultation on all major issues and decisions. 2. Manager effectively delegate tasks to subordinates and give them full control and responsibility for those tasks.
3. Manager welcomes feedback on the results of initiatives and the work environment. 4. Manager encourages others to become leaders and be involved in leadership development.

Example of Democratic or Participative Leadership:
Indira Nooyi – PepsiCo
Indira Nooyi’s career at PepsiCo began in 1994 as senior vice-president of Corporate Strategy and Development and she has been credited with shaping PepsiCo’s current focus on the convenient foods and beverages business, influencing the company’s $ 3.3 billion acquisition of Tropicana, the juice company, in 1998, among other achievements. PepsiCo’s president expressed success with simple ideals, perspicacity and conviction. Indra Nooyi is the truly global in her thinking keeping a wide perspective about the world and has great intellect.

Narayan Murthi – Infosys
Narayana Murthy turned a small software development venture that he had set up with his friends in 1981, into one of the leading companies of the country. Infosys grew rapidly throughout the 1990s. He distributed the company’s profits among the employees through a stock option program and adopted the best corporate governance practice.

The Laissez-Faire technique is usually only appropriate when leading a team of highly motivated and skilled people, who have produced excellent work in the past.

Characteristic of Laissez-faire or Delegative Leadership:
The leadership responsibilities are shared by all & can be very useful in businesses where creative ideas are important.
Is highly motivational, as people have more control over their working life Helps to make coordination decision, but can be time-consuming and lacking in overall direction as it relies on good team work & good interpersonal relations.

Example of Laissez-faire or Delegative Leadership:
Vitthal Kamat – ORCHID HOTEL
Kamat Hotels (India) Limited was incorporated on 21st March, 1986 in the State of Maharashtra by Mr. Vitthal Kamat and his associates with the main object of setting up and running of hotels and related business. The Company obtained the Certificate of Commencement of Business on 31st March, 1986.

William (Bill) H. Gates is chairman of Microsoft Corporation, the worldwide leader in software, services and solutions that help people and businesses realize their full potential. Microsoft had revenues of US$51.12 billion for the fiscal year ending June 2007, and employs more than 78,000 people in 105 countries and regions.

On June 15, 2006, Microsoft announced that effective July 2008 Gates will transition out of a day-to-day role in the company to spend more time on his global health and education work at the Bill & Melinda Gates Foundation.
After July 2008 Gates will continue to serve as Microsoft’s chairman and an advisor on key development projects.

A good leader uses all three styles, depending on what forces are involved between the followers, the leader, and the situation. Some examples include:

Using an autocratic style on a new employee who is just learning the job. The leader is competent and a good coach. The employee is motivated to learn a new skill. The situation is a new environment for the employee.

Using a participative style with a team of workers who know their job. The leader knows the problem, but does not have all the information. The employees know their jobs and want to become part of the team.

Using a delegative style with a worker who knows more about the job than you. You cannot do everything. The employee needs to take ownership of her job. Also, the situation might call for you to be at other places, doing other things.

Using all three: Telling your employees that a procedure is not working correctly and a new one must be established (authoritarian). Asking for their ideas and input on creating a new procedure (participative). Delegating tasks in order to implement the new procedure (delegative).

Types of Leadership: Styles and Characteristics. (2016, Apr 11). Retrieved from https://studymoose.com/types-of-leadership-styles-and-characteristics-essay 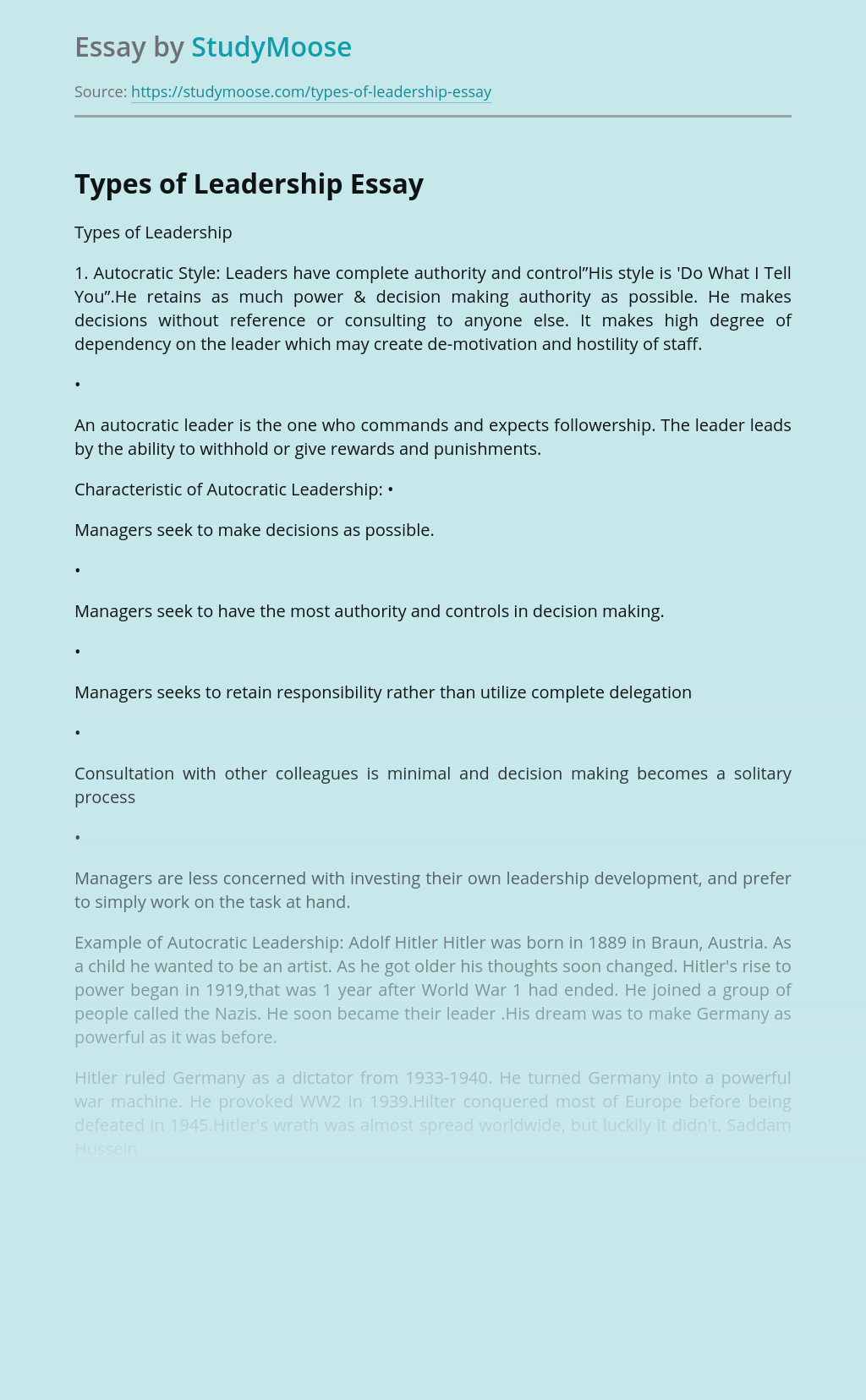 Turn in your highest-quality paper
Get a qualified writer to help you with
“ Types of Leadership: Styles and Characteristics ”
Get high-quality paper
Helping students since 2015
Stay Safe, Stay Original