Types of Appetizers, Sauces and Soups

Appetizers, or hors d’oeuvres, are bite-size or small delicacies served before a meal. Guests and family members can nibble on them while waiting for the main courses. Appetizers are small enough that they whet the appetite more than they satisfy hunger. They come in many types. However, they are often divided into separate categories. These categories have some crossover because many appetizers fit into more than one group.

Canapes are usually small pieces of toast, bread or crackers topped with a savory combination of food.

Don't use plagiarized sources.
Get Your Custom Essay on Types of Appetizers, Sauces and Soups Just from $13,9/Page

To make canapés, decide whether you will be using bread or crackers as a base. If bread, you can either toast it or leave it plain. However, it is usually cut into small, bite-size pieces. The next step is to find a pleasing combination of foods to place on the top of your base. Commonly used toppings are cheese and sausage, cream cheese and cucumber, deviled egg or smoked salmon. There is no limit to the food combinations you can use.

There is an entire category of appetizer that uses vegetables as a base for other foods. Vegetables are either thickly sliced to form a base, or stuffed with fillings. For example, cucumbers can be sliced and then spread with cream cheese and topped with a piece of tomato. Another idea is to fill a pea pod with a tuna or egg filling. These kinds of finger foods are generally very appealing.

You can prepare dips and spreads ahead of time and serve them either hot or cold. They are usually paired with a variety of raw vegetables, bread pieces, crackers or corn chips. The vegetables or other foods are usually dunked into the dip and then eaten. You can also spread the dip onto small pieces of bread or crackers. Recipes for spreads and dips include chutney, salsa, spinach dip, ranch dip and guacamole.

There are many kinds of seafood and meat appetizers. For example, you can use various kinds of chicken wings. You can also serve asparagus spears wrapped in bacon, warm sausage slices, small crab cakes or slices of smoked salmon. Meat and seafood appetizers tend to be filling, so if you are planning to have dinner afterward, serve them in fairly small quantities.

The 5 “Mother” Sauces * Béchamel, the classic white sauce, was named after its inventor, Louis XIV’s steward Louis de Béchamel. The king of all sauces, it is often referred to as a cream sauce because of its appearance and is probably used most frequently in all types of dishes. Made by stirring milk into a butter-flour roux, the thickness of the sauce depends on the proportion of flour and butter to milk. The proportions for a thin sauce would be 1 tablespoon each of butter and flour per 1 cup of milk; a medium sauce would use 2 tablespoons each of butter and flour; a thick sauce, 3 tablespoons each.

Velouté is a stock-based white sauce. It can be made from chicken, veal or fish stock. Enrichments such as egg yolks or cream are sometimes also added.

Espagnole, or brown sauce, is traditionally made of a rich meat stock, a mirepoix of browned vegetables (most often a mixture of diced onion, carrots and celery), a nicely browned roux, herbs and sometimes tomato paste.

Hollandaise and Mayonnaise are two sauces that are made with an emulsion of egg yolks and fat. Hollandaise is made with butter, egg yolks and lemon juice, usually in a double boiler to prevent overheating, and served warm. It is generally used to embellish vegetables, fish and egg dishes, such as the classic Eggs Benedict. Mayonnaise is a thick, creamy dressing that’s an emulsion of vegetable oil, egg yolks, lemon juice or vinegar and seasonings. It is widely used as a spread, a dressing and as a sauce. It’s also used as the base for such mixtures as Tartar Sauce, Thousand Island Dressing, Aïoli, and Remoulade.

Vinagrette is a sauce made of a simple blend of oil, vinegar, salt and pepper (usually 3 parts oil to 1 part vinegar). More elaborate variations can include any combination of spices, herbs, shallots, onions, mustard, etc. It is generally used to dress salad greens and other cold vegetable, meat or fish dishes.

Types of Appetizers, Sauces and Soups. (2016, Oct 09). Retrieved from https://studymoose.com/types-of-appetizers-sauces-and-soups-essay 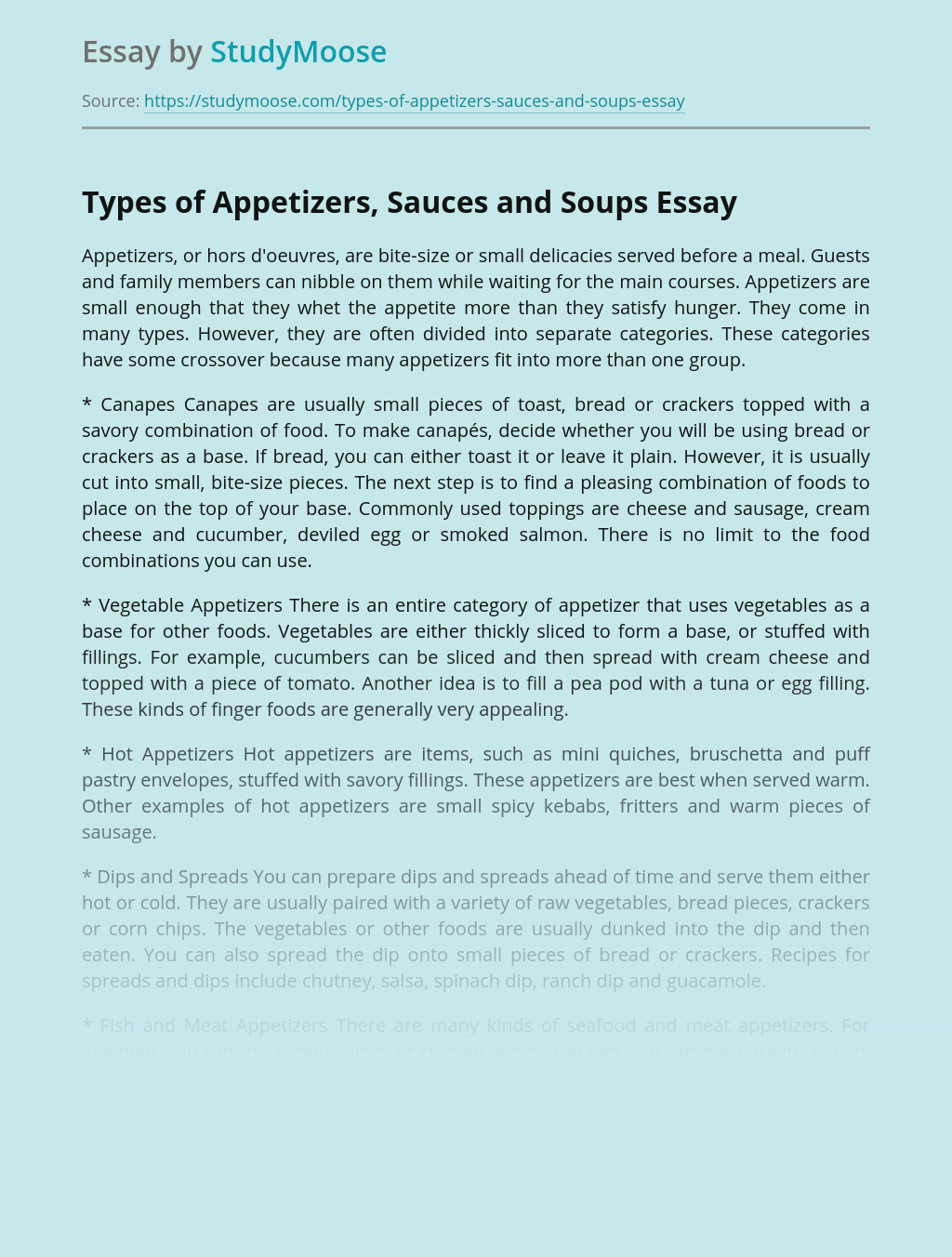 Adulteration of food with toxic chemicals harmful to health has reached an epidemic proportion in Bangladesh. The newspapers have dubbed it as the ‘silent killer’. It is very difficult to find a sector of food industry which is free of adulteration. From raw vegetable and fruits to milk and milk products to fish, meat and...

Abstract The study was conducted to identify and evaluate the consumers’ behavior on exotic foods of the consumers’ in. The descriptive method of research was used in this study. The researcher distributed the questionnaires to four restaurants. Each restaurant has a quota of ten respondents a total of forty respondents for the researcher’s convenience. Convenience-Quota...

1. 1 INTRODUCTION Fast food is generally food or a meal which is pre-prepared, or which can be quickly cooked when you order it. You can buy fast food almost anywhere. Although fast food trend is quite new in Pakistan yet it is growing very fast, this indicate that such type of fast food restaurant...

The importance of sports in child's development

Children need to be active every day. Physical activity promotes growth and causes enhanced physical and emotional health. Today, research shows that the significance of exercise in kids is more powerful than ever. For instance, medical scientists have observed that extremely active kids are less most likely to struggle with high blood pressure, diabetes, cancer...