It has been more than 50 years now that bikes have been ruling the Indian automobile sector. In 1955, the Indian government needed sturdy and reliable motorcycles for its Army and police to patrol the rugged border highways. The first batch of 350cc Bullet – the super bike in India of all times, from the Royal Enfield Company of UK were received and assembled at Chennai. Since then, bikes in India have been flourishing as a two wheelers segment, and Indian bikes gaining on popularity all across the world.

Don't use plagiarized sources. Get your custom essay on
“ Two wheeler Industry in India ”
Get custom paper
NEW! smart matching with writer

Talking of bikes cc, bikes having four-stroke engines are thought to be more fuel efficient motorbikes.

They are the main reason for the growth of motorbikes in India as a segment. Indian bikes market share is about 81. 5% of the total two wheeler market in India. Three-fourth of the total exports in the two wheeler automobile industry is made in the motorcycle segment. Exports are made mainly to South East Asian and SAARC nations. India is the manufacturer of some of the best bikes in the world.

Hero Honda, Kinetic Motor, TVS Motor, LML India are some of iconic bike manufacturers in India. There are cheap motorcycles that comprise the commuter bikes segment, as well luxury bikes like sports bike in India for the new age bikers.

Ever year, a series of latest bike launch keep the sector buzzing. Kawasaki Ninja, Bajaj Pulsar 135 LS, and Honda Unicorn Dazzler are some of the latest motorcycle models that have made news in the recent past. Besides, there are also a number of new bikes in India that are awaiting a launch in the near future 3.

Till 1959, they imported scooters and three-wheelers from Italy and sold them in India. The company got a production license in the year 1959 and fastened a technical collaboration with Italian PIAGGIO in 1960. Bajaj Auto Ltd. is one among India’s top ten companies in terms of market capitalization and among the top five in terms of annual turnover. The company started producing scooters in the year 1961 and followed three-wheelers production in 1962. Its collaboration with Piaggio expired in 1971 and since then, their scooters and three-wheelers are being sold with the brand name “BAJAJ”.

is a result of the joint venture between India’s Hero Group and Japanese Honda Motors Company in the year 1983. This joint venture has not only created the world’s single largest two wheeler company but also one of the most successful joint ventures worldwide. Hero Honda is globally known of being the most fuel-efficient and the largest CBZ selling Indian Motorcycle Company. This is a relationship so harmonious that Hero Honda has managed to achieve indigenization of over 95 percent, a Honda record worldwide. The company is committed to provide the customer with excellence.

A rich background of producing high value products at reasonable prices led the world’s largest manufacturer of motorcycles to collaborate with the world’s largest bicycle manufacturer. During 80s, Hero Honda became the first company in India to prove that it was possible to drive a vehicle without polluting the roads. They company possess three manufacturing units based at Dharuhera, Gurgaon and Haridwar are capable to produce 4. 4 million units per year. They introduced new generation motorcycles that set industry benchmarks for fuel thrift and low emission.

The unique features like fuel conservation, safety riding courses and mobile workshops helped the group reach in the interiors of the country. Well-entrenched in the domestic market, Hero Honda Motors Ltd. turned its attention overseas, and exports have been steadily on the rise. Over the years, the Company has received its share of accolades, including the National Productivity Council’s Award ( 1990-91), and the Economic Times – Harvard Business School Association of India Award, against 200 contenders. The gross sales of Hero Honda by March end’2008 was 33,371,43 Crores.

The founder of the Sundaram Clayton Group, the late T. S. Srinivasan – ‘to design, develop and produce an affordable moped for the Indian family. ‘ This vision was realized in 1980 when TVS 50, India’s first two-seater moped rolled out of the factory at Hosur in Tamil Nadu, Southern India. The company has been known for its ruggedness and reliability. TVS 50 was successful and it has smoothened the way for many successes for TVS Suzuki even before its launch in the market. The TVS 50 XL is especially designed for individuals who want economy fused with sporty looks. Recently new XL Super With a 70 cc high-tech Power Pack is all set to redefine the category of mopeds in the country.

The Suzuki Samurai was launched for the time conscious urban commuter. The Max 100 R was engineered for those who demanded strength and ruggedness. Along with them all, Suzuki Shogun was for those who wanted raw power. TVS Motor has continually worked on innovating the motorcycle segment along with two wheeler range. The Suzuki Shaolin, developed by TVS Suzuki is India’s first 5 speed, 140 cc motorcycle. Another example of the company success is TVS Scooty, a 60 cc Scooterette which keep one step ahead of its time in India. TVS Motor has been coveted 2 IT awards, one of them is bagging the SAP ACE 2008 award for Customer Excellence and the other one is 2008 Symantec South Asia Visionary Award.

Along with this, it is the first company in the world to be honored with The Deming Prize for Total Quality Management. In September 2008, the company has got 19% growth for registering total two wheeler sales of 137,246 units . The company is the third largest two-wheeler manufacturer in India and ranks among the top ten globally. The company was the first in India to launch 2-seater 50cc moped and 100cc Indo-Japanese motorcycles. At present TVS Apache, TVS Victor, TVS Scooty, TVS Centra and TVS Fiero are the popular bikes in Indian market. In all, team TVS has triumphed each and every race and rally in the country from the road to racetrack, with each of the TVS bikes being a winner.

Two wheeler Industry in India. (2017, May 29). Retrieved from https://studymoose.com/two-wheeler-industry-in-india-essay 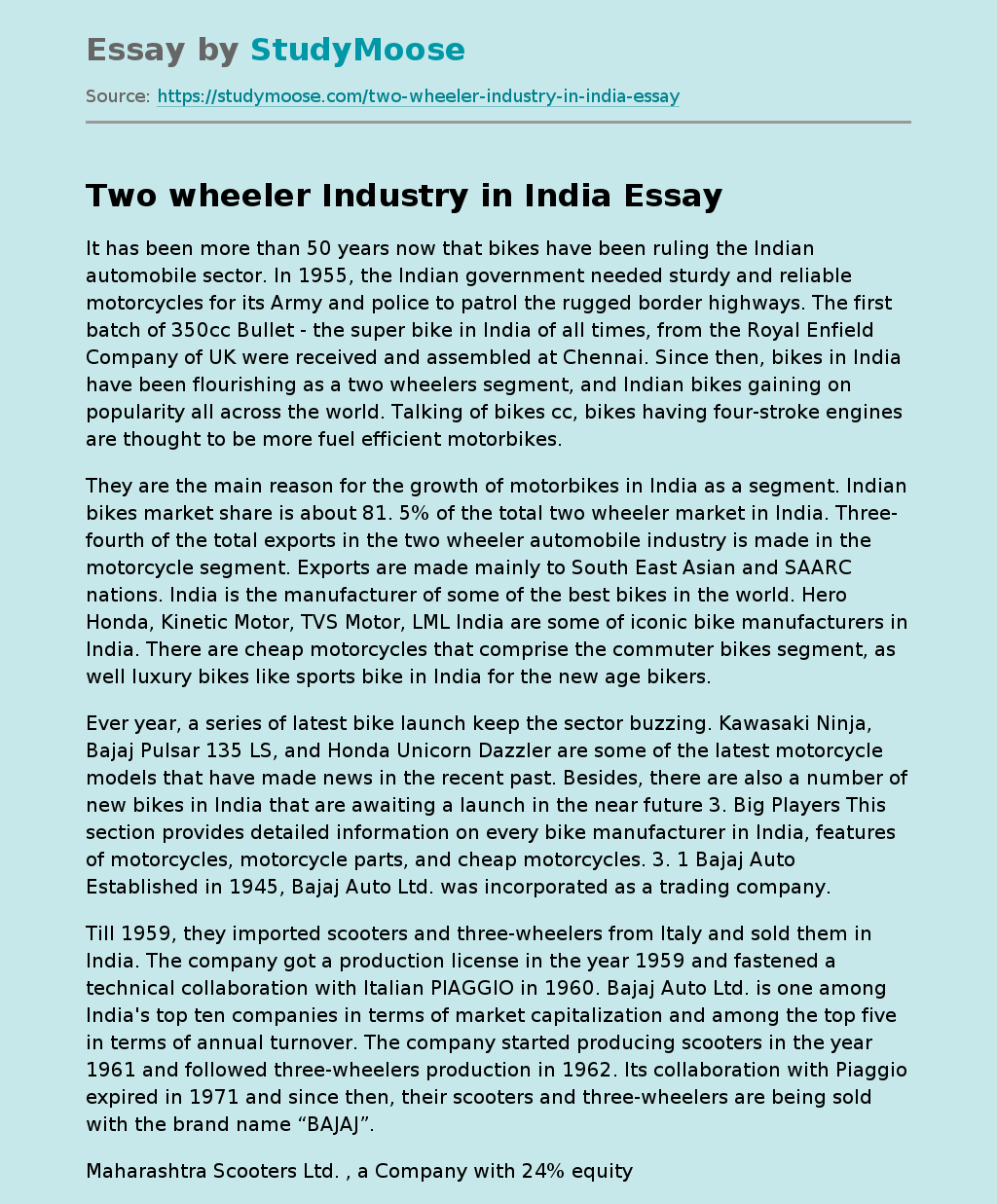