They were both seeking degrees-Mira in child psychology and pre-school education, bharati went on to peruse a degree in creative writing.

Don't use plagiarized sources. Get your custom essay on
“ Two ways to belong to america bharati ”
Get custom paper
NEW! smart matching with writer

After they obtained their degree’s they were to return to India and marry, a man of their fathers choosing. The second part of this plan the two sisters aborted –Mira, after successfully gaining her degree in child psychology and preschool education and Preferring to be set in her ways married a young Indian man pursuing his business administration degree at Wayne’s university.

Bharati while obtaining her degree in creative writing married a fellow American student of Canadian heritage. Both of them then would be successfully married for thirty plus years and still maintain contact with each other; however, the narrator Bharati sees that as the only similarity that they have as immigrants coming from India to America. Bharati being the more outgoing and open-minded sister of the two, choose to welcome as much change as a new continent could offer, obtaining her green card then later her citizenship.

She welcomed the difficulties of marrying a man from a different culture, wanting all the challenges that were accustomed to adapting to the American culture.

She moved around in to different states, and even went to live in husband family’s homeland-Canada. She wanted to set roots in the country she lived in, vote and make a difference in any way that she could. She simply wanted to feel like she belonged. Mira on the other hand, being more of an introvert and a patriot of her county/culture felt it necessary to never involved in American culture and felt contentment with her labor certification.

She stuck to her roots and her ancestral culture, but contributed significant amount of her expertise in child psychology and preschool education to American educational system and nationally has been recognized for her efforts. The Two sisters could not be any more different in their experiences of America. In this time, new laws were being established about the issues of possessing a American citizenship/green card verses just simply obtaining a right to word certification.

This cause Mira to become irritated at the way she felt America was treating its hardworking immigrants, however Bharati always being able to look at both sides of an issue objectively, did not see it that way. she tried to urge her sister to get a green card so that she would still be eligible for benefits that came with being an American citizen/green card holder , she replied she would, just until she was ready to go back to her country she’d change her citizenship back to being a citizen of India.

Bharati then saw her sister in a different light, they certainly was not the same. Where she was passionate about being in a new country her sister preferred to be like an exile, living in a country but not of the country. In conclusion, I agree with both Mira and Bharati I believe that when one has willingly come to a country, one must adapt, however one must always maintain an identity that signifies their background and ancestry…never fully giving in to both but finding a balance that suits you. 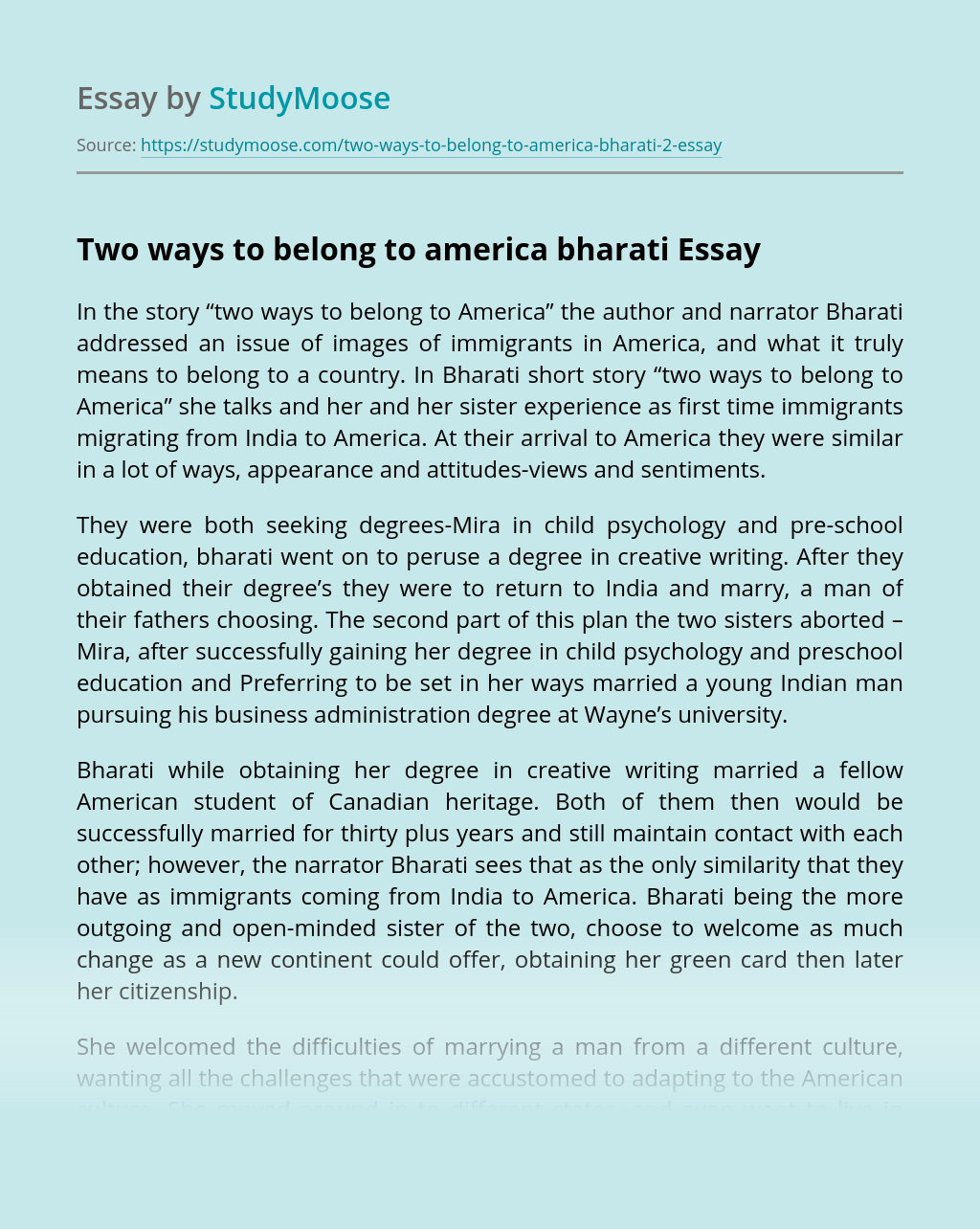