“hello, this is jakob gonzalez. Today i will comment on Two Minue Drill by Mike Lupica. my focua will be to analyze the way the universal theme of dreaming represents Mike Lupica’s view of life as nobody is perfect.The view of life is established by Mike Lupica’s effective use of conflict resoltion, and character development. Pior to my analysis i will provide you an overview of my text.

I will now summarize the main literary features of the novel Two Minute Drill.

Don't use plagiarized sources. Get your custom essay on
“ Two Minue Drill by Mike Lupica ”
Get custom paper
NEW! smart matching with writer

The setting of Two Minute Drill is around fall and one of the main settings would be perry’s field because that’s where scott hangs out with chris and that’s where he really gets him emotions out and doesn’t really focuson anything and th have a great tme with his dog Casey and Chris.

The protagonist of Two Minute Drill is scott perry. Scott perry may be charcterized by the following two traits, shy and self conscious.

the antagonist Jimmy Dolan may be characterized by the following two traits, selfish and greedy.

The main events of this novel are in the beginning Scott was the new kid and kept on getting bullied by Jimmy and after chris came in and told Jimmy to stop.

A couple of weeks later chris saw how good scott was a kicker and wanted to tell everyone but scott was trying hold him back. Also chris finally told scott about how he cant read and totally freaked scott out about it. Finally the last major event would be when scott had to kick a field goal to win he game for the championship on the line and it was actually his first time on the field playing. the climax of Two Minute Drill is when chris finally told scott that he couldn’t read.

The novel concludes with the following major event when they are at the championship game. The internal conflict is resolved when Scott got to get on the field and win the game for his team and chris passed his test and was able to play football. The external conflict is resolved when Scott got his chance to finally et on the field and prove to everyone that they were wrong about him not being a good football player. The resolution of these conflicts and the development of the protagonist over time establish the theme of never giving up. I will now comment on how Mike Lupica utilizes conflict, and resolution to establish a controlling impression and theme.

Understanding the author’s craft in creating resolution to major conflicts in a novel crystallize the reader’s inference of theme.In Two Minute Drill there exist the following theme. The internal conflict is scott wants to get better at football and chris wants to get better at math an language arts so they agree to a deal to help each other out is illustrated in the following quote from the novel, “The deal is, you make me better at football, and i’ll make you better at school.”(78) This conflict occurs further in the novel, “Chris stared at the grade on the front, not changig expression until Mr.Dykes was past him. then chris looked back at scott and pointed at him. chris finally seen his grade, B.”(98). This internal conflict conflict is resolved when scoot helped out chris with his school work and passed Mr.Dykes test so he could play the championship game and chris helped scott with football and making tougher and he got his chance to kick the ball in the championship game.

The following quote provides evidence of the authors resolution,” chris smiled with a cocy quaterback smiled, i told i’d get you better at football”.(180) and scott said “i told you i’d get you better at school”.(180) Mike Lupica crafted a resolution in which the protagonist scott learns that as long as youstick to something and get better at it something good will happen later.such a resolution allows the reader to understand the authors view of never giving up because scott knew that even though he didnt like playing football that the year with jimmy that he knew if he could get through the year maybe the coach will put him in the game to kick.

The external conflict is chris getting hurtin the championship game, and scott having to get to the final points to win the game is illustrated in the following quote from the novel, “Mr.Dolan took off his cap despite the soaking rain, and rubbed his forehead.scott thought the coach looked lost for a moment. then suddenly coach called me out on to the field.(170)”. this conflict occurs further in the novel,”scott planted his left foot, not slipping even a little bit, dropped the ball perfectly in the spot he cleared.brought his right leg through. it cleared the cross bar with a couple of feet to spare(177)”. The external conflict is resloved when scott kicked the ball through the croosbar to win the game for his teammates. The following quote provides evidence of the authors resolution “i’m going to say this for the last, time, and i promised i wont say it again. i couldn’t do it without you(180)”.

Mike Lupica crafted a resolution in whichthe protagonist scott learns that hint at character development and a furthering of the plot. such as a resolution allows the reader to understand the author’s view of never giving up because people will always make you doubt yourself and tell you what you want to achieve is impossible but doesn’t matter what other people think, its about how you can prove them wrong and tell them not everything is possible. Mike Lupica’s resolution to the stated conflict is but one aspect of understanding theme. a reader must recongnize and interpret character development over time to dive deeper into the author’s purpose in communication a view of life.

The theme of never giving up is in part established by the characters actions,thoughts, and words and in their reactions to their repective conflicts. An analysis of the characters behavior allows the changes in the protagonist’s character hint to the author’s statement on life. the protagonist is best characterized by the following traits sy and self consious. For example , the trait of shy is evidence when ” so he tried to not act like he was showing off, even though his hand still shot up more than anybody else’s in sixth grade(2).”This shows that the character posses the trait of shy because heknew that if he liftd his hand all the time then people would call him the nerd s he tried to not be so involved in the class so that no one knew who he is. In addition the trait of self conscious is evidence when “oh i get your one of those guys who doesn’t think kickers are real players(32).

“This shows that the character posses the trait of self conscious because scott began to go into a shell and try to protect himself because he knew that chris was going to tell everyone about how he could kick the football.these triats, in part determine how the character will resolve his conflict. Internal conflict of scott wanting to get better at footballand chris wanting to get better at math and language arts so they agree to a deal to help each other outis resolved when scott takes te following action by tutoring chris at his house and then go in the backyard and chris would help scott become a better football player so he coulld kick a field goal in the game.

The external conflict of scott wanting to get on the field and play is resolved when chris takes the following action to tell Mr.Dolan to put scott in because he knew that he could win the game for them.The conflict is resolved because he gets to kick the winning field goal for his teammates. The author’s ability to craft a protagonist’s development through conflict is an important aspect in a readers understaning of the main character. A reader wishes to know how thier character will handle adverse situations, and how they will be affected by their reaction to the situation.This is a quality that engages a reader and forwards the plot development. when a reader assasses the manner in which a character resolves his conflict through actions, thoughts, or words theme is evident

As i have commented on my reading of Two Minute Drill by Mike Lupica. i have discussed the theme of never giving up and how this theme is understood through the analysis of scott handling oof his internal conflict and finally gettinhis opportunity to show everyone wrong and the external conflict on how scott got to kick the winning field goal and won the championship titl for his team thus learning the lesson of you dont want to be the person that is weak and gives up. As long as you keep on practicing something good will happen in return. my analysis of these aspects of my independent reading novel allows me to infer the theme of never giving up. Thank you for your time and consideration of my oral commentary. 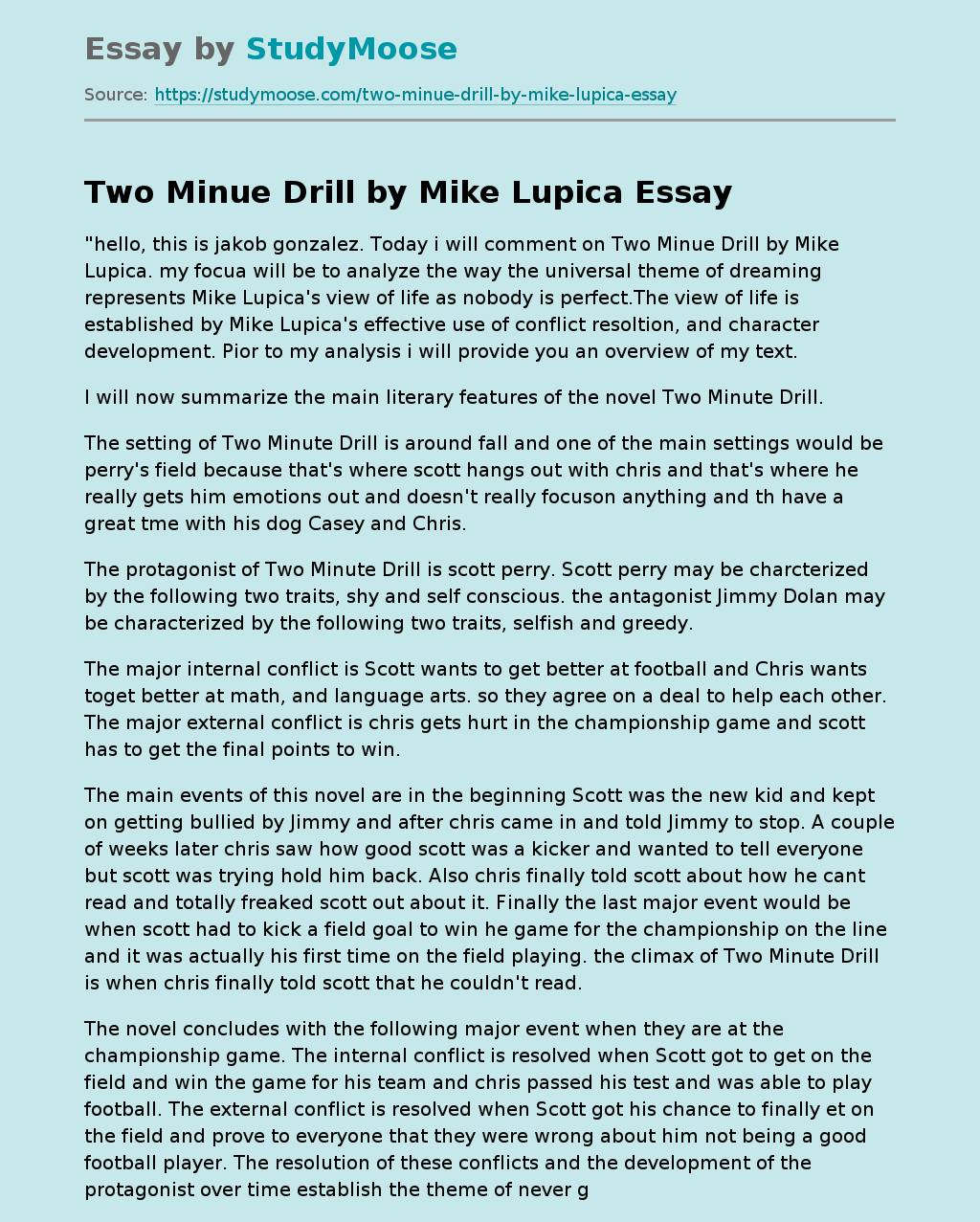