Chief Complaint: 8-year-old girl admitted for severe second- and third-degree burns following her rescue from a burning house. History: Angela Creighton, an 8-year-old white female, was transported by ambulance to the emergency room after being rescued from her burning house. She was asleep at night when a spark from the family fireplace started a fire, leaving her trapped in her bedroom. By the time the fire rescue squad arrived, she had suffered severe burns and excessive smoke inhalation. In the emergency room, Angela was unconscious.

Turn in your highest-quality paper
Get a qualified writer to help you with
“ Two case studies on the integumentary system ”
Get high-quality paper
NEW! AI matching with writer

Her vital signs were quite unstable: blood pressure = 55 / 35; heart rate = 210 beats / min.; and respiratory rate = 40 breaths / min. She was quickly deteriorating from circulatory failure. Two IVs were inserted and fluids were administered through each. Her vital signs stabilized and she was transported to the pediatric intensive care unit (ICU). Angela regained consciousness the following morning, surprisingly complaining of only minor pain over her trunk.

Following debridement of her burns and application of a broad-spectrum, topical antibiotic, a plastic epidermal graft was applied over the burned areas. Despite treatment with a broad-spectrum antibiotic, she developed a systemic staphylococcal infection, necessitating a switch to a different antibiotic.

Angela began a long, slow recovery. Her position in bed had to be changed every 2 hours to prevent the formation of decubitus ulcers (i.e. bedsores). She lost 9 pounds over the next 3 weeks, despite nasogastric tube feeding of 5000 calories (“Kcals”) per day.

After 9 weeks, sheets of cultured epidermal cells were grafted to her regenerating dermal layer. By the 15th week of her hospitalization, her epidermal graft was complete, and she was back on solid foods, her antibiotics were discontinued, and she was discharged from the hospital with a rehabilitation plan for both physical and occupational therapy at home, as well as twice-weekly visits by a nurse. Questions:

The 3 layers of the skin include the epidermis, dermis, and hypodermis. In healthy skin, the epidermis is the skin layer that is seen, because it is the superficial layer, and it also acts as a protective barrier to keep substances out. The epidermis is scattered with pores and shafts that contain hairs, and also holds melanin. The dermis is the middle layer of skin. The Dermis is the layer that holds all the blood vessels, nerves, hair follicles, collagen and sweat glands. The inner layer of skin is the hypodermis. The hypodermis is where fatty deposits and collagen are found, which insulate our bodies and make sure that we stay warm.

2. Briefly describe the extent of damage seen in first-degree burns, second-degree burns, and third-degree burns. First-degree burns are burns where the damage is only amoung the epidermal layer. These burns cause redness, swelling, and pain in the involved area. After the burn is healed the damaged skin usually sheds off. This burn isn’t long lasting, and the main burn I can think of that is a good example is a slight sun burn, although some sunburns are worse. Second-degree burns damage the epidermis and the upper layer of the dermis. This burn usually causes blisters that eventually pop and cause horrible pain when popped. This burn typically lasts longer than first degree burns. Once my brother had a second-degree burn from a sun burn, and I had this type of burn from pinching my neck in a straightner. Third-degree burns are the most severe burn there is. These are burns damage all three layers of the skin. The main example is any way of being under flames (like a house fire). There is major scarring involved and possibly skin grafting.

3. Why was this girl relatively pain-free when she woke up? When Angela woke up, her burn marks may feel like they are numb because some nerves in the dermal layers may have been damaged. Where pain nerve endings are still present in the skin around all the burns may feel disturbed or painful because there are still some nerves in which are present.

4. Explain why this patient’s blood pressure was so low and her heart rate so high upon arrival at the emergency room. Why was it important to immediately administer intravenous fluids to this girl? This patient has lost the water-tight, protective covering over a large percentage of her body surface area due to third-degree burns across her body. The inflammatory response in her condition in the area of the burn causes blood vessels to leak blood into surrounding tissues. So, Angelas blood levels are significantly low. Then, her heart rate increases trying to boost up her blood volume in her body. Fluids are necessary for her body to help regulate itself.

5. Do bacteria normally colonize healthy skin? What is a “broad-spectrum” antibiotic, and why did she need it?

The skin is normally colonized with bacteria, but not bad bacteria. Bacteria are everywhere. On intact skin, these bacteria cause no problem and can possibly protect us from the bad bacteria. In damaged skin, these normally harmless bacteria can cause severe blood-borne infections. For this reason, broad-spectrum antibiotics are given both typically over the skin and by intravenous injection. Angela needed these antibiotics to fight off the bacteria getting in her body due to the third-degree burns.

6. Describe the series of events that occur in skin that is healing. (Hint: This process is similar to healing of any wound.)

Treatment of a third-degree burn requires the debridement of the burned skin and administration of topical antibiotics. The burnt skin is then washed under a jet of water. After that, to minimize fluid loss and the risk of infection, cadaveric skin, pig skin, or a human amniotic membrane is temporarily placed over the debrided area if a skin graft is even needed. As the skin continues to heal, whether grafted or not,, healthy epidermis can be taken and grown in labs to use in the burned area. After attached to the old epidermis, the blood vessels grow into the new epidermis and form a barrier. There are a lot of scarring, and “never returned nerves” in this process, but at least after healing, it reduces the amount of bacteria being welcomed into the body. 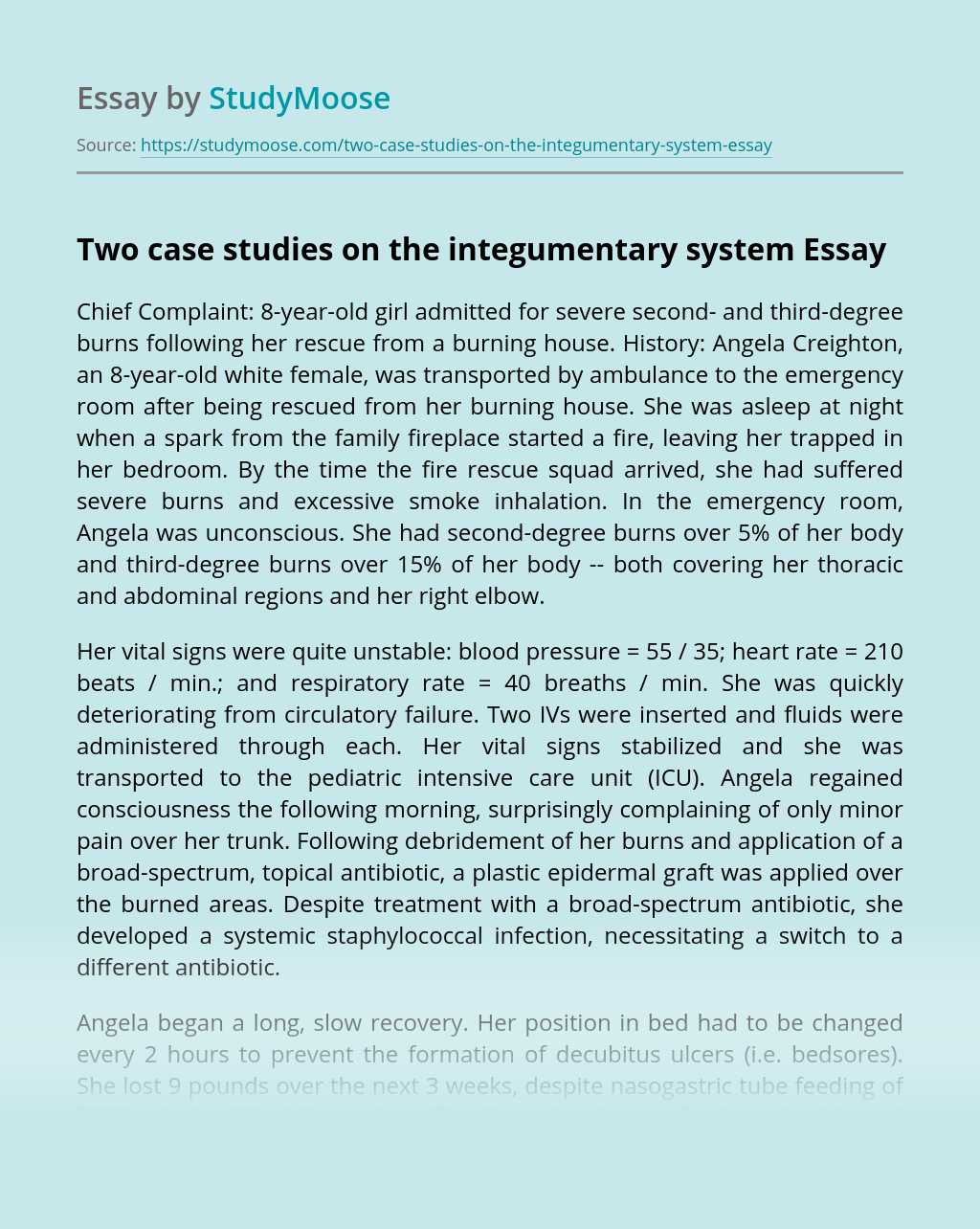 Turn in your highest-quality paper
Get a qualified writer to help you with
“ Two case studies on the integumentary system ”
Get high-quality paper
Helping students since 2015
Stay Safe, Stay Original