Twenty Love Poems and a Song of Despair by Pablo Neruda

“Twenty Love Poems and a song of Despair” is written by the chilean poet Pablo Neruda. He wrote his collection of poems when he was a twenty-year-old. My main themes are the imbalance of love, the role of the song of Despair and the change of love during one one or more poems of this collection. I also picked out some special lines which I think are important to describe what the author wants to say through his poems.

I lots of the poems you can notice the imbalance of love.

Don't use plagiarized sources. Get your custom essay on
“ Twenty Love Poems and a Song of Despair by Pablo Neruda ”
Get custom paper
NEW! smart matching with writer

The amount of love is not equal and one person loves the other more. In nearly no poem of this collection do both persons love each other the same strength. I think the reason why there is never equality is that basically the poet wants to show that even in real life there is never equality of love between two humans. He uses imbalance of love in most of the poems, in some it is difficult to understand, but in others not.

Especially in poem 20:“Tonight I Can Write” it is pretty obvious. In the second line of the 4th paragraph he writes:“I loved her, sometimes she loved me too”.

The paragraph after the next one is written:”She loved me, sometimes I loved her too” That shows that first he loved her more but later his love for her got weaker and her love for him stronger.“Tonight I can write the saddest lines” is another line of this poem.

It shows the love in this poem is sad. They can´t find a point where there feelings are pretty much the same about each other.

When we read this poem we also can find the change of love. There are a few lines where we can notice that the feelings about the other person changes. Something happened in the lines and the love someone is feeling for another human changes. It gets stronger, weaker or even starts, like in the first poem. I think Pablo Neruda is trying to say that feelings never stay the same for a long or a short time and are a continually influx. For example the first thing of the first poem is:”Body of a woman” Later in the last paragraph there is written:”Body of my woman”.

So there is a change of love between these lines. In the second paragraph her writes:”To survive myself I forged you like a weapon” which basically says that he only used her at the beginning. Later in the first line of the third paragraph he writes:” But the hour of vengeance falls and I love you” which shows that he loves her now. So in these two lines he fell in love with her and stopped only using her. I think the line where he says:” I love you” is the point he realizes that his feelings got stronger for her than before and she is more important to him then in the beginning.

I think the reason why the song of Despair is in the end and not called the 21th poem is because it is actually not a real part of the collection. It is about the memories of the love and the relationship and his thoughts about it. I think it should help him to handle his feelings. Especially in the first line of the first paragraph:”The memory of you emerges from the night around me” shows he tries to process his feelings in the song of Despair.

We also can see the change of love during the whole collection. In the first poem he starts to love her around the line:” I love you” and in the 20th poem the lines:” I loved her, sometimes she loved me too” and “She loved me, sometimes I loved her too” he stopped loving her. He uses past tense which shows that the love is over instead of present tense like in the first poem. I think this change of tenses is really important. It represents the beginning and the end of the love. So somewhere between the first and the last poem (except the song of Despair) they stopped loving each other. It´s hard to say where exactly the point is it changes because it is a continually influx.

Twenty Love Poems and a Song of Despair by Pablo Neruda. (2017, Feb 16). Retrieved from http://studymoose.com/twenty-love-poems-and-a-song-of-despair-by-pablo-neruda-essay 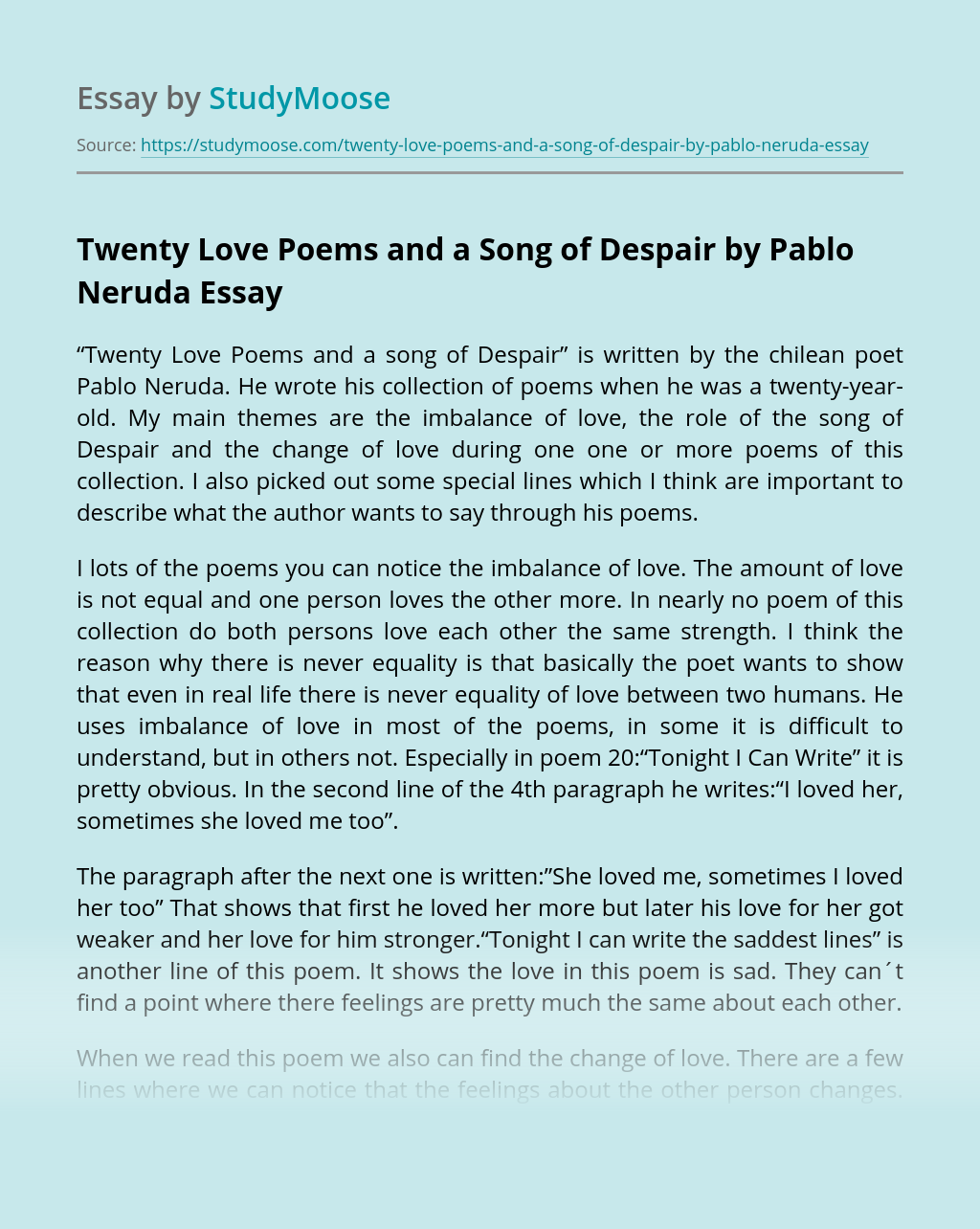