How does Twain deal with the issue of Jim's freedom?

Mark Twain or Samuel Langhorne Clemens was born in the south of America in 1835. The south of America was, at this time pro slavery. As such one would expect a biased and slanted view on one of the main themes of the book Huckleberry Finn – race. However close analysis reveals otherwise. The issue I will be looking at is that of Jim’s freedom and the way in which Twain shows that he possibly does not take the expected side on the subject.

Don't use plagiarized sources. Get your custom essay on
“ How does Twain deal with the issue of Jim’s freedom? ”
Get custom paper
NEW! smart matching with writer

Though many are under the impression that the American civil war was caused by the rift between the country over the issue of slavery, the truth is that is was not the main reason… ut was one of the many causes. It is however very important in Huck Finn.

Having lived in the south he would have been surrounded by a society that treats black people as property. They had no rights, no freedom and spent most of, if not all their lives in the servitude of rich white people who would treat them little worse than animals – starving and beating them.

They were bound by rules, the breaking of which would lead to at the least severe beating and more often that not, death. One of the offences punishable by the latter was that of running away from the master who bought you and legally owned you.

This is why it is interesting to see that Twain is not out rightly pro slavery but in fact gives nothing away about his views on Jim’s freedom.

He uses a technique very skilfully to show the two sides of the nature of society and the nature of man. The technique is the use of irony which he has mastered to a stage at which he can show his views on the issue of freedom and society without actually making any statements. It is this device that he uses to show his views on slavery… or more accurately he doesn’t.

When you first encounter Jim in the episode where Tom Sawyer and Huck are crawling through the bushes and Jim spots them, he stays looking for them till he falls asleep. This section ends with him falling asleep and being tricked into believing that he has been the subject of witchcraft. Through this, Twain gives us a first impression that Jim is a person of little education who is superstitious, gullible and slow witted. This is an impression that will be dispelled as Twain starts to use irony to change our opinions. This is the kind of view of blacks that was taken by the people of the so called ‘civilised society’ that Jim serves.

As it seems so far, Twain is proslavery and has a low view of blacks. Our first proof that Jim may have something more to him than has so far been credited to him is when on page 100 he makes the following statement: “Yes- en I’s rich now, come to look at it. I owns mysef, en I’s wuth eight hund’d dollars. I wisht I had de money, I wouldn’ want no mo” This example of dramatic irony shows us that Twain is introducing some sort of quality to Jim that has yet not been shown. It is an example of Jim’s logic showing through, which although flawed is there and makes him appear much more than just a ‘nigger’.

The next example is the conversation between Huck and Jim about the French on pages135-136. Whilst Huck has the supposed education and Jim is supposed to be the uneducated one, Jim comes out on top. Huck explains but Jim will not listen but instead comes up with an answer to which Huck cannot argue. In this situation Jim seems to be the more knowledgeable and Huck the one who is learning as a pose to the real situation which existed at the time which was the complete opposite. There Is a significance in Jim’s answer too. He starts his argument with the sentence: “Is a cat a man? this is ironic because that is exactly how Jim as a man is treated… like an animal.

This is the first main instance of Twain showing that Jim has depth to him and is intelligent in a way which Huck is not. Twain is almost saying that black people are in humans and not animals and can cope equally well in life. An even more revealing situation occurs after Huck tries to trick Jim into thinking that he’s dead. He manages to persuade Jim to believe that he had never left the raft and he had dreamed the whole episode… Jim agrees and makes a theory based on superstition as to what the dream meant.

Again, this makes us think Jim is gullible and dim. Huck meanwhile looks quite clever having managed to make up an elaborate lie and trick Jim. It seems to be a repeat of the witchcraft section at the start of the book, but Twain turns this situation on it’s head and reverses is. This is a clever trick and shows how Jim as a character is developing. He seems genuinely upset that Huck was dead and when he finds out he was the subject of a trick he is hurt: page 143 ” en went to sleep, my heart wuz most broke bekase you wuz los’ en I didn’k’yer no mo what become er me en de raf.

En when I wake up en fine you back again, all safe en soun’ de tears come en I could a got down on my knees en kiss yo’ foot I’s so thankful. En all you wuz think’ ’bout wuz how you make a fool of ole Jim wid a lie. ” With this speech the irony appears… the one who was supposed to be uneducated and worthless was worried sick about Huck much in the way I parent would worry about a child and the one who is supposed to be ‘civilised’ has played a cruel and importantly childish joke on the other. Asking yourself who is the more mature reveals that Jim is the one who is acting how Huck should be.

It shows that Jim is much more compassionate and loyal, features that we have not seen in him outstanding. Huck however look the childish one, a cheap trick on a trusting friend. It is here that Twain really makes clear the point that a person is deeper than they look. He again uses irony in the fact that Huck has been brought up with the morals of society at the time which are at the end of the day, corrupt, unfair and very far removed from the morals of modern times, which ironically, Jim is endowed with – trust, loyalty and compassion.

It is here that you begin to get an idea of what Twain thinks of the issue of Jim’s freedom. He started by showing that Jim was gullible and made him out to be stupid… gradually through the aid of scenarios like the French language conversation and the trick Huck plays on him he develops his character and brings out the qualities which would today be seen as commendable. He has given today’s morals to a character who would be considered as nothing to Huck’s society and has given societies morals to a boy who would be considered immoral nowadays.

He is confusing the reader with the past and the present and this leaves the reader in some doubt as to how he feels about slavery and Jim’s freedom. He neither confirms nor denies that he is pro slavery but he seems to be hinting that he realises that his societies morals have gone wrong somewhere. The next occurrence takes place at the start of chapter 16 when Huck and Jim are approaching Cairo. After hearing that Jim will attempt to buy or steal his children in the future, Huck decides that he will do what would be most normal in society and turn him in.

He sets out on the raft with the intentions of giving Jim up. Twain here shows what happens when the two moralities clash. As Huck leaves Jim shouts after him: “Dah you goes, de ole true Huck; de only white genlman dat ever kep’ his promise to ole Jim” This is evidence of his qualities coming out – gratitude and trust; he trusts Huck totally and believes in him. It is here that Huck encounters a problem in that he can’t bring himself to turn Jim in after he says that. He lies to the men on the skif to protect Jim and in this, shows himself to be free of societies grip.

He has a dilemma ; he can protect the friend who trusts him and betray his society or he can do what is seen to be right and turn him in. After he has lied to the men Twain introduces a very important speech that Huck makes to himself. He thinks that what he has done is wrong, when in fact he has done right… this shows that despite having being brought up with their morals, when it comes to it he is more humane than the rest of them and is an outcast from society, which he incidentally is. In conclusion, it appears that Twain never really outrightly states his view on Jim’s freedom.

In some respects he writes as if Jim shouldn’t be free and is a piece of property, but all the time develops him and turns him into the kind of character that is often seen as a hero in literature… his use of irony to constantly confuses the reader as to what is wrong and what is right, and confused the characters even more it is his main tool in dealing with Jim himself and his freedom. From what we have seen so far, Twain remains non committal as to what he thinks but I would say he is leaning towards sympathy for Jim

How does Twain deal with the issue of Jim's freedom?. (2020, Jun 02). Retrieved from https://studymoose.com/twain-deal-issue-jims-freedom-new-essay?post 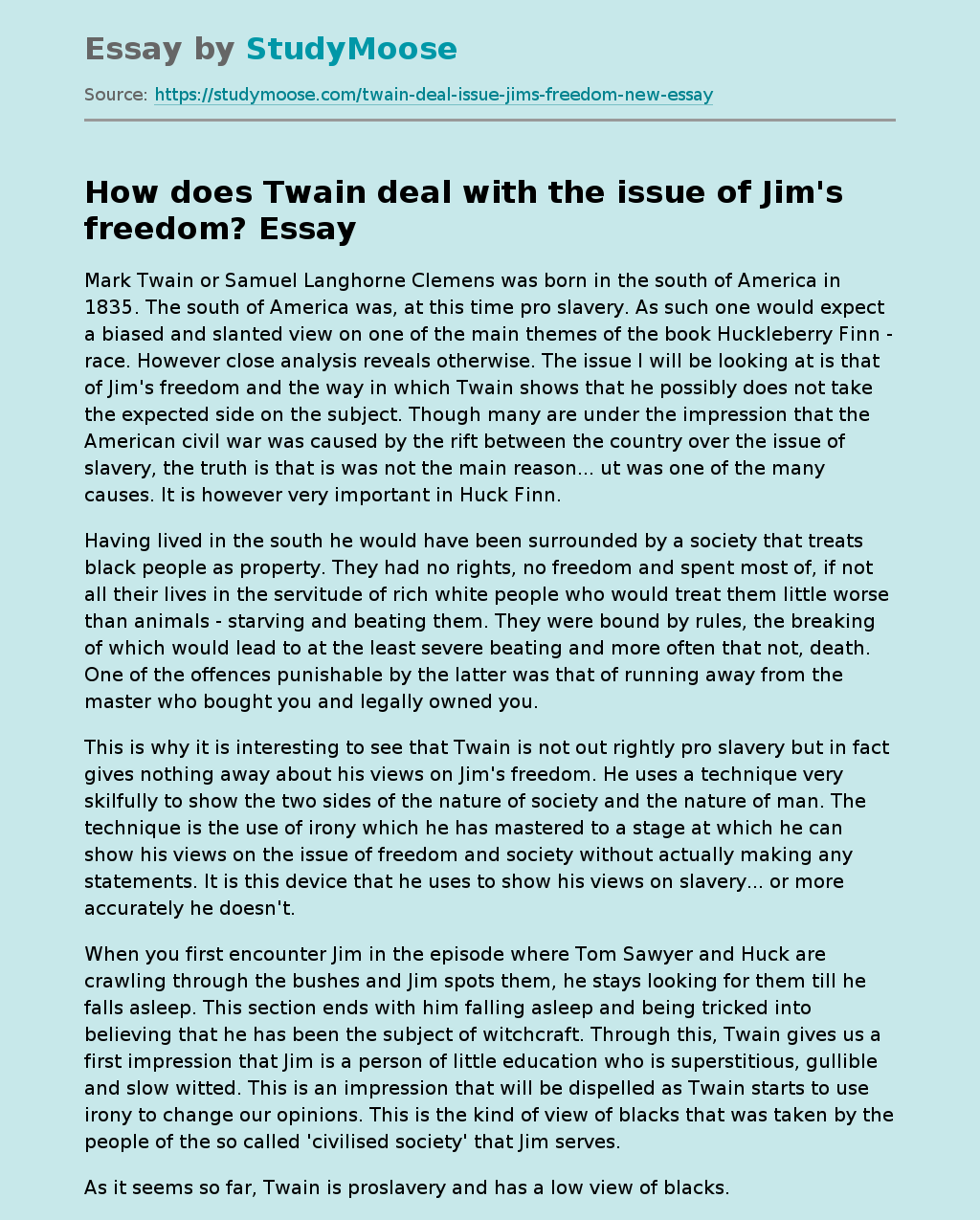