TS Eliot's "The Burial of the Dead"

The passivity of the people residing in the Wasteland is shown through light imagery, which in turn brings out the decay present all around.

Don't use plagiarized sources. Get your custom essay on
“ TS Eliot’s “The Burial of the Dead” ”
Get custom paper
NEW! smart matching with writer

There is a lot of usage of different aspects of the “sunlight” and “shadows”, and little anecdotes provide a detailed account of the type of decay in the Wasteland.

The first mention of light is in an indirect manner, juxtaposing April as “the cruelest month”. April, a time where spring is at its peak and is blooming with light, nature, color and fertility is ironically portrayed as a cruel month, because of its ability to mix “memory with desire”.

The rejuvenation and new beginning in the season is paralleled to the change in the mental state of the people of the Wasteland. It is spring that invokes memories of the people of the Wasteland, and “stirring” desire, something they do not want, as they think it is cruel. The action verb “stirring” is a slow trigger to their minds, but as they do not show much movement, both mentally and physically, it shows their passivity as people.

Instead, they show preference to the darkness and chill of the winter, which ironically kept them warmer than spring did. There is an imagery of hibernation depicted by the transferred epithet, “forgetful snow”, because of the snow’s ability to wash their memories out, contrasting the rain’s ability to invoke memories. The snow makes them feel comfortable, and the readers understand that the people of the Wasteland want only physical comfort, emphasized by “dried tubers”, which only gives them slight physical nourishment, and none mentally. This shows the extent at which the people of the Wasteland have decayed mentally, until the point at which they only care about their physical comfort.

Whenever there is a “shower of rain” or some “sunlight”, the people of the Wasteland move towards shelters such as the “colonnade” or the “Hofgarten”. It is as if all the people ever do is move away from things that might wake them up, so that they wouldn’t have to do anything at all. The sunlight, being full of light or radiance, like spring, has the power to jolt them out of their passivity, the same way “summer surprised” them. But even in the absence of light, they seek shelter, to avoid the awakening powers of cold water splashing on their faces, giving the readers an imagery of splashing water to wake a sleepy person from a deep slumber.

The swift changes in the climate, from dark to light is a technique employed by Eliot to show the different ways people can keep their physical states safe. The sun and the rain are metaphors for the trigger to the mental state of a being, kind of like an alarm clock, but the constant dousing of the trigger through means of physical comfort brings out a conflict, between man and nature. At this point, it is evident that the people of the Wasteland are most comfortable with only two elements of nature, darkness and ice. The snow and the darkness is symbolic of the nature of the people in the Wasteland, as it is frigid and cold, which is parallel to the selfish and materialistic nature of them. Marie’s “staying at the archduke’s” is proof to this, as she is selfishly spending her time in vacation during the post-war era. The seasonal imagery used here, brings out the theme of materialism.

Moral decay is illustrated in a more effective manner in the second stanza, with several mentions of the result of the sun’s rays. The sun is a contrasting element in the “stony rubbish”, but all traces of its radiance and hope is eliminated by the harsh word “beats”. The sun’s rays, although hardly felt, are ironically beating the people there. The sun’s effect dries up water and life, producing “dead trees” and “dry stone”. Both of them are metaphors for the human mind as they are symbols of life and freshness.

The mind is filled with thoughts, flowing continuously like water, and it’s also like a tree, with different ideas producing other ideas, like the branches of a tree. But the fact that there is only a “dead tree” and “no water” shows how the sun withers their minds up completely, the same way it dries up the sources of life. This makes the people of the Wasteland passive, like stones, and unable to take any action for themselves. The extent of the decay is so much and so painful to the people that they would go “in under the shadow of the red rock”, to provide them relief from the pained beats of the sun on their back.

Shadows are created by the sun, like shelters created to provide protection from something. The “red rock” is a biblical allusion to Jesus, and the people of the Wasteland seek sanctuary in the “shadow of the red rock”, not because they want help and are sorry, but it’s because of their need to protect themselves. Ironically, as they try to protect their minds from further rotting, they are in fact protecting their bodies from damage, portraying the materialistic race the people live in.

Lines 28 and 29 are filled with light imagery, created by the man either facing, or turning his back towards the sun. When a “shadow at morning” strides behind you, it is a metaphor for youth, as the path in front of you is clear and the fear of death, created by the dark shadow is pushed back. This time is youth, because the path is clear to do anything at all, and freedom is imparted on one to do his own bidding, without the fear of dying at all. The word “striding” establishes an image of something taking long steps, and this illustrates death striding behind a person, showing how it is still far off.

But in the evening the shadow is “rising to meet you”, and evening is the metaphor for old age, where the path is now crowded with shadows of death, ready to take you away. This light imagery is used to accentuate the theme of ordeals, and shows the suffering of the people of the Wasteland. They are dead mentally, and show no effort to recover, although there is a constant provocation for them to wake up. (“spring rain”, “sunshine”, “sled”) In a way, the people are making no effort to choose the path of light, but instead are like the old people facing death, almost as if they wished for it. Their passivity is the main reason for their mental decay, as well as their selfish natures.

Through all this light imagery, the readers can focus on the death and decay that is so abundant, and there is a contrast in that statement too, because of the hopeful nature of light. The passivity of the Wasteland contributes to the deterioration of spiritual values, as there is no effort made to survive again.

TS Eliot's "The Burial of the Dead". (2017, Nov 13). Retrieved from https://studymoose.com/ts-eliots-the-burial-of-the-dead-essay 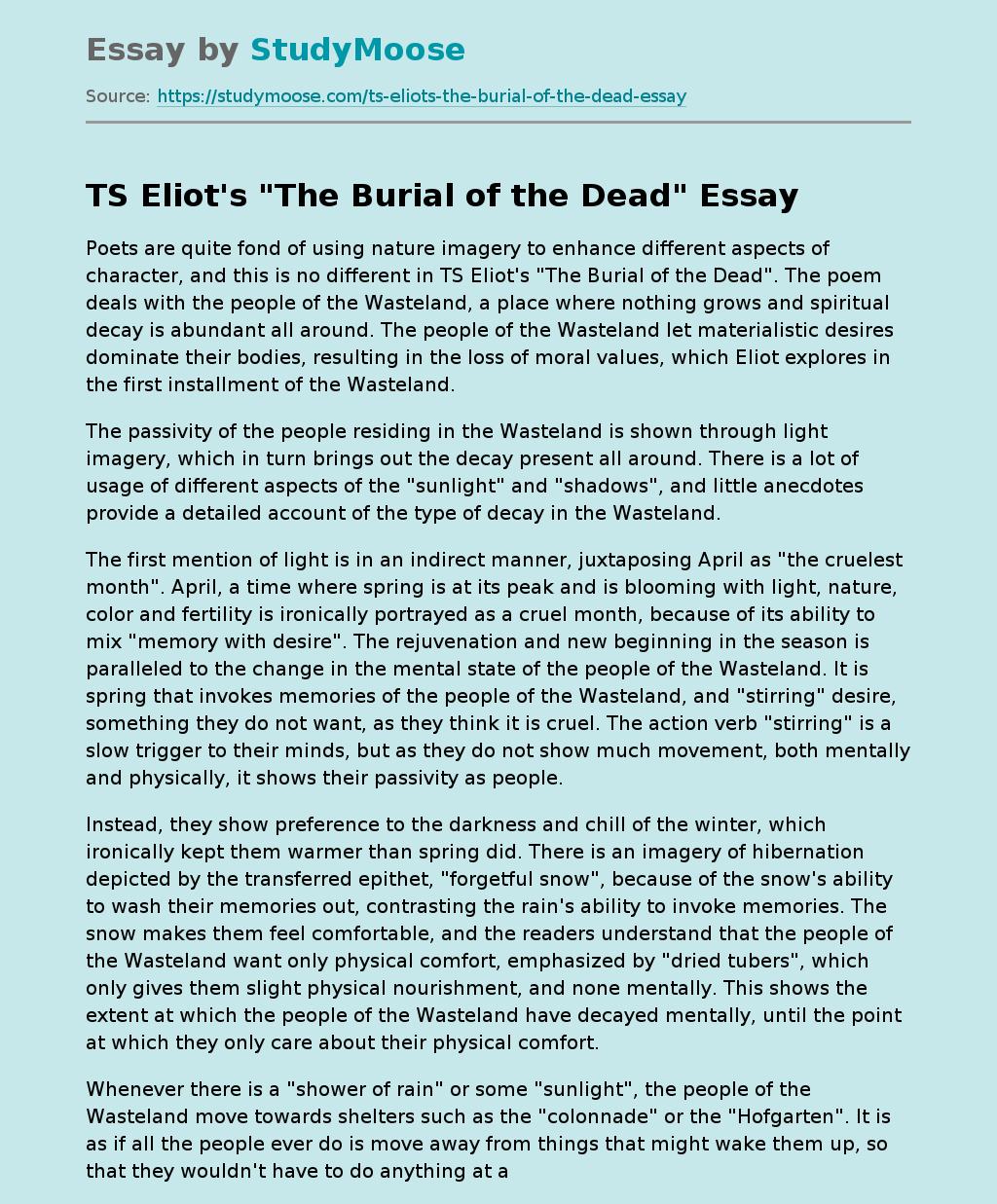