“Long years ago we made a tryst with destiny, and now the time comes when we shall redeem our pledge,” Just before midnight hour on the 14th of August Jawerharlal Nehru, the first prime minister of India, speaks these words of poetry and sends India into its first day of freedom.

The speech Prime Minister Nehru gives in August 1947, which makes India a country of its own and frees it from the English rule. This speech differs from so many others speeches given by prime ministers all over the world, because Nehru does not bring that many political factors into it.

Don't use plagiarized sources.
Get Your Custom Essay on Tryst with Destiny Just from $13,9/Page

In fact this speech seems more like a piece of poetry celebrating India as land of beauty and its people capable of standing united and achieve greatness.

Though the speech is poetic, so much that you might forget its purpose, if you look closely, you can see that Nehru is not only praising his country and countrymen, but is using clear technics to draw in the people of India and to stand united as this new nation.

As a very clear example, that fills most of Nehru’s speech, is the poetics phrases that Nehru is constantly using. This poetry and plans for the future, brings India together by giving them something to stand together about. Nehru goes specifically after this, when he calls India “she” in the sentence “Through good and ill fortune alike she has never lost sight of the quest or forgotten the ideals whish gave her strength” Nehru gives India a well-deserved boost of national felling and confidence, which was much needed since India might have lost that feeling after the long years as a colony and the devastating war that had just past.

This feeling of nationality sprung from the appeal of pathos. Again notable when Nehru calls his listeners “brothers and sisters”, even if they are now two countries, Pakistan and India. Talking to the emotions of the listeners, which characterizes Nehru’s speech, overshadows the lack of solid politics. It shows that Nehru is not in a hurry to make political promises. The only real political element in the speech is his want to fight poverty and disease, this speaking to the ethical element, ethos. But otherwise Nehru takes his time in summarizing, what India is all about.

By telling is wonderful, poetic tale of India Nehru uses many metaphors. First, calling a country “she” is a clear metaphor. The country is neither female nor male. He uses a metaphor again in the first part of the speech, when he says: “India will awake to life and freedom”. Again, it is metaphorically meant. The poetry comes to mind, when Nehru compares India newfound freedom with: “A new star of hope and freedom”. Many metaphors can sometimes get lost in the lyrics, but Nehru gives the listeners such clear images, that it cannot help but plant a national feeling in your heart. And along with that, hope. 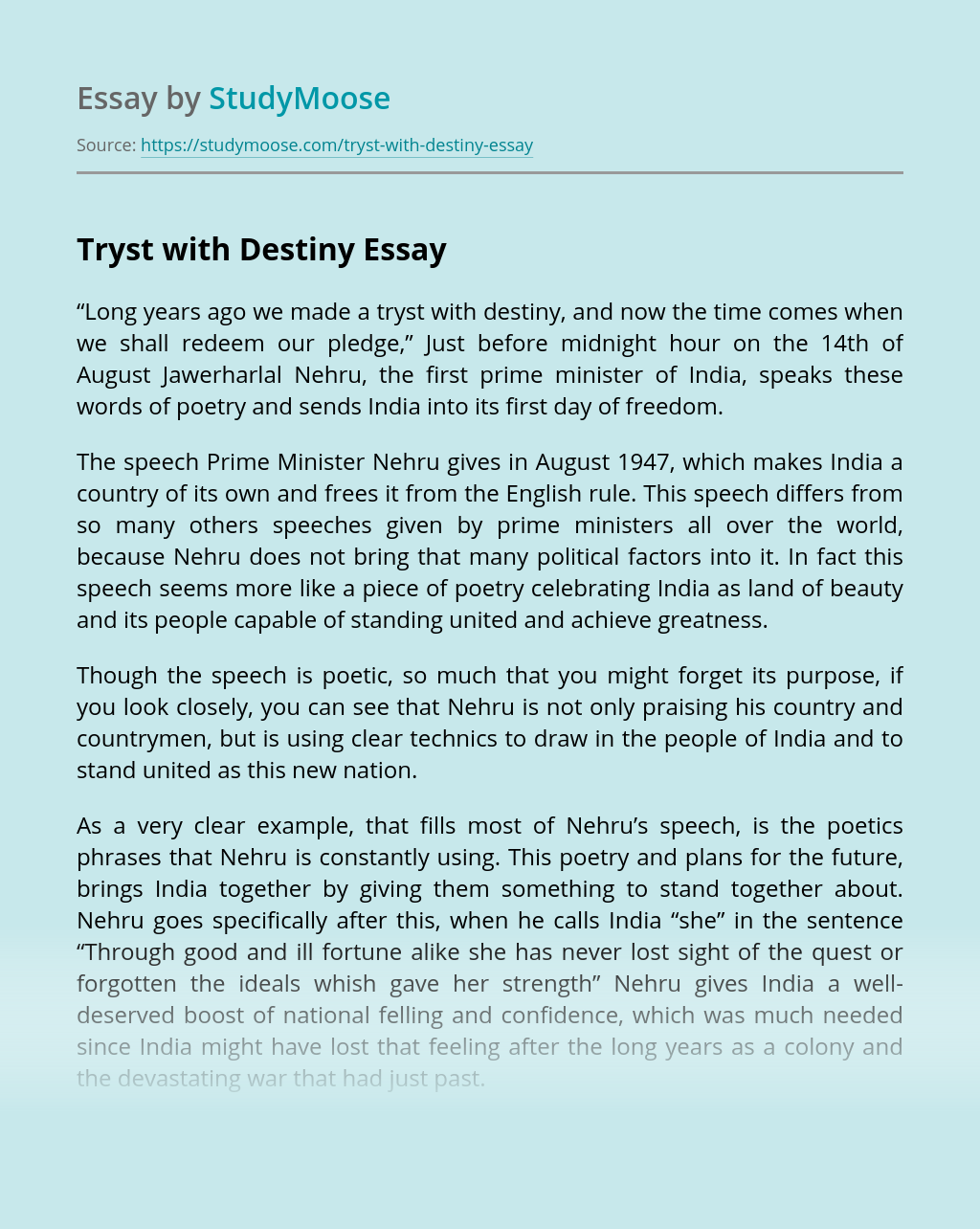 Operation Barbarossa, also called Operation Fritz, during World War II, was launched on June 22, 1941, and ended on December 5, 1941 (period of 5 months and 2 weeks). This battle occurred in Russia towards main cities that consisted of the Soviet Union: Leningrad, Moscow, and Stalingrad. The main leaders and generals were Adolf Hitler,...

A. A landslide is when a mass of soil, rocks and other debris moves down a slope, powered by the force of gravity. Sometimes, this movement is so sudden and rapid that it causes devastating loss of life and structural damage. (http://www.health24.com/medical/Condition_centres/777-792-1461-2097,34702.asp) B. A landslide or landslip is a geological phenomenon which includes a wide...

Thesis Statement: The Dictionary of Canadian Law defines the term “freedom of expression” as “Permitting free expression to the end of promoting truth, political or social participation, and self-fulfilment. That purpose extends to the protection of minority beliefs which the majority regard as wrong or false.” R. v. Zundel. It was fair Unlawful Profile of...

Tuesday Siesta- the masterpiece composed by a Latin American writer, Garcia Marquez, speaks volumes about  the author’s sensitivity and hence justifies its popularity.  Marquez considered it to be his best story. The short story is an excellent example of the Iceberg Technique typically associated with Hemingway. Just like an iceberg it  reveals only a part...

[Chapter – 1]INTRODUCTIONIntroduction: -The plants are important in fulfilling the basic requirements of human being like food, cloth and shelter. Need of food is to survive the human and other organisms worldwide. They supply primary nutrients like protein, carbohydrate, lipids, vitamins etc. and complete energy demand by human being.Worldwide large numbers of plant species and...