The researcher will try to expose that feelings are not shown with words but with actions. No one can deny that true love between a father and a daughter is something really wonderful. In King Lear, the King’s youngest daughter, Cordelia, gives us the real meaning of love from daughter to a father. The reader will understand that by comparing the words she said when her father asked her to profess her love to him and she answered simply “I love you because you are my father” with her sisters` long speeches of love.

Don't use plagiarized sources. Get your custom essay on
“ True Love in King Lear ”
Get custom paper
NEW! smart matching with writer

Also the reader will realize the true love is not said but it is felt, where it was appeared when King Lear divided his kingdom between two daughters and ignored Cordelia because she was not able to express her love. Purpose: The researcher’s goals are to explain the true love and passion, also to show that the true love does not vanish from the heart even if a person is treated badly by the person he loves.

Through the research the researcher will try to correct and confirm the real meaning of true love which is expressed by deeds not with words and to show how the expressions of feelings in actions rather than words can increase the love and peace we give each other. The reader will discover that one who loves you is the one who speaks more is not necessary true . And to correct the idea it is not what we say; it is what we do that shows us who we really are.

And the research will raise awareness that would help people to comprehend that feeling not only by words because true love can never be described merely by words alone. Significance: In King Lear, Shakespeare addresses the issue of true love. Nowadays most of people do not know the means of true love and we desperately need this love to do a lot of things together to make this world a better place for us and also to learn how to express our feelings in an effective way without hurting each other’s feeling.

People will be able to differentiate if they listen to their hearts and know that what people say about love may not be linked to love. Because the words will never be a true measure in the expression of love and the reader will understand this . In this research the researcher hopes that people understand how they can love and respect other people even if some of them tend to treat us badly at times. When the people can control their feelings and express them through proper actions, I believe their friends and colleagues can better understand them. Literature Review:

True love is a central element in King Lear and is formed by Shakespeare who presents the real meaning of true love and loyalty as opposed by selfish love. The reader will realize the same thing that King Lear discovers in his life, the real meaning of true love is through deeds not with fake words. People will be able to differentiate if they listen to their hearts and know that what people say about love may not be linked to love. The parent-child realationship in King Lear shows us tragic ending to the poor heroine,Cordelia, who pays the price for the father`s misjudjment .

The lesson that Lear learns about the true meaning of love is too late because he loses the only person who loves him . Stephen Orgel adds a further insight to our understanding of the Cordelia character and how she embodies the true love in King Lear: CORDELIA. You have begot me, bred me, loved me. I return those duties back as are right fit: Obey you, love you, and most honor you. Why have my sisters’ husbands if they say they love you all? Haply, when I shall wed, that lord whose hand must take my plight shall carry half my love with him, half my care and duty.

Sure I shall never marry like my sisters to love my father all (1. 1. 106-115). The image that the writer used in his book describes one of the only genuinely principled characters in the play. But she does inherit some of her father’s features – she inherited his pride and, like her father, she can be headstrong. Many articles display “Cordelia analysis”(2010) by Ph. D. and Masters students from Stanford, Harvard, and Berkeley; a perfect description of Cordelia who forgave her father after he discarded her ecause she did not like to hear him empty words of tongue and only love in her heart, who unlike her two sisters that they flatter their father and then throw him out of the house once they’ve got his money. And Cordelia’s honesty and integrity contrast with her sisters’ selfish insincerity. ” Lear’s character, his rash haste, his violent impetuosity and his blindness to every thing but the dictates of his passions or affections that produces all his misfortunes, that aggravates his impatience of them, that enforces our pity for him”.

This point has already been argued (Hazlitt: 12-18) . Also, about Lear’s character in King Lear: The Attack on Fatherhood and the Destruction of Hierarchy by Mitchell Kalpakgian Simpson College. Lear discovers the meaning between sentimentality and love, between insincere words and just deeds, between selfishness and selflessness. Cordelia, however, honor the bond between father and child and continue to perform their filial duties, even though has suffered injustice from the blindness of their fathers’ rash judgments. In “Shakespeare’s King Lear – Cordelia and King Lear. (2008) in which Ryan Cutts discusses the parent-child relationship are so important to the meaning of King Lear, though Lear shows that he misunderstands the way in which a daughter’s love to her father should be expresses, and fundamentally misjudges Regan and Goneril, taking their flattery at face value.

However, if he misjudges those two, his judgment of Cordelia is something close to a crime. And in Webster’s Random House College Dictionary defines “love” as, “a feeling of warm personal attachment or deep affection. According to this definition, there is much love displays in Shakespeare’s, King Lear. However, the debate between love and true or real love remains. It can be says that all three of King Lear’s daughters loves him, however, only Cordelia truly loves him. It can be argues that Lear loves all three of his daughters, but by the end of the play, it is painfully clear that he only truly loves Cordelia. According to these diverse sources, all agree that the inability of Cordelia to express her love for his father did not like what King Lear understood as a lack of affection.

But entirely contrast , it is real love- rare type does not exist anymore it died and buried with the faithful daughter . In this research, the researcher is trying to increase awareness and understanding for people to understand that love is not just a tune you can create without a musical instrument . Unfortunately,till now there are people deceived by the flowery words like King Lear did. The research supports the effectiveness of understanding the real meaning of true love. 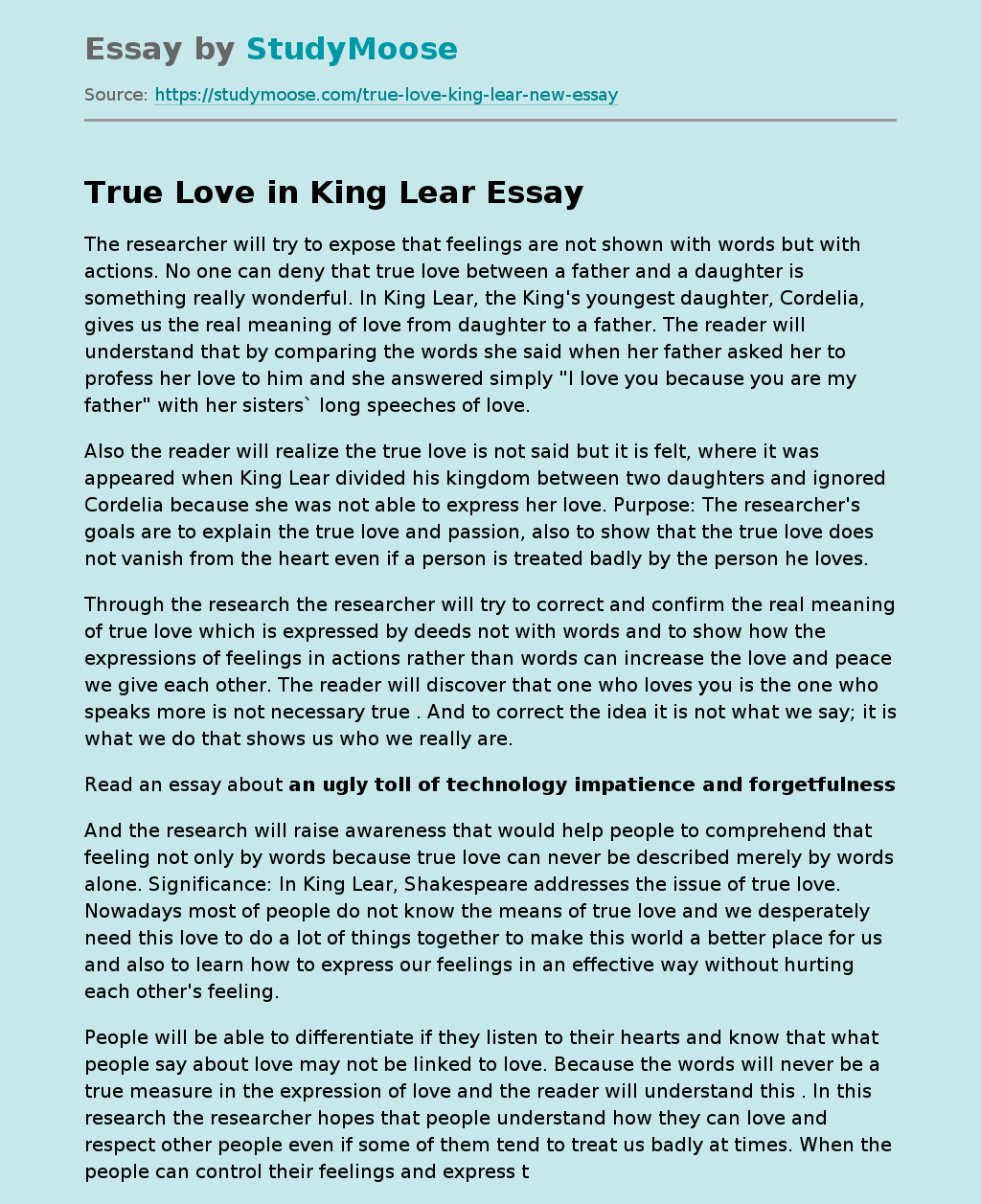