Hurricanes have different names, but their proper scientific name is a tropical cyclone. Depending on where you live hurricanes go by different names. For example, in the Caribbean, and North America they call them hurricanes, as opposed to in Southeast Asia they go by typhoons. Hurricanes require warm water to form which is why they usually form over tropical oceans causing a storm to form. One single storm can reach up to hundreds of thousands of square miles and have interior winds from seventy-four to over one hundred fifty-five miles per hour.

Don't use plagiarized sources. Get your custom essay on
“ Tropical Cyclone – Hurricane ”
Get custom paper
NEW! smart matching with writer

Hurricanes usually leave disasters behind them causing a lot of damage because of the flooding, and the storm surge meaning that the ocean level rises at the coastline due to the power of the storm not only does the water do major damage, but so does the wind. The wind may also cause damage by toppling thing over like trees, light poles, and street signs.

The aftermath that hurricanes leave is tragic not only do they flood and damage the place in where it hits, but the people that live there loose they belongings and sometimes even their homes.

Which is why if you live near tropical oceans it is advised to be alert and watchful of the weather in your hometown that way you could be prepared in the event that a hurricane may hit by securing your home by boarding up windows, and also knowing where to go in the event of an evacuation. The people are usually informed if a hurricane is coming that way they can be cautious, and well informed if they are going to be hit.

Usually the National Hurricane Center is responsible for forecasting all tropical cyclones activity in the Atlantic and Eastern Pacific basins around North America. Meteorologists usually use satellites, reconnaissance aircraft, Ships, buoys, radar, and other land-based platforms to keep track of any oncoming hurricanes. They start by measuring around the storm so they can know the miles per hour the wind is coming in.

Once meteorologists see that the hurricane is about one day or two away from landing, they start to alert the people so they can be prepared in case the storm hits. They usually use special computers to help them guess how the air will move and how the hurricane will move in that stream of air. Once the storm continues downward it will probably move into a pool of water that seems to have no direction to it which causes the hurricane to be unpredictable. There are many types of hurricanes some more dangerous than others. They are usually categorized according to the speed of their sustained winds. The first type is the tropical depression which usually forms when a low pressure area is accompanied by thunderstorms that produce a circular wind flow with thirty-eight miles per hour or less. The second type is the tropical storm with a maximum wind gust of thirty-nine and seventy-three miles per hour, they usually occur when cyclonic circulations becomes more organized. The third type of hurricane is the category one hurricane with winds of seventy-four to ninety-five miles per hour. This hurricane does not do any damage to buildings, but it does damage mobile homes, signs on the street, and causes some coastal flooding. Examples of category one hurricanes would be Irene which happened in 199 and Allison in 1995.

Examples of this hurricane is Andrew (1992), and Camille (1969). The formation of hurricanes start by getting heat off the ocean, and warm, moist air begins to rise. Once it starts rising clouds start to form and instability in the upper atmosphere. The air that is going up begins to spiral in towards the center of the system and this causes the seas below to become fierce, then huge amounts of sea spray are snatched and hanging in the air. Once this happens the eye of the storm starts forming by the vortex of the wind, water vapor, and clouds spinning at an increasing rate. The eye which is usually at the center of the hurricane experiences only light wind and fair weather making it a calm area. As opposed the eyewall which is the area around the eye is where the most violent activity happens. In the eyewall the spiraling air goes up in temperature and the moisture becomes more dense, and compact turning it into droplets that form rain bands and clouds. This process is called condensation which is where latent heat is released causing the air to rise and form more condensation. Once this happens the air starts to rise rapidly resulting in an area of extremely low pressure near the storm’s center and depending on how low the pressure is it indicates whether the storm is severe or not.

As the air is moving higher to up to fifty thousand feet it is then send outward in an anticyclonic flow and at the same time some of the air moves in and into the eye. This compression in the eye causes the temperature to go up. This warmer air can hold a lot of moisture, and the water droplets in the central clouds evaporate and as a result, the eye of the hurricane becomes almost cloud free. In the middle and upper levels of the storm, the climate in the eye becomes a lot warmer than the outside. Therefore, a large pressure differential develops across the eyewall, which helps to produce the violence of the storm.Hurricanes at times can be unpredictable and one of the deadliest natural disasters which is why if you live in a place that is prone to hurricanes you need to keep an eye out especially during June to November which is when hurricane season happens. As you now know you have an idea of how they are formed, and the different types of hurricanes that exists which, is mild to severe hurricanes that can cause a lot of damage. This is why you need to be vigilant in case that the place you live in is issued a notice that a hurricane is coming. 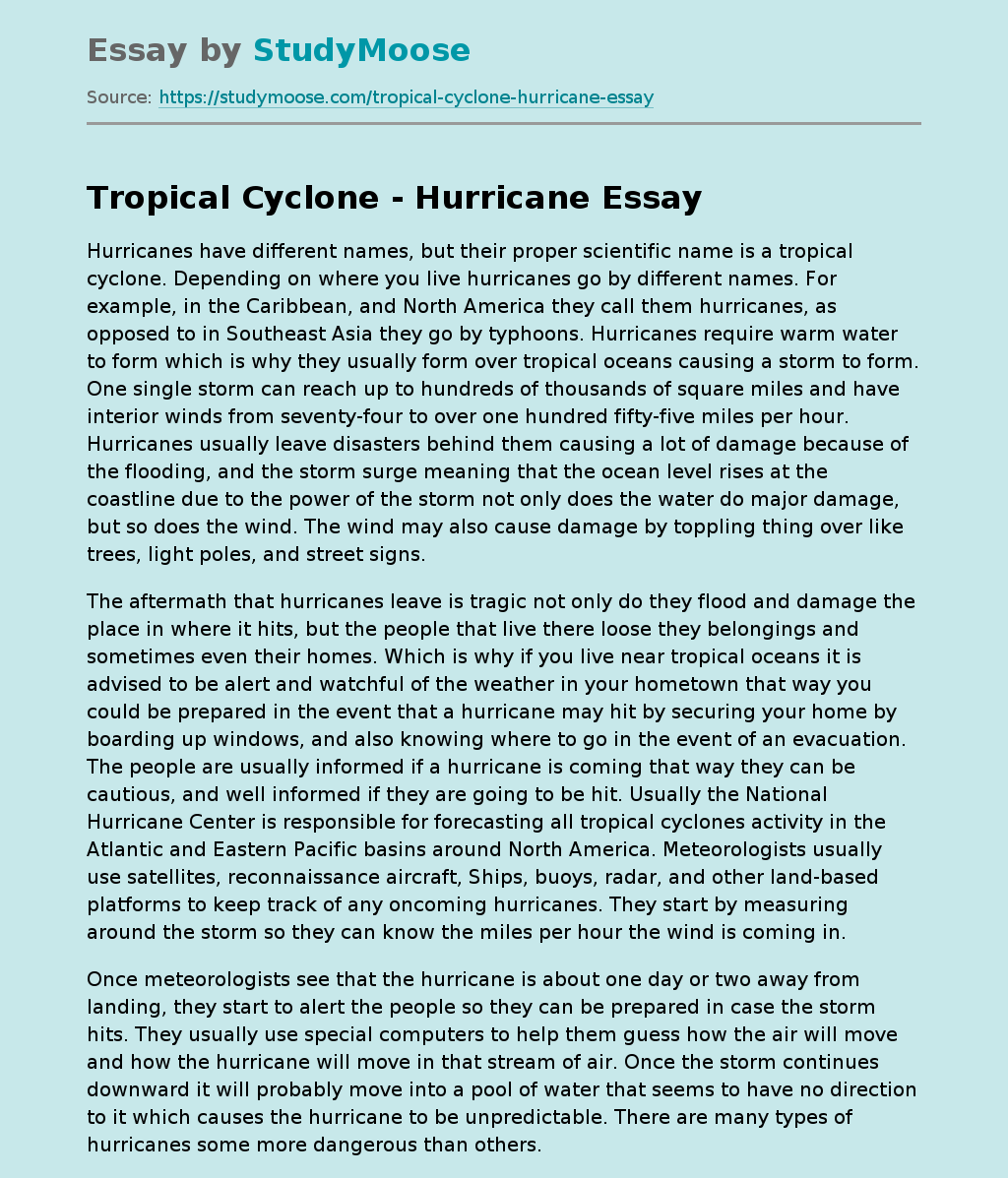