In the poem Dulce et Decorum Est, the author Wilfred Owen is trying to convey and express the horrific images and the physical appeal of the first world war by showing the awful terror and atmosphere of what Owen experienced and suffered through. When you read the poem you can feel the ambience and atmosphere that’s he is trying to show us. You can automatically feel the emotions and pain that he went through, it makes you feel disgusted, shocked and terrified.

Don't use plagiarized sources. Get your custom essay on
“ Trip through First World War in Dulce Est Decorum Est by Wilfred Owen ”
Get custom paper
NEW! smart matching with writer

You can picture everything in your mind and imagine it all, all that panic and abhorrence they experienced and when you read the poem it takes you there. The title of the poem “Dulce et Decorum Est” is Latin for “It’s sweet and right to die for your country”, just like in the last verse of Dulce et Decorum Est “The old lie: Dulce et Decorum Est” Witch was aimed at a propagandist called Jessie Pope. She had written the poem: Who’s for the Game, for the sole purpose of getting young men into war, making them believe that it’s a great honour and that it is great, but the truth is in Wilfred Owens poem.

At the beginning of the poem Wilfred Owen writes “Bent double, like old beggars under sacks” witch reflects the movement of the soldiers, like there dragging themselves and forcing themselves to moves because they are so tired and exhausted. Referring to the word “like” used in that verse is a Simile, expressing how tired and fed up the soldiers are.

“Knock- kneed, coughing like hags, we cursed through sludge” explains how the soldiers were in horrid pain as they dragged there painful bloody feet through the thick mud whilst coughing sharply from the smoke. There he uses alliteration: “Knock-kneed” having the knees abnormally close together and the ankles wide apart, like a faltering march.

“Till on the haunting flares we turned out backs” The soldiers are returning to the barracks and camps, “haunting flares” the terrifying lights that signal for the soldiers to attack or to signify that someone needs help. “And towards our distant rest began to trudge” The soldiers are restless and they are very far away from camp and closer to death, it’s almost like they are walking to their death. “Began to trudge” they are marching slow and helplessly through the sludge in the trenches, because the trenches back then were soggy, moist and watery, so it was hard to get through them.

“Men marched asleep.” Which is a metaphor and a alliteration. The horror of men as if they were dead, they are so exhausted and fed up. “Many had lost their boots” The soldiers had lost their boots from the thick sludgy mud they had to march through. “But limped on, blood shot” Explains how they have lost their boots and their feet are injured and bleeding. “All went lame; all blind;” The soldiers can’t walk properly because their feet are injured and they are so traumatised it’s like they are blind, they are not paying attention and they are emotionless. “Drunk with fatigue” Means that the soldiers are so tired that it’s almost like they are heavily drunk and overflowing with exhaustion. “Deaf even to the hoots” means that they are deaf from all the loud noises from the bombs, guns and gas shells, “Hoots” the

Noise made by the shells rushing through the air (“Of gas shells dropping softly behind”). “Gas! Gas! Quick, boys! “(Caesura) the soldiers are shouting and panicking. Poisonous gas from the gas shells, it fills the lungs with fluid as if the person was drowning. “An ecstasy of fumbling” The soldiers are intensely struggling to get there gas masks on as fast as they can.

“Fitting the clumsy helmets just in time;” The soldiers have managed to put there gas masks on just in time. “But someone still was yelling out and stumbling” One of the soldiers did not manage to put his gas mask on in time, so he starts to scream and stumble. “And flound’ring like a man in fire or lime…” Owen watches his fellow soldier struggling helplessly inhaling the gas. Lime, or quicklime, is a chemical compound that can burn through the human body, like fire. “Dim, through the misty panes and thick green light” The thick misty green smoke from the gas makes it hard to see and focus through the glass of the gas masks. “As under a green sea” Is a metaphor, saying that it’s like watching someone drown. “I saw him drown” Owen witnesses his friend suffer from the gas, like he was drowning in an ocean. “In all my dreams” Owen describes how he has nightmares; in all his nightmares he could not have possibly imagined this. “Before my helpless sight” Owen feels responsible and guilty of what he is seeing. “He plunges at me,” The soldier dives, falls in front of Owen, showing how desperate he is for help. “Guttering, choking, drowning” Explains the harsh sounds (onomatopoeia) mimicking the actions and the sounds the soldier is making guttering like a candles flame about to go out, chocking on the gas as he drowns in fluids.

“If in some smothering dreams you could pace “Owen uses a direct address by using “you” he is talking about in overwhelming dreams. “Behind the wagon that we flung him in” The wagon that they just threw the dying soldier with lack of care, even though they had no choice. “And watch the white eyes writhing in his face” The soldier writhes in surreal agony. “His face hanging, like a devil’s sick of sin” His face just hanging down with the feeling of death. Owen uses “S” sounds almost like you’re hissing the words out like a snake to make it sound harsher. “If you could hear, at every jolt, the blood” Owen is using another direct address and he means by if you could hear at every shock, rough movement, all that blood. “Come gargling from the froth-corrupted lungs” The soldier is gargling up froth and blood, making harsh sounds, as his lungs are infected and corrupted by the gas. “Obscene as cancer” Dreadful and incurable like cancer, you can’t save him you can’t help him; he is going to die no matter what you do. “Bitter as the cud “Cud like bitter sour vomit.

“Of vile, incurable sores on innocent tongues” Incurable pain and trauma that the war has caused to innocent men, Innocent young men are the ones to be sent to their death without knowing how terrifying reality is. “My friend, you would not tell such high zest” He is directing this at the reader saying you would not tell such enthusiasm. You have no idea what they went through, (I think that part was directed at the Propagandist: Jessie Pope) “To children ardent for some desperate glory” To all the devoted young men out there that believed they would get amazing glory from this pointless war. This emphasizes that the young soldiers are the ones who are sent to die in this war before they are aware of the reality of battle.

“The old Lie: Dulce et decorum est Pro patria mori” I think this is purposely directed at Jessie Pope the Propagandist who wrote the poem Who’s for the Game. She wrote it to enthuse young men to join the army, but Owen writes sarcastically to get his point across by saying that Jessie Pope is a liar. Basically saying you have no right to lie to these men. I really did not think I would enjoy this poem when I heard it was about the war but when I read it, I really understood the point Owen was trying to get across and I really enjoyed this poem so much after studying it and researching it. 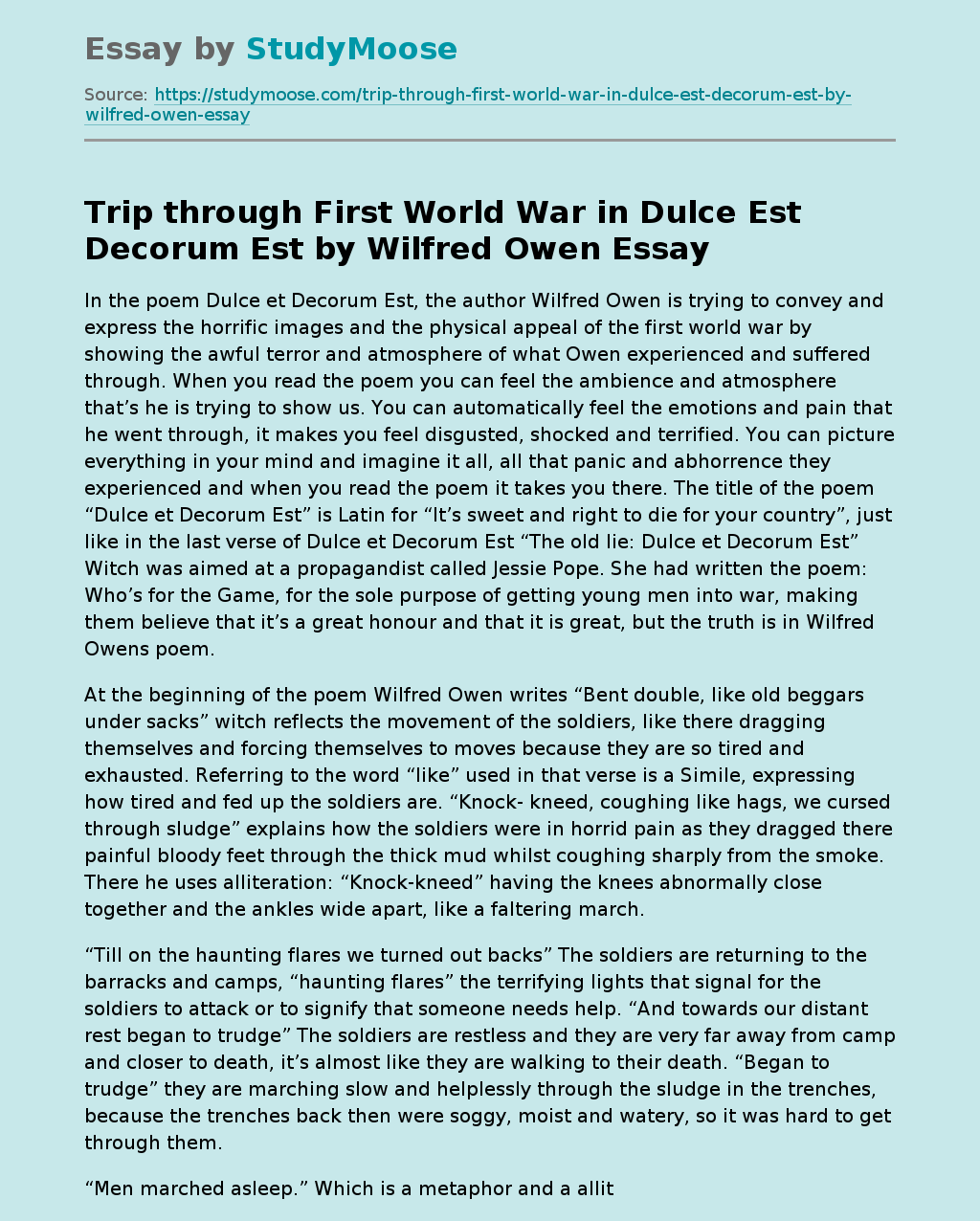